The government’s Information Services Department has barred digital media outlets, such as Hong Kong Free Press, from covering official events related to the anniversary of the Handover. Chinese President Xi Jinping is expected to visit the city around July 1, as it marks 20 years since the transfer of sovereignty to China. Chief Executive-elect Carrie Lam will also be inaugurated as the city’s new leader.

The ISD told HKFP that it is “is reviewing the current practice and is striving to complete the review as soon as practicable. We will communicate with the industry on the outcome and recommendations when available.”

It added that current policies will remain in place until the “review” is complete.

The “review” has been under way for at least six months. It came after the Ombudsman called upon the government to reform its practices and draw up guidelines as soon as possible. The Ombudsman said the guidelines were “vague” and said the industry and the public are given “no clue” about its criteria. Online media outlets were also banned from covering the chief executive elections in March, though all three candidates agreed that the policy should be reformed.

Journalism watchdogs such as the Committee to Protect Journalists, and Reporters Without Borders, have condemned the ban. So have NGOs such as Amnesty International.

On Wednesday, a local press freedom watchdog criticised the policy. The Hong Kong Journalists Association also penned an open letter to the government, expressing concern that the personal details of reporters covering the official events may be shared with the police.

Details of reporters that could potentially be shared with all law enforcement agencies include phone numbers, addresses, dates of birth, and photographs. 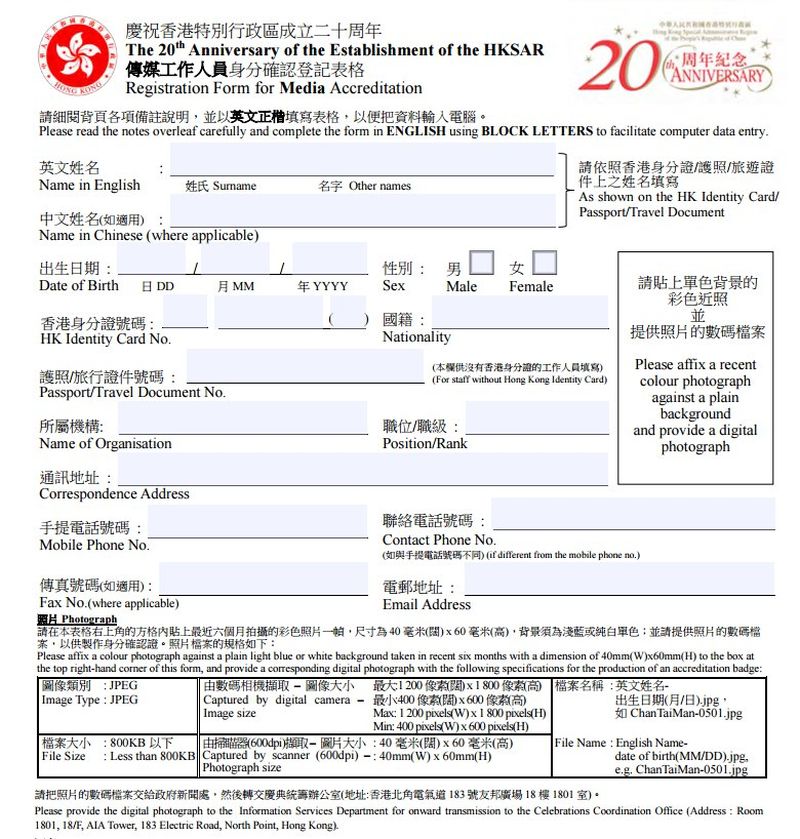 In an emailed response, the ISD told HKFP that “the information provided in the form may be disclosed, as necessary, to law enforcement agencies and/or other relevant departments or agencies of the HKSAR Government responsible for security for identity verification and accreditation purposes. Provision of information is on a voluntary basis. However, if the information provided is incomplete or inaccurate, the person may not be issued with an accreditation badge.”

It said that all information provided in the form will be destroyed upon completion of the events.

See also: Let us report on the election: HKFP and 11 other media groups pen open letter to election candidates

The Association urged the government to drop the requirement: “There is no justification in changing the accreditation practice that has served every party well over the years.”