Holding the double chocolate chip cookie between a pair of metal tongs, the woman behind the counter begins to lower it into a plastic bag.

“Oh! No, no bag, please,” Chung jumps in. The woman freezes. She looks at Chung, the cookie, then back at Chung. Where exactly should the cookie go?

The request causes a stir. Curious onlookers stare, and two businessmen in line behind her whisper inaudibly. Chung catches the words “cookie”, “weird” – and “why”. At 8:55am on a busy Thursday morning, inside takeaway coffee shop Pret a Manger in Kowloon Bay MTR station, Chung was attracting quite the attention with her cookie episode.

But that’s what happens when you’re living the zero waste life, which entails rejecting the use of anything made of material that can’t be returned back to nature or recycled to minimise environmental impact. Chung’s extra challenge? She’s doing it in Hong Kong, a city fraught with plastic waste and frighteningly little concern for where it all ends up.

According to a report from the city’s Environmental Bureau, Hong Kong produces 1.36 kilograms of daily domestic waste per capita, higher than its Asian counterparts and 80 per cent more than the figure 30 years ago. It’s a bold title, but Hong Kong – in all its tiny, tiny glory – was named the most wasteful city in the world by an Organisation for Economic Co-operation and Development study.

A year without waste

Hannah Chung, 30, is challenging herself to live a year without waste. As we sit down for coffee, she tells me about her work as a business developer at plant-based diet advocate and grocery store Green Common, where she’s been the past seven months.

I met Chung two years ago as an intern at a food and beverage publication, where Chung organised collaboration with restaurants in Hong Kong’s foodie scene. Then, I knew Chung as the events manager who, beneath the nice-girl exterior, struggled to reject printed press releases and harboured a secret dislike for establishments that used disposable plastics.

Since then, she’s become far more vocal about her concern for the environment. Chung, who grew up in London and lived in Tokyo for a year prior to her move here, compares the two cities’ environmental awareness favourably to the situation in Hong Kong. In London, she says, there are compost bins everywhere and households divide their trash according to what it’s made of, so what ends up in a landfill or incinerator as actual rubbish at the end of the day is small.

And though Japan is, in her words “the land of packaging”, people take recycling seriously and hold themselves accountable for the harm that they cause to the environment. The difference is reflected in data published in a World Bank report on the amount of municipal solid waste (MSW), or everyday household trash, produced by country. It is predicted that in 2025, Hong Kong will be generating close to 2 kilograms of MSW per capita per day, among the highest on the list, while Japan and the UK’s figures sit at 1.71 kilograms and 1.79 kilograms respectively.

See also: Plastic means prosperity… but we are throwing away far too much of it

Over the past year, Chung has become increasingly aware of just how serious the waste problem in Hong Kong is. The plastic bag levy was passed in 2009, requiring stores to charge 50 cents for those who want their shopping bagged. This encouraged people to carry their own tote bags, but on the whole, there is still little being done.

“One day, I woke up and thought – ‘Why should I live with this?’” Chung recalled. She did some research on people trying out a zero waste lifestyle in other countries and found that there wasn’t really anybody in Hong Kong attempting anything similar. And just like that, on August 10, 2016, Hannah Chung made it social media-official that she was committing a full year to creating as little waste as possible. She started an Instagram account with the handle “@thezerowastechallenge” and announced it to all 738 of her Facebook friends. There was no going back for Chung now.

As with many things, the hardest part of the challenge was the start. Chung had to get used to the multitude of restrictions that were now in her life: she could no longer buy most everyday products, be it food or toiletries, at supermarkets anymore as they come in plastic packaging. She started carrying around a metal tin and utensils in case a restaurant she wanted to eat at only had disposables, meaning she had to remember to clean and pack them in between a quick breakfast and getting out of the apartment on time for work every morning.

“So much stuff around us is packed in plastic,” Chung says. “A large part of this lifestyle is finding, and often, making, alternatives for them.”

Some things are easier than others. Mixing baking soda, coconut oil and peppermint oil to make toothpaste works like a charm, but nine months into the challenge, Chung still hasn’t found a good substitute for a household staple: dishwashing liquid.

“I’ve been using lemon, vinegar, baking soda and tea seed powder,” Chung says. “It does the job, but it takes about five times as long.” 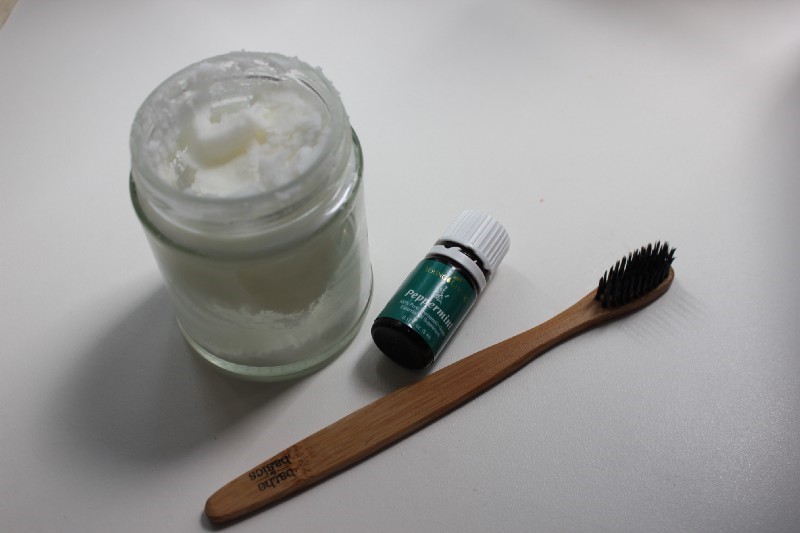 Chung’s commitment to living zero waste speaks loud and clear, and I look down, with slight guilt, at my plastic lid-capped Starbucks cup – made of paper, but like most paper cups, coated in a thin layer of plastic that keeps the cardboard from being soggy, and the cup from being fully recyclable. Across the table, Chung takes a sip from her trusty stainless steel flask.

“It can be frustrating, living with this many restrictions,” Chung says. “I have to remind myself that this lifestyle isn’t about being perfect.” When she ends up with plastic, either because her request for the food to be put into her metal box wasn’t accommodated or simply because she has yet to find a practical alternative for a product, Chung makes sure the plastic is taken home to be reused and recycled.

Since starting the zero waste challenge, Chung has received encouragement from those around her, who agree that awareness of environmental impact in Hong Kong needs to be raised. Many have even been inspired by Chung to do their part, such as by preparing their own food for lunch instead of buying takeaway, and thinking twice before buying anything that comes in excessive packaging.

But alongside the support, Chung detects scepticism from people who just aren’t on the same wavelength. Some say the environmental “crisis” purported by activists like Chung is overblown, while others wonder if she’s making any difference at all. Though to Chung, this isn’t a bad thing.

“When someone asks questions, it gives me the chance to explain why I’m doing what I’m doing,” says Chung. “And that’s better than no discussion at all.” Chung started the zero waste challenge with the intention of finding the most practical way to live waste-free and to create conversation around it. Having found familiarity with a lifestyle most would consider daunting and difficult, Chung has shared her experience and advice with local media outlets and recently at a talk she gave at the Lantau Health and Wellness Expo. With two months left in the challenge, it seems that Chung has by and large succeeded.

We near the end of our conversation. I finish the last of my coffee from my disposable cup, and Chung from her stainless steel flask.

As we get up, I notice the head of a broccoli peeking out of Chung’s handbag. It’s wedged right in there, its florets poking unobtrusively at her laptop, umbrella and cardigan. Chung catches my eye.

Hillary has a Bachelor of Journalism degree with a second major in sociology from the University of Hong Kong. She has experience writing for various start-ups and is also a freelance editor.

Hillary has a Bachelor of Journalism degree with a second major in sociology from the University of Hong Kong. She has experience writing for various start-ups and is also a freelance editor.

The zero-waste challenge in wasteful Hong Kong: Is it possible?