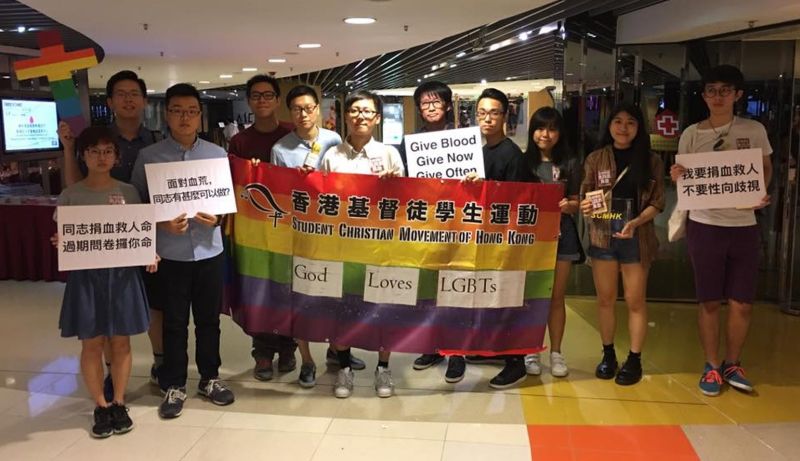 On its website, the NGO cited the heightened risk of HIV among gay males as a reason for the ban: “Individuals engaged in high risk activities such as being sexually promiscuous, having male to male sex and intravenous drug usage should refrain from blood donation.”

But the Student Christian Movement of Hong Kong said in a statement on Sunday that unsafe sex is the main factor causing HIV: “Therefore, it is unfair and unreasonable to specifically target male-to-male intercourse.”

The group led around 10 activists in Sunday’s protest at the Kowloon Bay International Trade and Exhibition Centre – where the NGO was presenting awards to Hongkongers who have donated blood 25 times.

“This stigmatises gay males,” said the group in its statement. “Hongkongers will also follow the Red Cross in stigmatising gay males because of its influence and authority.”

The group recommended that the Red Cross allow gay males to donate blood if they have not had unprotected sex within the previous three months. The Red Cross told HKFP that it had been meeting with different groups to potentially reform the policy.

“The Hong Kong Red Cross Blood Transfusion Centre is considering revising its guidelines permanently prohibiting males who have had sex with males from donating blood,” a spokesperson told HKFP. “The centre will continue to communicate with all stakeholders in order to take their views into account.”

Its questionnaire for prospective blood donors also asks females whether they have ever had sex with a male who has had sex with other males.

According to the Department of Health, the number of new reported cases of HIV in Hong Kong contracted through homosexual intercourse steadily increased over the past decade to a total of 378 last year, compared to 145 cases contracted through heterosexual intercourse. Statistics since 1984 suggest that males in the city are four times as likely to contract the virus.