The fate of the 130-year-old tenement house at 120 Wellington Street will be a classic case for scholars researching the Urban Renewal Authority (URA). The URA’s verdict on the house, which has been left vacant for nearly a decade, demonstrates “dilapidation beyond repair” can mean anything.

The term, coined by the URA to justify demolition, meant “preserving the character” in 2009, “preserving the facade” in 2014, and “preserving the whole building” in 2017.  One is left to wonder why a building’s physical condition improves, rather than deteriorates, as time passes and the property remains unoccupied.

120 Wellington Street is a three-storey tenement house. It is better known as Wing Woo, a grocery that, until 2009, had sold rice, salted eggs, preserved sausage and other foodstuffs in the neighbourhood. It had been operating for more than 80 years. Like many tenement houses in the city’s old districts, the highly valuable land they occupy falls under the remit of the URA. In the case of Wing Woo, the building is within the boundary of the URA’s Graham and Peel Streets redevelopment plan. The URA divided the area into three sites and construction at Site B is currently under way.

When tenement houses are chosen by the URA for redevelopment, their history becomes a liability. Instead of celebrating and preserving their history, stories and wisdom, the URA adopts the phrase “dilapidation beyond repair” to justify their demolition. If the houses were in a good condition, how could the URA demolish them, vacate the sites and tender the land to property developers who pay the highest bid?

In January 2009, despite strong demands from the community to preserve Wing Woo, the URA announced that it would only maintain certain characteristics of the building.  The following is what the URA wrote in its press release: “While the grocery store has rich historical elements, its structure is in dilapidated conditions and it has recently been given repair orders by the Government.” 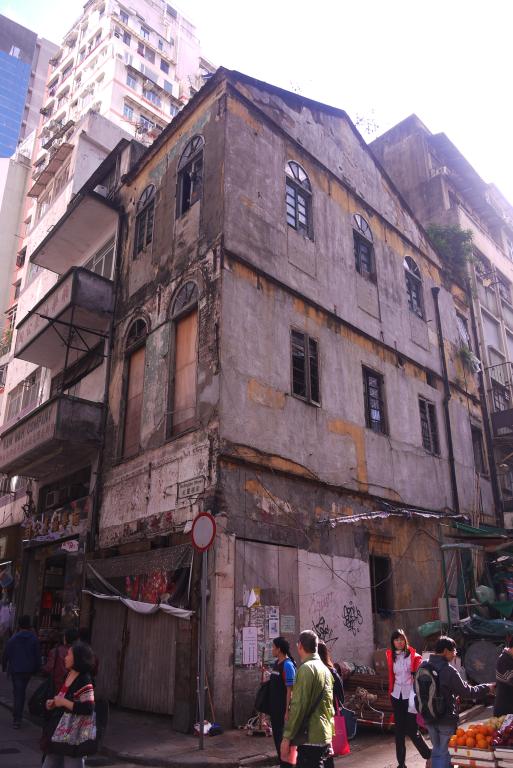 According to the URA, “dilapidation” means that the only preservation possible are photo records and oral history accounts; measuring and recording the interior, exterior and the structural characteristics of the store; turning the site into the entrance of the new “Old Shop Street”; and – when the new shops are in place – large furniture from Wing Woo will be on display there.

Then, in a statement issued in February 2014, the URA wrote: “As the building is dilapidated beyond repair, the URA will preserve the facade of the grocery as far as practicable for adaptive reuse.”

Last month – following the meeting on May 18 – the URA then told the Central and Western District Council that it would preserve the entire Wing Woo grocery.  The preserved tenement house will be home to a new shop.

We cannot know whether Wing Woo will still be selling groceries on Wellington Street. We also do not know why the URA suddenly realised that “dilapidation beyond repair” is no longer a barrier against preserving the whole building. We also do not know, for now, who will have the privilege to rent the shop space. What will be sold in the new shop? Who will be frequenting the new shop?

Hong Kong's Urban Renewal Authority, and the shifting meaning of 'dilapidation beyond repair'