“Calligraphy today is very different to what it was in ancient times,” says young Hong Kong calligraphy artist Packy Lai, also known as The Inkless.

“When we didn’t have pens, we wrote using a brush. At the time nobody called that calligraphy, rather, just characters written as a medium of communication. But this eventually evolved into an art form, because so many different styles of writing have developed, and each style reveals the mental state of the person who created it.”

Likewise, Lai’s calligraphy reveals her feelings about society and the events around her. She considers herself an artist using calligraphy as a medium, rather than a calligrapher – a term that implies the mastery of a skill. 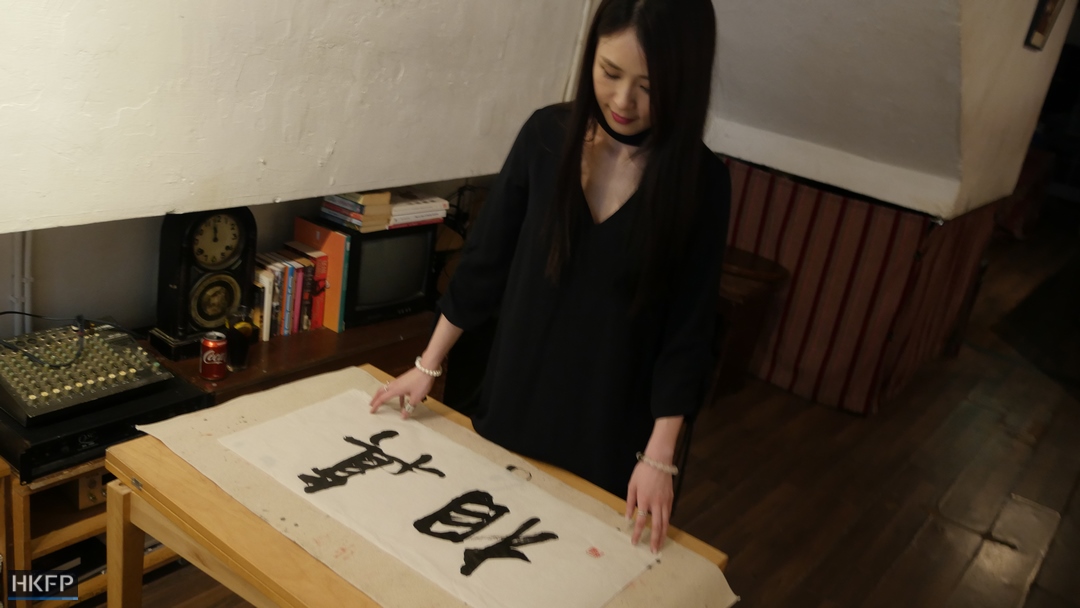 “I want to look at each line and the origins of each character, in order to understand the meaning and history behind it,” she adds.

An artist, not a calligrapher

“Everybody knows how to write, but we feel that calligraphy is something very distant from us, because we feel it’s very impractical – something that belongs in an ivory tower.”

The history of Chinese characters dates back to the 2nd millennium BC, with the advent of the oracle bone script. During the prehistoric Shang Dynasty, the emperor’s sorcerers began carving symbols onto animal bones – a system of writing that evolved into the seal script (zuan) by the time the State of Qin created the first “unified” Chinese dynasty in the 3rd century BC. 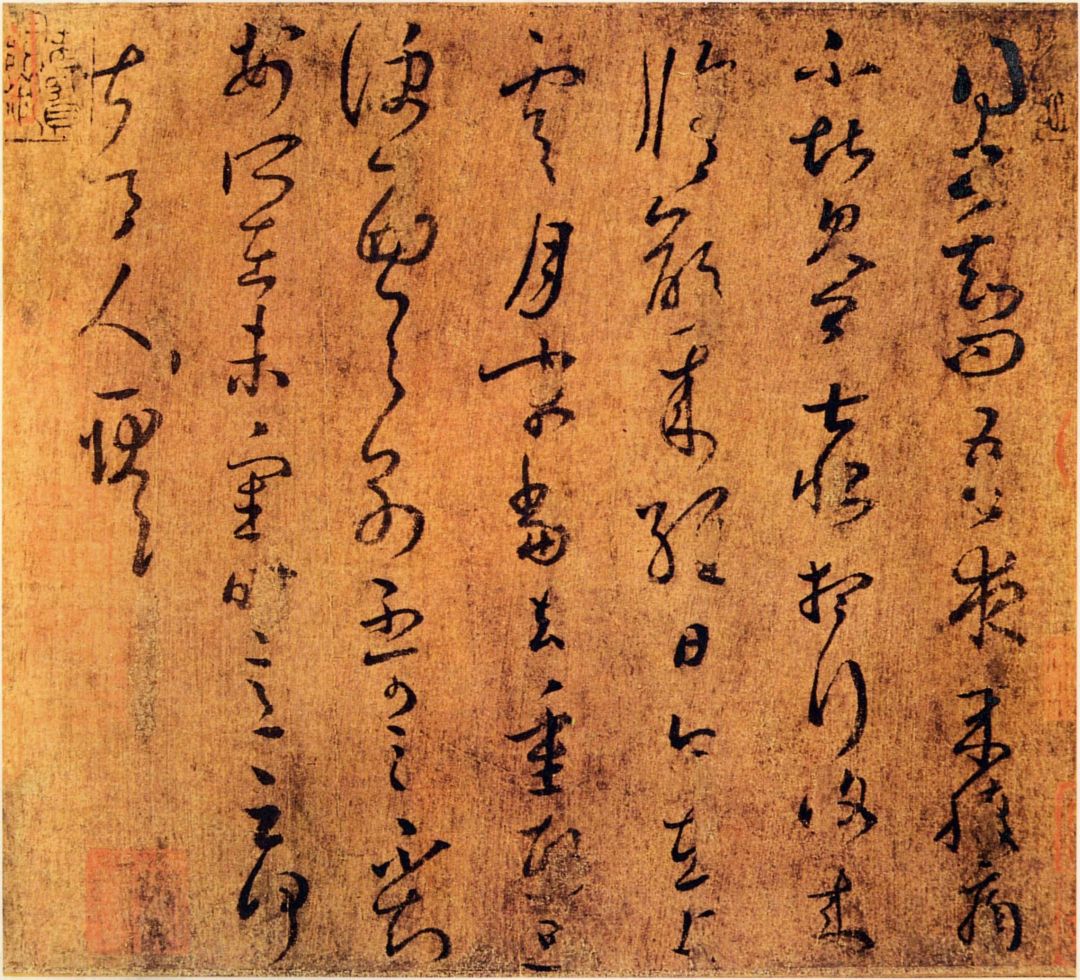 Since then, however, brushes have been replaced by pencils and pens as tools of writing, which were later themselves replaced by interfaces on computers and mobile phones.

For over two decades, calligraphy was simply a hobby for Lai. Spending most of her childhood with her grandparents, she did not have many options for entertainment apart from playing Chinese chess and writing calligraphy – a skill that she first learnt from her grandmother.

“I learnt to write in the regular script first, then the semi-cursive script, and later I imitated the style of Zhao Mengfu.” Zhao was[one of four great classical Chinese calligraphers, from the Yuan Dynasty.

Like most Hongkongers, she then pursued a more typical career in marketing. She says she did not flaunt her hobby, because – having grown up writing calligraphy – it did not seem as special to her as it did to others: “If you know how to knit a woollen sweater, you wouldn’t go around telling people you knew how to do that.” 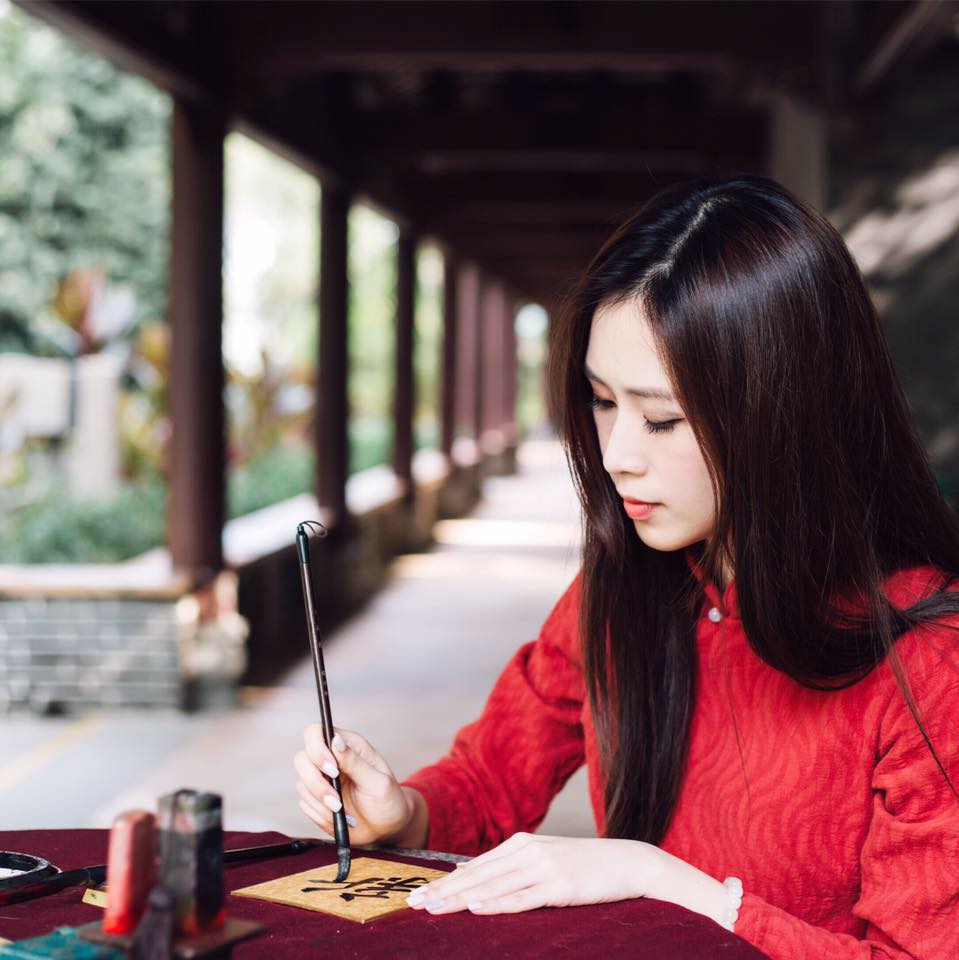 But 18 months ago, she quit her job in order to pursue calligraphy art as a profession. “What I wanted was very simple,” she says, “I just wanted to do what I liked.”

“It’s not as dramatic as how some others put it – as if I was pursuing my dreams or giving up some high-flying career. I didn’t think about it that much.”

Having made a name for herself in the Hong Kong community, she now creates calligraphy artwork for various brands, such as the title art for local film The Mermaid. Although she teaches students for several months of the year only, her Facebook page and blog on online outlet Stand News introduce readers to the cultural background behind calligraphy, and its influential practitioners.

Not skill, but appreciation

Lai emphasises the importance of raising awareness of calligraphy art, rather than teaching pure skill. “Over the past year-and-a-half, I’ve found that the public is actually very interested in calligraphy, and has a strong desire for it,” she says. “But unfortunately most people don’t have many avenues to understand it better.”

“I want to pass calligraphy on, but not in the sense of passing it from one hand to the next,” she adds. “I think before teaching anyone how to write, people have to learn how to appreciate it… It’s not just about Chinese characters written in brushes.”

“If you appreciate a film, you don’t necessarily have to know how to produce one. But once you become interested, you will naturally go and learn it on your own initiative.”

Lai says that the best way of learning to appreciate and assess calligraphy is to observe the works left behind by classical calligraphers, imitations of which are widely available on the internet and in books and museums. Yet she laments that most people only see computer-generated characters in their daily lives.

Launching a Chinese language-compatible Microsoft Word programme today, users are presented with standardised fonts based on certain features of classical calligraphy, such as SimSun, PMingLiU and KaiTi. 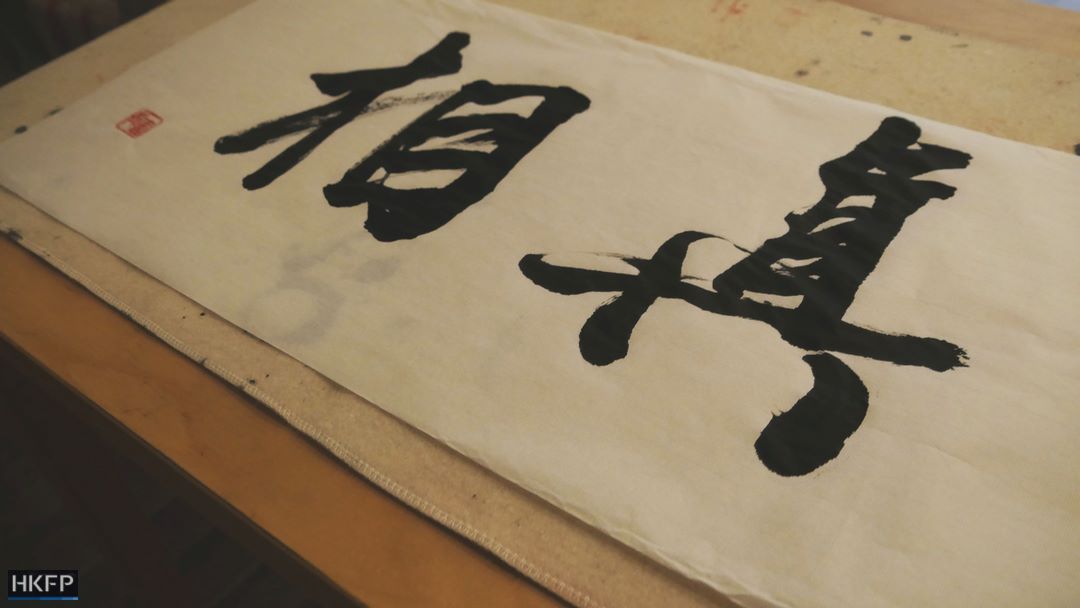 “You can always tell the difference between writings by humans and by computers, because humans have imperfections,” she says. “No two characters written by a human are the same, whereas a computer can print 10,000 identical characters.”

One consequence of the lack of appreciation for calligraphy is the tendency to reduce the written language to the dichotomy of either traditional or simplified Chinese. The former is used in Hong Kong and Taiwan, whereas the latter is used in mainland China and Southeast Asia.

Lai encountered criticism when she posted a work of calligraphy featuring the two characters “simple” on Facebook. Written in cursive script, the characters resembled standard simplified Chinese – a system of writing that evokes fears of cultural influence from mainland China.

“No worries, it’s an opportunity for you to learn how the two characters ‘simple’ are written in cursive script,” she replied to some commenters. 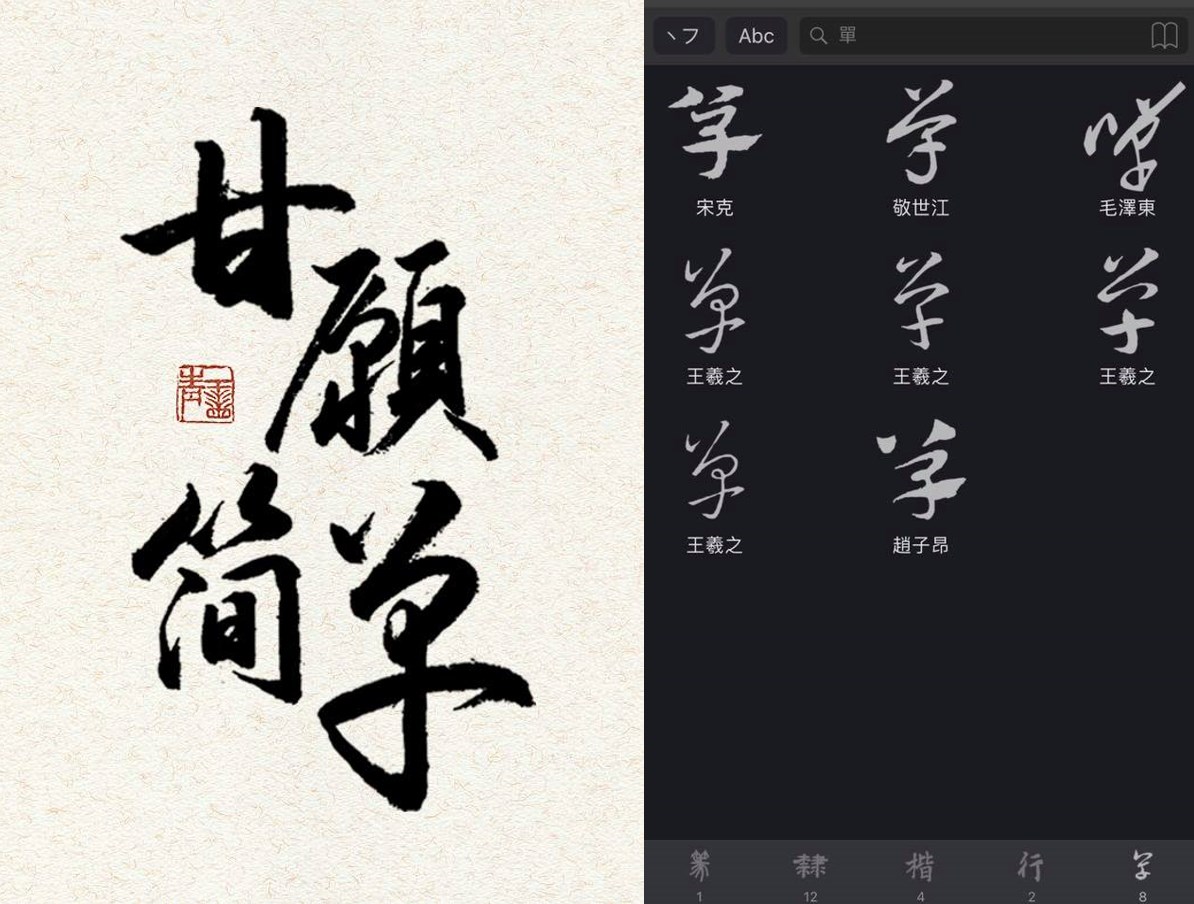 (L) “If you are genuinely willing [to do something], it will become simple”, written by Packy Lai. (R) The second character in the word “simple”, written in different cursive scripts. Photo: The Inkless/Facebook.

“People sometimes think ‘this character is not written in the style that I usually write it,’ and conclude that it is simplified Chinese,” she says. “They don’t realise that a lot of simplified Chinese characters were actually adopted from cursive script.”

“If you don’t inquire why something is different, and you are only against things that are different from yourself, I think society will not improve.”

In Hong Kong today, many parents see calligraphy as a potentially rewarding extra-curricular activity for children, and classes have sprung up across the city. But Lai warns that learning the art will not necessarily improve a student’s handwriting. 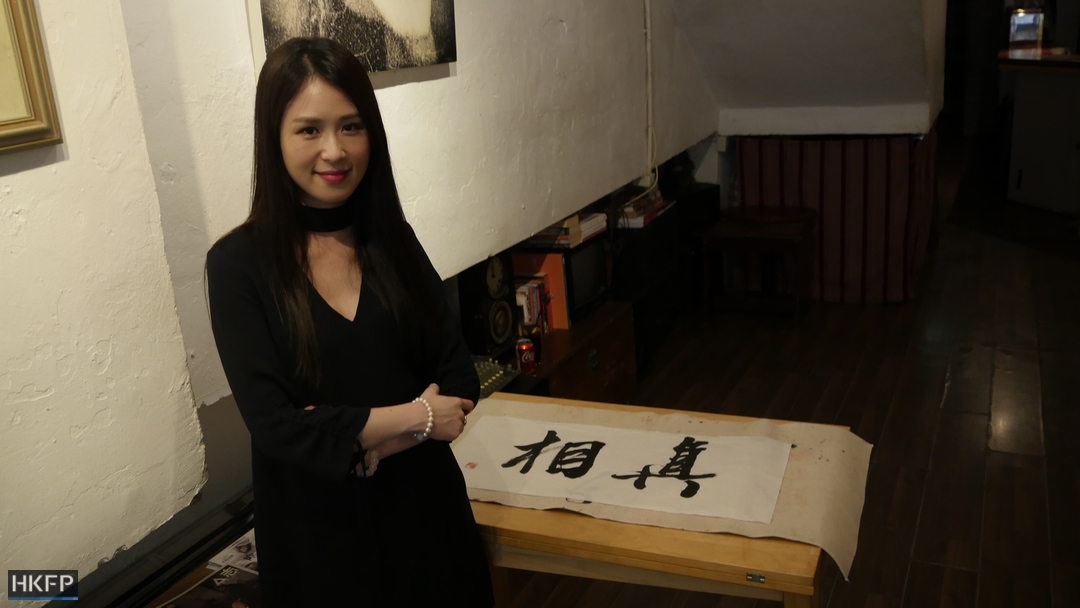 “The brush is a totally different tool from the pen,” she says. “The hand movements are very different, and this would not help you in regular writing.”

Instead, she is adamant that appreciating the art is the most important part of the educational process: “Before you learn to do something, you have to know what it is that you’re learning.”

It's about appreciation, not skill: Meet young calligraphy artist 'The Inkless' Packy Lai