Secretary for Education Eddie Ng has come under fire for skipping part of a public hearing over a controversial school test policy in order to celebrate Hong Kong’s 20th anniversary of the handover with a pro-Beijing business group.

Ng was invited to the legislature’s Panel on Education hearing on Monday. Students, parents and other members of the public gave testimony over the revamped version of the Territory-wide System Assessment (TSA), which has recently been reintroduced to around 500 schools. Ng only sat in on the first session of the five-hour-long hearing. The remaining two sessions were attended by Undersecretary for Education Kevin Yeung Yun-hung.

Both senior officials declined to disclose the details of the event, but a government press release issued hours later showed Ng present at an event celebrating Hong Kong’s handover and the 70th anniversary of the founding of the pro-Beijing Hong Kong Swatow Merchants Association.

“We consider this hearing to be of great significance. We are deeply disappointed at and condemn the secretary’s refusal to attend the second and third sessions of the hearing,” Cheung said in his motion.

The panel passed both motions in the absence of a pro-establishment majority.

Among the 72 people who spoke at Monday’s public hearing, Primary Six student Chan Ho-long said he could not understand why the government insisted on reintroducing the school tests despite strong public opposition. 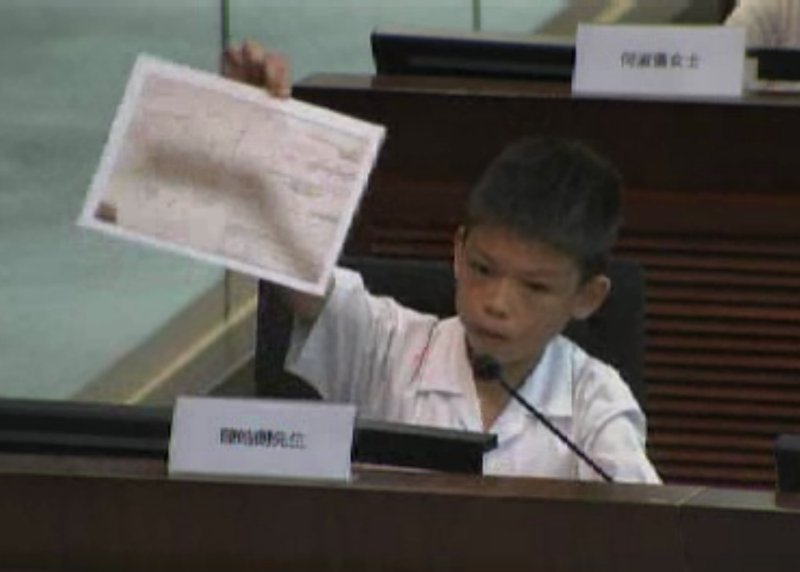 “Secretary Ng, you said students are not required to do homework drills for TSA. But my friend who is in Primary Three was given five pieces of TSA exercises over the Labour Day holiday. He was very upset because he didn’t have time to play,” Chan said.

“As a student, I hope the incoming chief executive and education chief will create a joyful learning environment for us.”

Parent Hui Pui-shan said incumbent leader Leung Chun-ying had no regard for student lives and only cared about saving face. She also criticised pro-Beijing lawmaker Ann Chiang, who chairs the panel, for postponing Monday’s hearing last month while allowing the Education Bureau to invite people on their own to attend legislative meetings.

“We can tell the government is not sincere about listening to us,” she said. “We parents are very disappointed.”

“He has not shown any respect to parents, students or teachers,” Chan told HKFP. “But since the government is reluctant about hearing opposing views, it made no difference to the trauma caused by the TSAs regardless of whether Mr. Ng attended the hearing.” Since its introduction, the TSA and its revamped version, the Basic Competency Assessment (BCA) has been heavily criticised by parents and the education sector. The government uses the test results to review its support for schools. As a result, schools often give students intensive homework drills out of fear that low test scores may affect their funding from the government.

Last month, an alliance of parents – joined by a hundred civil groups – vowed to boycott the TSA policy when schools began rolling out the tests this month.

The boycott campaign also has the backing of lawmakers from across the political spectrum, though the pro-business Liberal Party, pro-Beijing DAB and the Federation of Trade Unions declined to join in.