An investigation by FactWire has discovered that S.F. Express Service Center, the courier service used by the U.S. Consulate General Hong Kong since 2013, lacks appropriate security measures in delivering passports to visa applicants, raising concerns from a security expert about potential threats to U.S. national security. FactWire’s three-day investigation in late April tracked S.F. Express’s entire process of collecting and delivering passports. It found that procedures in the transporting of passports were no different than that of regular cargo and documents. The process began with two S.F. Express couriers entering the U.S. Consulate to collect the passports. They brought a locked suitcase and were unaccompanied by security guards.

The two couriers left the consulate about an hour later. They walked for two to three minutes while holding large amounts of passports before being picked up by a S.F. Express delivery van at a layby in front of St. John’s Building which is opposite to the consulate’s compound. After spending approximately one hour in the consulate, two S.F. Express couriers exit from the side door, preparing to cross Garden Road. Photo: FactWire.

When FactWire journalists asked the couriers what was being transported, they responded, “U.S. dollars! Just kidding, it’s all passports.”
The van then arrived at the S.F. Express Service Center in Wan Chai, one of three locations in Hong Kong where visa applicants can pick up their passports. Approximately 200 square feet in size, the center was unguarded. The couriers carried large amounts of documents from the van into an alley, where they handed the documents over to the center staff. Two S.F. Express couriers wait for the medium-sized delivery van to arrive at the layby in front of St. John’s Building across from the U.S. Consulate. Photo: FactWire. 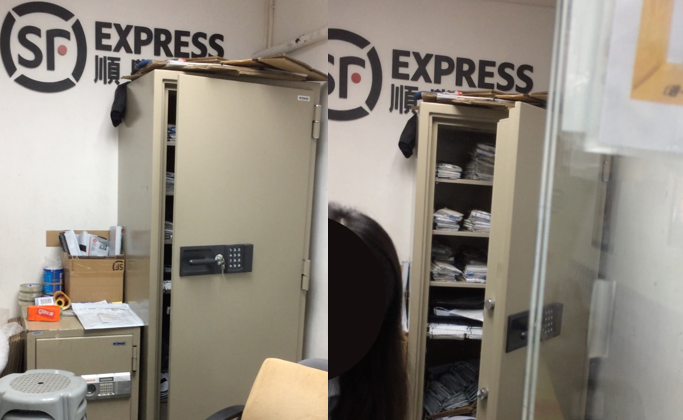 The cabinet safe in the S.F. Express Service Center on Jaffe Road contains approximately 200 passports. It is open and unlocked for long periods of time. Photo: Factwire.

After viewing footage acquired by FactWire, security consultant and former police superintendent Clement Lai Ka-chi, who helped found the Counter Terrorism Response Unit, said, “There exists a very serious security loophole in the transportation arrangements.” Lai commented that criminals can uncover the loopholes through long-term surveillance of the company’s operations, exploiting them to steal passports and visas.

“Quite obviously, the way the couriers only used plastic bags or a suitcase to carry the passports out of the consulate, waiting for the light before crossing the road and then having to walk to the delivery van – that’s already less than ideal,” said Lai. “Considering that these are important documents, the consulate should arrange passageways for couriers and vehicles to conduct a concealed exchange. As for the trip to the service center, there are problems of location and whether the environment is appropriate. The service center can handle collection and delivery of regular packages, but for such important documents, I think security should be strengthened to ensure that these documents can’t be easily taken by someone climbing over the service counter when staff are busy or away from the area.”

Lai further criticized the way the cabinet safe was left open and unlocked: “A safe should of course be locked.”

Lai was trained by the U.S. Secret Service and the International Law Enforcement Academies, administered by the U.S. Department of State. He stressed that the U.S. pays great attention to national security and immigration screening work, adding that U.S. visas are categorized as high-security documents. Because visa holders can enter the U.S. and visas contain many important personal details, if passports with U.S. visas are lost or stolen by criminals, they may be falsified or tampered.

“We’re discussing national travel documents concerning immigration,” said Lai. “I think if these documents are acquired by criminals or even terrorists, the consequences can be very serious. Certain countries have strict controls on border entry and exit. But if it’s so easy for criminals to acquire [these documents], their rigorous screening is wasted. Why not apply the same rigour [to the handling of visas] and increase security measures after documents are issued?” After the delivery van stopped on Hennesy Road, the driver smokes outside, leaving the
passenger car door open. Photo: FactWire.

The mailing service was provided by Hongkong Post for a delivery fee before March 2013. This fee was removed after S.F. Express took over the service.

Records show that before August 23, 2004, the consulate required applicants to collect their documents at the consulate.

FactWire contacted the U.S. Consulate General on Saturday afternoon for a response. Spokesperson Kristin Haworth stated, “We take the security and integrity of our applicants’ visas and passports seriously and apply strict standards for contractors who handle passports.” The Consulate General also said it needed more time to look into the issue and will take steps to correct any issues with the delivery service.

S.F. Express has not responded to requests for comment.

According to the Hong Kong Immigration Department, the applicant must collect the new passport in person at the selected Immigration Office by producing his/her permanent identity card and the originals of supporting documents (if any) submitted in the application for verification.

For applications for a U.K. visa in Hong Kong, applicants are offered to collect visas in person at the visa application centre or have them delivered by Hong Kong Post.