Popular political drama “In the Name of the People”, dubbed China’s “House of Cards”, has hit an 8 per cent TV audience share, the highest in the mainland in a decade, and its 55 episodes have received a staggering overall 22 billion views online since its first episode was aired on March 28, 2017.

The series has broken China’s decade-long ban on anti-corruption-themed dramas being aired in prime time, and is the first television drama to paint a deputy of a national leader as a villain. In the Name of the People promotional poster.

What seems to have hooked viewers is the show’s portrayal of the internal power plays among senior Communist Party officials and their secretive lifestyles.

A State Council civil servant stuffs his apartment with walls of banknotes. A provincial police chief tries to kill his political rival by manipulating a hit-and-run. The son of a deputy state-level leader makes a fortune with the support of old subordinates of his father. A judge is caught in bed with a blonde prostitute. And a provincial security chief is secretly married to his young mistress but he and his original wife still pretend to be a couple.

These storylines are reminiscent of real-life corruption cases in China. In particular, the series’ portrayal of political factions inside the Chinese Communist Party, such as the “secretary gang” and the “political legal gang”, echo real ones that were led by former President Hu Jintao’s assistant Ling Jihua and former security tsar Zhou Yongkang.

Many cultural critics have attempted to explain the popularity of the show. In a seminar, Chinese writer Mei Guoyun presented a drawing that kicked off the discussion. 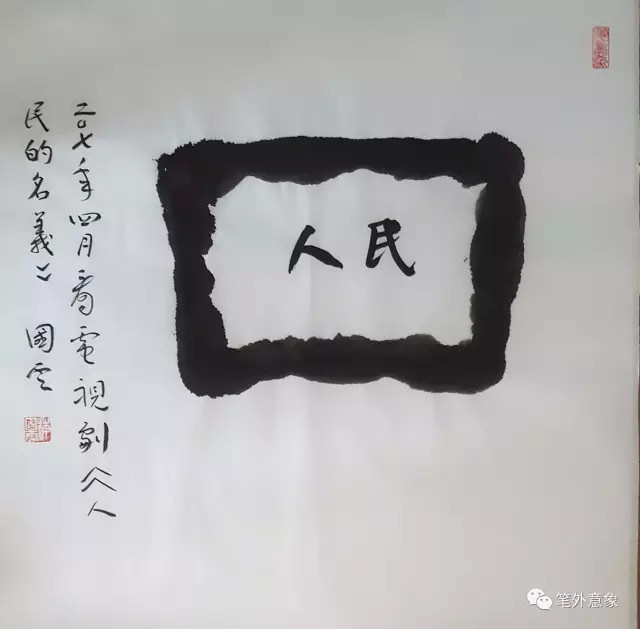 The drawing shows the characters for “people” or renmin (人民) trapped in the character for “mouth” (口). Mei posted the following question in the seminar:

The word “people” is always mentioned by [corrupt and anti-corruption officials]. Who can actually act “in the name of people”?

Wang Meiyun, a researcher at Fudan University, offered her view in the seminar and noted that “people” are actually missing in the series:

Since 2004, anti-corruption dramas have disappeared from prime time TV, which was then occupied by Qing dynasty dramas; writers and directors could only express their views on reality through historical narratives. The messages are usually hidden and blurred and it is very difficult for ordinary people to see the hidden allegories. “In the Name of the People” has become a channel for people to release their disappointment and anger towards reality. They are so eager to watch anti-corruption dramas. At the same time, the theme is in alignment with the [current] government’s political focus, so it was destined to be popular. Though the show’s script is too simple, its theme has covered up its flaws.

One obvious element of the series is that we don’t see many ordinary people in it. All characters, negative or positive, are elites in the government or in the business sector while ordinary people are missing. […] Is the absence of people a hidden irony in the script?

Outside China, drama critics have further dug into the characters of the corrupt and anti-corruption officials depicted in the series. In an anonymous commentary published by Letscorp, a blog that bridges contents between mainland and overseas Chinese regions:

The villains in the drama, Zhao Dehan, Qi Tongwei, and Gao Xiaoqin, all of them were originally the powerless and fought their way to become the rich and powerful. Their motive of taking control of their own fates are shared by ordinary people. On the other hand, the motive of anti-graft characters is to prevent the party and the country’s downfall under the theory that it’s “from the people, to the people”. Such a motivation is far from people’s experience. Only the elite class would suffer from the end of the party regime, not the people.

The corrupt officials are coming from the people, while anti-graft characters are above the people. This is a reality that is captured by “In the Name of the People” and this makes the drama a satire. The children of government and party officials have an easier time getting a good education, finding good jobs and getting promoted in China, while young people from humble families have to struggle to gain a foothold in large cities with expensive homes. Some viewers have been frustrated to see that in show, those challenging these inequities of privilege are depicted as the corrupt.

Below are some critical comments circulated on Chinese social media platforms:

A graduate from a rural, humble family [one of the corrupt officials in the show] was killed by second generations of government officials and revolution leaders [anti-graft leaders].

Many netizens point out a significant fault of the series is that all officials have family or personal relationships, which is almost a textbook example of a hereditary system. Despite the title, the drama excludes the public and has high-ranking officials make decisions for the people, instead of it being up to the people themselves!

Where are the ordinary people in China's hit anti-corruption show ‘In the Name of the People'?