On Tuesday, officials from the Lands Department entered the three villages of Wang Chau in the New Territories.

Escorted by dozens of police officers, they put up notices announcing that the government would requisition the private-owned greenbelt land within three months. Villagers would thus be evicted by early August. 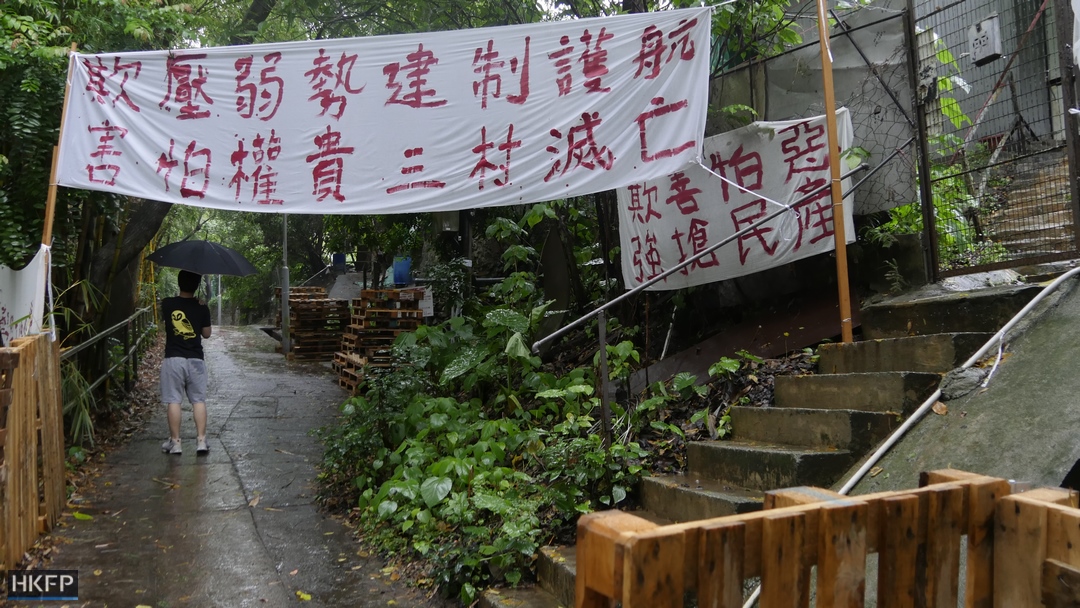 This act caught the villagers by surprise, as the requisition notice had not yet even been filed in the official government Gazette. Officials had originally suggested that the notices would be put up at dawn on Thursday, and the villagers were planning to patrol the village entrances beginning the night before.

Therefore, no journalists or activists were present when one villager was arrested during Tuesday afternoon’s operation.

“Unlike what some media reports say, there were no violent clashes,” said activist Lam On-ki of the Wang Chau Green Belt Development Concern Group. 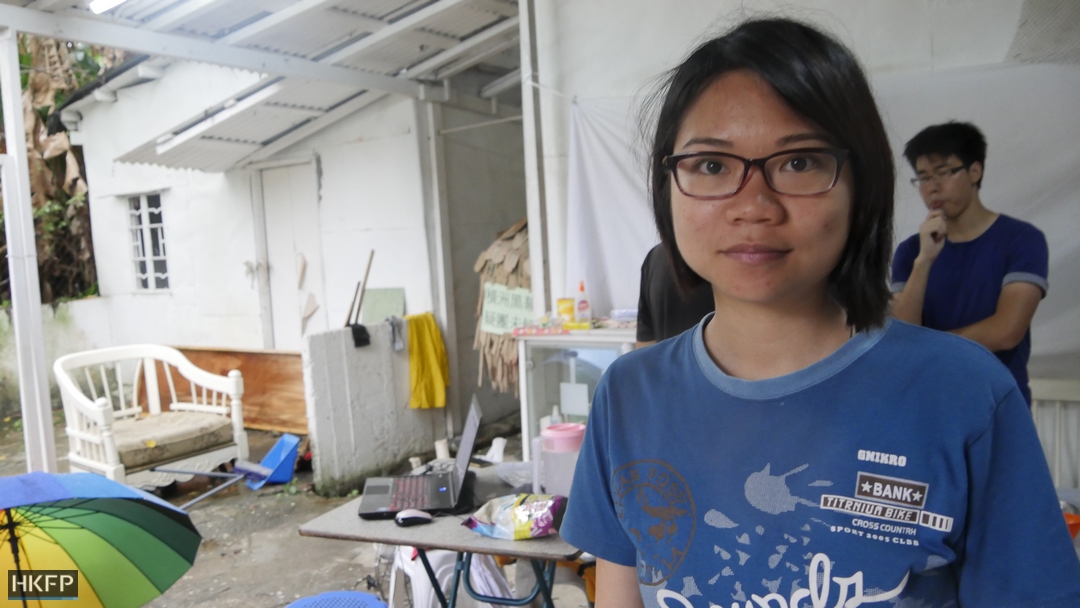 “But for reasons that we don’t know, the police arrested one villager,” she told HKFP. “The current situation is that he has been released on bail, and the police will investigate further.”

It is not the first time the beleaguered villagers have accused the government of taking surprise action. One morning last November, they awoke to find that the Civil Engineering and Development Department had put notices on their doors overnight, announcing roadworks and construction.

The concern group has accused Lands Department officials of posing as journalists or relatives in order to enter homes, creating a tense and fearful atmosphere at the villages. 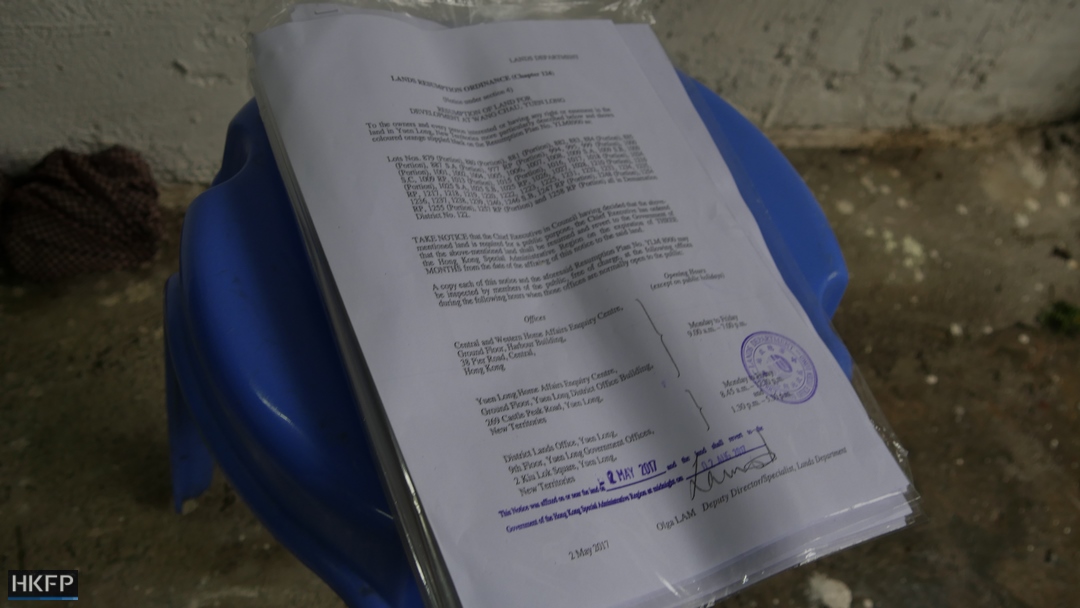 Land resumption notices put up on May 2. Photo: HKFP/Elson Tong.

The Lands Department, however, told HKFP that the Lands Resumption Ordinance did not require officials to announce a requisition of land in the Gazette before putting up eviction notices.

Located at the foot of a small hill in Yuen Long, Wang Chau has been the centre of a political saga for months. Five years ago, the government proposed building public housing on a nearby brownbelt site, currently a storage facility owned by a local strongman. 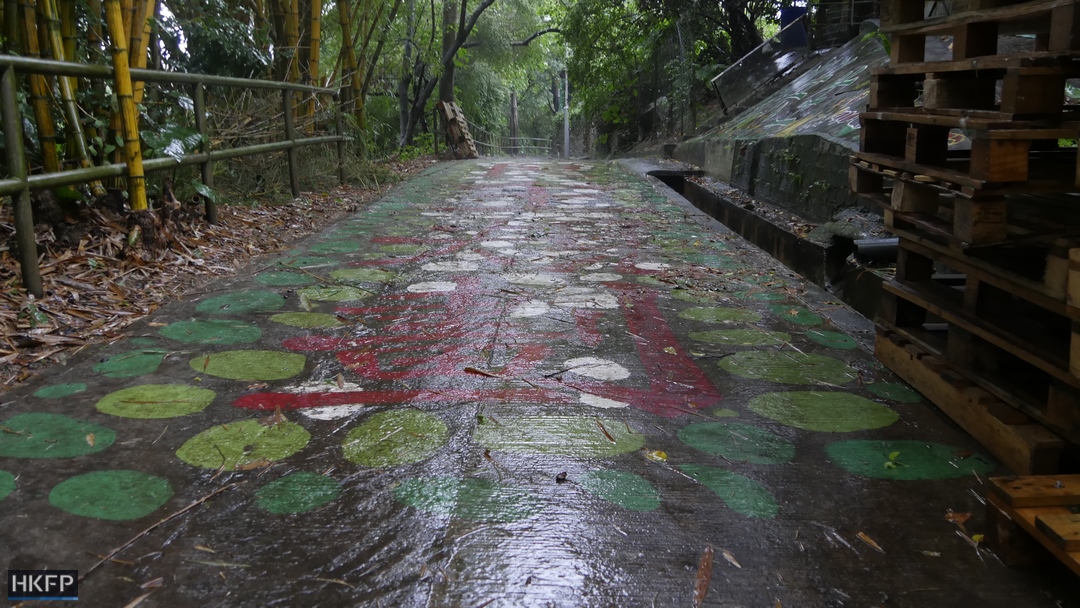 But following closed-door soft lobbying with rural leaders, the government revised its proposal in 2014 to demolish Wang Chau’s three villages for public housing, leaving the brownbelt site untouched. No records were kept of the crucial lobbying meeting.

Lawmaker Eddie Chu brought public attention to the controversy after he was elected into office last September. But his efforts to support the villagers were in vain as the legislature passed funding for the redevelopment plans in March.

With the August eviction deadline suddenly announced, villagers felt they have no choice but to lodge their protest by putting up wooden barricades and organising 24-hour patrols. But activist Lam says that these measures are symbolic, rather than a resort to force. 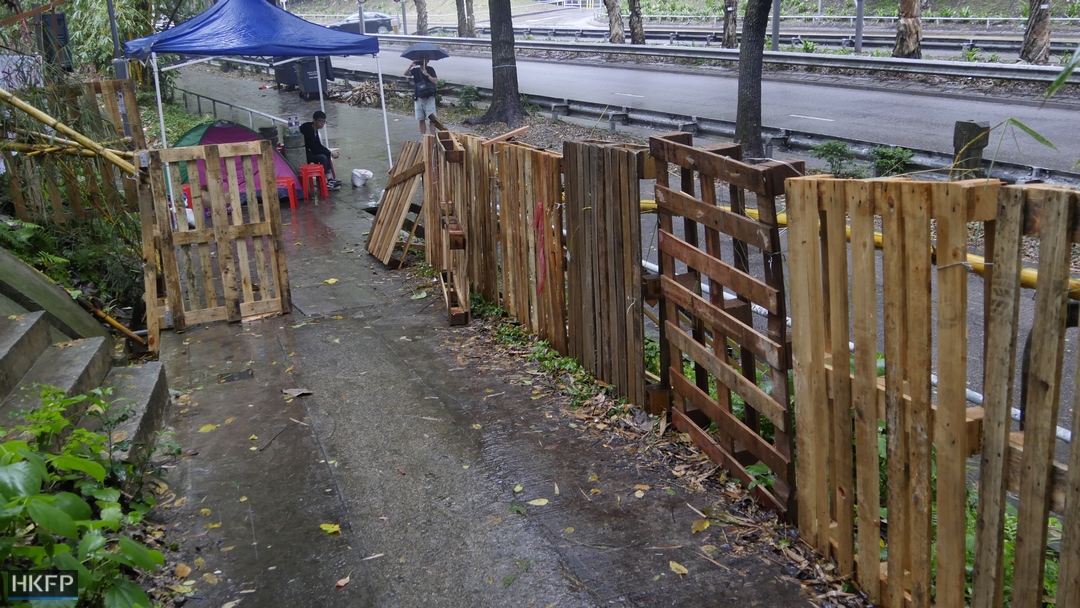 “The villagers set up the barricades to tell the government that they do not agree with its plans, in terms of justice, procedural correctness or the principles of development,” she said. “We will not buckle and accept this.”

“We hope to have some preparations so we know when the Lands Department will enter the villages,” she added. “We will be on the look-out from different locations in the village 24 hours a day.”

“Even if the government clears [these barricades], we will set them up again… We don’t want to have any confrontations, but we hope that by doing this, villagers can communicate information to each other.” 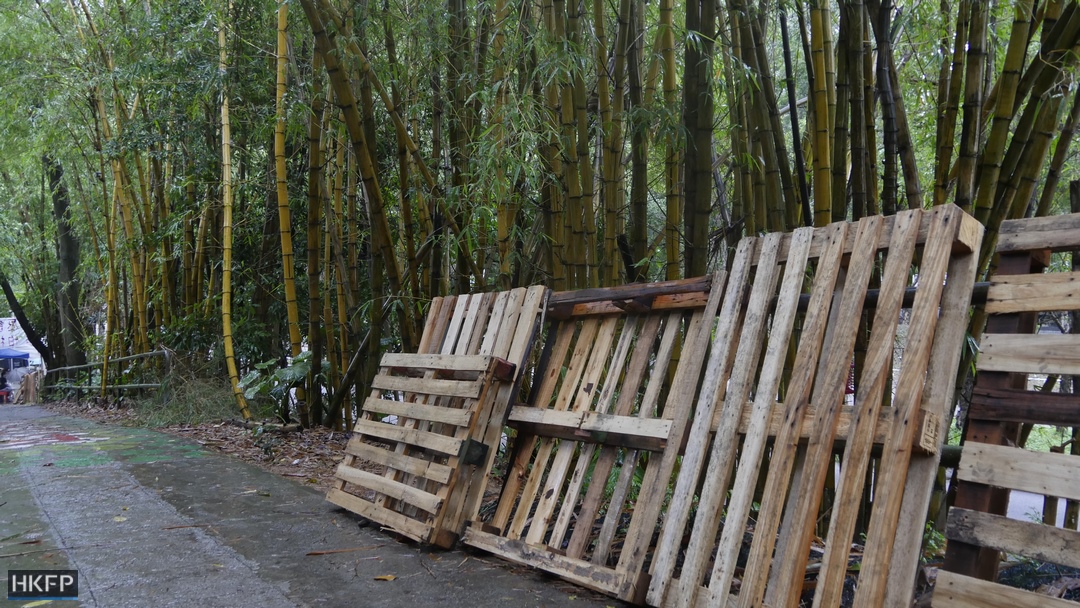 While one path leading to Wang Chau was guarded, another was not. Volunteer guard Ivan told HKFP that government officials could enter the villages if they really wanted to.

“We’re putting all these things here to show our stance that we will resist the government,” he said. 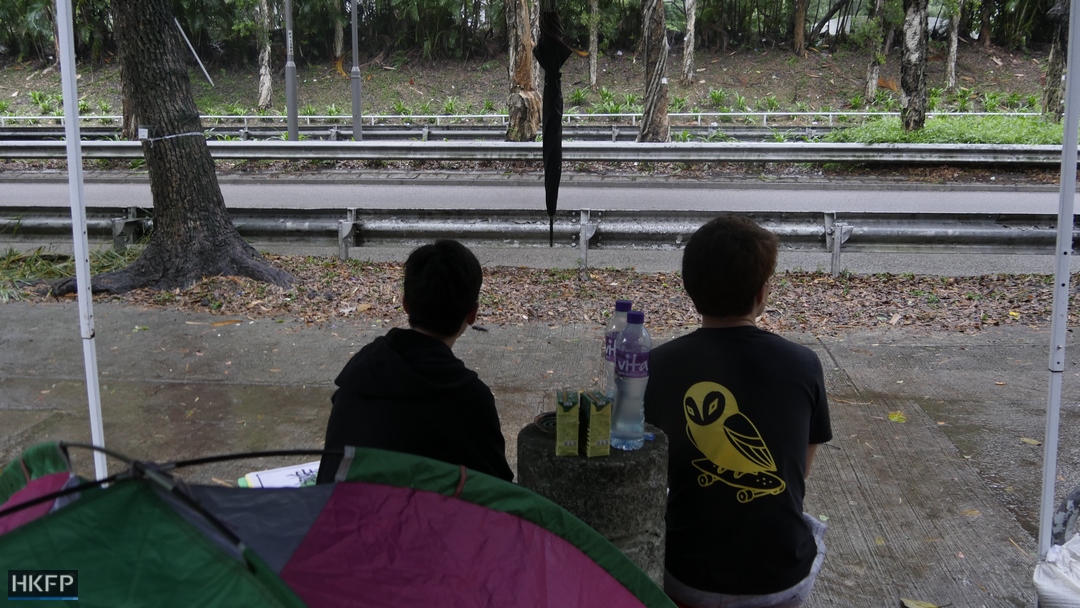 Ivan (R) and another volunteer guard at the entrance to Wang Chau. Photo: HKFP/Elson Tong.

Ivan is not a Wang Chau resident – in fact, he lives on Hong Kong Island, on the other side of the city. He came to the villages during his two days off work to show his support after hearing news of the sudden eviction notices.

Lam still hopes that the Hong Kong authorities will agree to negotiations on preserving the villages within these three months. She said that for the villagers, the issue is not monetary compensation, but their way of life.

But even having sent petition letters to Chief Secretary Matthew Cheung, she says the government has only been unilaterally briefing villagers on resettlement and compensation – not negotiating with them. 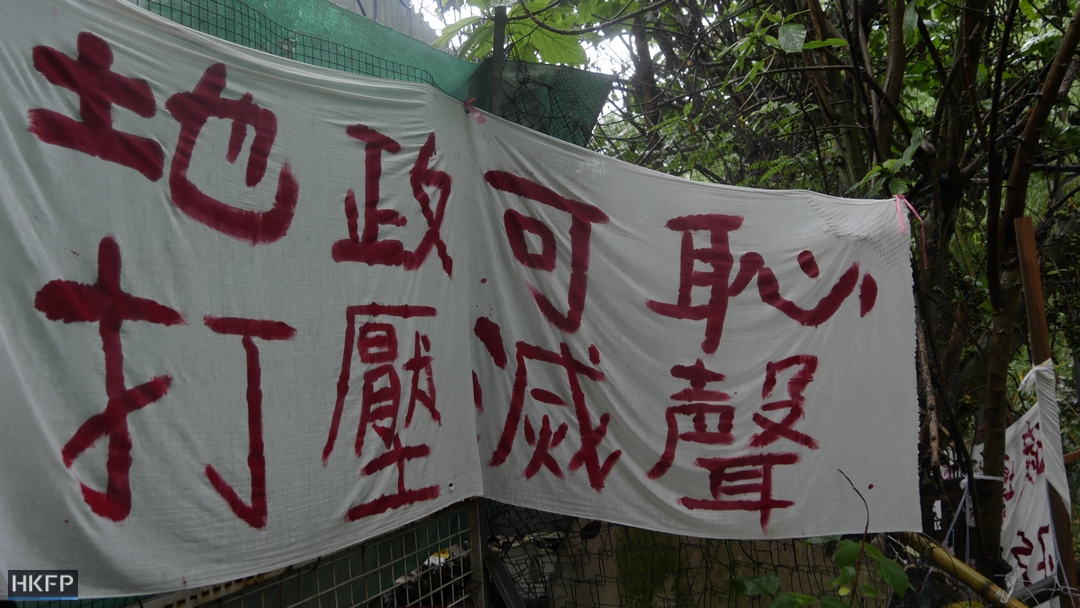 “Shame on the Lands Department for oppression and silencing.” Photo: HKFP/Elson Tong.

“We hope that the government can be a bit more pro-active, because it can solve this problem if it really wants to.”

Last December, a Yuen Long resident filed a judicial review, claiming that the government had not obtained an environmental impact assessment report before passing housing development proposals in Wang Chau.

But Lam does not know whether the legal challenge can block the government operation in time: “It’s hard to control the timeline of this.” 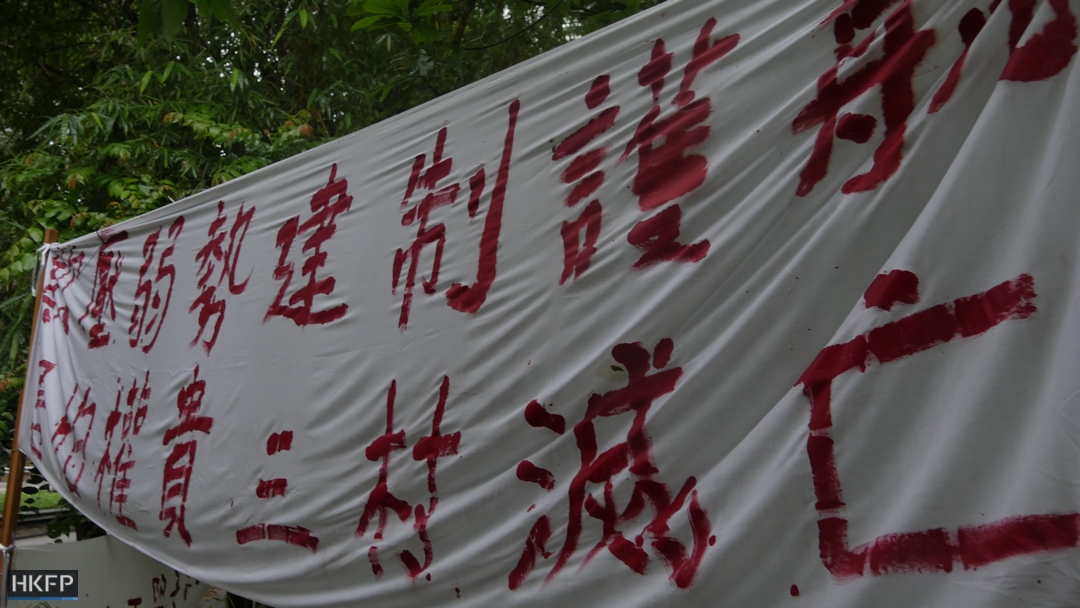 Likewise, she cannot imagine what will happen if the government proceeds with evicting Wang Chau’s 200 villagers in early August.

“None of us want to see officials enter the village to requisition the land by force,” she said.

See also: Video: Our Farm, Their Land – The fight for Mapopo Community Farm

“We know that security personnel were called to facilitate previous development plans in Hong Kong. We really don’t want that to happen.”

The defence of Wang Chau: Barricades are up, but villagers still hope for talks