The government has called upon tourists to comply with Hong Kong law, following public outrage over the influx of Chinese tourists setting up tents on beaches during China’s golden week holidays.

“People are not allowed to put up tents on our beaches,” Director of Leisure and Cultural Services Michelle Li Mei-sheung said on Tuesday. “We urge everyone during their visits to comply with the law and respect Hong Kong.” Li said her department and the police are conducting a joint operation to patrol beaches and urge tourists to refrain from camping there.

She said the problem was concentrated on beaches in Cheung Chau and a campsite in Pui O, Lantau. In response to the high demand for the Pui O campsite during China’s golden weeks in May and October, the leisure department has set up a reservation system for Hong Kong residents, with the remaining quota open to anyone at the door.

The remarks came after local media brought attention to the influx of Chinese tourists on beaches and campsites on outlying islands.

Apple Daily reported that a group of 45 tourists from Hubei, China set up 24 tents on Tung Wan Beach in Cheung Chau on Saturday. The group spent the night on the beach and moved to Pui O Campsite the following day. Suitcases were lined up on a Cheung Chau beach. Photo: Apple Daily.

The tourists were able to save on accommodation costs by camping in public spaces, the paper said. They left suitcases on the beach and used the changing rooms for personal grooming.

A video captured by the newspaper appeared to show two police officers walking by the tents without taking action. 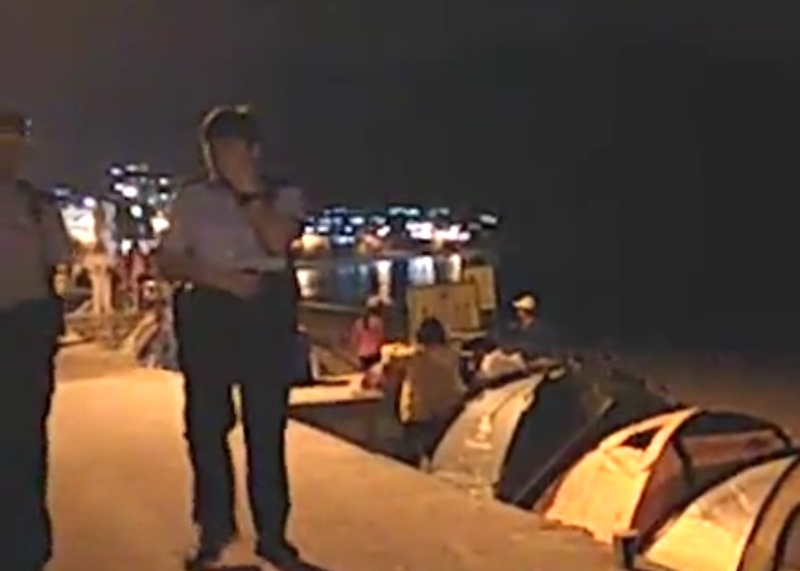 A tourist told Apple Daily that they wanted a “cheap experiential tour.” Another said she no longer wanted to spend time in the city’s urban area after being treated poorly by Hongkongers during her previous visits.

Meanwhile, Oriental Daily reported that four mainland tourists set up tents in a public park across from Tung Wan Beach on Sunday. Employees at the leisure department had to call police for assistance after failing to persuade the tourists to leave. 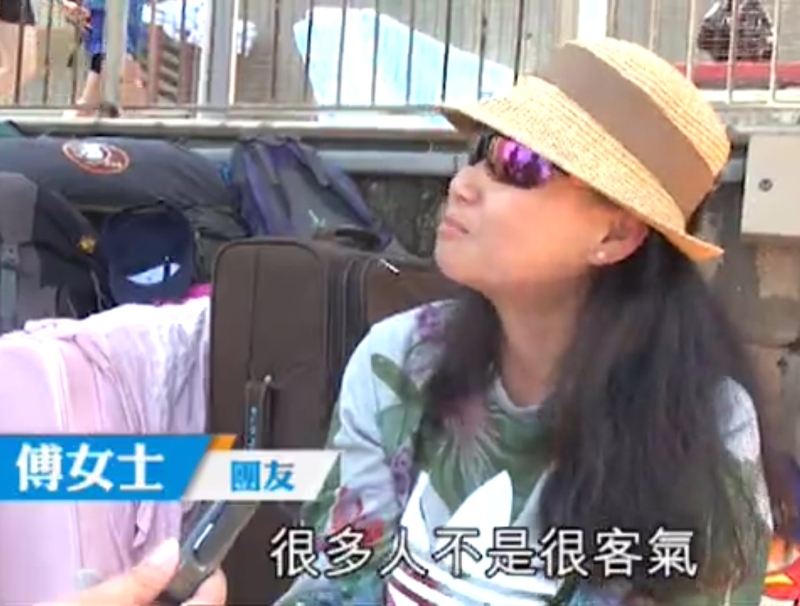 “Many people were not very nice,” said the tourist who complained of the poor attitude of Hongkongers during her previous visits. Photo: Apple Daily.

Other campsites have also seen crowds of Chinese campers, such as Ham Tin Wan Campsite in Sai Kung.

Oriental Daily said a travel agency charged HK$290 per person for the camping tour. Headline Daily reported that some mainlanders formed a camping tour on online forums, saying that they expected to spend less than RMB300 in total in Hong Kong.

There are also several websites in mainland China promoting “cheap camping tours” in Hong Kong. For example, a travel blogger recommended camping in Hong Kong because accommodation is expensive.

“The Pui O campsite is the best for beginners because of its great conditions,” the blogger wrote. “During the summer, you can even take a shower and there are security guards and cleaning staff looking after the site. This is the best campsite I have been to. I must say that Hong Kong does a very good job in running public facilities.” It is not the first time the public have been alarmed about Chinese tourists camping in public spaces. Cheung Chau South District Councillor Kwong Koon-wan told HKFP that the island saw a similar problem around two years ago, though it had died down after a while.

“Some Cheung Chau residents complained last weekend, though it didn’t pose a big concern for us. But we fear the trend will grow,” Kwong said.

“It is, after all, illegal to set up tents on beaches. There may also be personal safety issues for the campers,” he added. “I don’t want them to encourage others to do the same, thinking that no one looks after the beaches.”

It is an offence to place tents on any bathing beach under the Bathing Beaches Regulation. Offenders face a maximum penalty of a HK$2,000 fine and 14 days in prison.

On Tuesday, the Immigration Department said more than 490,000 Chinese tourists visited Hong Kong over the golden week holiday – a five-year high. Hong Kong received another 130,000 tourists from other countries of origin between Saturday and Monday.