“I don’t know why this new generation of children do so much more work than mine did… At seven or eight years old, children don’t know how to say no.”

Eric Cheung is an IT professional, and the father of 8-year-old Tracy, who goes to a Christian local school in West Kowloon. Tracy is a small-framed but active girl who enjoys studying Chinese, playing music and dancing. “In education, I would not give my daughter too much pressure,” Eric told HKFP. “I want to maintain her interest in learning.”

“I would explain stories or fairy tales to her and ask if she understands them… There are many parents like me who just want their kids to be happy, but unfortunately the current education system leaves them with no choice.”

This year, Tracy is in Primary Three, and will therefore take Hong Kong’s Basic Competency Assessment (BCA) tests in Chinese, English and mathematics in May. The BCA is a revamped version of the Territory-wide System Assessment (TSA) initially launched in 2004.

The rationale for the tests: “They help schools and teachers to enhance their plans on learning and teaching,” states the website of the Examinations and Assessment Authority. “The government is provided with objective data so as to assess the effectiveness of the education policies.”

In the United Kingdom, the equivalent of the BCA is the National Curriculum Assessment, carried out for Primary Two students in English, mathematics and science. 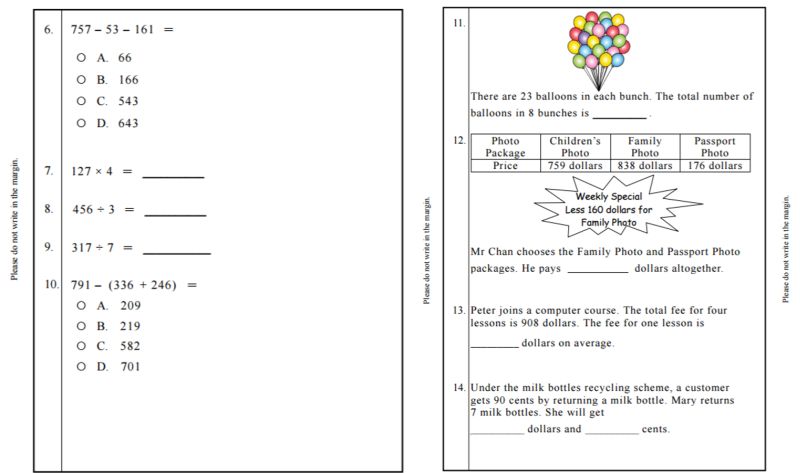 The main difference between the two jurisdictions is that Hong Kong schools are accused of excessively drilling students to prepare for the tests.

The TSA has never been used to assess individual students. But until 2014, the Education Bureau included TSA results as part of the key performance metrics of each primary school, sparking a cycle of fearful competition among schools to drill children for better performance.

Although TSA results have since been excluded from the official metrics, a study by education sector lawmaker Ip Kin-yuen last year listed instances in which the data had been used unofficially: unofficial school league tables circulated in the sector, and government officials criticised schools that obtained poor TSA results.

The tests were introduced amid a decline in Hong Kong’s birth rate and student numbers, meaning that unpopular and poorly-performing schools faced the prospect of closure. There are also fears that funding could be lowered for schools that do not perform well.

Amid strong criticism, the bureau halted the TSA in 2016, conducting a trial run of a revamped assessment – the BCA.

The BCA will be introduced for all 500 local primary schools in Hong Kong this May. “Beginning in Primary One, she received some worksheets occasionally just as a ‘challenge’,” recalls Eric. “They seemed to be IQ questions, given with the instructions to just ‘answer them if you can’. But later they began telling the kids to answer the questions within a specified time.”

“So one day after work two or three years ago, I went to participate in an open forum [on the TSA tests] in Kowloon Tong,” he continues.

“What happened was that… only members of parents and teachers associations [within schools] could enter the venue. Others who tried to walk in were blocked.”

“It became very rowdy that night. The staff at the venue were deliberately giving us trouble, but we just wanted, as moms and dads, to sit down to allow [the Education Bureau] to explain.”

Despite being blocked from participating, Eric met members of the TSA Concern Group, and went on to investigate the contents of the tests himself. “Some questions were very tricky,” he says.

“For example, [the arrow of] a compass would usually point upwards to indicate north, but the question would turn the compass around so north is rightwards or downwards, just to mislead the kid.”

“Some kids are smart and would be able to make the connection, but if they can’t, it doesn’t mean they don’t know [how to read a compass].” 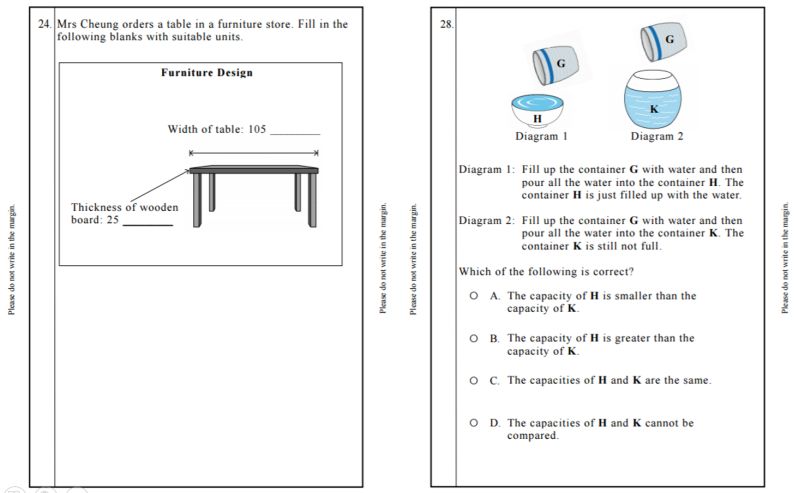 Now that Tracy is in Primary Three, Eric says her homework assignments have increased, and that BCA drills and worksheets would be mixed in with regular homework.

“She comes home at around 4pm, and starts working at around 5pm… until 9pm or 10pm. In the weekend when she has more to do, she could work until 11pm.”

Eric claims that Tracy barely has time to play or socialise with her parents. “There are guidelines telling us to spend at least one hour a day with children,” he says. “But after she does everything she’s required to do, it’s already 10pm or 11pm – do I still play with her?”

“No, of course she sleeps… As adults, in order to get her to wake up the next day, we have no choice but to force her and shout at her until she sleeps. This is a very twisted way of doing things.”

However, Eric says that the drilling culture at Tracy’s school is “not serious” compared with those of other parents whom he met in the TSA Concern Group. “They left me in shock,” he adds.

“If some schools begin lessons at 8am, kids would be forced to go to school at 7am to have class,” he says. “On the other hand, when school finishes at 3pm, kids would stay behind until 5pm, 6pm deliberately to do more TSA drills.” Tracy’s school has not required her to stay behind for extra hours in the lead-up to May’s BCA, and has not increased the number of drills. “But these drills should not have existed in the first place,” says Eric.

The TSA is not meant to be a prepared examination, and the Examinations and Assessment Authority website explicitly warns against “excessive and mechanical drilling.”

Secretary for Education Eddie Ng said in March that there was no motivation for schools to compete with one another and drill students. Two years ago his bureau even encouraged parents to submit complaints on schools that were drilling.

“But as parents we can see the homework,” says Eric. “We have it all printed as evidence. We try and speak with the Education Bureau… but they tell us ‘there’s no such thing [as drilling], you’re all delusional’.”

Eric also says that some schools use a loophole to hide their excessive drills – by drilling children during regular class time, and giving regular schoolwork as homework.

Asked whether the drills would have long-term psychological effects on Tracy’s growth, Eric says his daughter has changed. 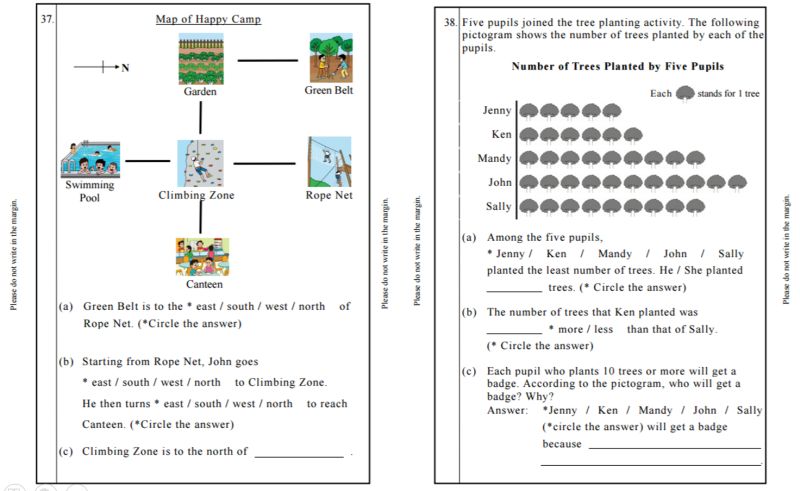 “When she was younger, she talked more and she was happier,” he recalls. “But because she works until 10pm or 11pm, even if she wants to talk to mom and dad, what does she now have to talk about? Mom’s already screaming at her to go to bed.”

“Sometimes when I see her stare at the books and the homework, with a blank expression and not saying anything – this is what I’m most worried about,” he says.

“My daughter is dazed – this is what I feel disgusted about.”

“I would rather she express it externally, complaining ‘there’s already regular homework and I still have to do these questions,’ I’d rather she throw a fit… But when I talk to her, she doesn’t admit she’s unhappy. This is a psychological barrier.”

Eric adds that the toll on Tracy is not only mental, but also physical, as she has to carry an extremely heavy schoolbag that he estimates to be 20 pounds. “I’m talking about kids who are seven or eight years old… they’ll get crooked backs.”

“I will do what I can to protect her,” he says. “At a certain point, I will just tell her not to do what she can’t do, or just do the work carelessly… she doesn’t have to answer the questions correctly.”

“I will still try and find time to play with her and talk to her… even if it’s 11pm we could still play a board game.” He ultimately believes the problem lies with Hong Kong’s pressure-focused educational environment, saying that the TSA and BCA drills have been added onto regular school work. “I feel sorry for her,” he says.

In response to the Education Bureau’s roll-out of the BCA across Hong Kong, more than 100 civil groups have promised to boycott the tests, holding street booths to gather support. The TSA Concern Group has been publicising the names and deeds of schools accused of conducting excessive drills.

The boycott has received support across the city’s political spectrum, except from the pro-business Liberal Party and the pro-Beijing Democratic Alliance for the Betterment and Progress of Hong Kong.

Personally, Eric has won a small victory. Upon his request, the principal of Tracy’s school allowed his daughter to be excluded from the tests, promising to arrange an alternative activity for her – such as going to the library.

“Since the Education Bureau said this is just a ‘study’, they let parents choose [whether] to participate or not,” he says.

Privately, other parents in Tracy’s school have also spoken to Eric of their dismay about the tests, complimenting him for his actions. “But they don’t have the courage to hand in this letter [indicating refusal to take the BCA] to the school… because they’re scared of the future consequences; they’re scared of being labelled.” Banner: “Impact of TSA-related stress on our bodies”. Photo: Lau Siu-lai, via Facebook.

In response to questions from reporters, Secretary for Education Eddie Ng said at the end of March that the BCA was “highly efficient, [posed] zero risk, and [required] no drilling.” He added that missing the opportunity to participate in the BCA would have a negative impact on the education of students.

“Professional education should not go backwards because of political changes,” he said.

Eric has no strong opinions on whether Tracy should remain in Hong Kong’s education system or go overseas – only that she should make an independent decision in the future.

“If she says ‘Dad, I want to try going overseas,’ then I will do all I can to help her,” he says. “But I wouldn’t tell her ‘you can leave next month if you can’t cope with studying here’.”

“‘Ah Ming, the kid next door, got to go overseas, so I want to too!’ – that’s not a reason. But if she feels that the overseas environment and education system would make her happier and learn more, that’s not a problem.”

“It’s not like you go overseas and suddenly become god.”

The name of Cheung’s daughter in this article has been changed to preserve her anonymity.