Political drama and extreme inequality in Hong Kong – compared with opacity and increased difficulties of reporting in the mainland – were cited as reasons why the city has been reported as its own narrative in recent years, rather than as a “window” into China. 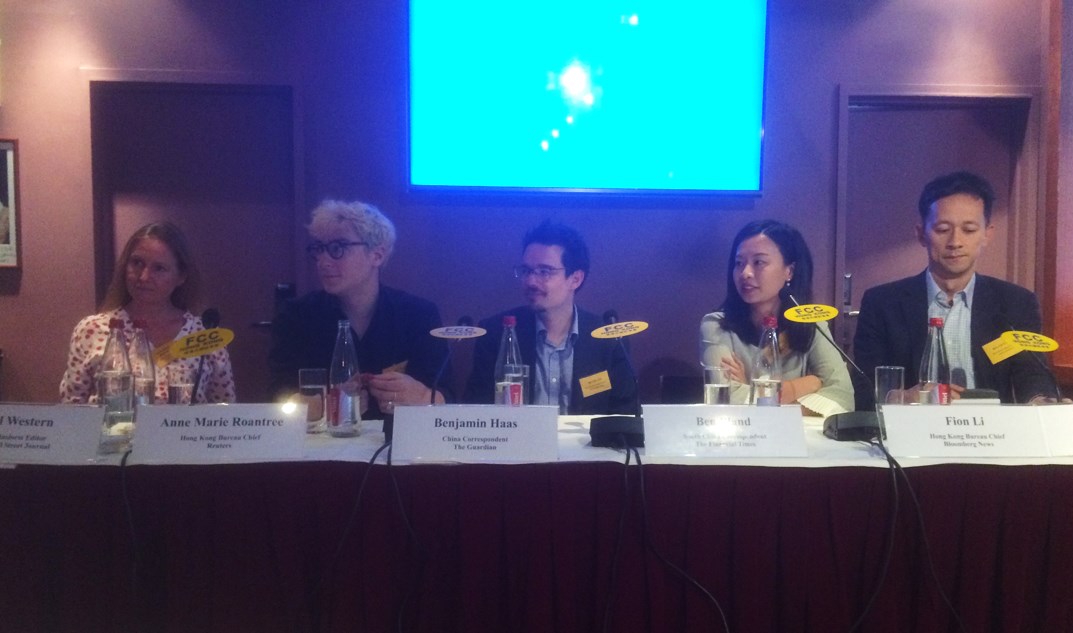 Speaking at the Foreign Correspondents’ Club’s Journalism Conference on Saturday, the Guardian’s Benjamin Haas added that portrayals of Hong Kong in the international media are noticed and well-read among the city’s locals.

Correspondents said that Hong Kong’s pro-democracy Occupy protests in 2014 initially attracted international interest because of their wider implications for China. Reuters’ Anne Marie Roantree said the 79-day demonstration was perceived as a challenge, not for Chief Executive Leung Chun-ying, but for the Chinese Communist Party.

“[Hong Kong was] a test case for how China deals with external issues,” said the Financial Times’ Ben Bland.

“But we found the Hong Kong story really spiralled out of control over the last two years,” he added, citing the emergence of localism and the disappearance of residents connected to the Causeway Bay Bookstore. “These stories are interesting in and of themselves.” Haas said Hongkongers’ high level of English literacy meant that international coverage could also generate local readership. He added that pro-democracy lawmaker Claudia Mo’s opinion piece in the Guardian, denouncing Beijing’s November interpretation of the Basic Law, was read by some half a million people.

On the other hand, the opacity of facts and unresponsive officials were cited by Bland as reasons why mainland Chinese stories caused “fatigue” among readers, unlike the dramatic developments in Hong Kong.

Speaking to HKFP, Haas recalled that he wrote some 14 local political stories for the Guardian in a month following his arrival from Beijing last October. But he said that readers prefer stories about broader trends rather than single events.

The London-based newspaper reported on Thursday’s arrest of nine activists for their role in last November’s Basic Law interpretation protest, but Haas said it may not have done so if disqualified localist lawmakers Yau Wai-ching and Baggio Leung had not been arrested the previous day.

“If it was just one person getting arrested… we probably wouldn’t have written that,” he told HKFP. “At the end of the month, we would write one story talking about all of these things.” November 2016 protest against the interpretation of the Basic Law. Photo: HKFP/Kris Cheng.

Haas described the lack of interest among western audiences for international news as the fundamental obstacle to further reporting in Hong Kong.

“I watch TVB at night, and you see stories about America, and you see there’s a lot of international news,” he said. “But if you watch the nightly news in New York, you barely hear anything about the outside world.”