Every day, hospital porter Kashmir Singh helps at the free kitchen at the Sikh temple Khalsa Diwan in Wan Chai. He visits in the morning before work, and comes again during lunch hours.

The 65-year-old has been doing this almost nonstop for more than 40 years. To Singh, the community kitchen – also known as langar – is a vital part of his Sikh faith and a symbol of equality and brotherhood. 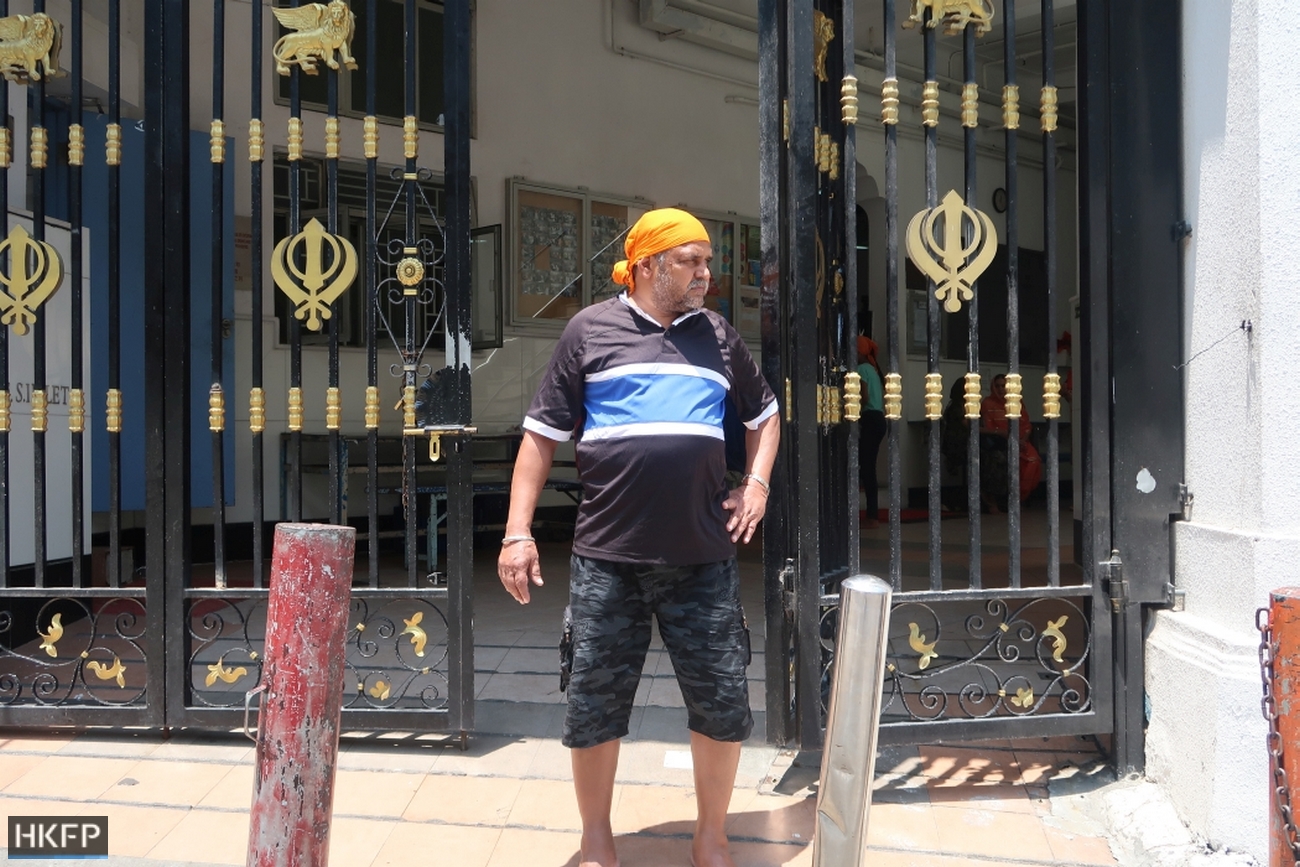 “I like helping out at the free kitchen, because it is part of our service to God,” Singh, who came to the city from Punjab when he was a teenager, said in proficient Cantonese.

Anyone can get a free meal at the daily community kitchen. Volunteers begin cooking rice, lentils and other vegetarian dishes as early as 4am. Roti is made from scratch, cooked on a stove and served fresh to guests. 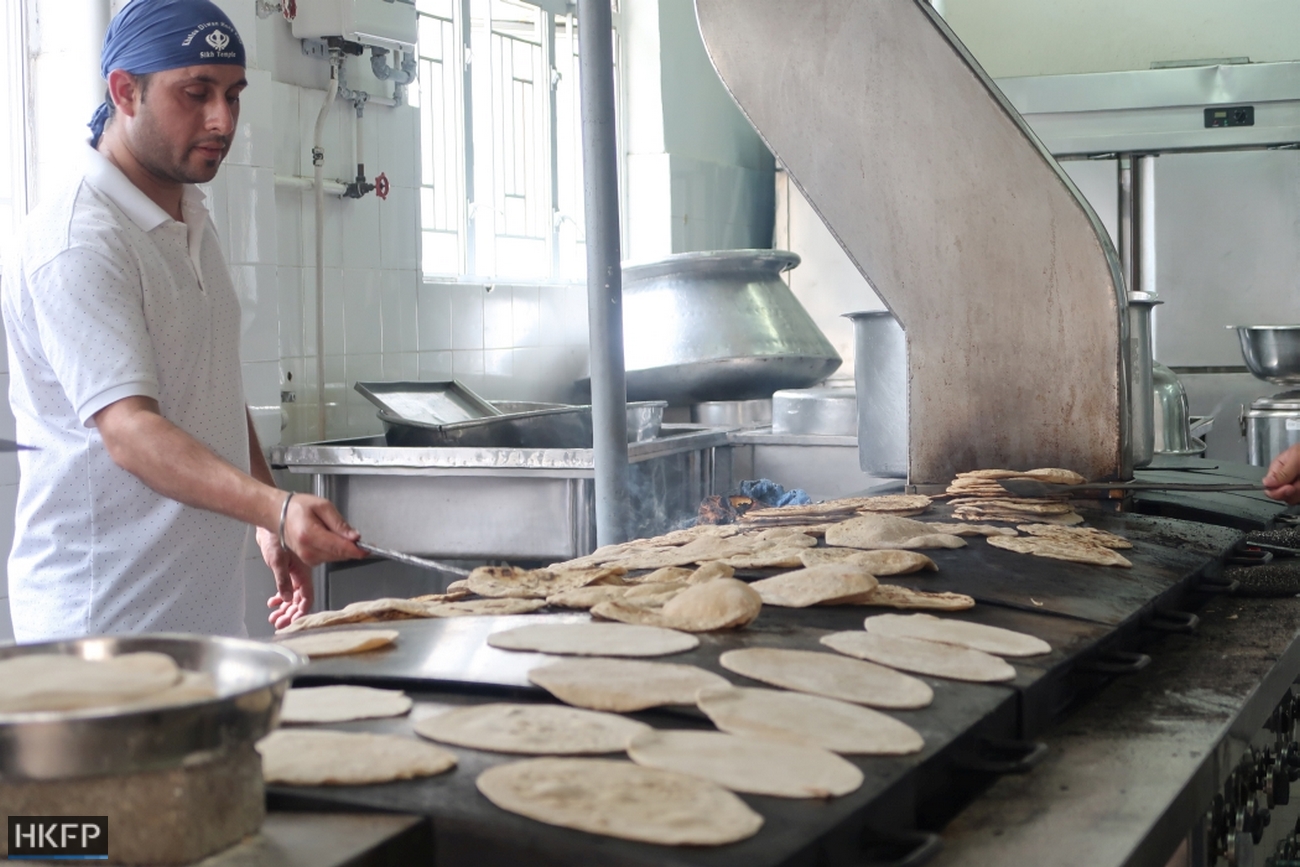 The langar was established in response to the Hindu caste system that prohibited people of different castes from eating together. In the Sikh free kitchen, everyone eats the same food sitting together.

“We welcome everyone, because we believe in equality,” the Khalsa Diwan’s religious teacher and manager Gurmel Singh told HKFP. “Everyone can come to the prayer hall. For langar, everyone is welcome to come and eat the food. Nobody will ask who you are.” 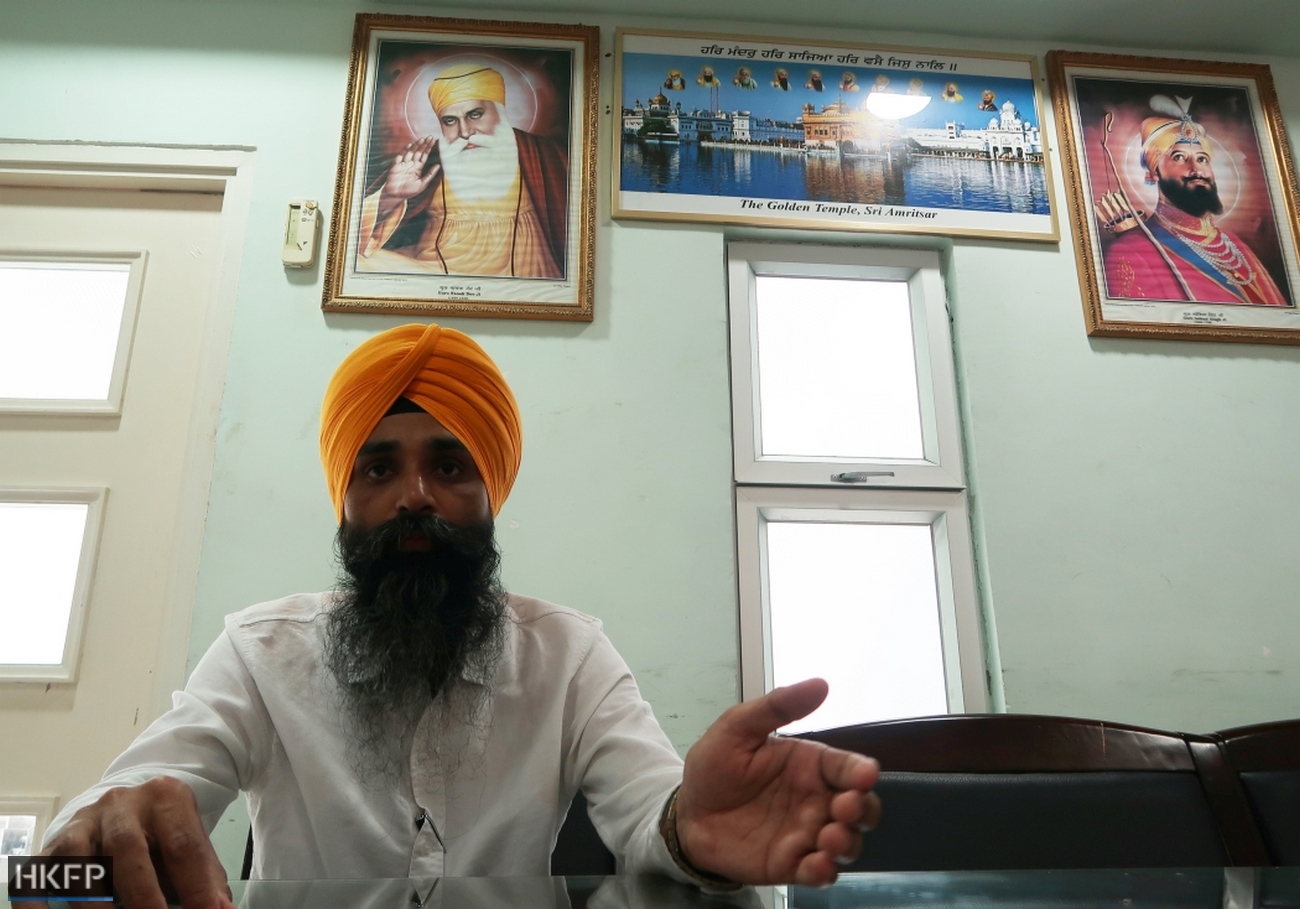 He said the temple receives a lot of school visits, having served around 25,000 students since he came to work at the temple eight years ago. The tours introduce the Sikh religion and way of life to visitors. “[The tours] are very important because Hong Kong people don’t know much about the Sikh religion,” he said.

Understanding brings respect, Singh added. “Then they would know Sikhism is a religion of peace, love [and] tolerance.” 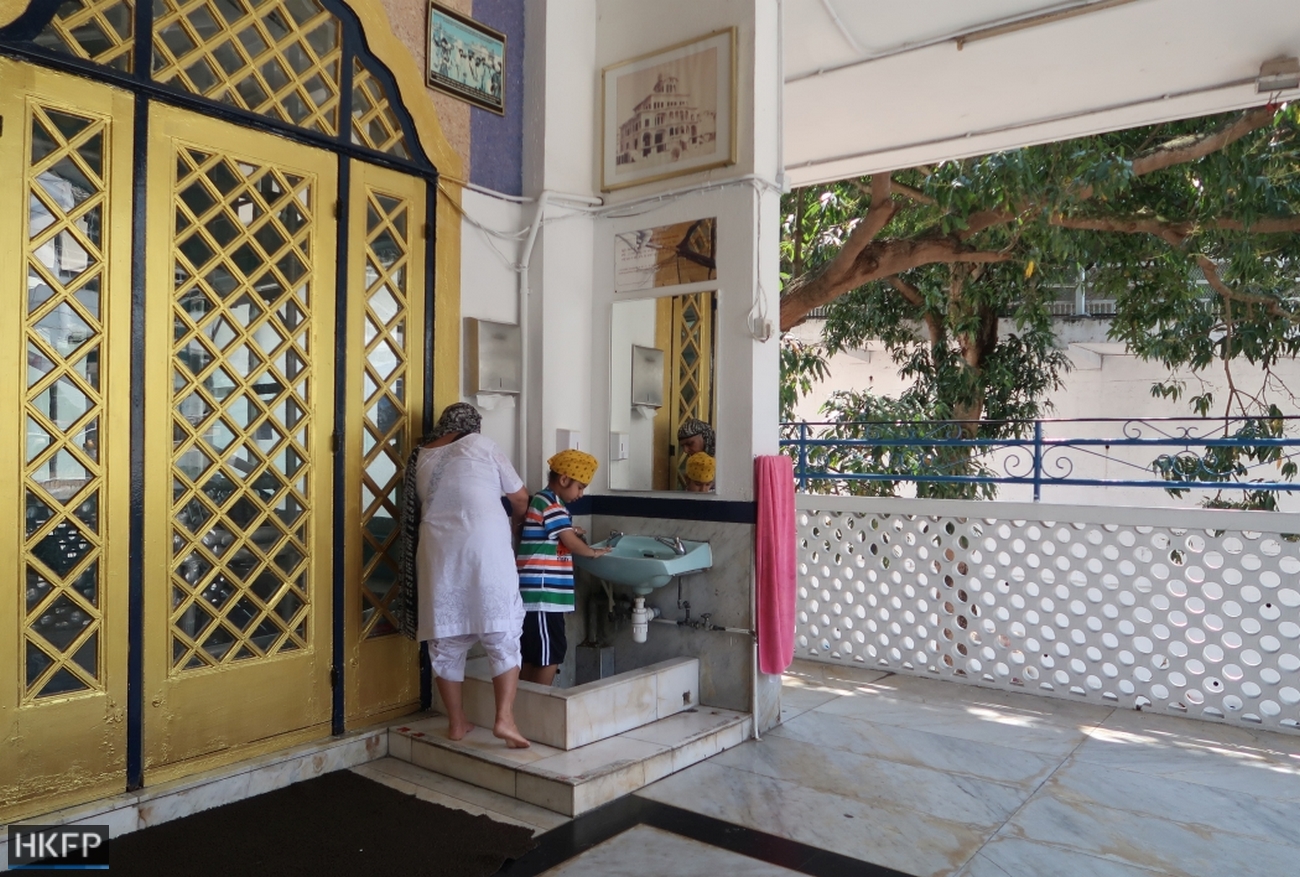 A mother and child wash their hands and feet before entering the prayer hall. Photo: HKFP/Ellie Ng.

A relatively young religion, Sikh was founded in the Punjab region by Guru Nanka Dev Ji in the 15th century. It advocates peace and service to humanity.

The largest free kitchen is located at the Golden Temple in Punjab where some 100,000 people are fed every day. The Khalsa Diwan in Hong Kong serves around 200 people on a weekday and 1,500 on Sundays. It also regularly donates grocery items to food assistance programme Food Angel. 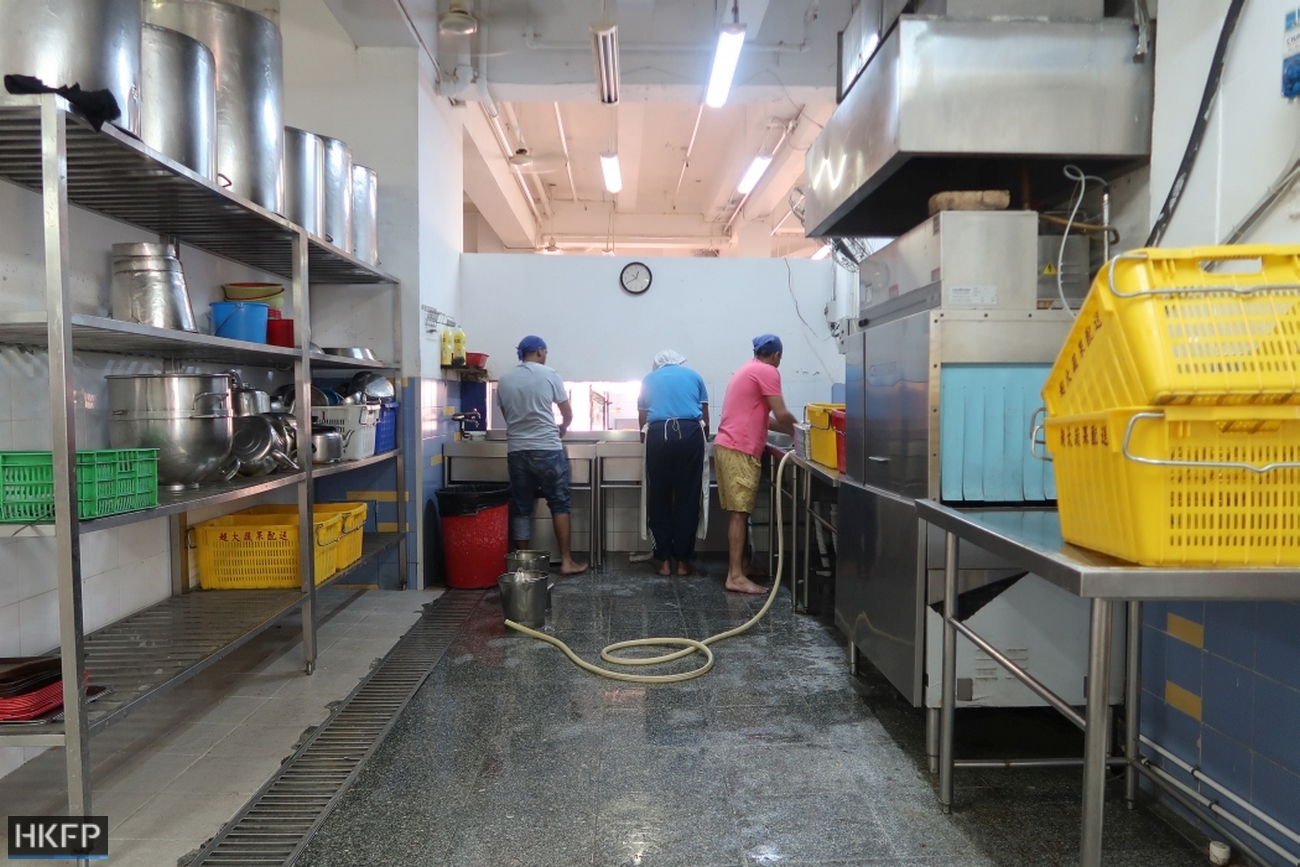 The Khalsa Diwan was built in 1901 by Sikhs from the British army. During the WWII, it saved lives by providing shelter for locals. Its well – now dried up – was an important source of drinking water for those seeking refuge inside the property. 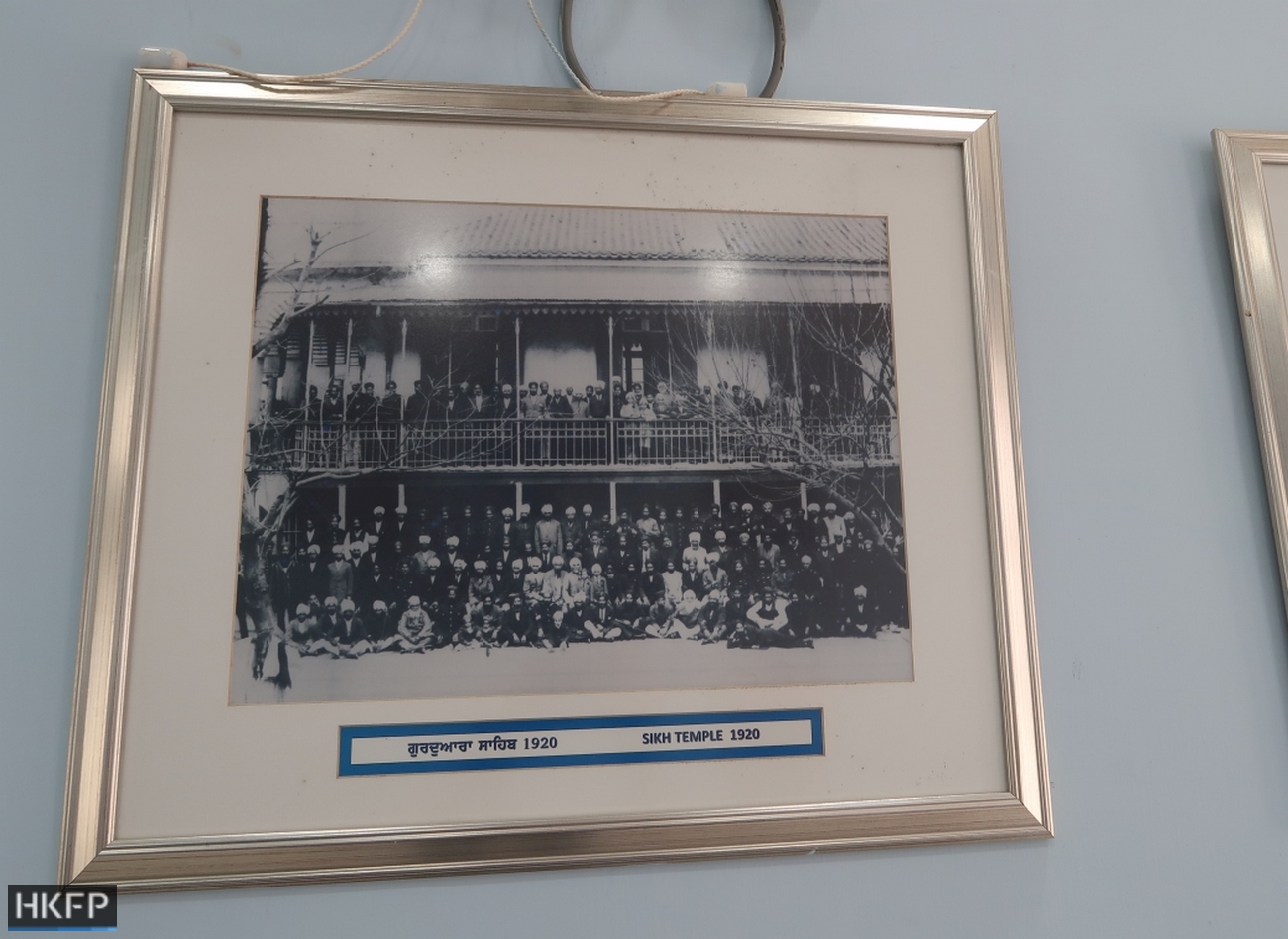 The temple survived the war, though parts of it were destroyed. One of the priests was killed when the Japanese army threw a bomb onto the front side of the temple, said the Khalsa Diwan’s president Sukha Singh Gill. 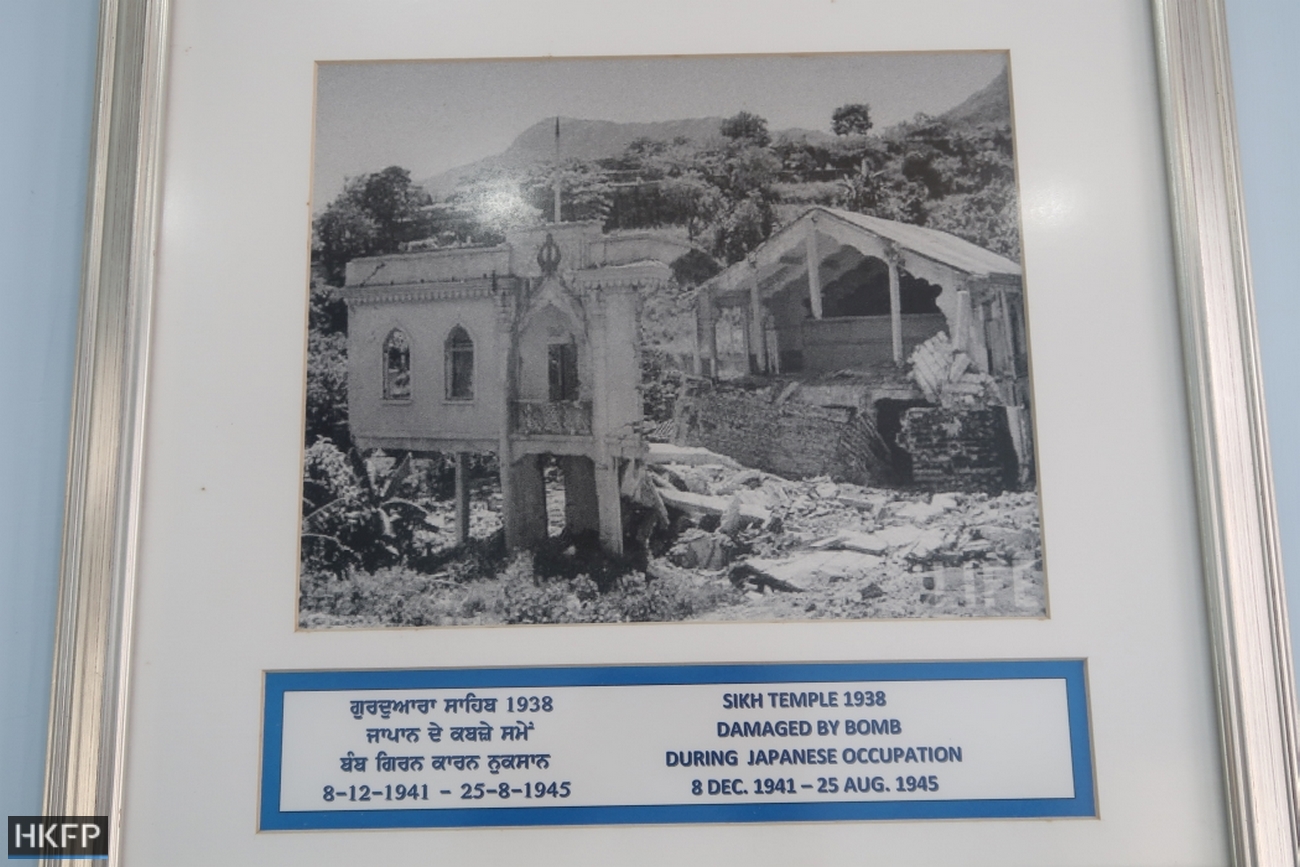 A part of the temple was destroyed during the Japanese Occupation in WWII. Photo: HKFP/Ellie Ng.

Today, traces of war are no longer visible on the property. Two trees stand guarding the spacious yard and provide shade for people chatting underneath over a cup of milk tea.

Visitors are required to cover their hair, which is regarded by Sikhs as a symbol of saintliness and harmony with god. 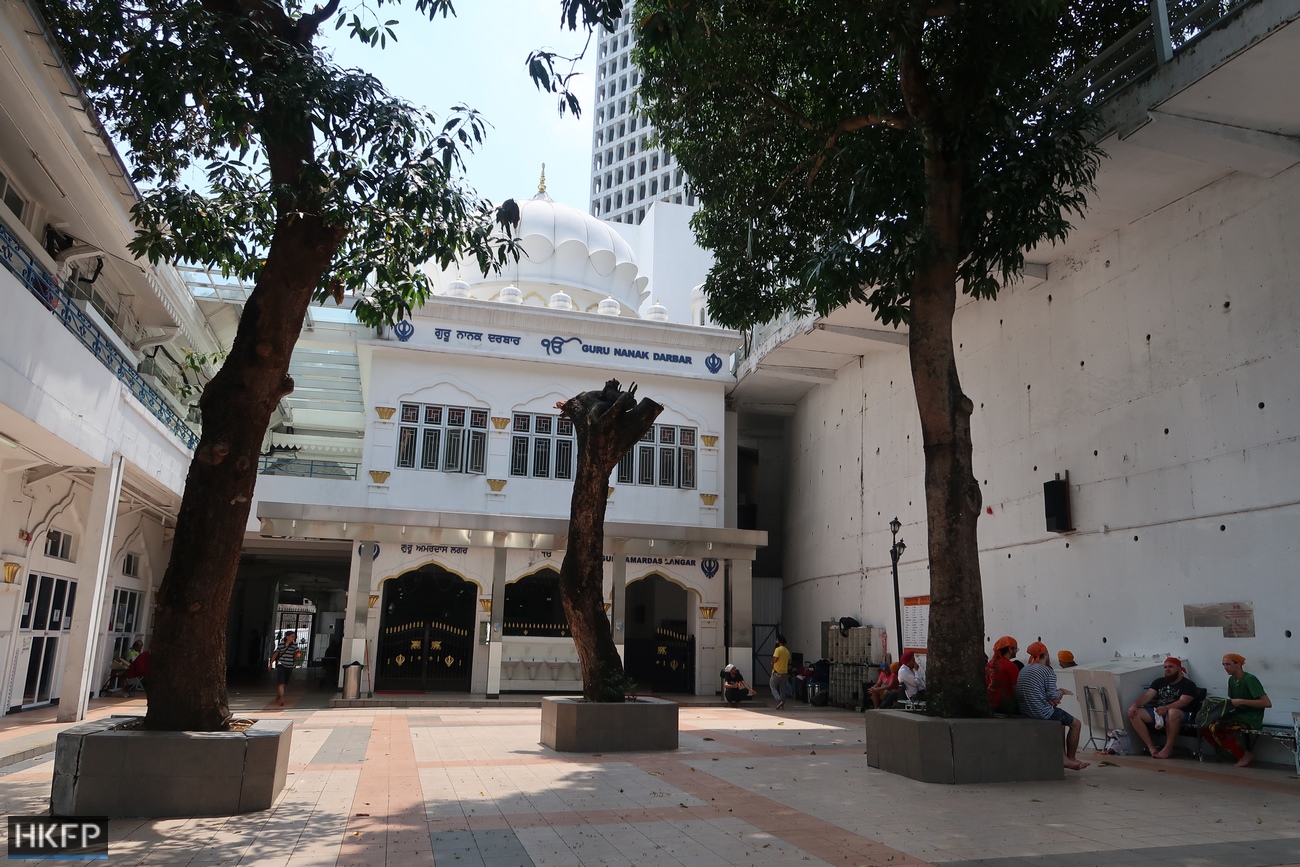 The yard of the temple. Photo: HKFP/Ellie Ng.

To some, the free kitchen helps them get through the day without going hungry.

James Kong, 43, said he relies on temporary jobs and comes to the free kitchen whenever he does not have work.

He usually eats by himself. Sometimes he exchanges a few words with other visitors, though he finds the language barrier to be an issue as not all Sikhs speak English or Cantonese, he said. 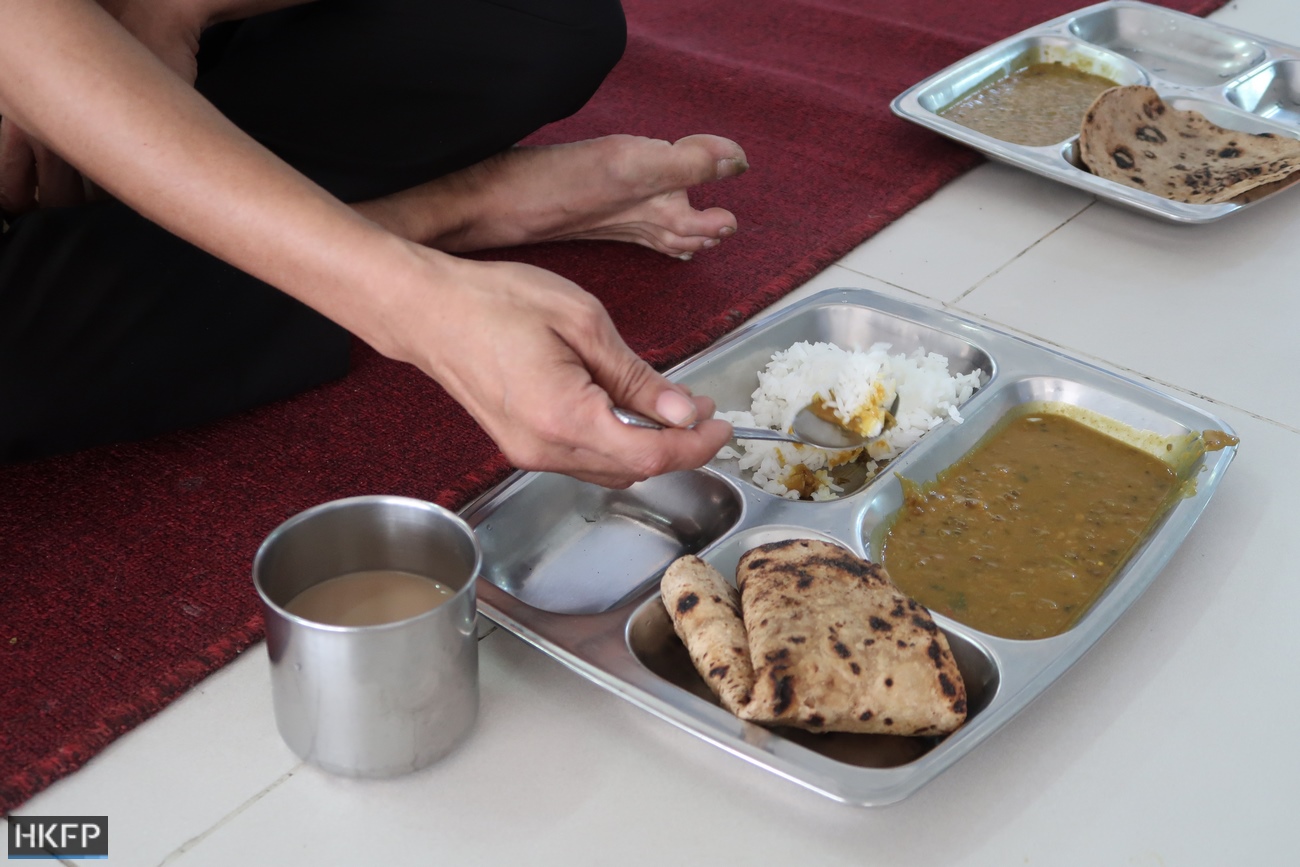 The free kitchen also helps refugee claimant Sukhi meet his needs, as he lives on a meagre government payment of HK$1,200 allocated for food every month.

But the Khalsa Diwan is more than just a meal provider for the 28-year-old. It is a place where he feels at home in Khalistan – a separate country that Sikh nationalists seek to establish in the Punjab region and that Sukhi identifies with.

Having only arrived in the city last November, Sukhi said he likes Hong Kong, though he feels homesick whenever he walks on the street. 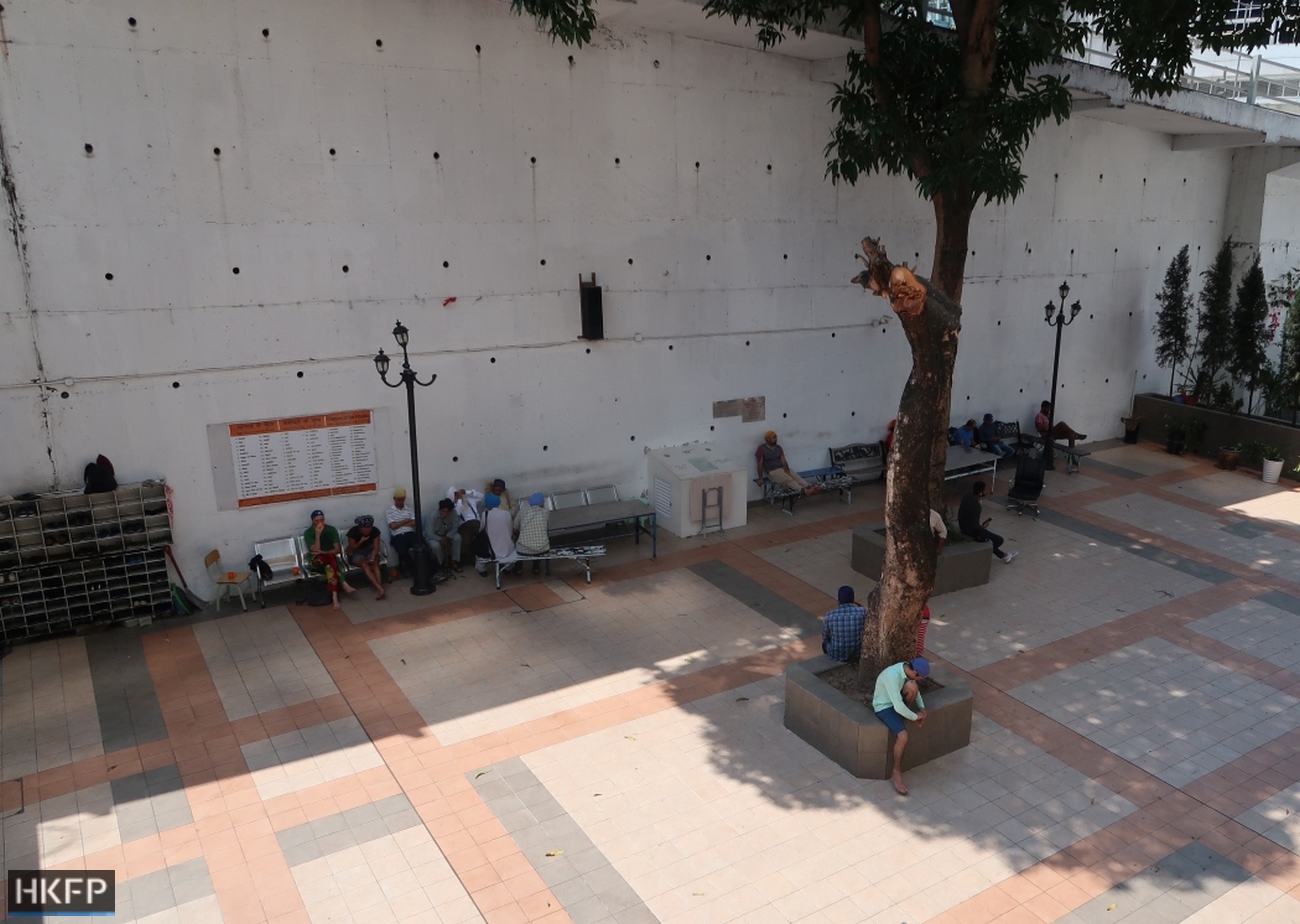 The yard of the temple. Photo: HKFP/Ellie Ng.

“I feel sad when I am outside [the temple] because I think about my family, my mom and dad,” he said. “But inside, I eat and I am happy. I feel like home. I make many friends.”

Still adjusting to life in the city, Sukhi has had a few encounters with police because of his religious practice. He carries a sword – called kirpan – everywhere he goes. Kirpan symbolises courage and is meant to be used as a weapon of defence only.

But a sword is a rather uncommon sight in the city. Sukhi said he had been taken to police stations a few times on suspicion of possessing weapons after officers stopped him on the street. He said he explained to them the meaning of the sword and was allowed to keep it. 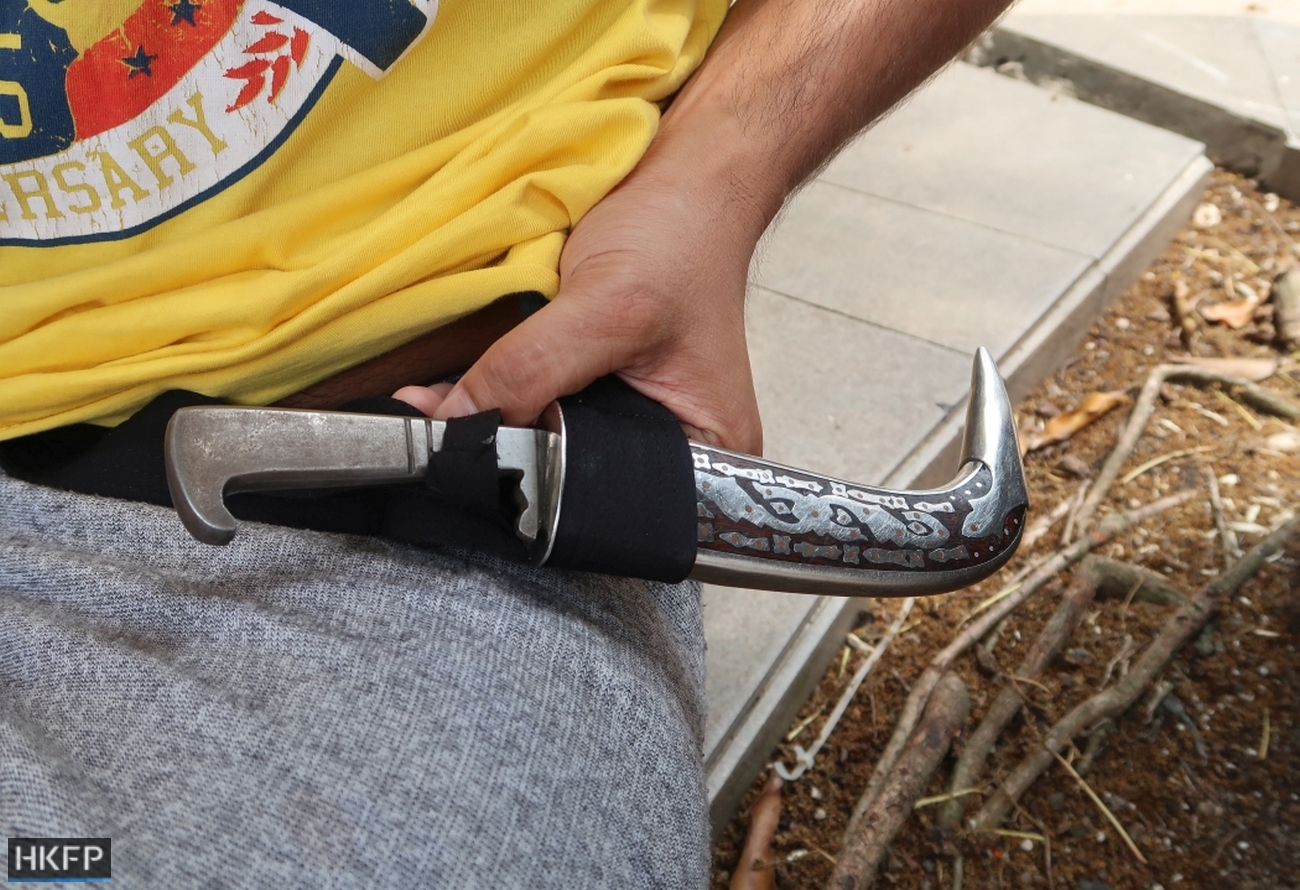 He stays in a tiny flat in Sai Ying Pun, four subway stations away from the temple. He socialises with friends at the temple during the day and watches TV at home at night. He also picked up Cantonese skills from people he plays football with at the Southorn Playground in Wan Chai.

Roomi will soon end his long years of waiting in the city, as he is set to join his sister in Canada in September. “I am very excited,” he said, adding that he is a bit worried about the cold weather there. 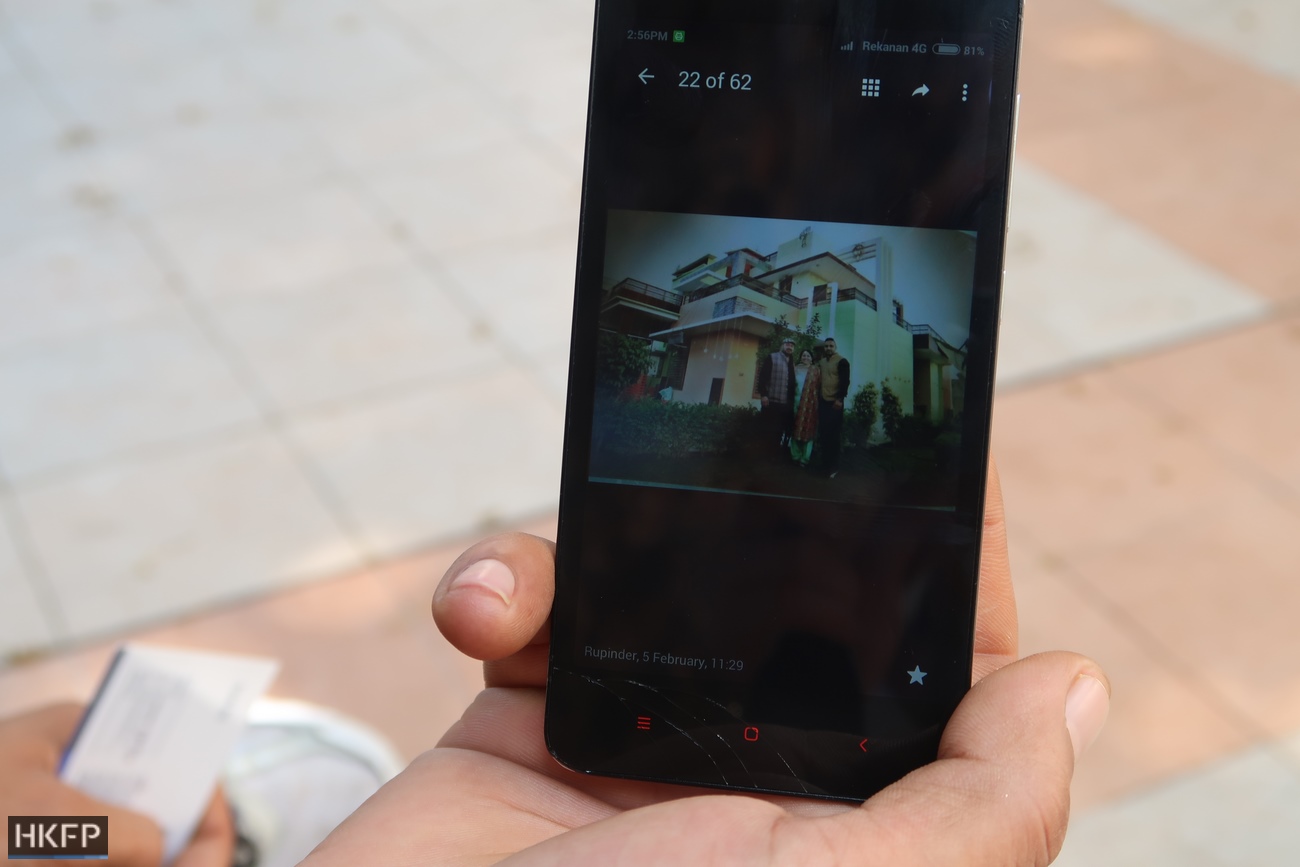 Roomi keeps photos of his family – whom he has not seen in person since he left Punjab – on his phone. Photo: HKFP/Ellie Ng.

The Khalsa Diwan also draws many backpackers from around the world. One of them is former baker Samuel Bessette from Quebec, Canada. The 21-year-old said he had been travelling in Asia for over a year and had spent two months in Hong Kong.

He heard about the Sikh temple from a friend soon after he arrived in the city. He volunteers in the kitchen as a form of paying back for the free meal he receives.

Bessette was also impressed by the generosity of Sikhs he met at the temple. He said he was wearing a pair of worn-out trousers when he arrived in the city, and a Sikh in the temple gave Bessette his own pair. 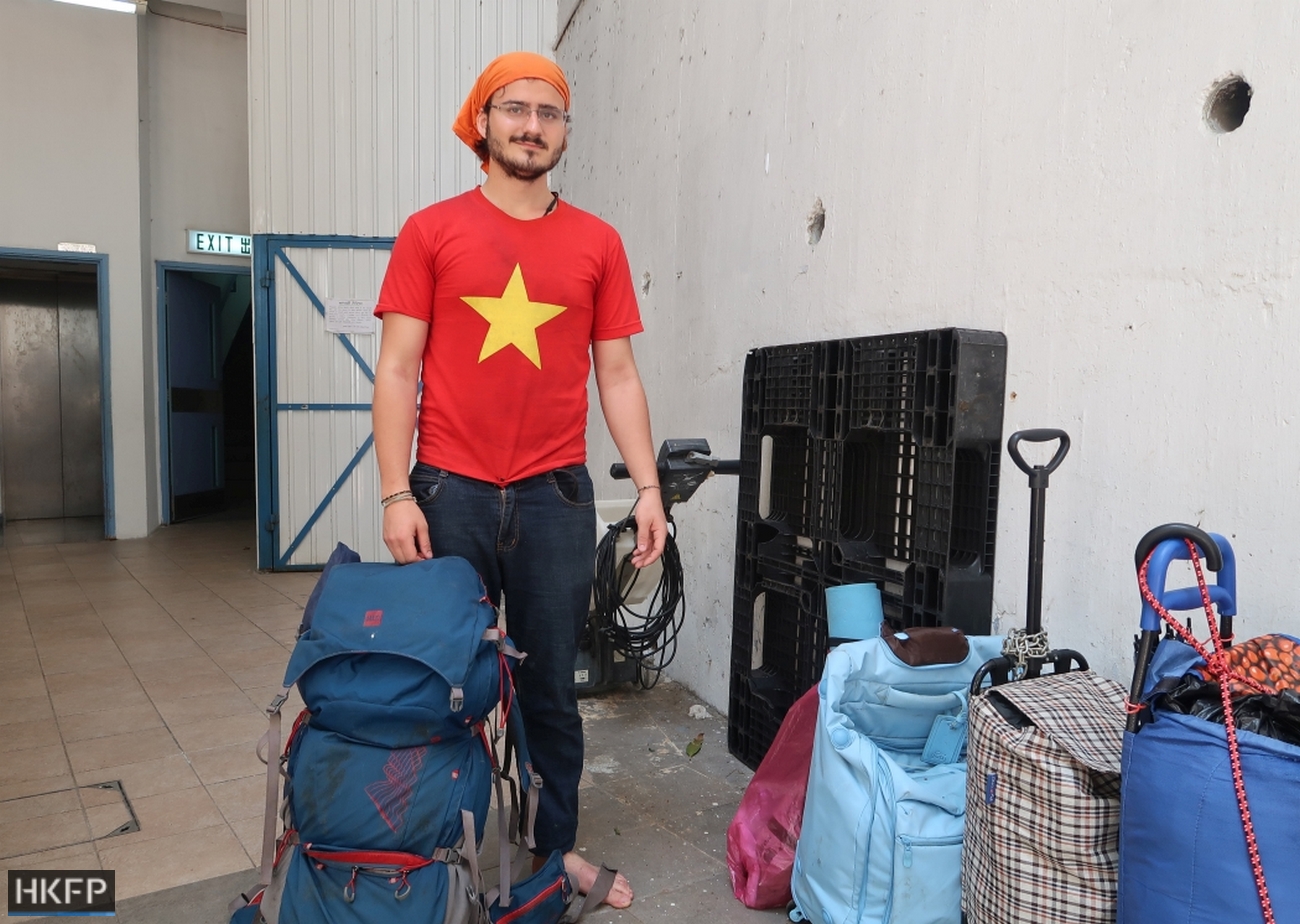 “He said you should take it, because you need it more than I do,” Bessette recalled. “They would do everything they can to help others. It is like family.”

“You don’t get this proximity in this busy Hong Kong. Everything goes fast outside. It’s about efficiency and individualism,” he said. “But [the temple] is about community – taking your time, going slowly, enjoying your cup of tea and passing your time here.” 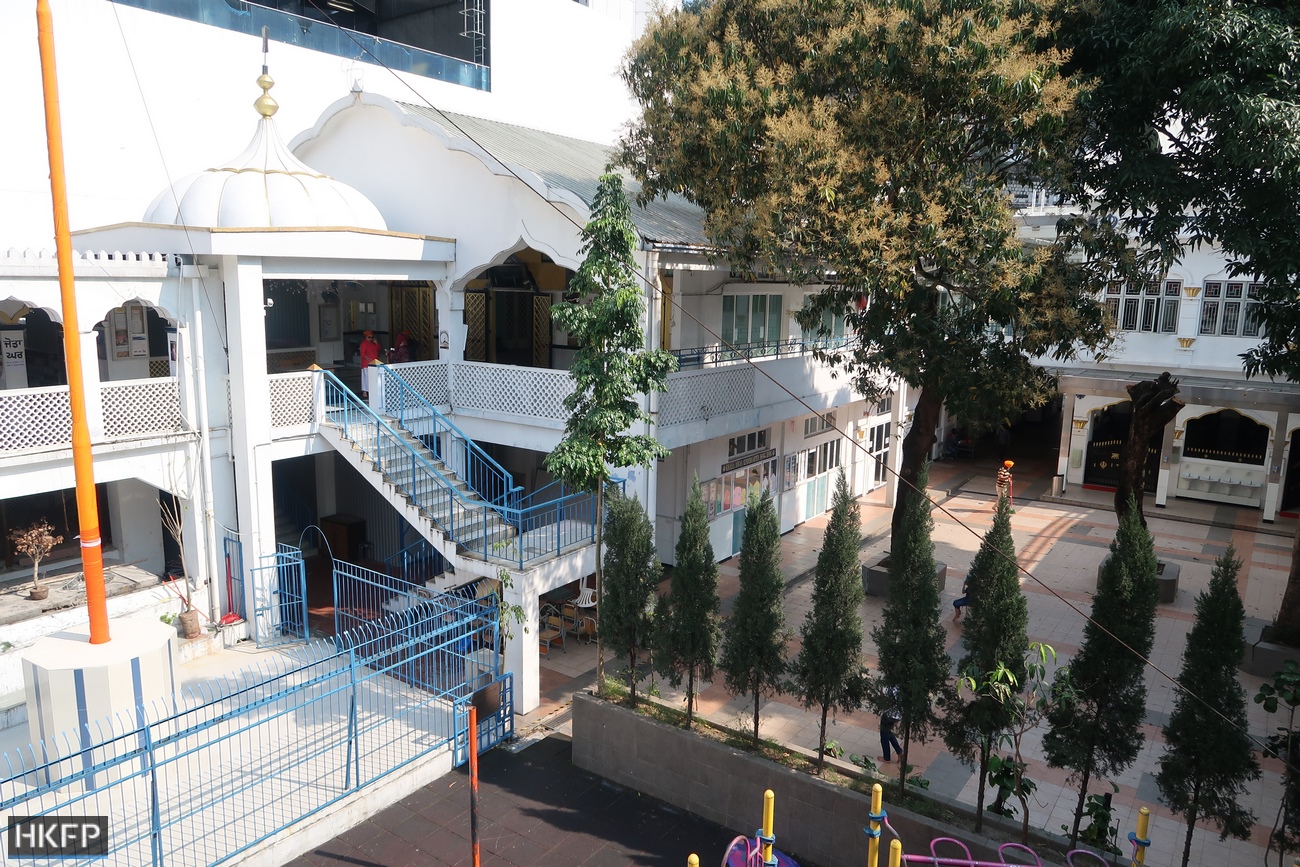 “When you pass this fence,” he said, “it is not Hong Kong anymore. It is India.”