A Chinese newspaper commentary has mocked the female football coach of Hong Kong’s Eastern Sports Club in the wake of its 0:6 loss to mainland champions Guangzhou Evergrande on Tuesday.

The city’s league champions called the banner a case of “suspected racism.” “As the first female coach in the world to lead a men’s football team to win a league title, she has played the role of being the subject of ‘chicken-broth’ [heartwarming] articles for a long time,” read the commentary.

“As a football club with a long history, Eastern has fallen to being coached by a female coach with zero Asian Champions League experience. This is lamentable for Hong Kong football!”

“Hong Kong is an Asian financial centre with thousands of wealthy people, but nobody truly wants to invest in football.”

Eastern confirmed on Wednesday that the AFC was investigating the controversial banner unfurled by some travelling supporters in the dying moments of the game at Hong Kong’s Mong Kok Stadium. The club called it a “suspected political and racist banner,” and said it was confident that the governing body would investigate the incident without bias and take action.

Reuters reported that the AFC would make a decision on any further action over the coming days, after receiving a commissioner’s report on the match. 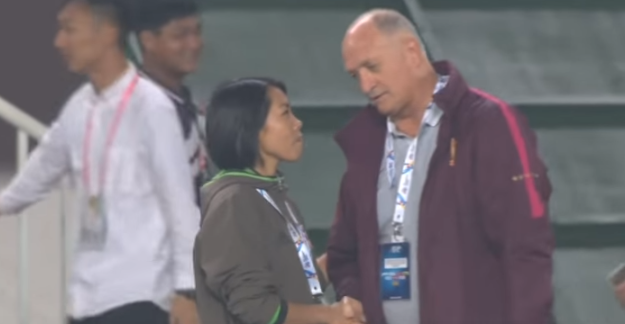 Chan Yuen-ting (left) at the end of the Mong Kok match.

Eastern added that it had written to the AFC regarding the banner at Tuesday’s game, as well as an incident where players of both teams clashed at half-time.

Speaking to Apple Daily on Thursday, Hong Kong Football Association director Pui Kwan-kay said he did not agree with the controversial banner, but would “laugh it off.”

“Some people have different views, but I don’t support this, because it will increase tensions between Chinese and Hong Kong fans.”

“After all, it is a provocative banner.”

Evergrande fans were filmed singing Chinese national anthem numerous times during the course of Tuesday’s game, which received boos from some Eastern supporters. One local fan was seen to have raised a colonial-era Hong Kong flag.

Fans from both sides attempted to confront each other but were separated by advertising barriers and security personnel at the sidelines.