Opened in 2013, the Kai Tak Cruise Terminal is located at the southern tip of Hong Kong’s former airport. The giant structure spans four storeys and 184,000 square metres of floor space, and is capable of berthing two ships at once. 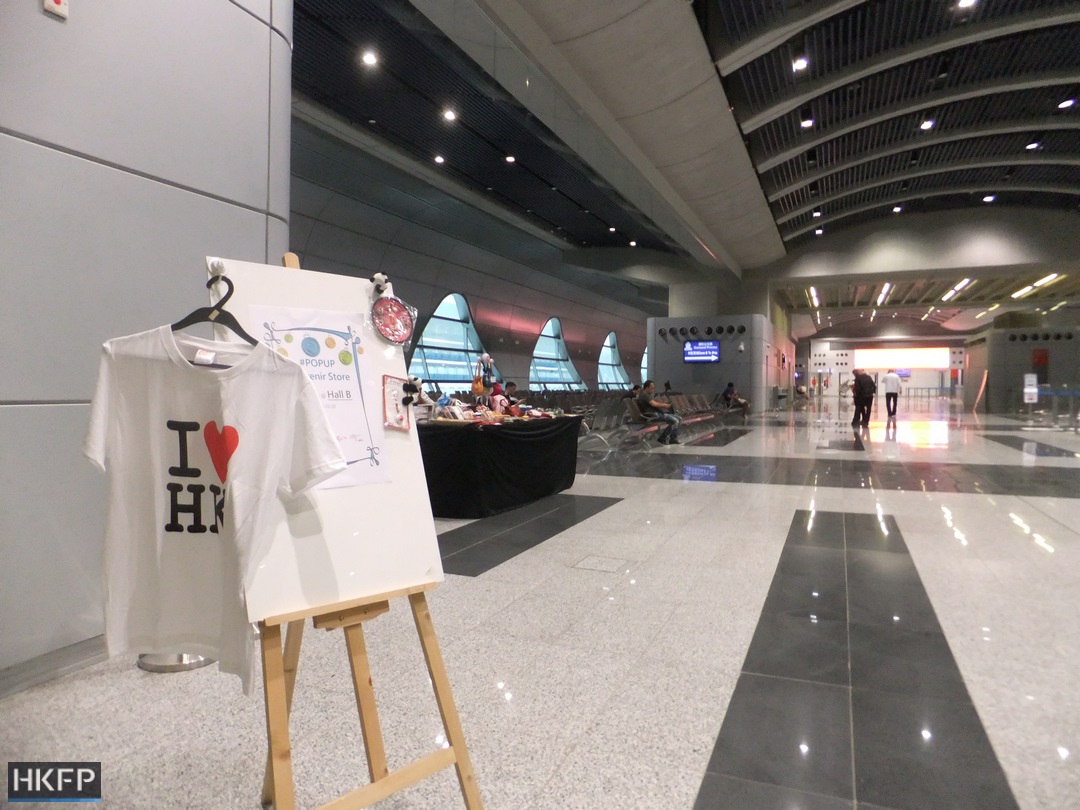 Since its inauguration, however, the terminal has been criticised repeatedly in the media and by lawmakers, as being under-used and not attracting enough visitors. On some days, the massive building appears practically empty.

Operator Worldwide Cruise Terminals rejects this criticism. Managing director Jeff Bent cites a rapid increase in passengers, the winning of numerous industry awards and the hosting of a large number of events – whereas other terminals around the world simply shut down on days when no ship calls. 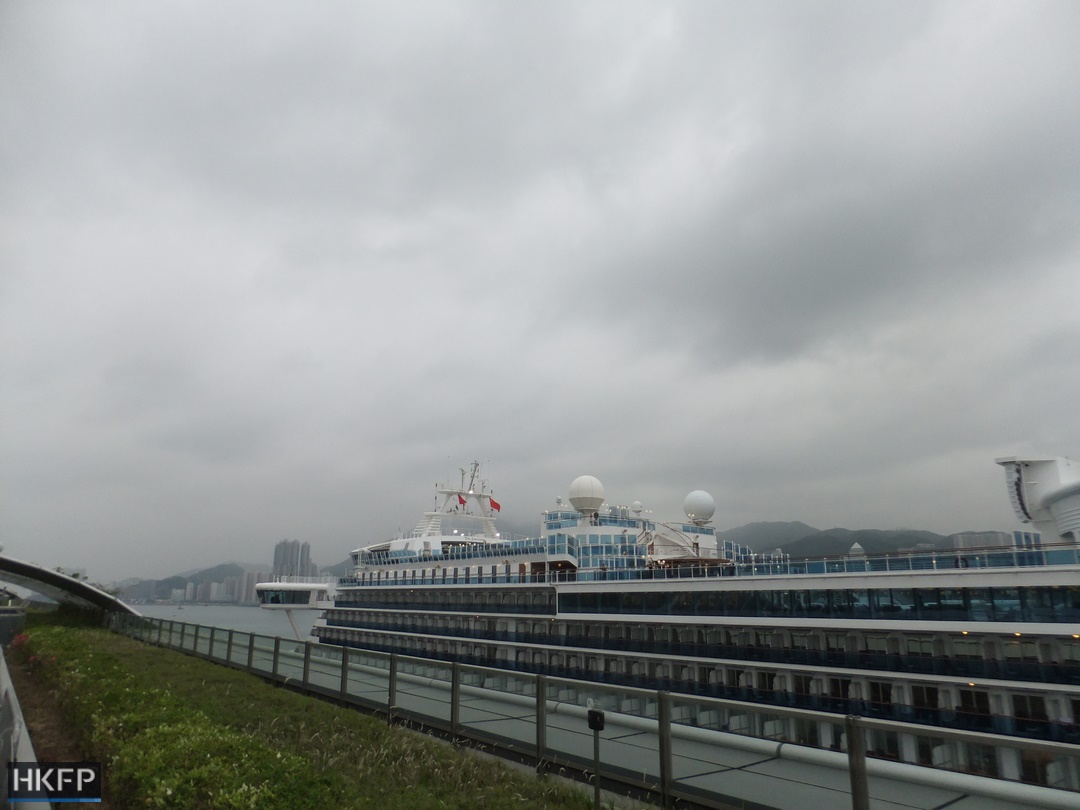 Where, then, does the problem lie?

During HKFP’s visit, photographer Jill Carter was using Kai Tak’s government-managed rooftop gardens as a shooting location. “For a family to come and do a photo-shoot this is a nice place,” she said.

“It’s a bit deserted,” she added. “A waste of investment.” 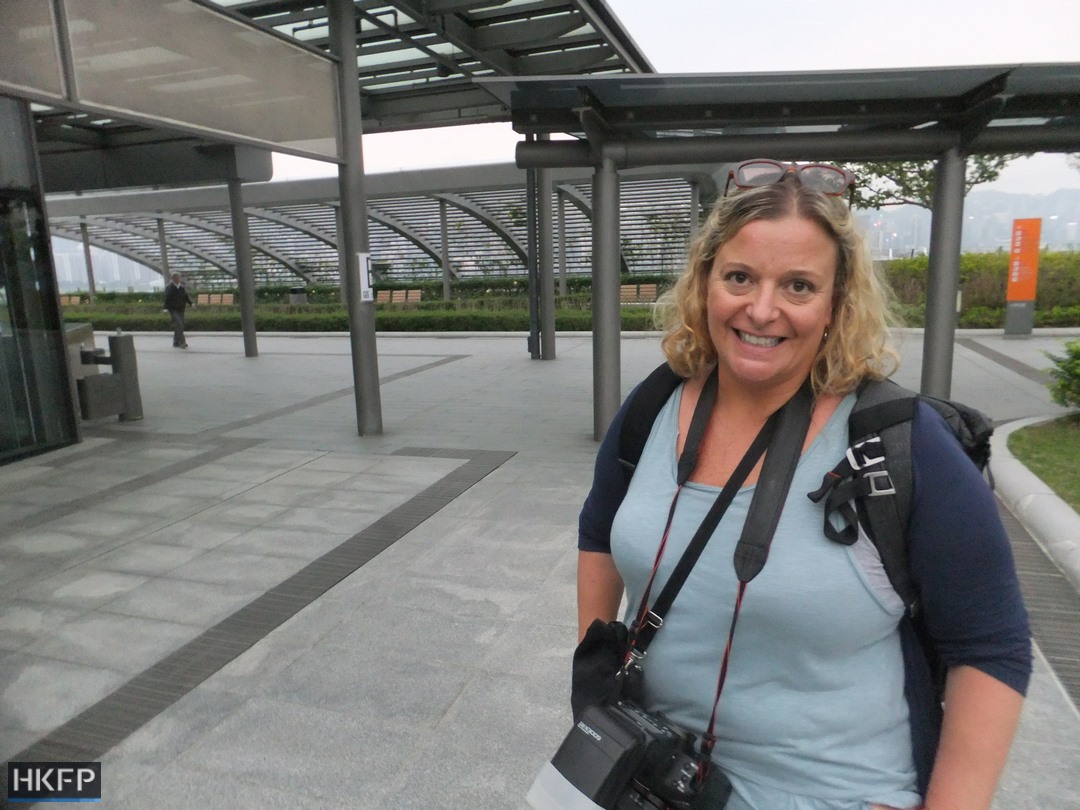 “I don’t know the exact figures, but just take a look for yourself,” added one cleaning staffer who declined to be named.

“I wouldn’t say there’s nobody, but there’s not too many people either,” added a security guard.

In total, HKFP counted fewer than a dozen people – excluding staff – at the gardens during a visit on Wednesday afternoon. There was a slightly larger congregation at the terminal and commercial area at the floor below, with the Diamond Princess berthed for the entire day, but most of its passengers had departed for the city. 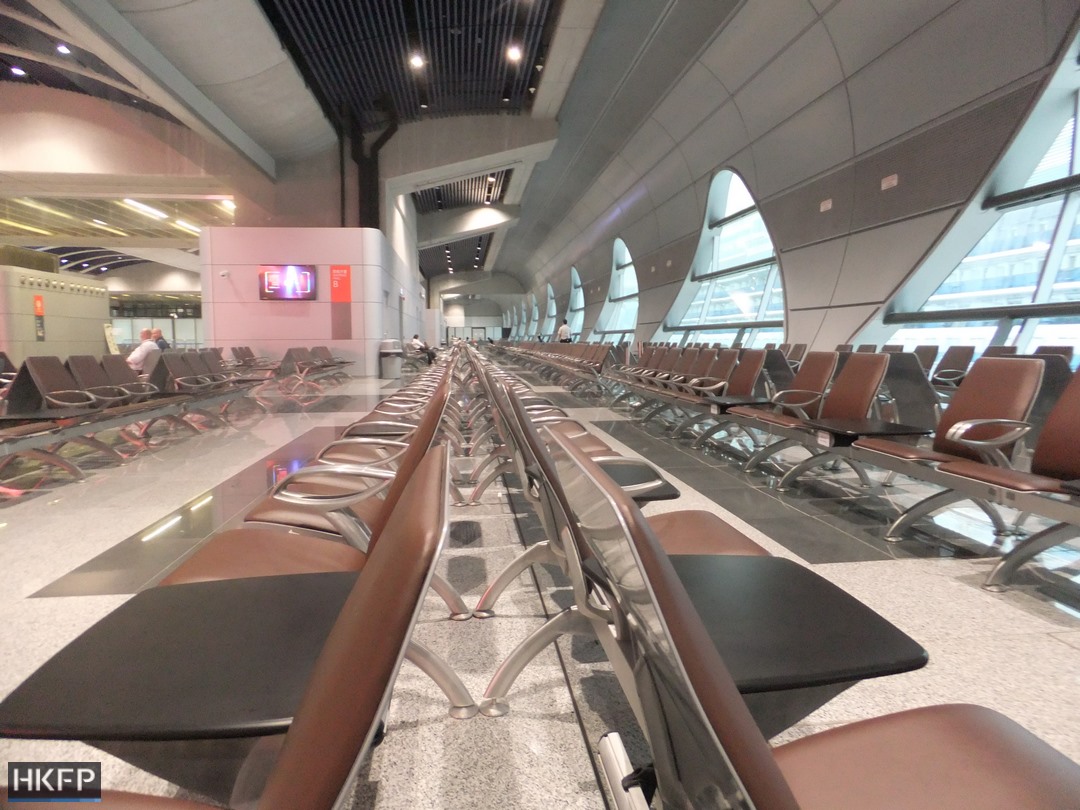 One end of the terminal houses Cafe Aberdeen, which serves local food, and the lavish Federal Cruise Banquet Centre. The former only opens for lunch, the latter only for dinner.

“Usually there aren’t many people,” said a member of staff at the banquet centre. “But we hold a lot of private parties here.” 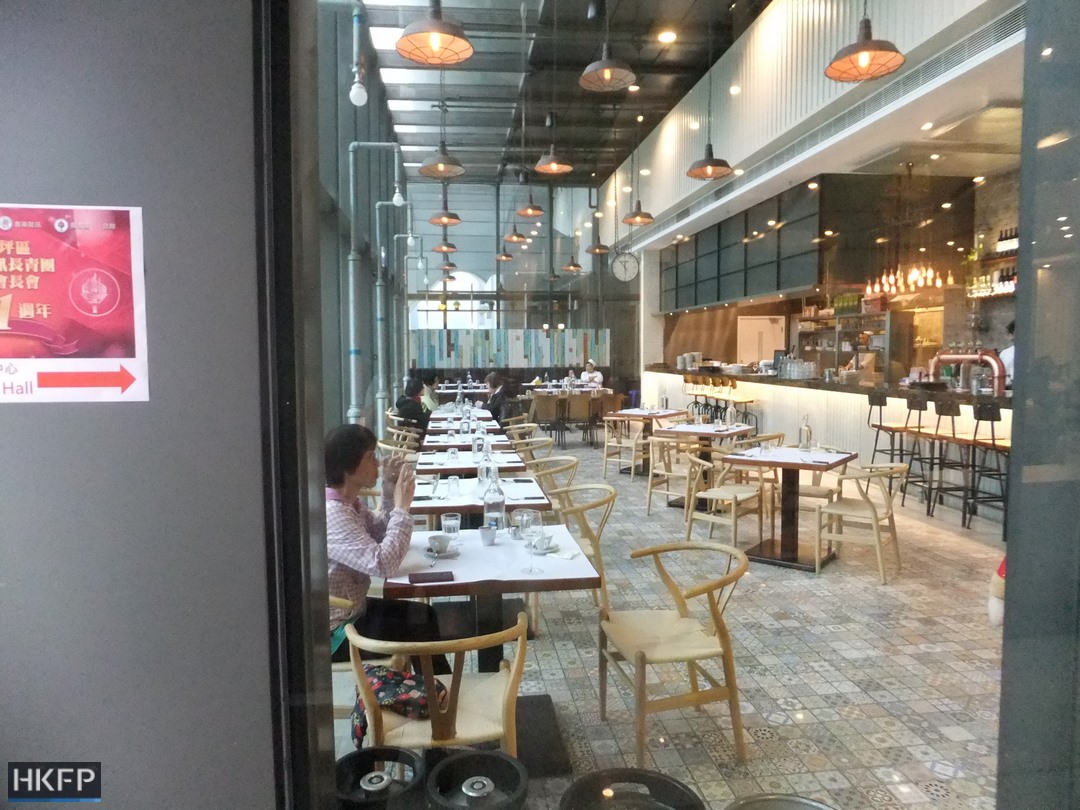 The other end of the terminal used to offer luxury retail shopping – Kai Tak Cruise Plaza. But the retailer ceased operations in June 2016, following complaints of late salary payments and a winding-up petition.

A spokesperson from the Tourism Commission told HKFP that Worldwide Cruise Terminals is taking legal action to recover the store, while the operator declined to comment. 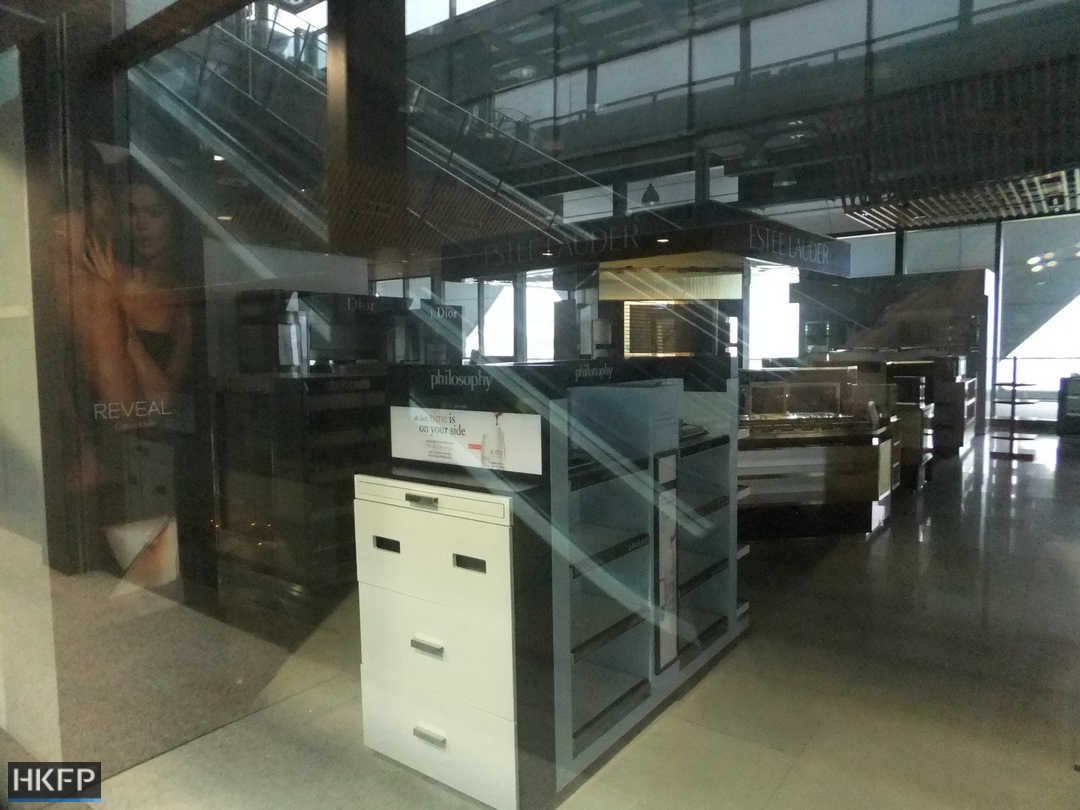 The car park further down the building also does not appear to be widely used – save for several Tesla charging stations at which electric vehicles were parked.

The Kai Tak Cruise Terminal can also be viewed as a nascent hub for Hong Kong’s tourism industry. At the time of its planning in the early 2000s, the government argued that a new terminal was needed in order to increase the city’s berthing capacity. 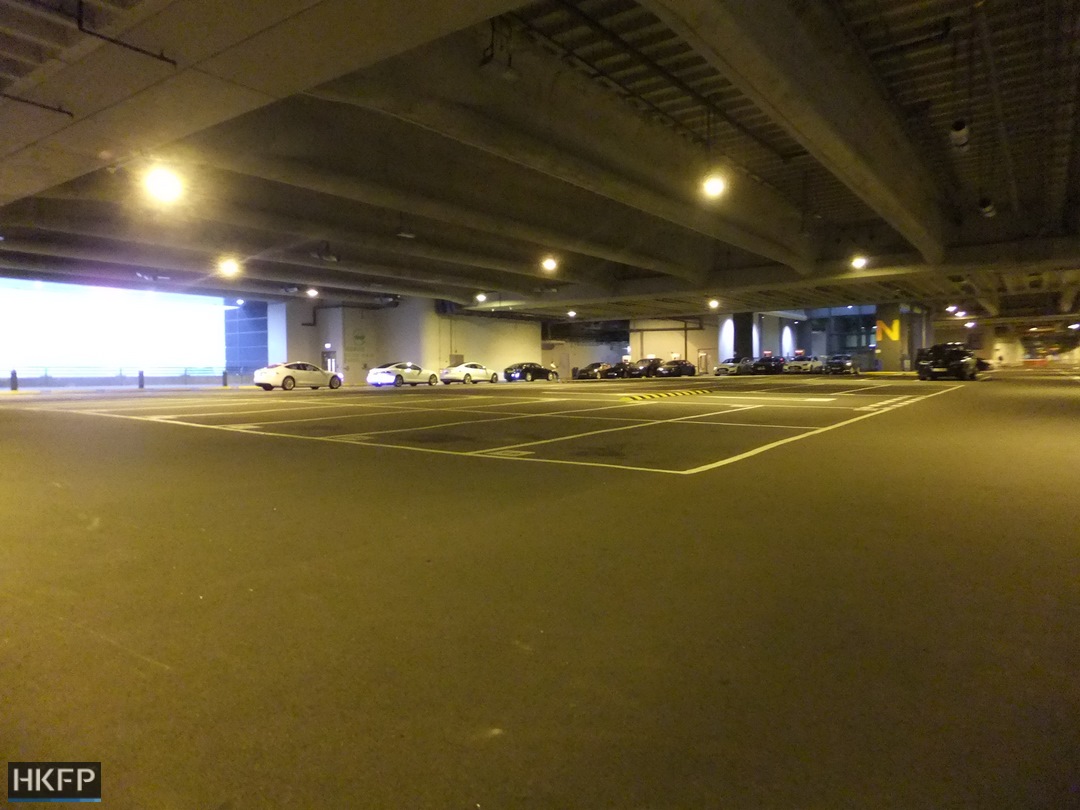 Worldwide Cruise Terminals projects the arrival of 550,000 cruise passengers this year over 213 days of confirmed ship calls. This represents a five-fold increase from the terminal’s first full year of operation in 2014. A record four ships berthed at the terminal on a single day on March 19. 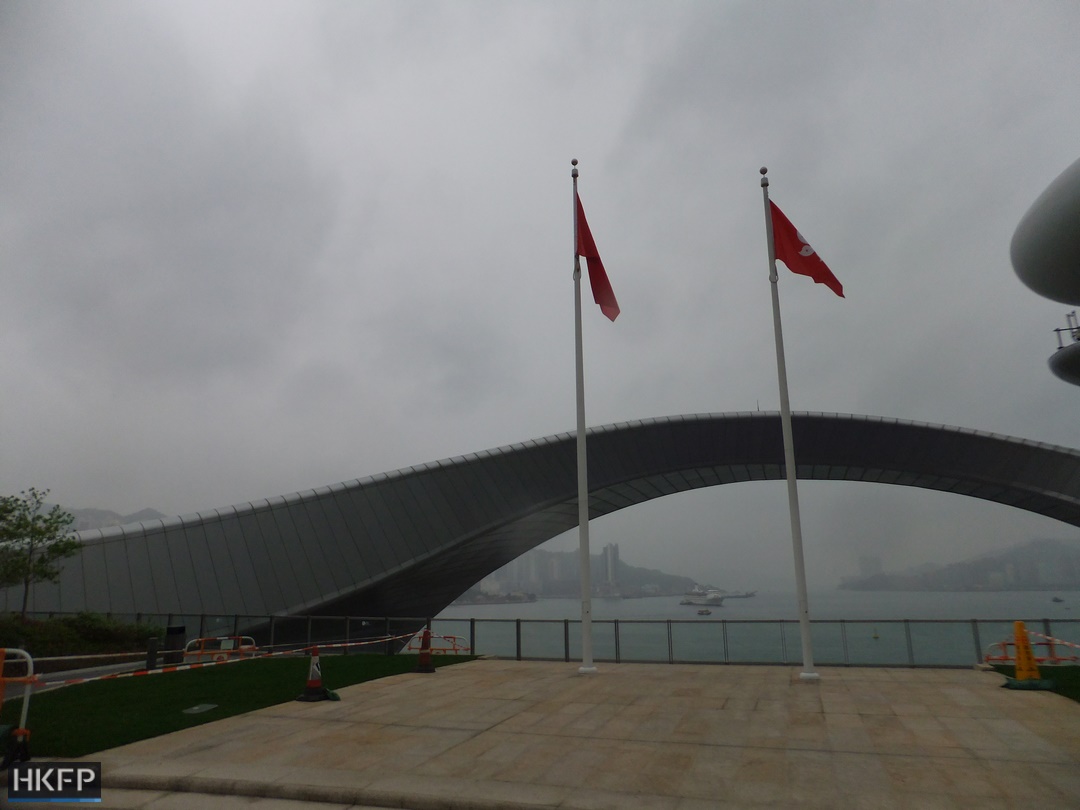 “The entire commercial area of the cruise terminal, at 5,600 square metres, represents around 6 per cent of the indoor space under our management.” 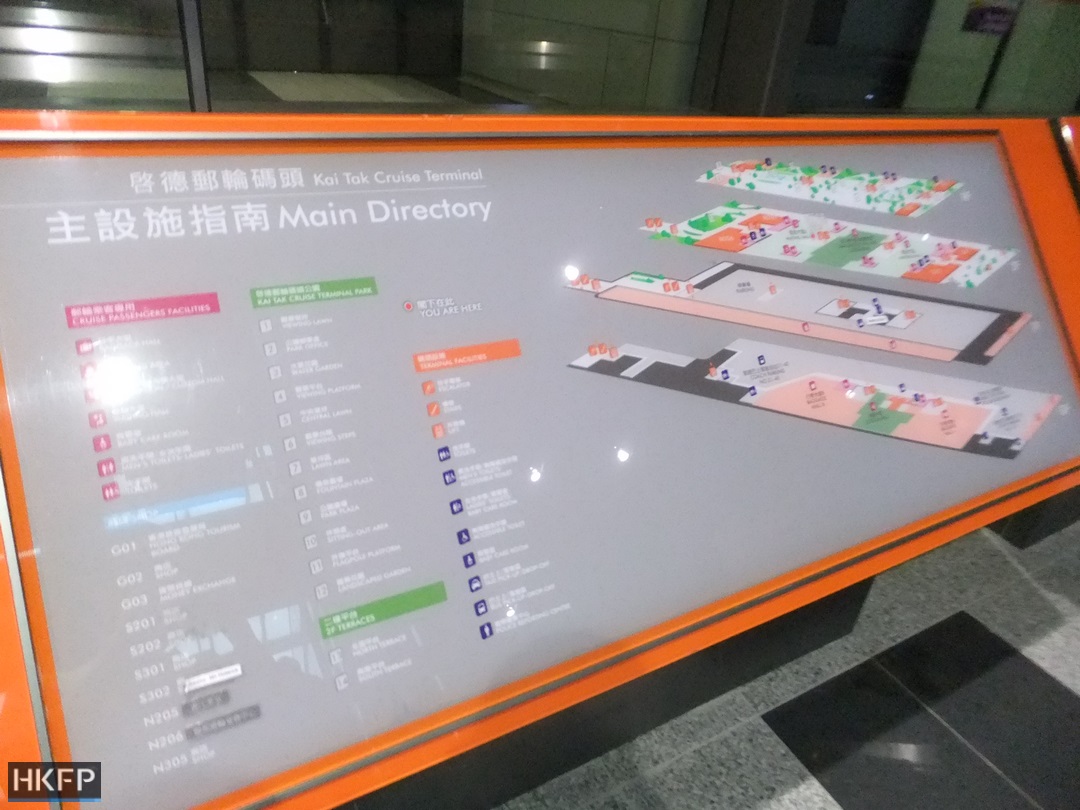 “It is not a shopping mall,” he added. “It is more akin to a museum with a gift shop and cafe in terms of the space allocated as a proportion of the whole.”

“But, if the Kai Tak Cruise Terminal is being compared to another cruise terminal, almost all cruise terminals around the world are completely shut when no ship is at berth.” 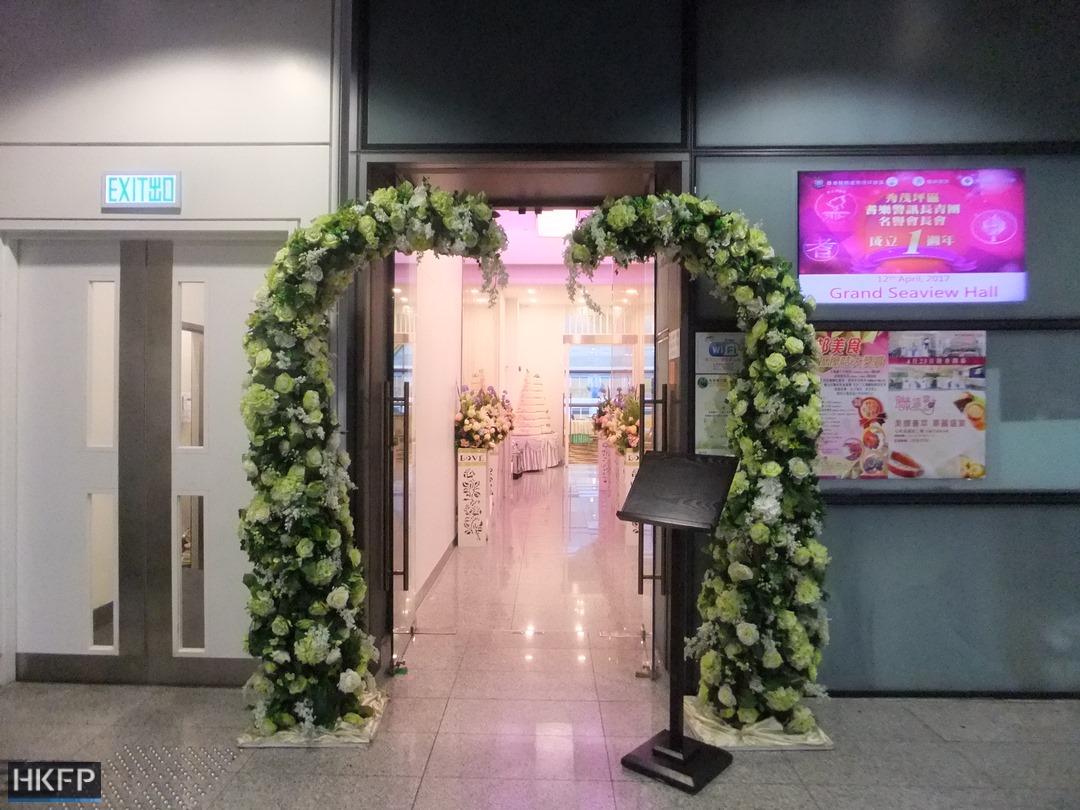 “The Kai Tak Cruise Terminal is open 365 days a year, has a ship at berth on average approximately every other day, all 12 months of the year, and also hosts many events… Most [cruise terminals] stage no events at all.”

Bent added that the terminal’s small number of restaurants have hosted over 20 banquets each month from January to March. It has also played host to events such as a private Justin Bieber concert in 2015. 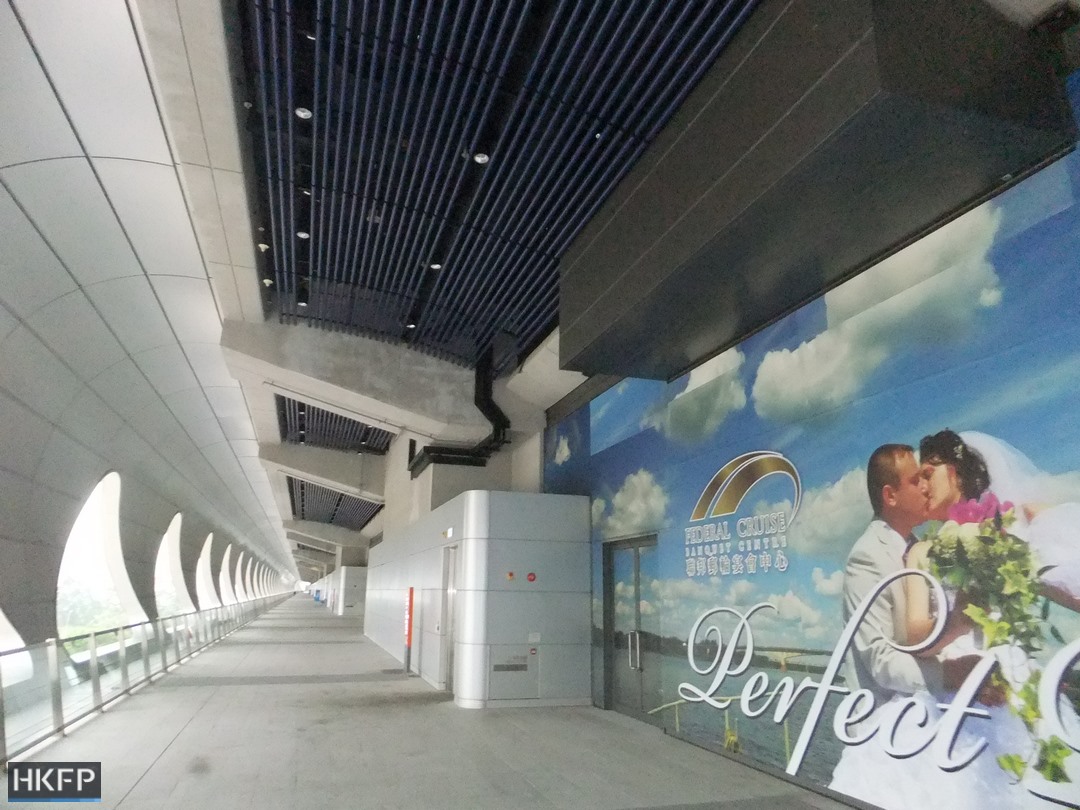 A Tourism Commission spokesperson added that half of the public events held by the terminal so far have been attended by 1,000 or more participants.

“Separately, the Kai Tak Cruise Terminal Park at the rooftop provides a good leisure venue for local visitors,” he told HKFP. “There are around 3,000 visitors at weekends and public holidays.” 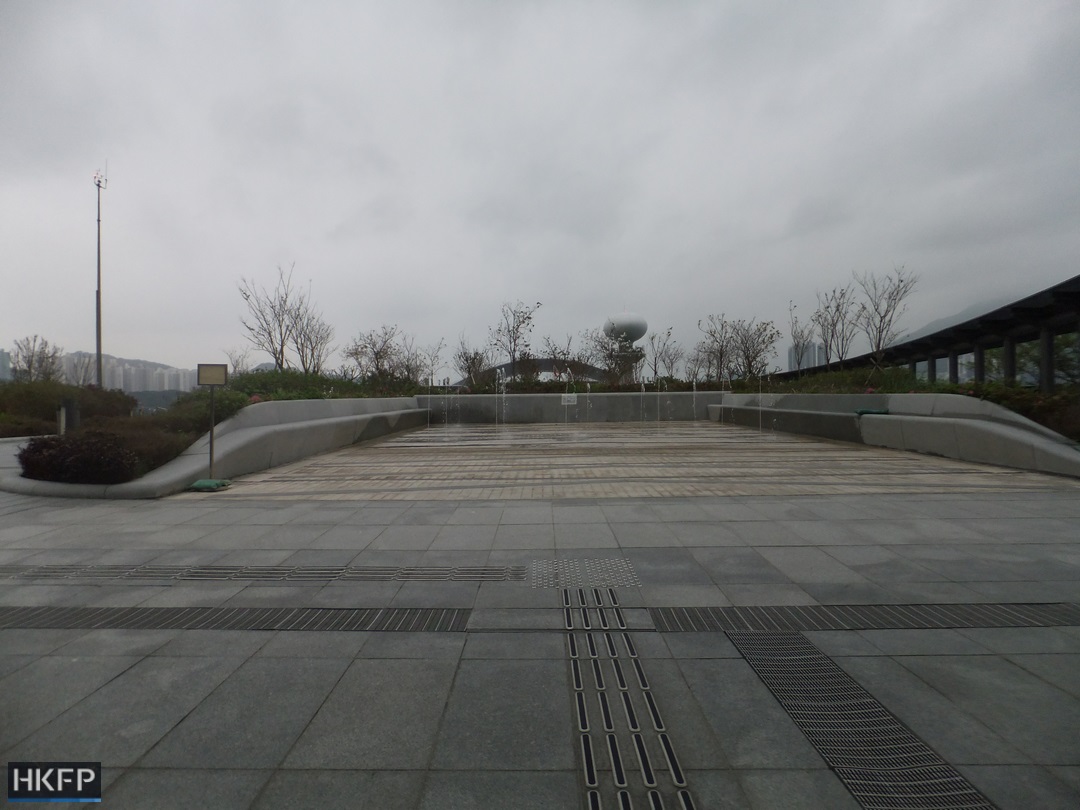 Yet critics also perceive the terminal to be unprofitable, given its HK$8.2 billion cost to taxpayers. According to the terms of the contract published by the Commerce and Economic Development Bureau, terminal operator Worldwide Cruise Terminals pays the government a fixed rent of only HK$13 million over ten years. 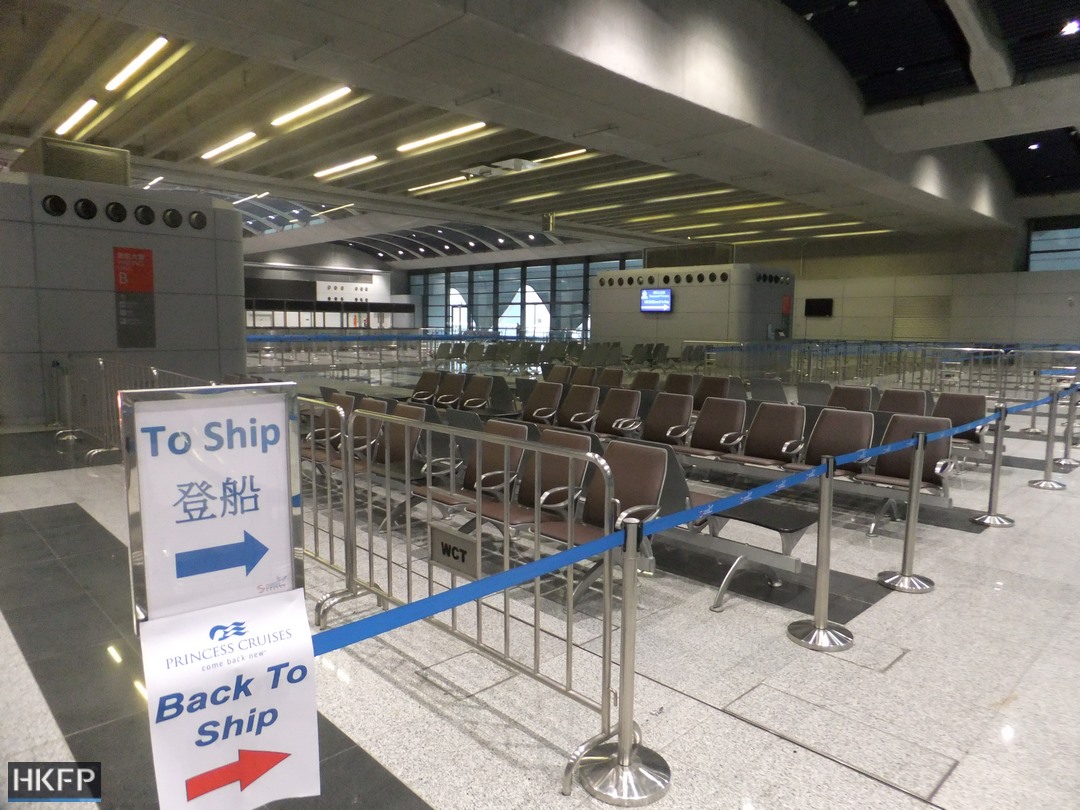 With the paucity of retail units, the Tourism Commission told HKFP that it has urged Worldwide Cruise Terminals to promote the terminal as an event venue. However, lawmaker Paul Tse has pointed out on several occasions that the terminal is difficult to reach, which limits its popularity.

At present, it is only served by the routes of one minibus (86) and one bus (5R) from East Kowloon, in addition to a ferry from North Point across Victoria Harbour. The bus only runs from 11am to 4pm on weekdays, and until 7pm on weekends. 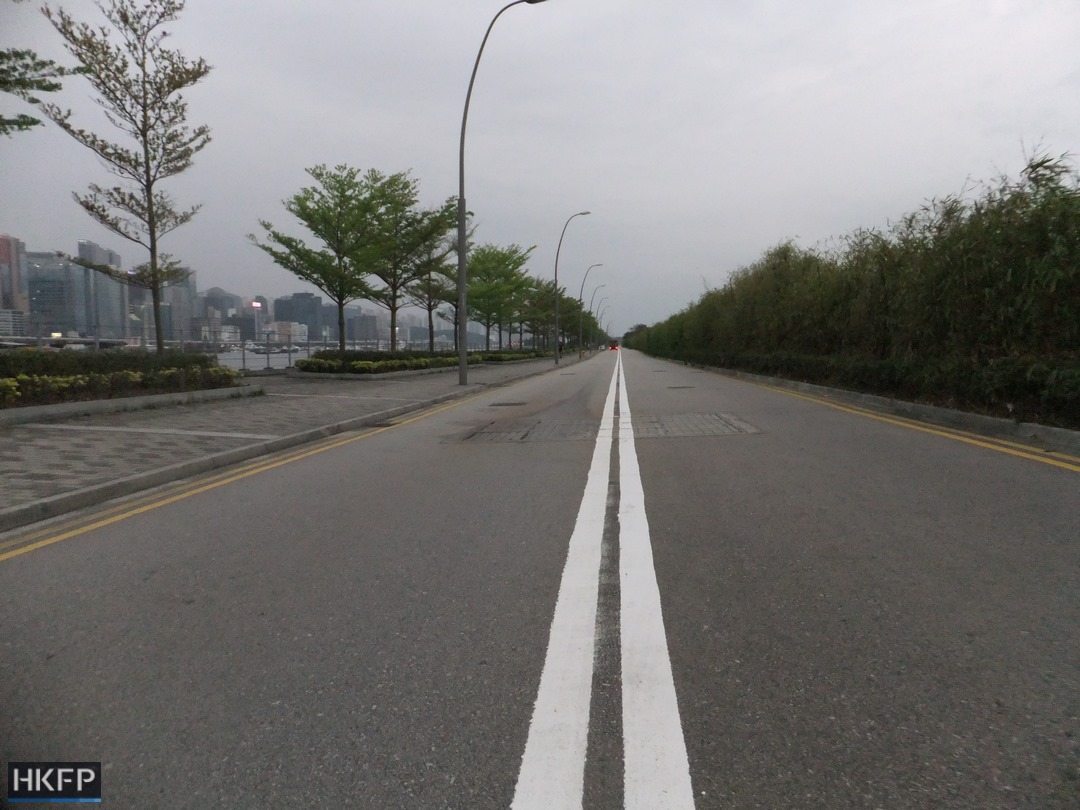 “This is a lovely place, but the biggest problem facing us is the lack of transport,” a staff member at Federal Cruise Banquet Centre told HKFP. Slide The City, a summer water park event, moved its location from the Kai Tak Cruise Terminal in 2015 to the Central Harbourfront the following year.

Construction of the Shatin-Central MTR line – including a station at Kai Tak – has been delayed, as have plans for a monorail system spanning the length of the old airport. 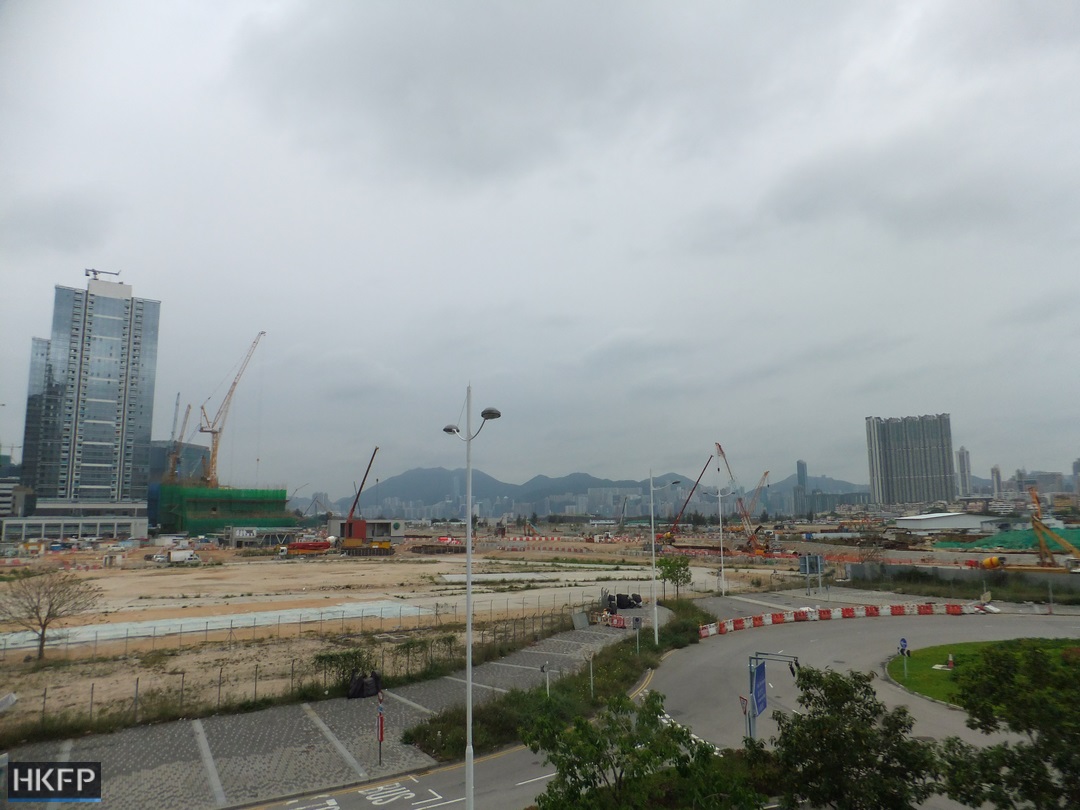 So it is not possible to travel directly from the northern end of the runway, where public and private housing has been constructed, to the south. The land in between has been planned as a metro park and a commercial district, but currently remains barren.

In 2012, public policy think tank Professional Commons drafted an alternative district planning proposal, “Kai Tak for the People.” It proposed increasing the ratio of public housing in Kai Tak, and moving the metro park and commercial facilities south so as to link them to the cruise terminal. However, this was rejected by the government. 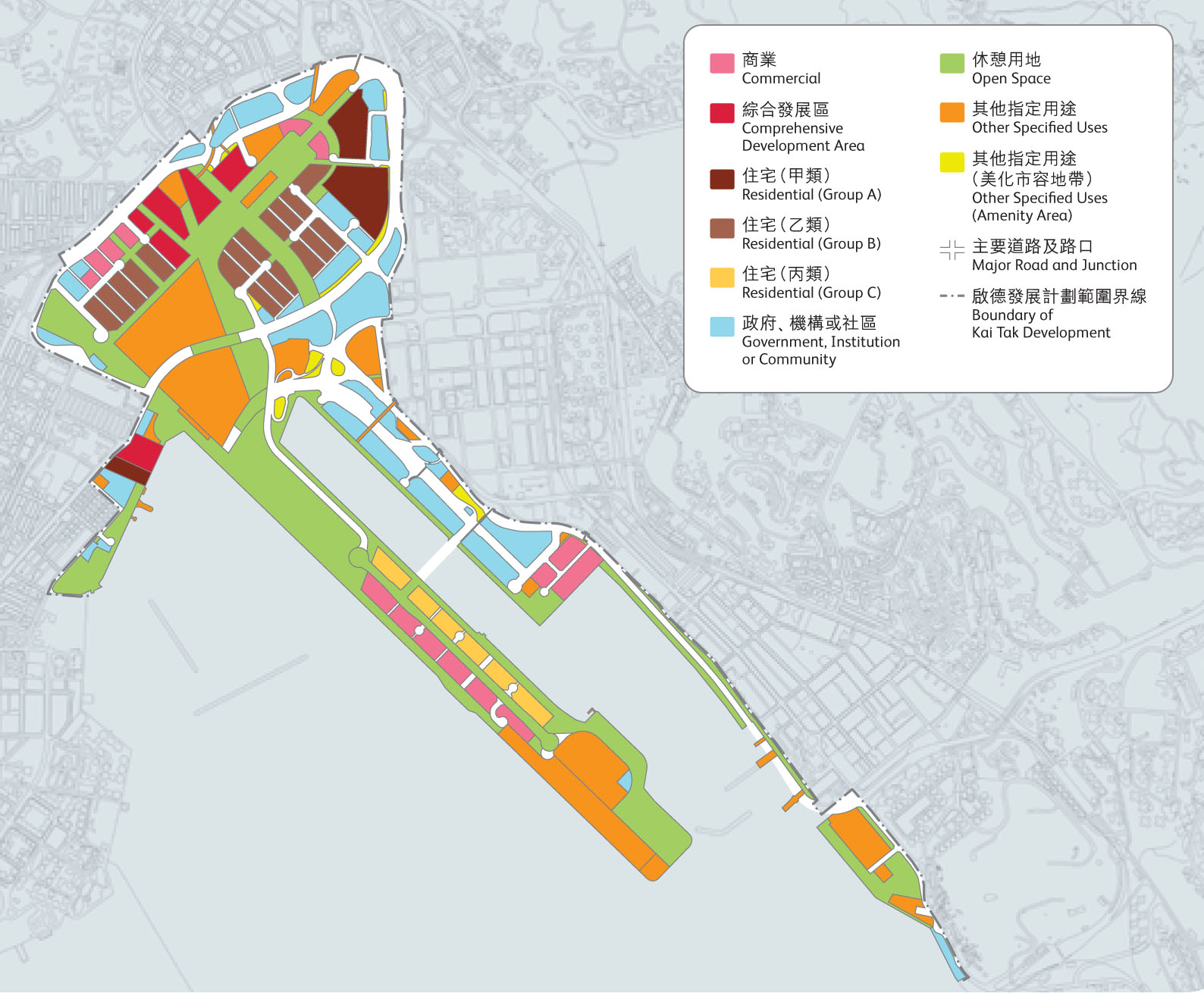 Commerce chief Greg So admitted the difficulties of attracting various types of transport to the Kai Tak Cruise Terminal in 2014. “We understand that the cruise terminal is Kai Tak’s first completed facility,” he said. “Before other facilities are completed, it does take a long time to arrive at the cruise terminal.”

Worldwide Cruise Terminals managing director Bent says that he is not in a position to solve these problems. 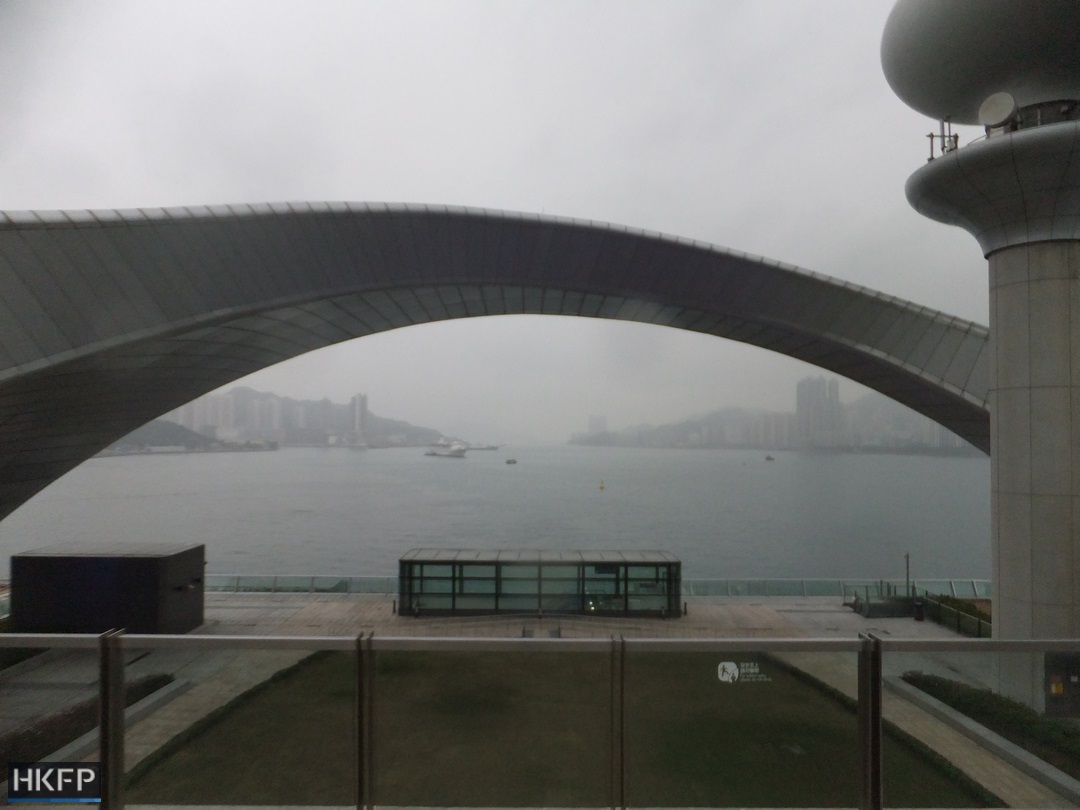 “We do not manage the district planning… or road and other infrastructure work in the district… or sale of adjacent lands… or public transportation like the bus, minibus, and ferry connections,” he said.

“We manage the cruise terminal. We have received many accreditations, industry awards, green awards, and CSR awards doing so.”

But until Hong Kong’s old airport cements a new identity, the Kai Tak Cruise Terminal will continue to divide opinion.

In Pictures: Kai Tak's new cruise terminal - another white elephant, or travel hub in the making?