Someone once said that being successful in the health food industry doesn’t mean offering healthy food; it means offering what people think is healthy food. Plenty of restaurateurs in Hong Kong seem to be thinking along these lines when marketing their restaurants as vegetarian. “A restaurant persistently adhering to the philosophy of vegetarianism“ would be a good, basic, one-sentence working definition of a vegetarian restaurant.

That restaurant definition could apply to other restaurant-marketed philosophies by replacing ‘vegetarian’ with the appropriate philosophy; e.g. halal, kosher or the vegetarian subtype that is veganism. Similarly it would apply to any business marketed on a philosophical principle, and not just restaurants.

Let’s start with a positive example. 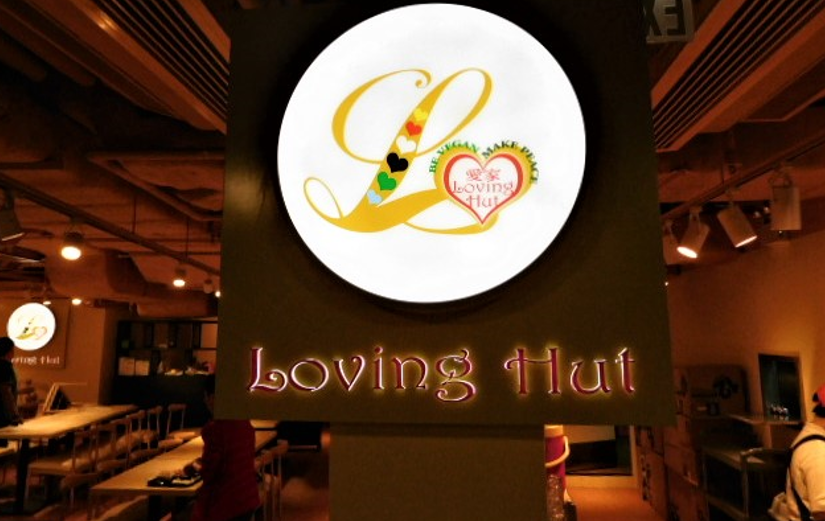 Christine Kwok opened her second Hong Kong branch of the Loving Hut worldwide vegan restaurant chain two weeks ago. On that day she calmly but firmly explained the standards she maintains to someone she was about to let into the kitchen:

“I have control of procurement. No product or ingredient makes it into our stock without being screened by me first. Unless I am satisfied it is genuinely vegan, the product doesn’t make it into our stock under any circumstances.” Two of the numerous traps for vegetarians:

* Dairy cheese is made by coagulating milk into cheese. Historically the most used coagulant is calf rennet. This pitfall is further complicated by a coagulant called FPC manufactured by the GMO industry since 1990. FPC is bio-engineered with spliced animal genes from rennet. This VRG article states food companies market FPC coagulated cheese as vegetarian and non-GMO. There are no such concerns with dairy-free cheese.

Another concern is restaurants with menu icons for dishes that contain egg and/or milk. Ingredient marking sounds like a positive concept for menus. However the icons are often applied with about as much rigour as throwing a hedgehog at a dart board. This is a hazard not just for vegans but for people with allergy risks.

When a pitfall is mentioned, different restaurants respond in different ways. Home Eat To Live opened in 2016 as a vegan-friendly, all vegetarian-marketed restaurant. Owner Christian Mongendre was asked about the booze. He promptly turned to his Assistant Manager:

“Marion, can you help me please and get it checked out to make sure that all our booze is genuinely vegetarian?”

“Leave that with me Christian.”

Marion reported back that all their booze is confirmed vegetarian. She also said they’d upgrade the wine to a brand that like their beer is also vegan.

It’s not always like this though. Orchid Veggie were asked about their wine and cheese. Bonnie Lau in their management office excellently said they’d switch to a vegan brand to eliminate any risk from cheese. However despite encouragement she gave no interest in screening wine as vegetarian. Here is the crux. When a restaurant takes one liberty can they be trusted elsewhere? 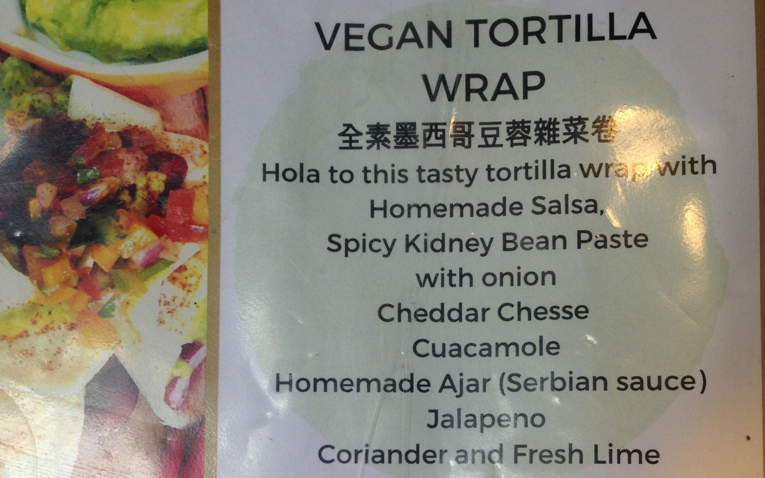 Bookworm Cafe are often criticised in social media for selling a vegan wrap (above) containing non-vegan cheese. On following this up at Bookworm they were asked if the cheese on that vegan marketed wrap was vegan.

They confirmed it isn’t. This is especially extraordinary since Bookworm Cafe is a handful of doors from Just Green retailing Daiya vegan cheese.

The arrows show how close Bookworm Cafe is to Just Green.

Attempts have been made to engage the Hong Kong authorities for support. The Consumer Council say this isn’t in their remit. The Food and Environmental Hygiene Department seemed a decent option for allergy risks. However they replied saying allergy risk is only in their scope for packaged food. However they did action hygiene inspections at Bookworm Cafe and Inno Veggie. While nice of them, this missed the intended point.

The Customs Department are responsible for investigating misrepresentation and false advertising. After numerous attempts to have them engaged they eventually agreed the evidence passed to them for one restaurant was sufficient to record a sworn statement to press for a court case.

Bated breath to see if a court case materialises. The meeting with them was invaluable. It’s priceless now to have a decent idea of the evidence needed for a case to go forward; Thank you Customs people, revised complaints with better evidence will follow soon.

Stevie Go is creator of the vegan blog hkveg.wordpress.com.

Update 17/5: – A previous version of this article correctly stated that Ahimsa Buffet had not checked whether the Anchor cream cheese they use is vegetarian or not. Anchor Cream Cheese Traditional Style is, in fact, vegetarian.