Perched at the foot of Hong Kong’s famous Lion Rock, Home Ownership estate Tin Ma Court was built in 1986. Its five blocks are home to some 2,800 families, served by a shopping mall, a carpark and rooftop gardens. 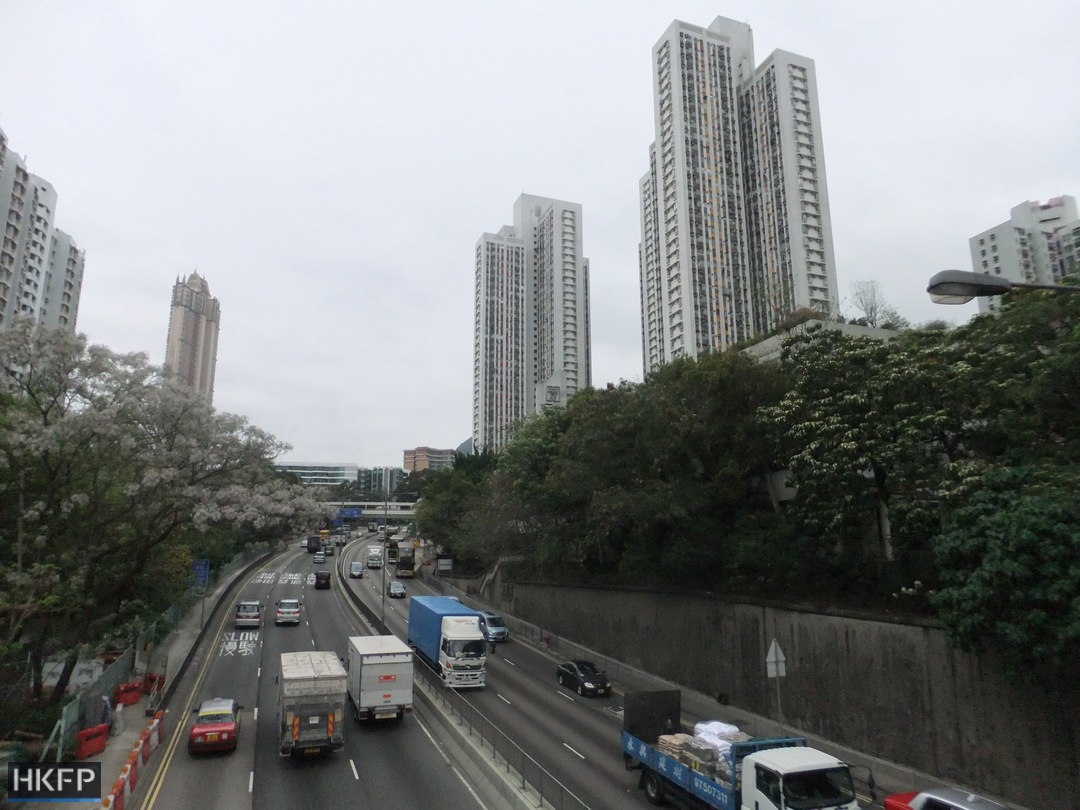 The public facilities were originally owned and managed by the Link Real Estate Investment Trust (REIT). The trust sold the assets to a new owner – ExcelSkill, a subsidiary of property investor Vantage International Holdings – in June 2016. 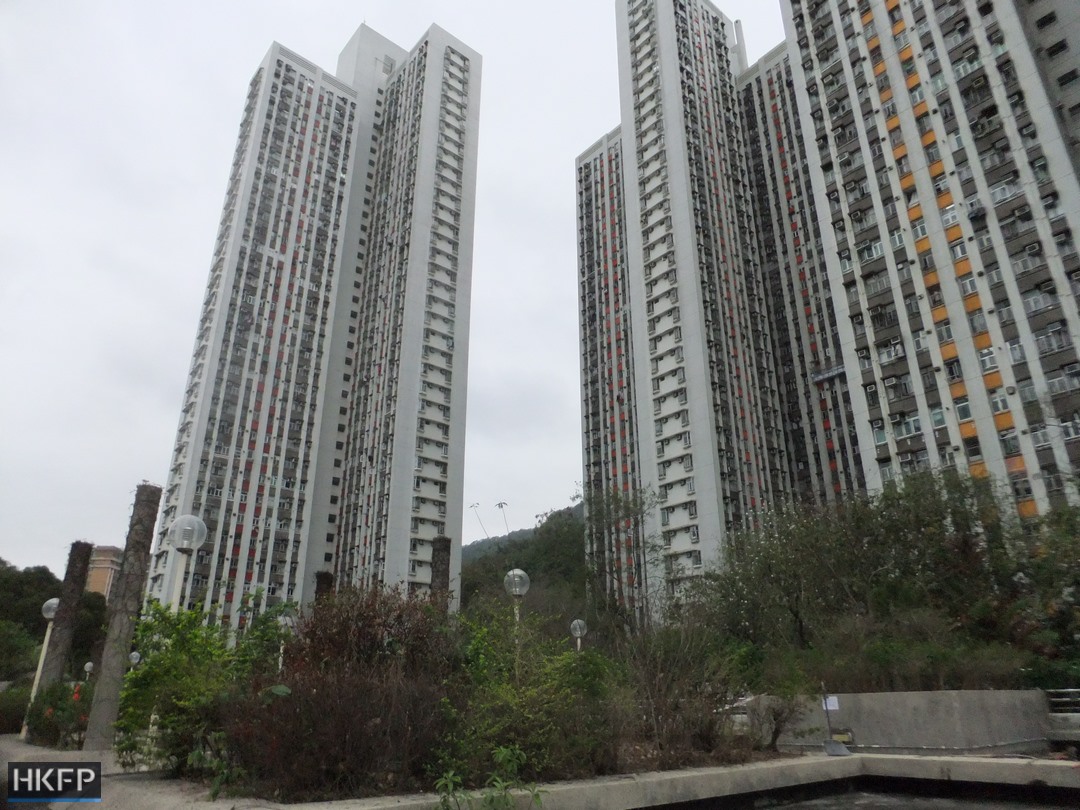 Since last June, however, Tin Ma Court has been suffering a slow death. 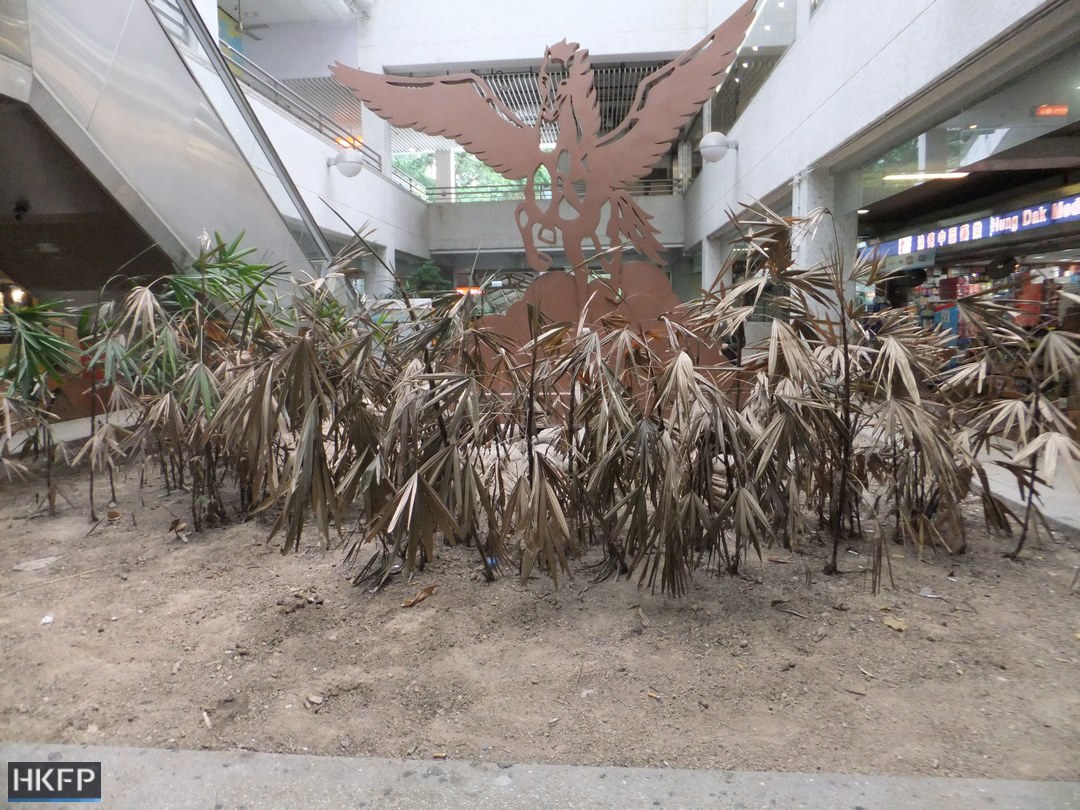 Mrs Cheung, who has run a pharmaceutical store for four years, told HKFP that the escalator leading to her unit has been shut down for over a month, meaning that residents have to walk up staircases.

“It’s really difficult for the old people,” she said. “There’s fewer people around [the mall]; it’s getting harder to do business.” 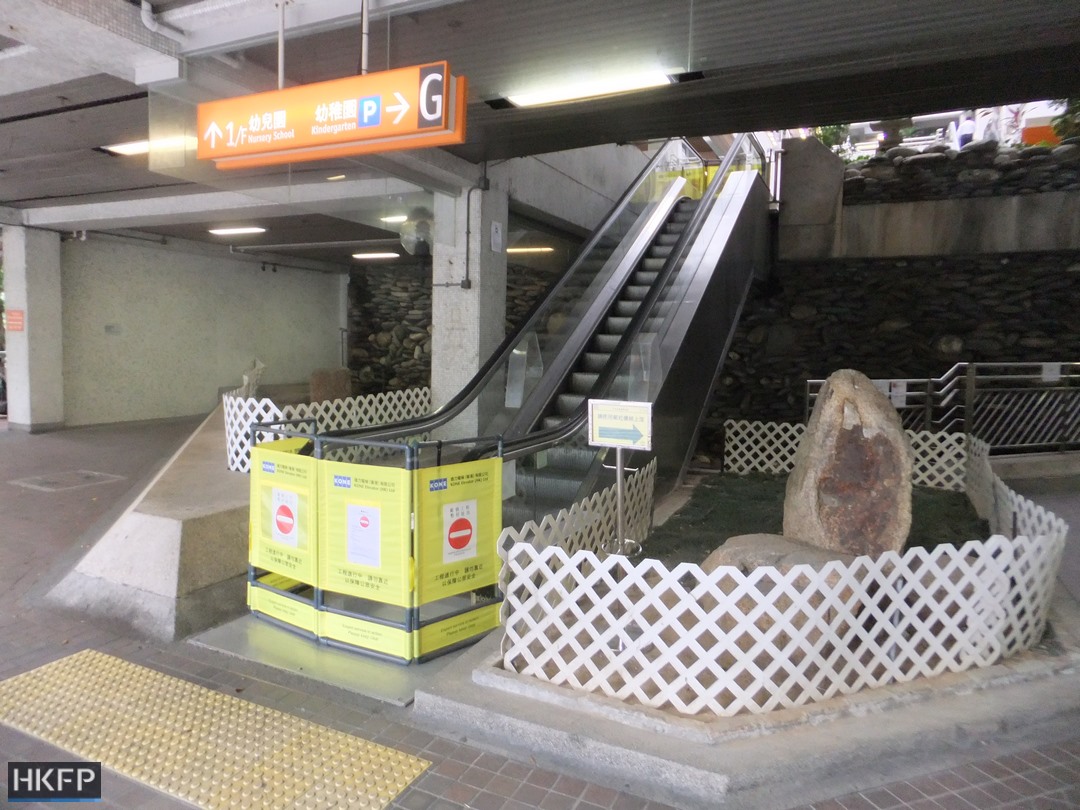 Inexplicably to the residents, however, Guardian has also increased management fees for shop owners – from HK$4.5 to HK$6.5 per square foot. 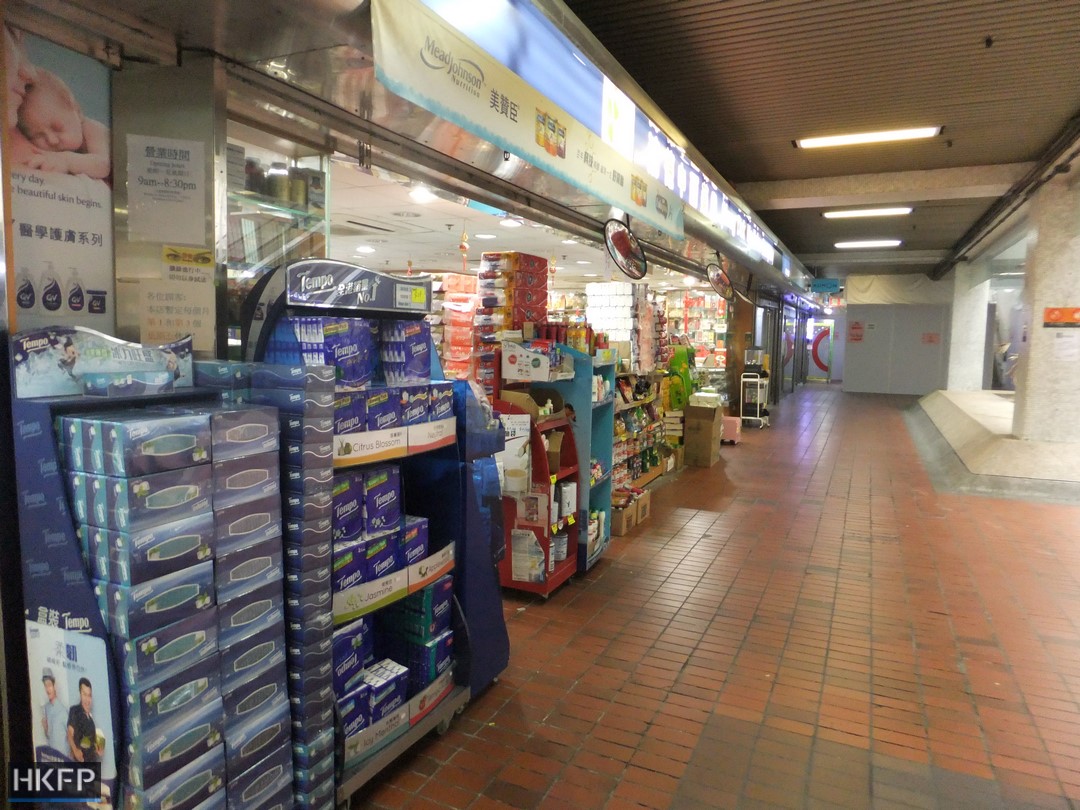 Cheung did not know why this happened. She said that Guardian has attributed the fee hike to its expenditure, but said the company refused to explain further, citing privacy.

“They can’t just hike the fees in a single blow like that… They can’t transfer whatever expenditures they have to the store owners.” 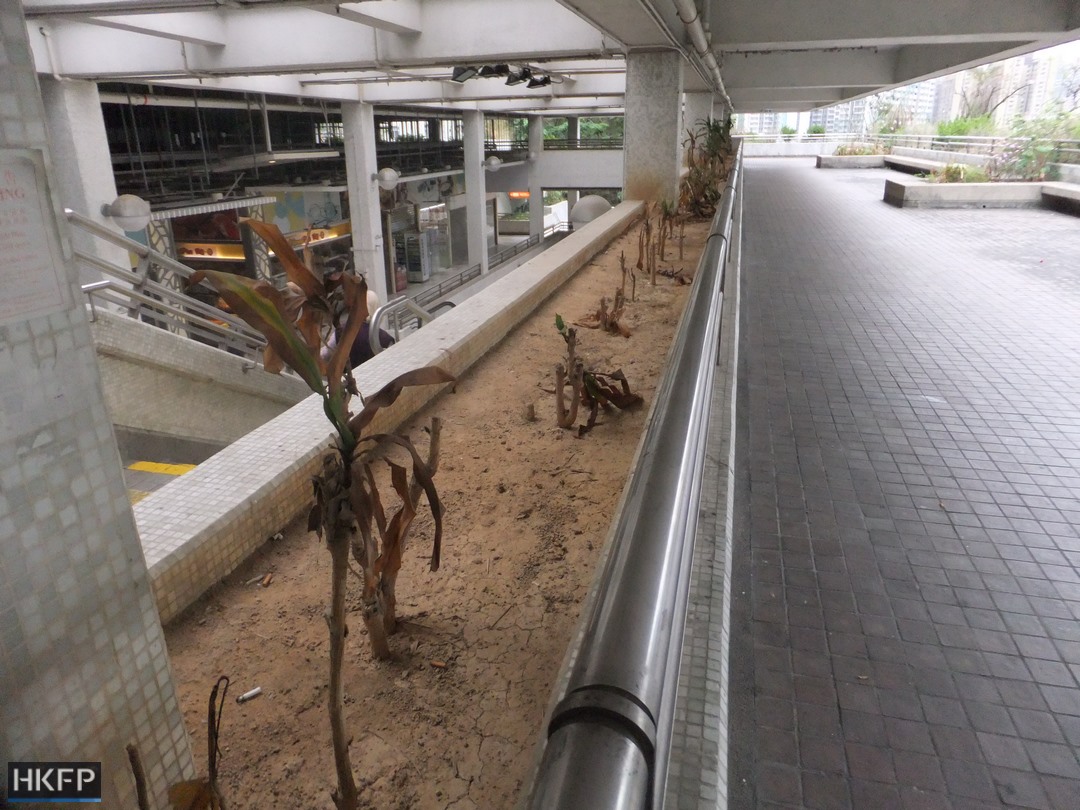 Cheung added that it was not only local residents and shop owners who had grievances – parking fees at the lorry unloading zone have also been raised. “Even the transport guys have it tough,” she said.

Last May, Vantage sparked protests when it announced on the eve of acquiring the Tin Ma Court facilities that parking spaces would no longer be allotted to car owners on a fixed lease – drivers would have to find a parking space each time they returned home. 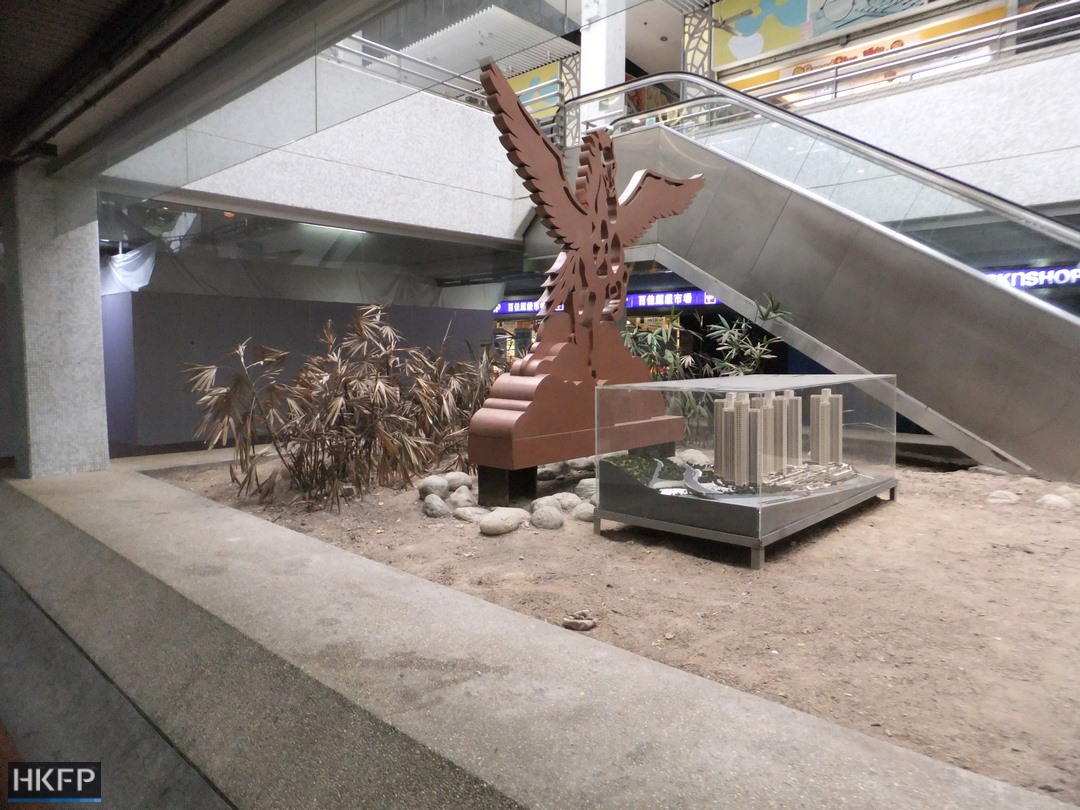 The final blow came when several shop-owners received notices that their leases would not be renewed. 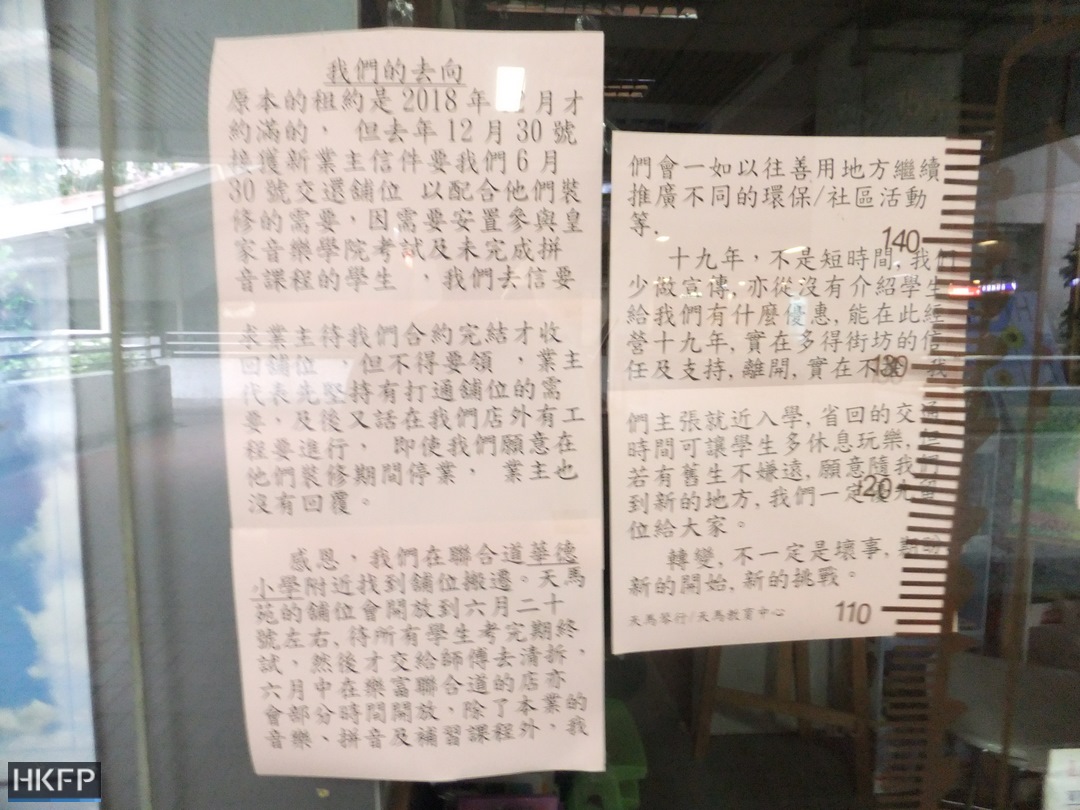 CEO Yau Kwok-fai also told Ming Pao last week that the company would try and move all existing shops to one floor of the mall when renovation works begin. 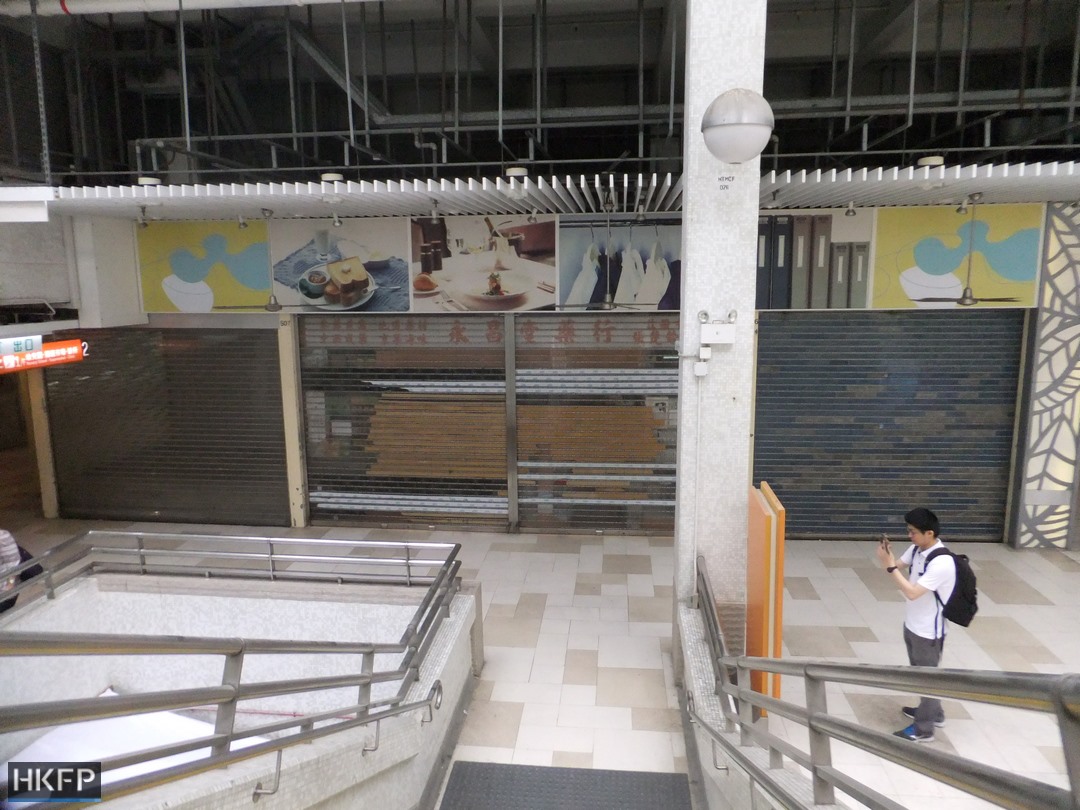 However, the tuition centre said that it would relocate to a site near Bishop Walsh Primary School on Junction Road – a 20-minute walk away. “Though we were willing to pause our business when renovation works take place, the owner still has not replied,” read its notice.

Most of the shops in a once-vibrant mall have closed down since last year. 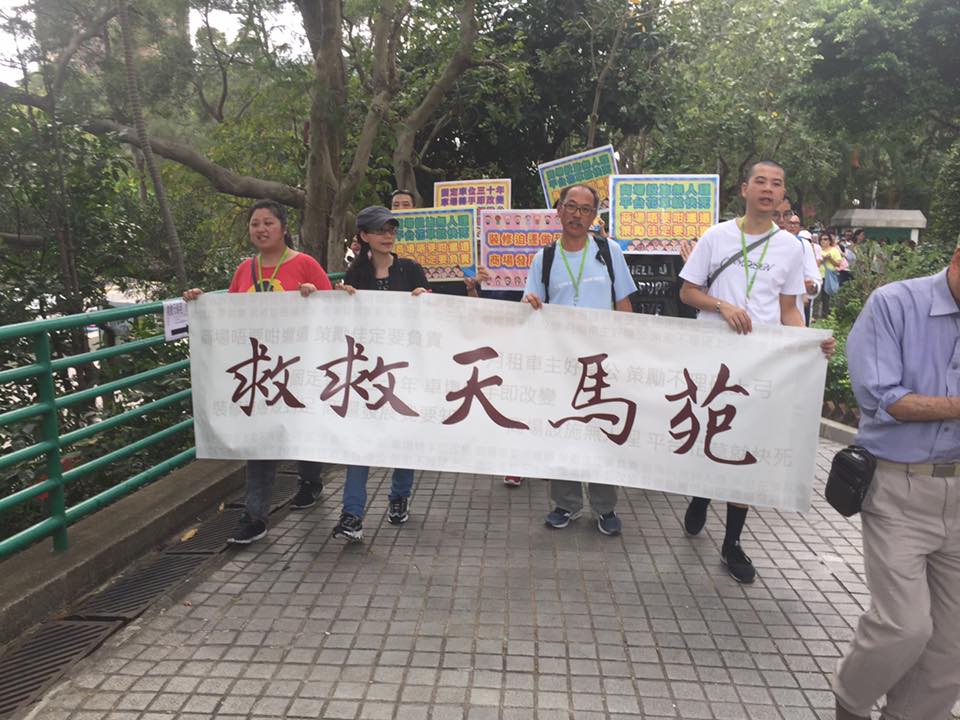 But residents have hit back, forming the Alliance Saving Tin Ma Court.

Last Sunday, some 400 residents demonstrated around the estate, calling for intervention from the Housing Authority. They called on chief executive-elect Carrie Lam to take notice of the situations of the properties sold by original owner Link REIT.

Local Liberal Party district councillor Alan Chan, who did not attend the demonstration, sent a letter of enquiry to property manager Guardian last week. Guardian replied, explaining that it stopped maintaining the gardens in order to avoid water leakage. 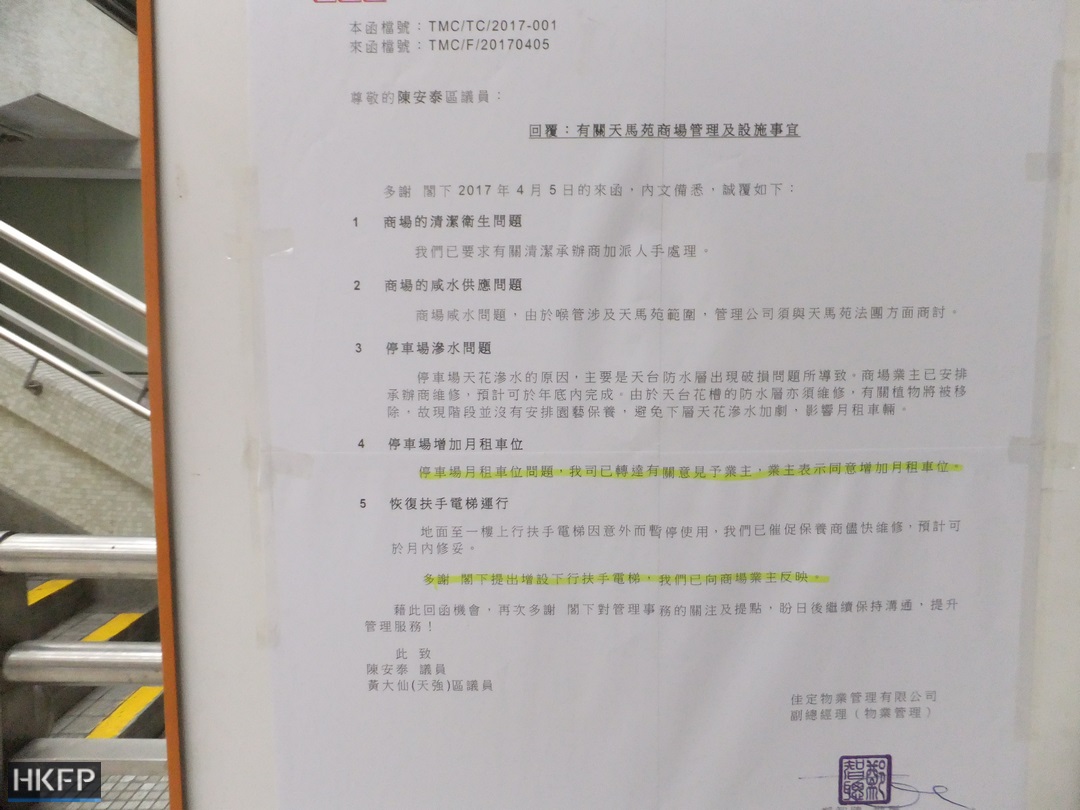 The company added that it would speak with its contractors as well as property owner Vantage to address problems related to car parking, broken escalators and poor hygiene.

The residents’ campaigning also appears to have led to some action – though not all welcome it. 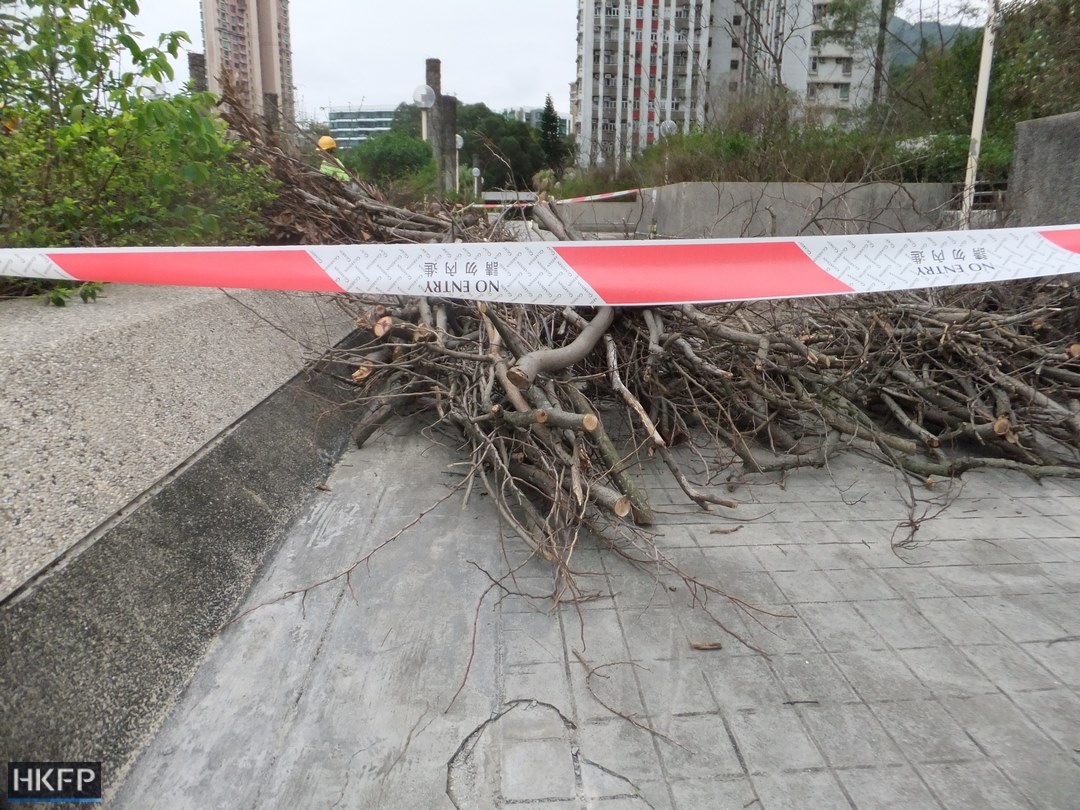 “These trees were beautiful,” said one resident who declined to be named. She believed that the property manager was reacting to Sunday’s events, which received coverage in many local news outlets. 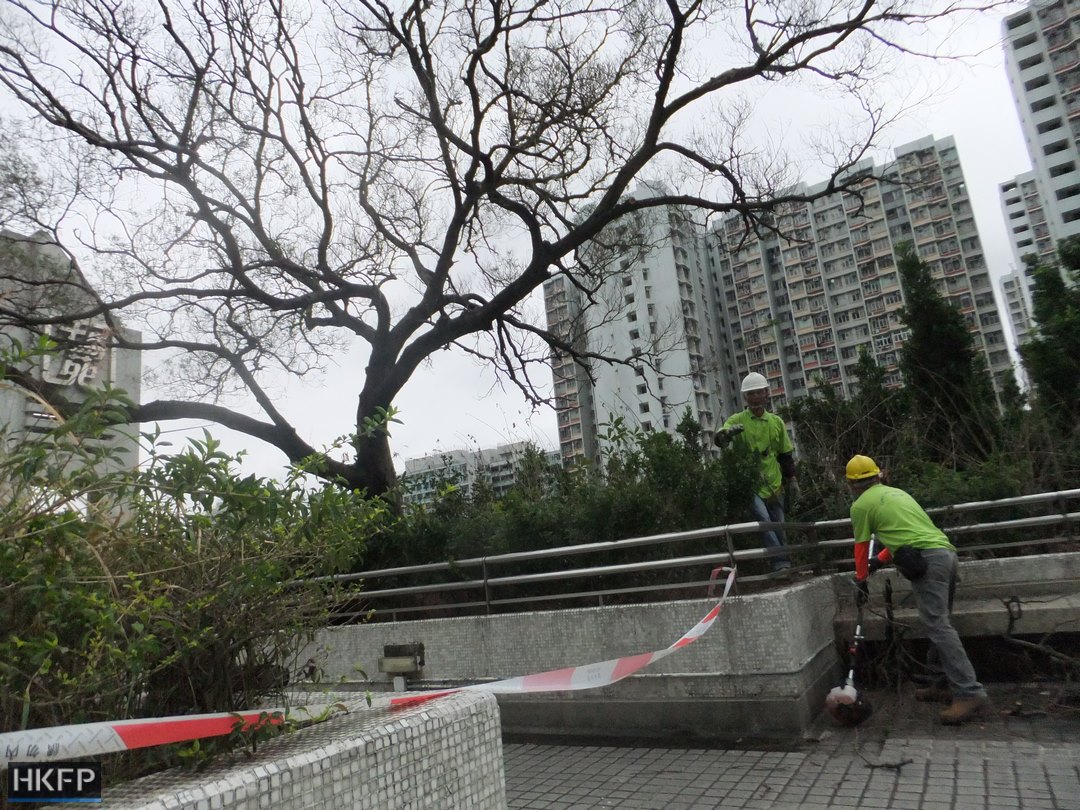 “They don’t want [the estate] to look so ugly so people come and take photographs of it.”

When the Hong Kong Housing Authority created the privately-owned Link REIT in 2004, it handed the company control of some 151 retail properties or local shopping malls – including Tin Ma Court – in preparation for its initial public offering.

Yet between mid-2014 and the end of 2016, Apple Daily reported that Link REIT sold off up to 28 mostly small-sized shopping malls – often at large premiums. The company has instead redirected investment towards larger-scale commercial projects – such as a HK$4.5 billion plaza in Guangzhou’s Liwan district, announced on Monday. 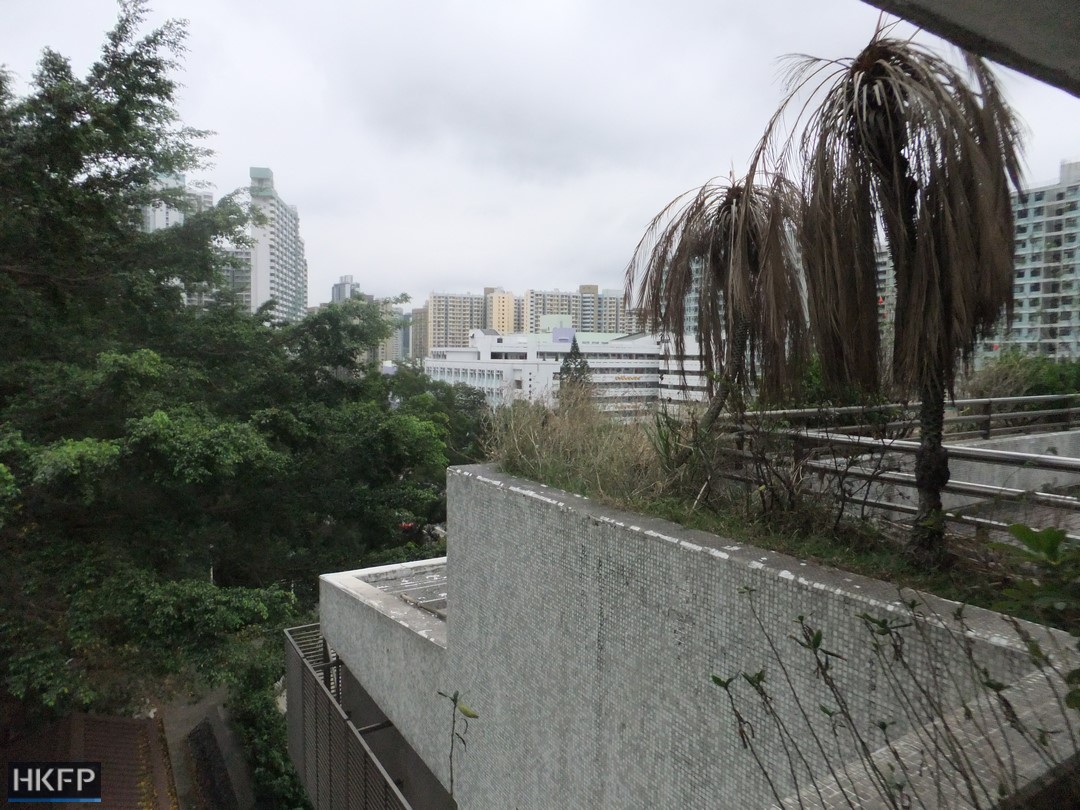 Many new mall owners have been accused by politicians and the local media of hiking rents, forcing out small businesses.

Last year, lawmaker Eddie Chu toured various small shopping malls, calling on either Link REIT, the Hong Kong government, or even a consortium of wealthier residents to buy them back. 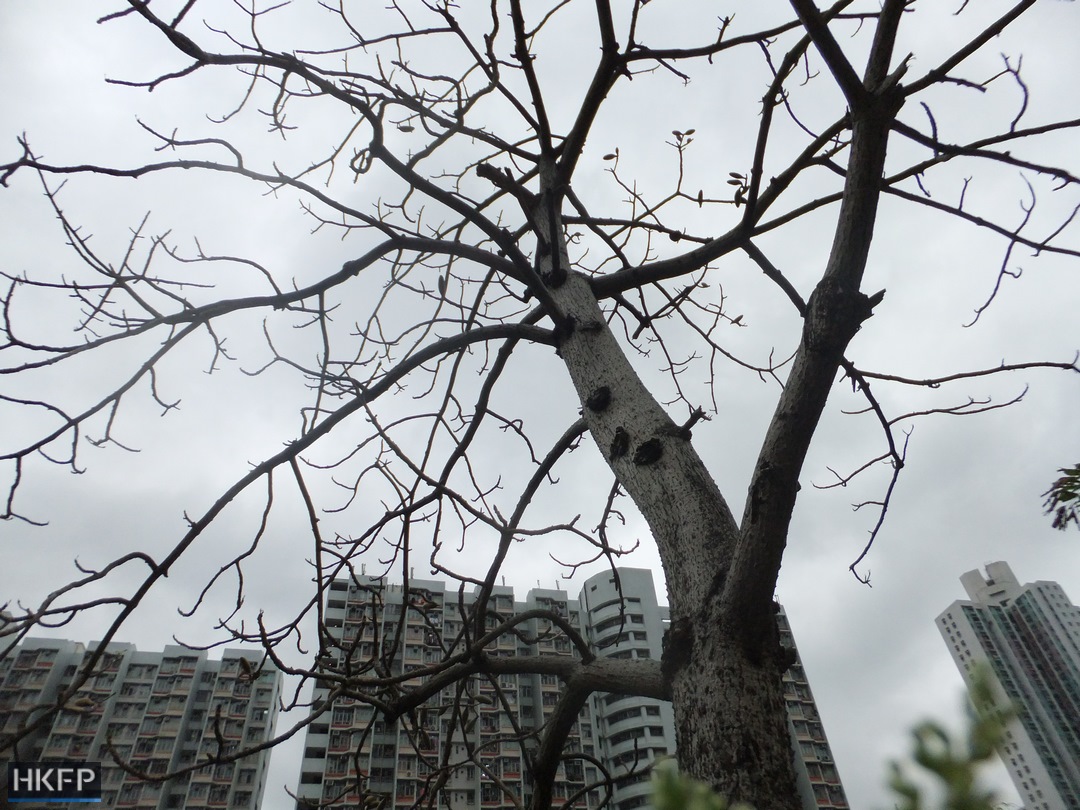 Back at the pharmacy, Cheung said that she had no choice but to close down her store at the end of May.

“This place is cheaper than supermarkets,” she told HKFP. “The residents told me that they would miss this place a lot, but that’s no longer my decision to make.”

HKFP contacted Vantage and Guardian for comment, but did not receive a reply.