Hong Kong’s panhandlers and buskers may be seeing more competition from foreigners.

This week, international news outlets reported on the rise of “beg-packers” across Southeast Asia. The trend in which travellers fund their trips by playing music, selling small items or begging for cash from locals has caused outrage among critics. Some have called the phenomenon “shameless” and an “orientalist fantasy.”

Photos of backpackers asking for money have spread across social media networks in recent months and Hong Kong has not been immune.

On Friday, a western couple were spotted in Prince Edward apparently fundraising for a plane ticket.

YouTube personality Aly Bongo told HKFP that the pair declined to speak to her but were holding a sign saying “need money to fly home.”

“What annoys me more about this is that they were just stood there. Not even trying to busk… Prince Edward is one of the poorest areas in Hong Kong where people LITERALLY live in cages,” she said on Facebook.

Commenters were similarly unimpressed, though one said: “Black white yellow brown, can a color actually tell you what kind of human he/she is?”

Earlier this year, HKFP reader Simon Abbott saw a local give HK$100 to a backpacker inside Jordan MTR station. The woman was holding a sign asking for money for a plane ticket home.

Others have been spotted busking on the streets on Central.

Last year, blogger Rama Kulkarni shared a photo of a traveller begging for money in Wanchai.

“[I]f you’re going to come here to fulfil your Orientalist fantasies, or to ‘discover’ Asian cultures, at least do it on your own dime,” Kulkarni wrote. 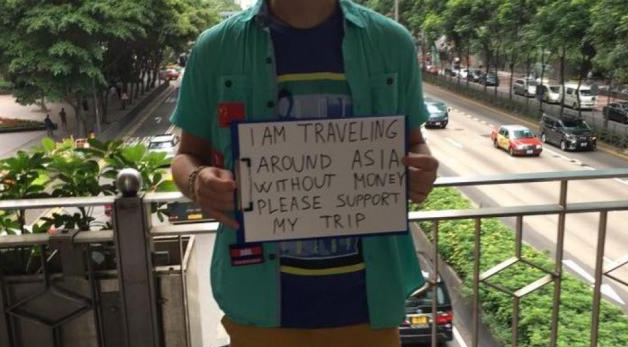 Last February, lawmaker Wong Ting-kwong raised concerns over the “increasing number of people who are physically handicapped, old or dressed as monks [who] beg or appeal for money on the streets”. Many of them were suspected to be from mainland China.

The security secretary said that 411 beggars from mainland China had been arrested between 2011 and 2016, and 306 had been prosecuted.

Persons convicted of begging in Hong Kong may face up to three months imprisonment and a fine of up to HK$1,000.