A building maintenance information database compiled by FactWire suggests signs of bid-rigging in the industry.

Participants in the maintenance market deviates from normal commercial operations when they submit tenders, according to a bid-rigging expert and researcher who participated in the data analysis. 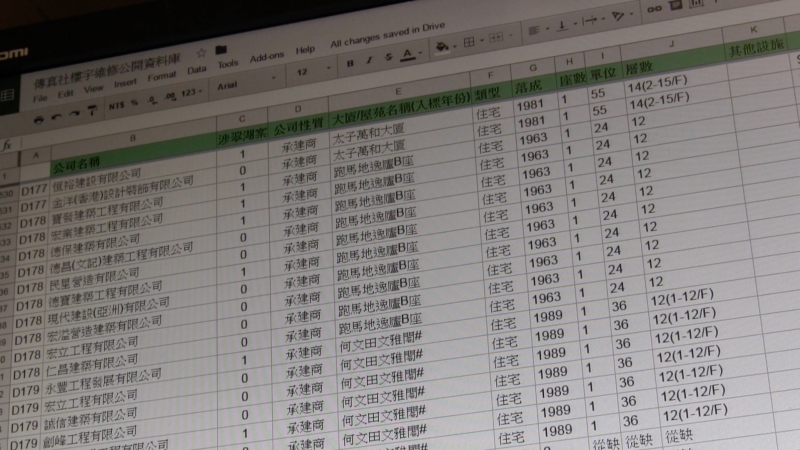 The analysis also reveals problems such as the provision of low consultant fees and the monopoly status enjoyed by a few companies.

FactWire has been openly collecting and compiling information of building maintenance since June last year, and has obtained information concerning 223 estates or buildings from the Property Owners’ Anti Bid-Rigging Alliance, consulting firms, owners’ corporations and the public.

According to the database analysis, 107 out of 113 projects with valid tender information have already chosen their consultants. Yet among 154 consultants which submitted tenders, only 48 won bids. Among them, 85 maintenance projects were secured by 25 consultants, which means that around 15 per cent of consulting firms took up almost 80 per cent of the construction projects (as per table 1 and 2 below). 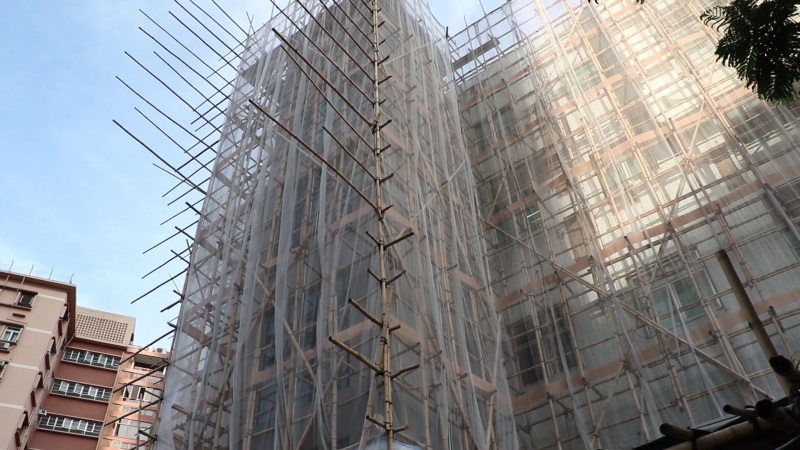 Consultancy fees in general were lower than the market price, some costing HK$8,000 between 2005 to 2010, and some costing below 0.1 per cent of the total maintenance fee. The fee, did, however, rise sharply between 2010 and 2016 – commonly costing between tens of thousand to hundreds of thousand dollars.

Professionals from the construction sector stated that, generally, it takes 1.5 years to carry out building maintenance projects, so if the consultant fee is too low, the salary of construction professionals may even be lower than the statutory minimum wage.

He said consultant fees were usually ten per cent of the project fees, yet around ten years ago it started to drop to only five to eight percent. It will be hard to cover the cost if the fees are below this percentage, and as a result, consultants may ask for commission from contractors. This would affect the role of consultants as watchdogs of the construction process and would cause standards to be relaxed. The burden of expenses to provide commission may be shifted to flat owners. 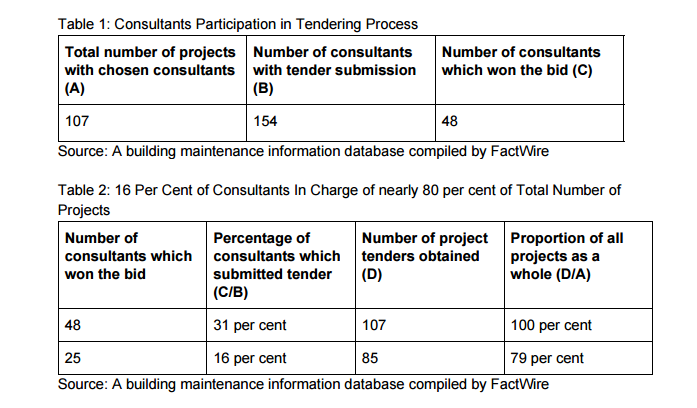 A similar situation applies for contractors: Among tender information of 195 projects submitted by valid contractors, 157 of them were projects with chosen contractors. Among 205 companies which submitted tenders, only 76 of them won the bid. 18 contractors took charge of half of all the maintenance projects, with five of them securing a quarter of the projects (see table 3 to 4). 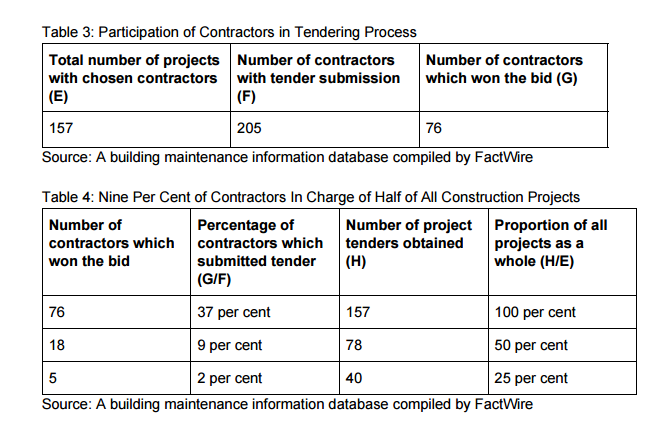 To learn more about the building maintenance market operations, FactWire did a case analysis on the Garden Vista maintenance project, the notorious bid-rigging case that resulted in a conviction.

Tommy Leung Tin-cheuk, Assistant Professor in the Department of Economics at Wake Forest University and researcher of anti-competitive behaviour, was invited to provide a methodology for analysis.

For the Garden Vista project approved in 2013, contractor Hong Dau Construction Company Limited submitted the third lowest tender price of HK$263 million among all 19 contractors. The other 18 tender prices ranged from HK$249 to HK$396 million. An earlier FactWire report revealed that the reasonable cost, according to a Government price list as well as the tender content and project approved by the owners’ corporation, should have been closer to HK$109 million with 15 per cent reasonable profit included. He said: ‘There is a saying: you can’t be too obvious in cheating but have to instead pretend you are competing. Bid-riggers usually coordinate which company to help win the bid before the tender process.’

Bid-rigging was not easy to spot, Leung said, but it was possible to see traces of it with enough data and by comparing the cost calculations of two contractors. While the ranking of tender prices among contractors should be more or less the same for estates of similar scale and category, contractors could disrupt the patterns and set up prices according to a prearranged plan.

‘For example, four contractors involved in bid-rigging could take turns to win the bid. There are no correlations between this pattern and the cost price. Therefore, by looking out for correlations between tender prices and costings, one can distinguish between markets with competition or bid-rigging. The higher the cost, the cost for maintenance of facilities such as swimming pools, clubhouses or external walls will naturally be higher. If bid-rigging is involved, such correlations would not be apparent.’ In addition, an analysis of two estates, namely Man Lai Court in Tai Wai and Eightland Gardens in New Territories East, also illustrate an irregular pattern in tender pricing among contractors. The two estates shared similar maintenance plans as well as project scale, with 640 and 527 households in four blocks respectively. There were 18 contractors which submitted tenders for the project passed for Man Lai Court in 2010, and 9 submitted tenders for the project passed for Eightland Gardens in 2014. 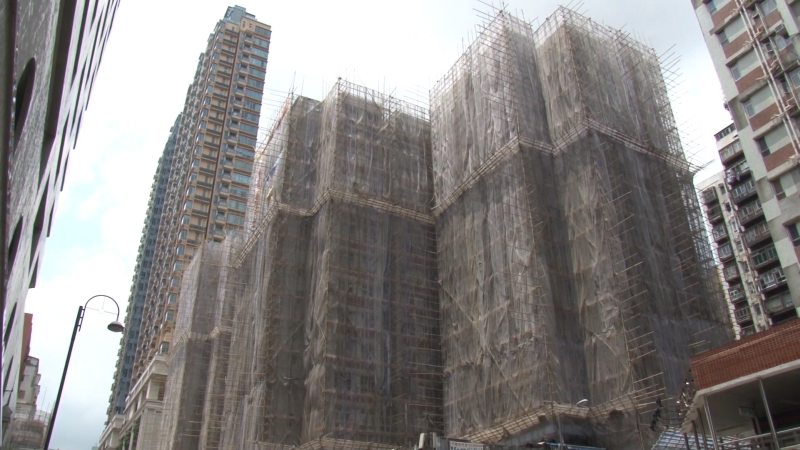 Using the same method to compare the tender submission records of the 195 maintenance projects, FactWire found that almost all tender prices lacked consistency or unanimity so it was hard to determine which contractor had a higher or lower operation cost. This violates the normal commercial competition practices

Leung said the analysis excluded deducible considerations affecting the cost, such as the district, number of blocks and construction projects. It would be suspicious if there were strong correlations between the remaining inexplicable factors, such as submitting a high tender price together, and it may imply that there have been discussions under the table between both parties, he said.

Leung said the high demand for maintenance works exacerbated the problems, as did a lack of knowledge or information on the part of owners.

‘First, demand is huge. Many old buildings need repairing in these ten years. Second, the government implemented mandatory inspection schemes, putting pressure on owners to get their buildings checked within a short time frame of one or two years, so owners were forced to accept higher tender prices. At the same time, it is harder for potential suppliers to enter the market, so choice is more limited.’

‘A lot of owners do not know the market price, for instance, the cost for fixing an exterior wall, so it takes a lot of time nowadays to find a contractor providing a fair and reasonable charge for maintenance,’ he said.

Lawmaker Lam Cheuk-ting, of the Property Owners’ Anti Bid-Rigging Alliance, was not surprised by the results. He pointed out that the building maintenance industry in Hong Kong was a narrow one, although there appeared to be a lot of construction companies in the market, creating an illusion of competition, they were in fact controlled by three to four big corporations. Bid-rigging groups calculate the tender price based on the owners’ capacity to pay, rather what the actual job would cost, Lam said. If they thought that a household could afford a HK$300,000 maintenance fee, the total fee for 1,000 households would be HK$300 million, and the contractor would deduce how much each maintenance item would then cost.

Lam said: ‘While HK$300 million sounds like a lot, they would look for different contractors submitting 20 tenders with prices ranging from HK$300 million to HK$500 million. So when owners saw the tender prices, they would naturally choose a cheaper one. They would not know that the cheapest price had been exaggerated one to two times.’