Like a tropical storm, gentrification has made landfall in George Town, Malaysia, washing away many old businesses and long-time residents – people like the Tin Man, or the recycling lady, Mrs. Lien, and the elegant Mr. Ong, who ran a chemical retail shop in Chulia Street for 63 years.

Of course, there is a flip side. Now there is room in George Town for a new generation to put down roots. People like Elyas, the barber who brought the scumbag cut back to life. 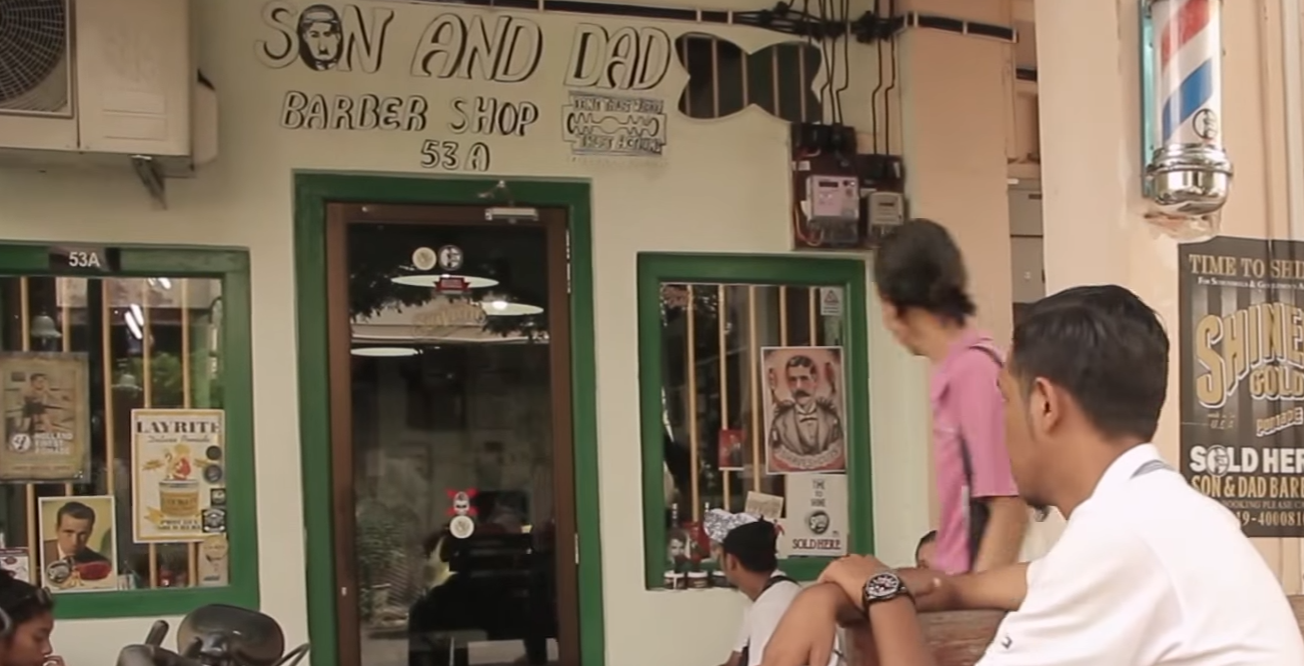 Elyas Bin Yunoos is slight of build, has a fuzzy wanna-be moustache, and big, dark eyes. Although he parts his hair on the side, Elyas prefers to wear a hat and white jacket when he cuts other people’s hair.

Elyas is most probably the best barber in the world, but painfully slow. Maybe that’s because he never went to a barbering school, where the instructor would have taught him to snip and flip his customers as fast as possible to maximize profits.

“Our concept here is vintage haircuts, which is why we have these old barber chairs in here,” says Elyas. A few years ago he was watching YouTube, when he stumbled upon a video by two famous barbers. “They’re the Schorem barbers from the Netherlands.” These hipsters barbers from YouTube combined haircuts, with tattoos, and a little bit of marketing-savvy to help rekindle a global interest in classic men’s cuts like the scumbag, undercut, or executive contour. “I watched them on YouTube. I studied their techniques. Then I felt like I had found myself. Yeah – I found the real me.” Elyas’s shop is located in a narrow shophouse next to the old Aceh mosque. He’s training two apprentice barbers, his friends Faizal and Fazil. Most customers have to wait their turn outside on the porch. Inside, air-conditioning cools razor-scraped heads under neon lit lime-green walls.

There’re posters of different mens’ classic cuts, a picture of James Dean, cut out of a Malaysian magazine from the 1950’s, and several prints of Eylas posing with his krew. When he’s cutting, Elyas’s face is focused. “We only do cut and shave, and we can use our clippers to cut as close as a razor.”

Elyas’s named his barbershop, Son & Dad, in honor of his father who also cut hair. His family and faith are central parts of his life. “Everyday after prayers, I call on Allah for his blessing. Thanks be to Allah. My confidence has grown as I’ve become more popular.”

In many ways, Elyas and his old-school, modern-times barbershop are just an extension of the traditional in George Town. Elyas doesn’t smoke. No tattoos. His wife is in the back with his newborn. He cuts all kinds of hair, be it Chinese, Indian, Malay, or European. But he does have a Facebook page, his shop is air-conditioned, and he learned to cut the scumbag thanks to that global phenomenon known as YouTube.

Like gentrification, a bad haircut is painful to look at, but it will grow out again. Just sit down and put your trust in Elyas – barber, family man, and a true George Town gentleman.

Video: George Town's gentleman barber is a cut above the rest