The number of members of the Hong Kong Internet Registration Corporation Limited (HKIRC) rose by almost one-third just a week before the cutoff of the registration period to become an eligible member to vote in the election of its board of directors. Many of the new members are linked to one Hong Kong businessman, FactWire can reveal​.

Emails, IP addresses and bank slips highlight the apparent involvement of Duncan Chiu Tat-kun, the president of the Hong Kong Information Technology Joint Council (HKITJC). Chiu participated in but lost in the election of the board of directors in 2015.

HKIRC, a non-profit-making, non-statutory corporation established in 2002, was designed by the government to minister the registration of Internet domain names under ‘.hk’. The corporation is organizing an election for its board of directors on May 18, with two out of eight positions vacant. Information security specialist Young Wo Sang, who was an non-appointed director from 2008 to 2016, said HKIRC directors had the authority to design and amend policies including the right to approve or reject the registration of domain names.

‘If a domain name is regarded as containing sensitive wordings, will its registration be rejected? The directors under the current system have the authority to do this,’ he said. The number of HKIRC members rose from 3,604 to 4,648, a 29 per cent increase, a week before the deadline on March 6 to register as a member and thereby become eligible to vote.

These 1,044 newly registered members represent 22.46 per cent of the total number of members (See Table 1).

Among the newly added members, the registration details of at least 412 members have abnormal patterns in common. Details including the registrant emails, IP addresses and bank-in slips point to the involvement of Chiu.

FactWire reporters tracked the actual IP addresses of these members and found that at least 73 new members had used the same IP address during registration. The IP address is the same as that of three companies with Chiu as the director or shareholder: Homebase Entertainment Company Limited, Starmax (H.K.) Limited and Xrace Limited (See Table 2).

The same IP address was used for the registrations of all three companies to become Supply Class members on March 3 and 4 this year. An internet service provider who wished to remain anonymous confirmed with FactWire that the IP address related to Chiu belongs to a HKBN broadband network cable under registration for private use, showing that the geo-location of the IP address came from the same location in reality.

FactWire reporters checked the nomination records of the election of board of directors in the past five years and found that So Mei Ching, the member who nominated Chiu to run for director in 2015, also has the same IP address.

FactWire reporters acquired 47 bank-in slips with dates ranging from February 27 to March 1 and discovered that some new members handed in domain name register fees to domain registrars within the same three days in the same HSBC Aberdeen Branch. The bank-in slips included domain names and emails which also employed the above abnormal patterns. On February 27, 13 bank-in ships were handled at the same counter in an HSBC Aberdeen Branch between 3:13pm to 3:17pm, with at least eight domain names sharing the same IP address as the companies related to Chiu. 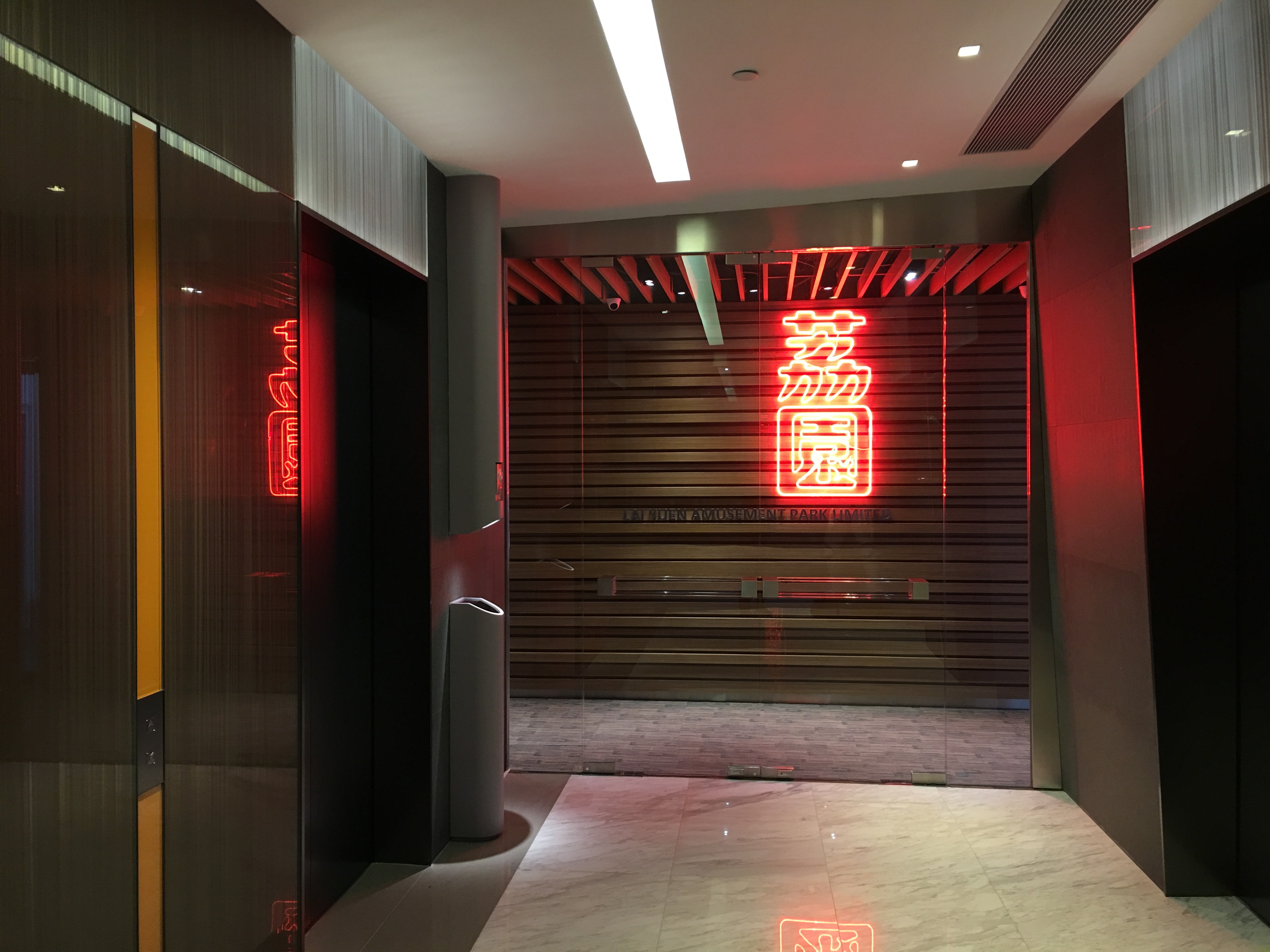 The exterior of the office of Lai Yuen Amusement Park Limited on the 23rd floor of Global Trade Square in Wong Chuk Han. Photo: Factiwre.

In addition, FactWire reporters found out that a total of seven companies related to Chiu share another IP address in the Supply Class membership registration (see Table 3). Chiu is either director, shareholder or both in six out of seven companies, including Lai Yuen and Far East Capital Management Company Limited. These companies used a combination of company initials and numbers to register for domain names to become HKIRC members. 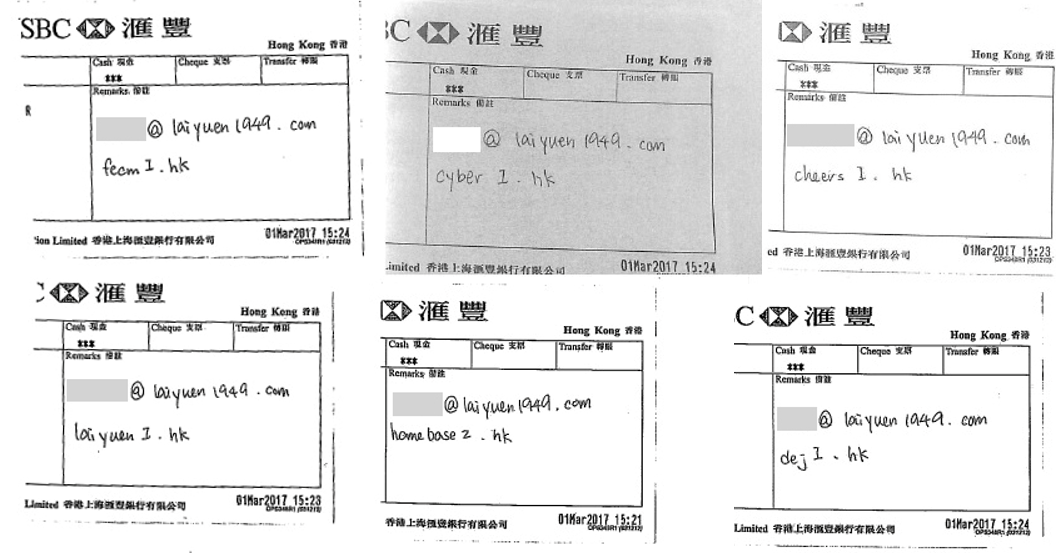 The anonymous internet service provider again confirmed with FactWire that this IP address belongs to a PCCW Netvigator broadband network cable, showing that the actual addresses of the seven registrants came from the same geo-location.

For six out of seven companies, the registered address is the 23rd floor of Global Trade Square in Wong Chuk Hang, which is identical to the HKITJC Secretariat address, where Chiu is president. FactWire found that the whole floor was jointly occupied by two companies, namely Lai Yuen, where Chiu is the sole shareholder and director, and Radiant Venture Capital Limited where Chiu is the director. 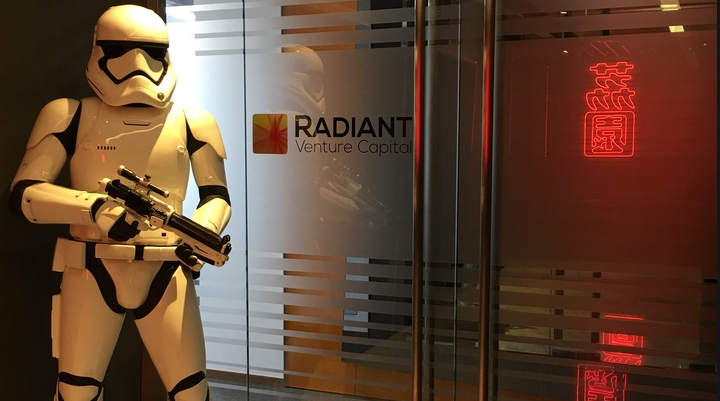 The exterior of the office of Radiant Venture Capital Limited on the 23rd floor of Global Trade Square in Wong Chuk Hang. Photo: Factwire.

Chiu is neither a shareholder nor a director at Sheen Classic. When FactWire visited the company registered address in San Po Kong, a staff member said: ‘This is Sheen Classic and Homebase Entertainment is also here.’ Information from the Companies Registry shows that Homebase Entertainment is also located on the 23rd floor of Global Trade Square in Wong Chuk Hang, and Chiu is its sole director. 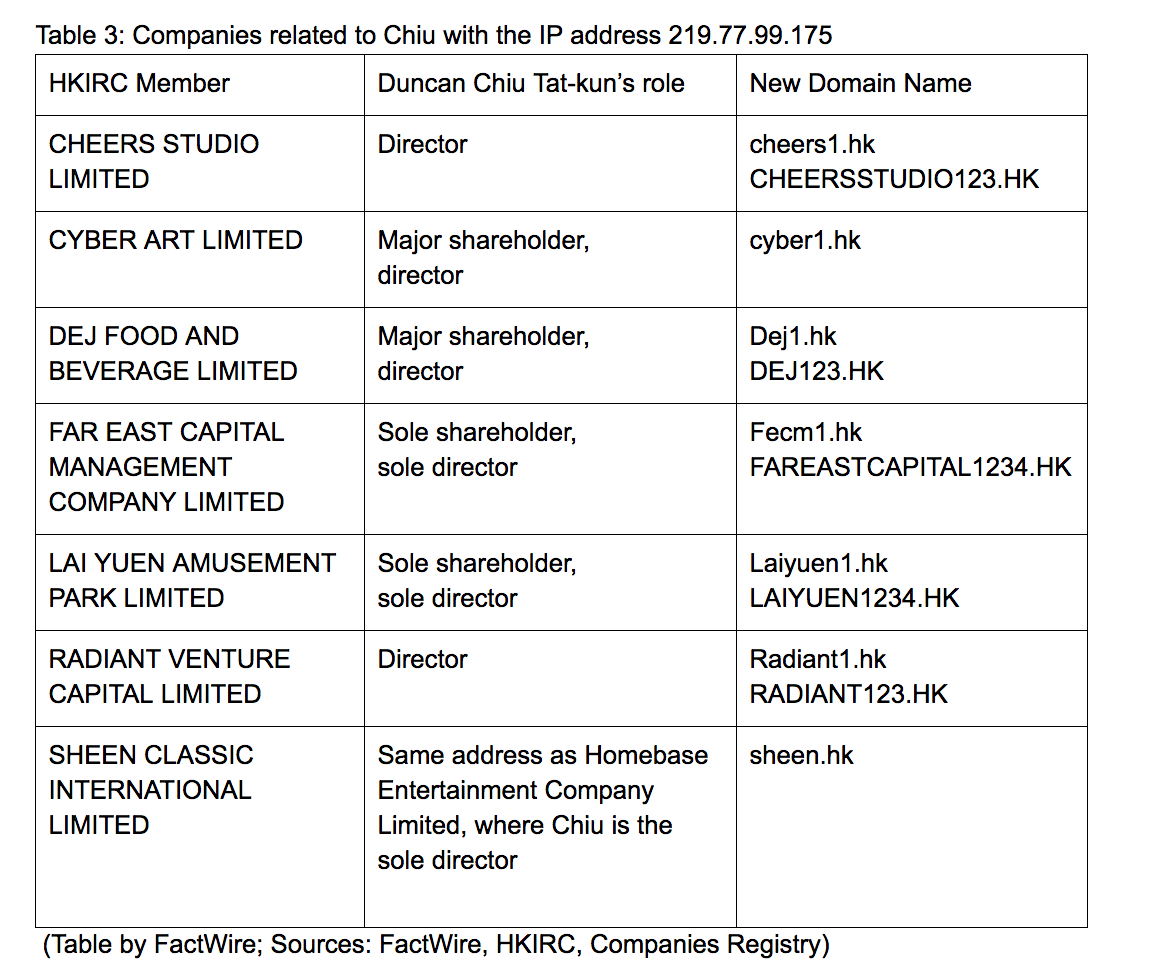 FactWire reporters went to the Lai Yuen office on Thursday in hopes of getting a response from Chiu, but the staff said Chiu is currently on an overseas business trip. FactWire then made a written enquiry to Chiu through his public relations staff, and tried contacting Chiu via phone and messaging applications to enquire whether Chiu would participate in the HKIRC election of board of directors in May, whether he knew about the increase in number of members within a short period of time, whether he is related to it, and how he would respond to media allegations that the increase in number might be a result of vote rigging. Chiu’s public relations manager stated that Chiu could not be contacted before the deadline, and FactWire reporters tried calling him on his mobile phone several times but there were no answers. No messages were received from Chiu so far through the application Whatsapp, even though it shows that Chiu had read the message from FactWire. No responses were received from Chiu in person so far.

The HKIRC board of directors comprises eight members, four appointed by the government and four elected by members. Two members from the Demand and Supply Class respectively fill up the seats of non-appointed directors. According to the HKIRC website, ‘the membership of the Company may be divided into such classes as the Directors may from time to time determine’.

The HKIRC memorandum available online states that an election will be held during the annual general meeting (AGM) each year. The ‘Non-Appointed Directors to retire in every year shall be those who have been longest in office’ since their last election. Two directors, Erwin Steve Huang from the Demand Class and Eric Fan Kin Man from the Supply Class, will retire this year.

Members of the Demand and Supply Class can nominate candidates to stand for the election from March 16 until April 6 this year. No nominations have been received so far. The meeting will be held on May 18.

According to reports of the AGMs, there has been some competition but the actual number of votes cast has been low. In 2016, two members competed to become a director for Supply Class. Lento Yip Yuk Fai was elected with 47 votes, while William Wong Kam Fai secured 23 votes. The total number of valid votes was 70.

Three members competed to be a Demand Class director in 2015. Wong Ka Ping was elected with 104 votes, while Andrew Wong and Duncan Chiu Tak-kun acquired 22 and 85 votes respectively. The total number of valid votes was 211. In 2014, Erwin Steve Huang was elected as a Demand Class director with 28 votes, while Wong Pin Dar got 19 votes. The total number of valid votes was 47. According to the HKIRC 2015/2016 annual report, the corporation has a retained profit of more than HK$100 million.