When on March 1 Chinese media launched a sudden and all-out smear campaign claiming that the torture of human rights lawyer Xie Yang (谢阳) was a fabrication, and that Western media coverage of it was “fake news,” many of us wondered what this outburst was all about. A UN Human Rights Council meeting? The German Chancellor’s planned visit?

Now we know. On February 27, diplomatic missions in Beijing from 11 countries wrote a letter, expressing their “growing concern over recent claims of torture and other cruel, inhuman or degrading treatment or punishment in cases concerning detained human rights lawyers and other human rights defenders.” The letter also urged China to abandon the practice of secret detention known as “residential surveillance at a designated location” (RSDL).

Looking back, one has to marvel at China’s response.

On March 1, two days after the 11-country letter was delivered, the smear campaign began. Global Times (《环球时报》) led the charge with the article “The Truth about ‘Xie Yang Torture’: It’s a Fabrication Catering to Western Media”. It was quickly reposted by other print media and on major news portals such as Sina, Tencent, Netease, China National Radio, China.com, etc.

Lawyer Jiang Tianyong, who was disappeared on November 21 last year and subsequently placed under RSDL, was shown on camera “admitting” that he was involved in the fabrication of Xie Yang’s claim to have been tortured, and that Xie Yang’s defense lawyer (Chen Jiangang) supplied further embellishments. A photo of Xie Yang in the Global Times. Photo: Screenshot.

On March 2, CCTV broadcast (on at least two channels) a segment titled “The investigation into the truth about Xie Yang’s torture – a concoction of storytelling and imagination”. A prosecutor from the Hunan Procuratorate claimed that a team of prosecutors conducted an investigation in mid-February and concluded that the torture allegations were not true. CCTV failed to show a single full page from the “report,” except for what appeared to be the final page signed by three names.

Also on March 2, the Weibo account of the Communist Party Youth League posted a 4-minute video called “The Truth About Xie Yang Torture Hyped up by Overseas Anti-China Media” (China Change subtitled the video). In addition to repeating the same smears, it made cynical deployment of several one-liners from President Donald Trump to add a veneer of legitimacy to the attack. First off, Jiang Tianyong’s two defence lawyers were shocked to see their client on national television. They promptly asked: We have been denied meeting with our client for months on grounds of national security — how could a CCTV reporter, a camera crew, and God knows who else trudge in and film him? They demanded an answer but have received none.

In mid-February, the Beijing Municipal Justice Bureau and the Chaoyang District Justice Bureau summoned the 38-year-old lawyer Chen Jiangang — one Xie Yang’s two defence lawyers and the author of the detailed torture transcripts published on January 19 — and berated him for disclosing case information and giving interviews to foreign media. He was told to keep his mouth shut.

Following the massive smear campaign on March 1 and 2, Chen Jiangang published a long article detailing his meetings with Xie Yang and how the transcripts came about, questioning the Hunan Procuratorate’s so-called “independent report.” On March 5, he sent a formal letter to Hunan prosecutors, but has heard nothing back to this day.

He also posted Xie Yang’s own statement on January 13 affirming the fact that he was tortured. Sensing that he too is in danger of being retaliated against, Chen posted a statement: “I take complete responsibility for every character in the two transcripts I made of the meetings with Xie Yang, as well as for any other transcripts that have not yet been made public.”

Meanwhile, he has received a flow of nonstop calls and messages from municipal and district justice bureaus. “You made big troubles for us,” he was told. “The Center is extremely furious.” The authorities, he learned, approached some of his former clients and attempted to get them to smear him – an indication that the retaliation campaign is well underway.

His law firm was “inspected” earlier last week and the principals were told that they needed to “tighten management.” It’s all about intimidation.

Since February 28 both defence lawyers have been unable to meet Xie Yang despite repeated requests.

“China is always opposed to the efforts of any country to disrupt the normal case handling by Chinese judicial authorities at the excuse of human rights,” Hua Chunying, a spokeswoman for China’s foreign ministry, said on March 21, responding to the February 27 letter by 11 countries.

“You mentioned this expression of opinions by 11 missions in China. I believe this in itself is violating the spirit of rule of law. All sovereign states enjoy the independence of judicial affairs, and no country has the right to interfere with the independence of their judicial affairs,” Ms. Hua said in response to a question from The Globe and Mail.

The letter seems to have really rattled China and ruffled feathers in Beijing.

For Washington Post, the news on March 22 was that the United States abstained from signing the letter, conspicuously and inexplicably. Some suggested the omission was due to the still-unfilled senior positions and the chaotic nature of the transition, while others believed it was a decision most likely made by Rex Tillerson, the new Secretary of State.

The Chinese government apparently relished the fact that the United States didn’t participate. Global Times took a screenshot of the Post’s headline, though in their Chinese-language summary only drew attention to the U.S. absence, while neglecting the part about “lawyers” and “torture.”

Global Times’ screencap of Washington Post’s headline and its caption in Chinese.

They also had a field day co-opting Trump with images and soundbites like “very fake news” and “you’re fired!”

Global Times criticised western governments for inflating the number of lawyers who were subject to persecution, pointing out that the “Hunan People’s Procuratorate has issued a formal investigation report over allegations of ‘Xie Yang being tortured,’” and concluding that they are not true. It warned Western governments not to misjudge the Chinese judiciary due to “political bias.”

Is there an ‘investigation’?

No, there isn’t. They know perfectly well that everything about Xie Yang’s reports of torture is true. The CCTV report on March 2 showed only half a page from the much vaunted Hunan Procuratorate investigation. Of the half page there is the title, the “Conclusion,” and in between nothing more than ellipses.

Lawyer Chen Jiangang lobbed a barrage of questions about this report, which I sample here:

China has to be seriously rattled to have launched such a furious and massive counterattack. It came right after the 11-country letter, but I suspect the letter was merely the last straw in a period of prolonged media coverage and governmental and NGO reaction to the torture revelations — not just of Xie Yang, but of Li Chunfu, and privately, of other 709 Incident detainees.

Indeed, we have yet to learn the whole extent of the 709 torture. In a letter to world leaders, four wives summarised what they had learned from talking to those who had been released and who have yet to speak out openly about their experiences in custody:

“Whether the internees were in good health or not, they were all made to take medication. ….The most they were forced to take was 20 pills per day, including barbiturates and antipsychotic drugs, along with other unidentified drugs. The victims were either forced to consume the drugs or tricked into doing so, and afterwards often felt dazed and stuporous.”

“….Prisoners were also put in cages submerged mostly in water, and left inside for seven days, the entire body underwater with a space to breath at the top. As they stood in the water and tried to sleep, rats would scurry about outside the cage, biting their nose and ears.”

Concurrent with the arbitrary detention and torture that began on July 9, 2015, China has been propagating a narrative where an evil force, led by the United States and its allies, is working to destabilise the world for its own gain: in Iraq, in Syria, over the South China Sea, and inside China. The establishment of THAAD in South Korea is also seen as a finger in China’s eye.

One of the many videos Chinese authorities have disseminated on domestic websites included stealthy shots of U.S. embassy vehicles and personnel, and a French diplomat, during the first four 709 trials last August in front of a Tianjin court. All this was fitted to nefarious music and a sarcastic, hectoring voice-over. Human rights lawyers and defenders are depicted as agents of China’s subversion in a U.S.-led colour revolution. 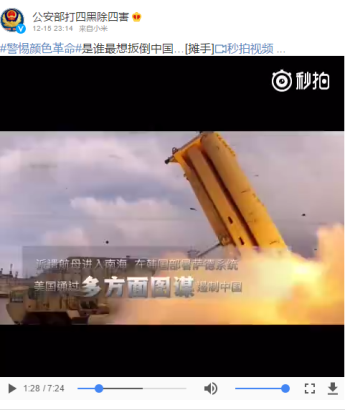 The revelations of the torture of Xie Yang were an extraordinary act of courage by both Xie Yang and his lawyer Chen Jiangang. The broader meaning of it was laid bare by the two lawyers during their long conversations at the No. 2 West Meeting Room at Changsha 2nd Detention Centre. Chen related in a home recording on March 7:

“But Xie Yang refused to admit any guilt because he is innocent….. His thought was that he wanted to maintain the final dignity for Chinese lawyers as a whole. He also thought that right now a nationwide crackdown and persecution of human rights lawyers — and any lawyer who dares to resist the authorities — is taking place, and that he would spare no effort to fight his case and push back against the persecution. If they succeeded easily in Xie Yang’s case, they would unscrupulously harm and persecute other lawyers in the future. He was willing to use himself to ‘test the tiger.’ I’m not saying how wonderful he is. I know him too well, he has many flaws. But on this point, he said he wanted to use his own case to fight back and to prevent them from persecuting lawyers as a whole in the future.” [26’03”-27’36”; subtitled by China Change]

You too, diplomats and policymakers, have to hold your ground and push back. You must not be beaten off or scared away, or you will be crushed and overrun.