It is common knowledge that China’s so-called Great Firewall bars Chinese netizens from accessing overseas websites. A chief side effect of the firewall that is less commonly known among foreigners are the many social media outlets that “smuggle” news from overseas to mainland China. One woman interviewed by The Initium works for a media outlet that runs official public accounts on Weibo and WeChat. Ms. Yu described her daily routine to the Initium: She uses circumvention tools to access Buzzfeed, Reddit, and Tumblr, and to search for news that mainland Chinese readers may find interesting. She copies the stories and re-writes them in Chinese, adds attractive headlines for local audiences, and then publishes the stories to the outlets’ official accounts.

Thanks to China’s pervasive censorship system, “information smuggling” has become a robust sector. According to Yu:

The news censorship system suppresses conventional media (from covering news), the Great Firewall has blocked overseas media. That’s how my job fills in.

Yu explains that she typically writes three stories for the media outlets every day, spending a few hours on each story. Within a few minutes, the newly published post can attract hundreds of “likes” and comments. Since most of the stories are funny pieces that have nothing to do with China, they are less likely to be censored.

Information smuggling practices like these are increasingly common in countries with robust technical censorship infrastructure. In Iran, a non-profit project called Toosheh (“bundle”, in Persian) allows thousands of tech-savvy consumers download packaged files of censored news and media by way of a TV satellite connection. In Cuba, information that is either censored or hard to access (due to slow connection speeds) regularly circulates on thumb drives. Yu has even compared her work to Cuba’s Paquete Semanal or “Weekly Package”, a collection of media that is sold each week on Cuba’s informal market:

What I am doing is exactly the same [as the weekly package] — I ride on the Wall and pick the fruits from outside the Wall. The only distinction maybe, I have to blend the fruit into juice according to my fellow’s taste. People nowadays are too busy.

One of the most popular social media public accounts that “smuggles” overseas content is called “British News Sister” or @uktimes （＠英國報姐). Launched in late 2013, the news outlet publishes mainly entertainment and sensational stories from overseas. Even official media outlets like Global Times and People Daily’s social media accounts have republished their posts. By early 2017, @uktimes had 13.35 million followers on Weibo and 580 thousand subscribers on WeChat. Its average post garners more than 10 million views. 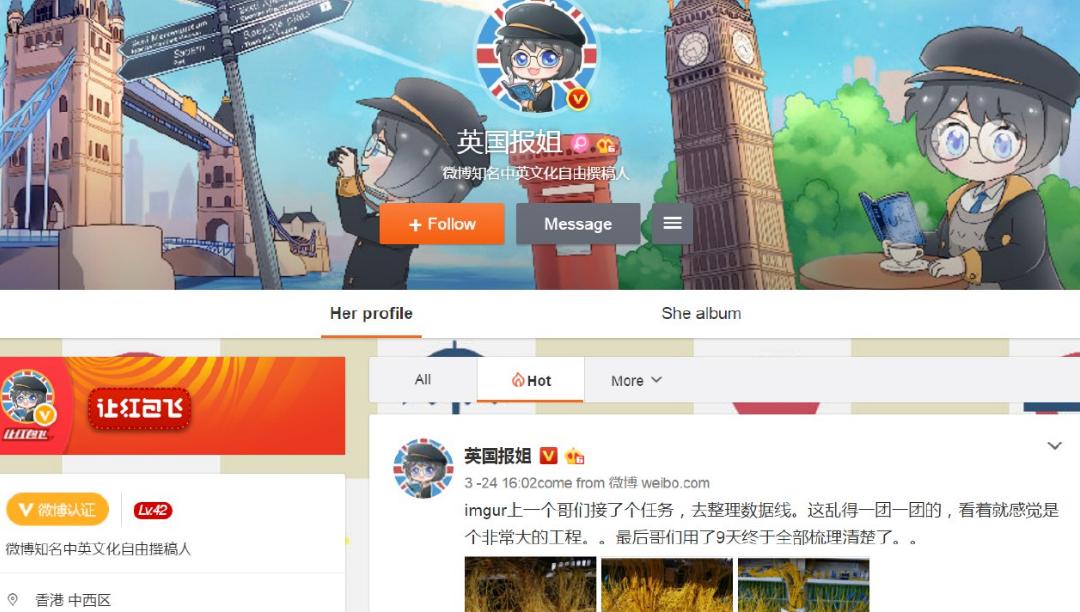 The person who runs @uktimes studied in both the UK and Hong Kong, where she pursued a PhD. She started the account in an effort to share information and experience about studying abroad, never anticipating that it would evolve into an influential social media outlet. She recently resigned from her teaching position at a mainland Chinese university to manage @uktimes.

Another popular outlet for overseas news content is “Northern America Chinese Student Daily” (@北美留學生日報). Unlike @uktimes, the WeChat account of Northern America Chinese Student Daily publishes mainstream political news and its readers are mostly mainland Chinese students studying in Canada and the US. Its headline story has a average 60 thousand views each day and it has become a major information source for overseas Chinese students.

The chief editor of Northern America Chinese Student Daily Lin Guoyu worked at an accounting firm in California after graduating from University of Miami in 2012. He quit his job in 2014 to build his career by running the WeChat public account.

Most of the editors working for news outlets which select and repackage overseas news and import them to Chinese readers do not have journalistic training. More often than not, they prioritize things like click rates over hard-hitting public interest journalism.

Anyone can do this job. You just need to know English. And that’s exactly how the media is run… Very rarely that a person would be asked to re-translate an article; the role of the editors is not to do fact checking but make it more attractive and reader friendly. If the original text is – a school student was “sexually assaulted”, the editor would change it to “raped”.

“Northern America Chinese Student Daily” has made similar mistakes. On 30 August 2016, the public account translated an article by University of Chicago president Robert Zimmer, originally titled “Free Speech is the Basis of a True Education” to “Amid escalating political correctness, the President of the University of Chicago stands up against restriction on free speech.”

Netizens soon after pointed out that the translation turned the original article into a sensational piece. Some expressed concern that the headline was altered in an effort to appeal to the anti-political correctness sentiments shared among overseas Chinese students.

Some information smugglers even translate patently false news in an effort to attract clicks. As a Chinese-American journalist observed, this came to light in Chinese social media “reports” published during the US presidential election:

During the US election, local quality contents or even fake news were massively imported by the social media public accounts. Fake news like “spirit cooking” and “Hillary Clinton assassination of government officials has been denied by fact checkers and most mainstream media did not even report on the smear. Yet in the Chinese world, many public accounts have placed these fake news on the headlines and left people an impression that “all these negative reports and stories about Hillary Clinton cannot be all fake.”

Despite the spread of fake news and distorted information, the information smuggling sector will continue to grow, thanks to the Great Firewall, the thirst for information outside the wall and capital investors who appear to see the flow of information as a profit-making endeavor rather than a public good.