Things That Can Happen is a decidedly alternative space, a descriptive that might be familiar to other parts of the world but which might need some explaining in Hong Kong.

Legally (or economically) classified as a public charity (or non-profit), this art exhibition gallery is not interested in selling art.

Another “alternative” component of the gallery is that Things That Can Happen is an artist-run space, founded by artist Lee Kit and arts professional Chantal Wong, and operated on a day-to-day basis by author Mary Lee. Its agenda is focused on the experience of art and the possibilities of experimentation managed through the sensibilities of the artist, rather than those of the arts administrator or bureaucrat. 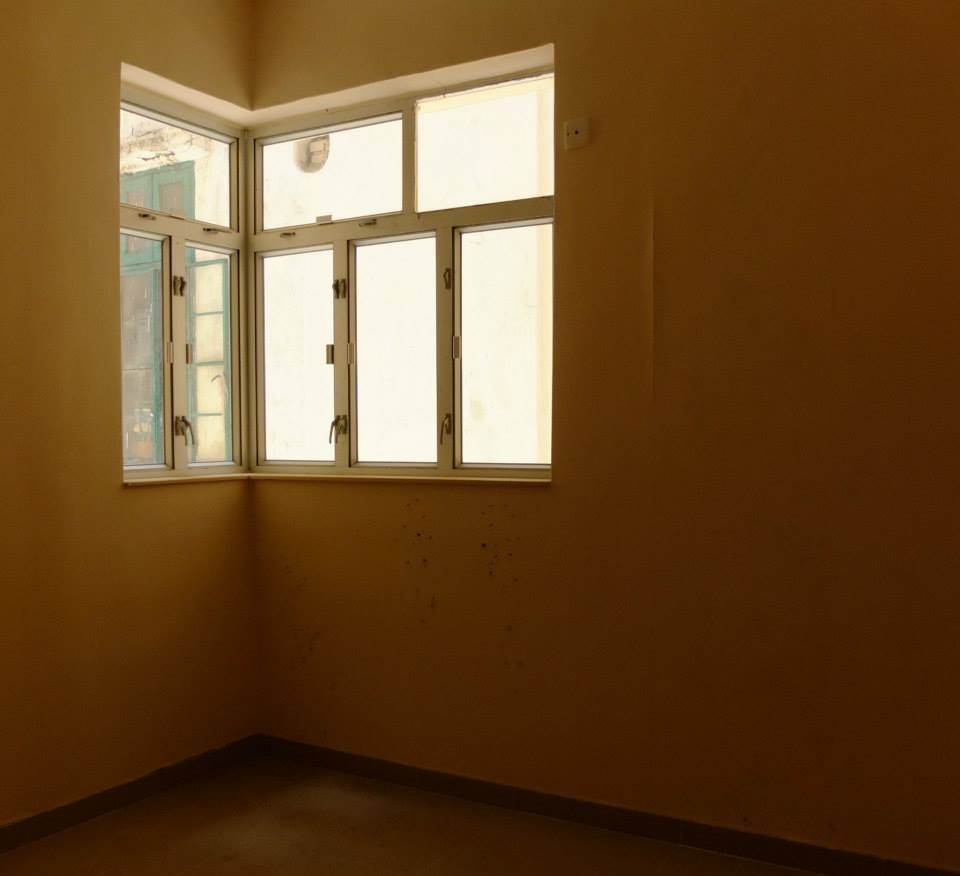 Hong Kong is a place where one is occasionally and indiscreetly, asked how much one earns, or how much rent one pays. Bargaining and financial negotiations are paramount values.

While admirable on the level of moving beyond mere survival to providing a better life for one’s progeny, this driving force is also what can drive the city crazy. And conversely, it’s what might seem crazy about running a “non-profit” enterprise.

The current exhibition at Things That Could Happen, “Tick -Tock” by Taiwanese artist Yang Chi-chuan, is so ephemeral and spacious within the limited confines of the gallery that visitors might wonder what they are supposed to see, in direct opposition to the flashy grandeur of Art Basel. Indeed, the installation encourages a slowing down of perception, something that should be appreciated in the over-stimulated atmosphere of Hong Kong.

Part of the installation takes note of the subtle traces left on the space by previously invited artists, the damage, so to speak. While providing a kind of oblique history of Things That Can Happen, it also evokes how every lived-in space bears an anonymous narrative of nicks, dents, peelings and stains, the ephemeral reminders of the now-absent resident.

Another part of the installation, one with a direct relation to the previously-noted slowing down, that which is named in the exhibition’s title “Tick-Tock”, is the sound of a clock ticking in one room and in another, the sound of one of the idiosyncratic audio markers of Hong Kong, the blipping noise emitted by a pedestrian crossing.

These almost spooky sonic markers make it clear that listening will be as important as seeing; otherwise, the space almost appears to be empty.

But suddenly a voice announces the exact time of the day, forcing me back into the “real” world, providing me with “useful” information while simultaneously making me hyper-aware of my surroundings.

Yang Chi-chuan’s installation has been built over a period of time and this is what an artist residency at Things That Can Happen affords.  The invited artist actually lives in the space (in a separate room) and has the time for site-specific interactions.

The central part of the installation, taking place in one small room in the front of the gallery, has a recording of the artist reading her own text (in Chinese) which is simultaneously translated into English through captions that are projected on the wall.

These are her recollections and impressions of Hong Kong as a visitor, a non-resident. The cadence of her voice, the calm and even manner of reading a story out loud, pausing before beginning the next anecdote, once again reinforces the slip in time of the entire installation. 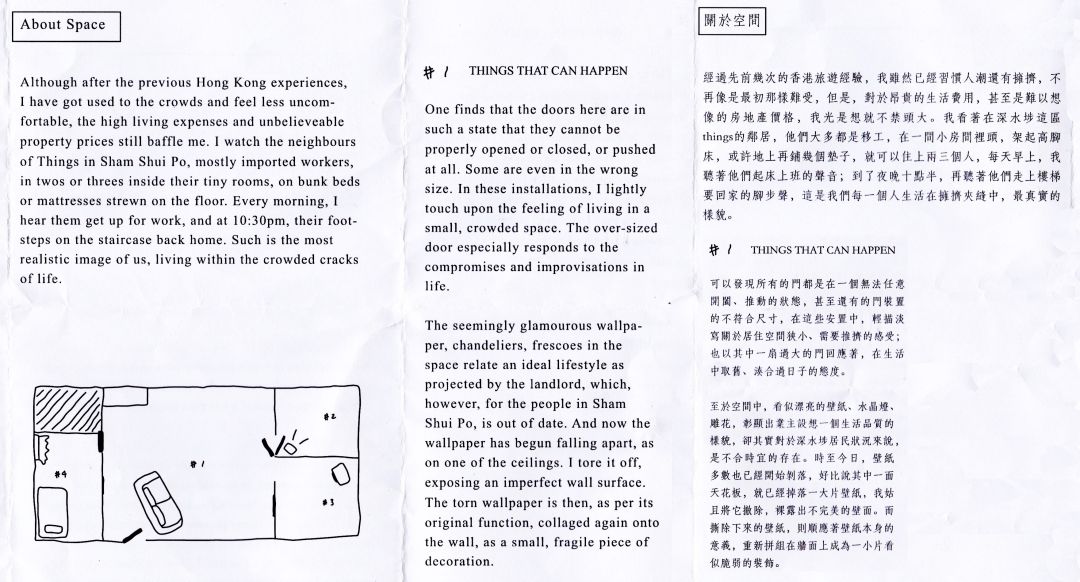 As I read the artist’s hand-out (and map, posted here in English and Chinese) I realised I may have not included every element in the work or indeed their exact intentions. What would seem important in this case is that the work provokes a variety of interpretations. Please decide for yourself…

The day to day operator of Things That Can Happen, Mary Lee, was kind enough to answer a few questions about the gallery:

Q: How did the name “Things That Can Happen” come about?

Mary Lee: Co-founder Chantal Wong came up with the English name. She was thinking about a space of possibilities, and that phrase just stuck with her, so finally in want of a better alternative, we used it. 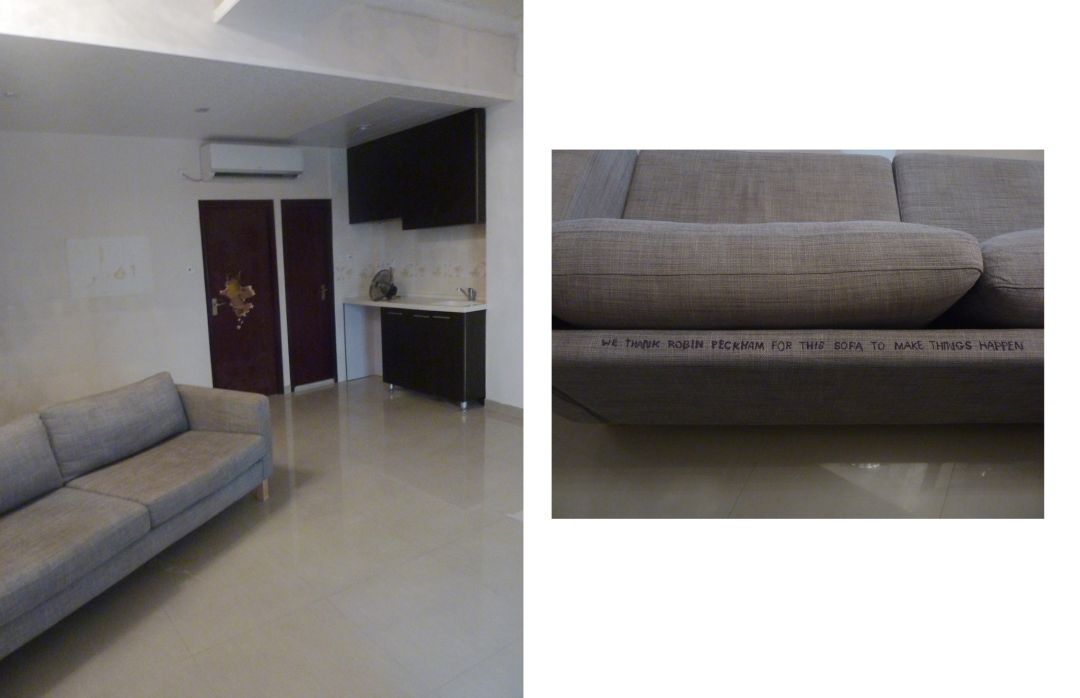 Q: Can you generally speak to the agenda or impetus for Things That Can Happen, why it came about and what the organisers wanted or expected to happen?

Mary Lee: Things That Can Happen was initially a response to the many thoughts and emotions that came about after the Umbrella Movement, along with the lack of experimental art spaces in Hong Kong, despite the burgeoning art market which has been accelerated by Art Basel Hong Kong.

As an artist-run space (besides Lee Kit, our team also includes other local young artists), the aim is first and foremost to create a space where artists can experiment without the pressure of the art market. Artists are not pressured to make “marketable works”.

We are also experimenting with a new model of running an art space, by mainly receiving funding and resources from individual supporters, as a way of channelling available resources and avoiding the bureaucracy of applying to a funding institution. We also thought that it would not make sense to apply for funding from HKADC as Things That Can Happen fundamentally concerns itself with institutional critiques.

One such critique or intervention I did with some friends was in response to the closing of the fabric market in Sham Shui Po, while Chantal (Wong) started a Community College where refugees in Hong Kong gathered every weekend at Things That Can Happen for English classes. 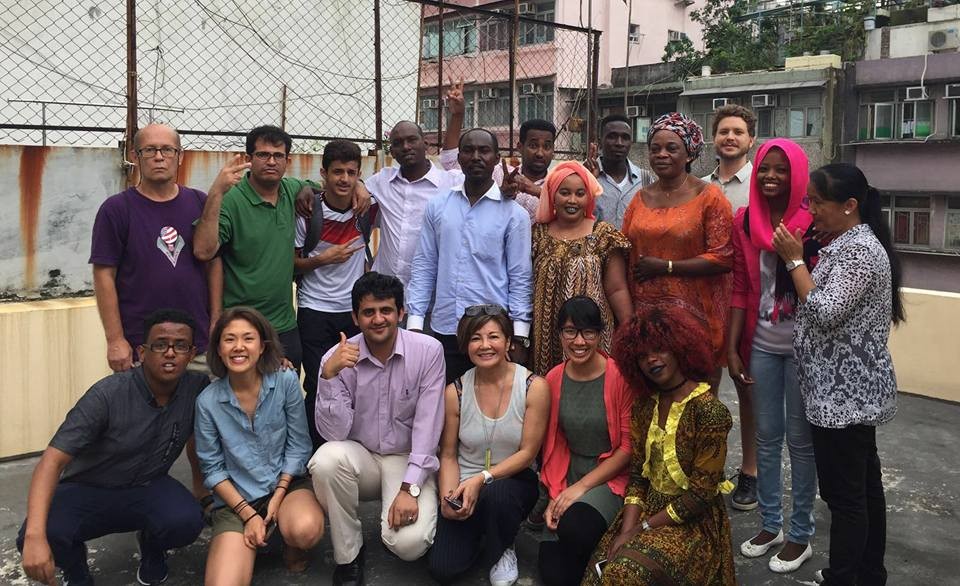 While there might not be a very clear agenda as to what we might achieve in two years’ time (the stated timeframe for the Thing That Can Happen project), we remain open to possibilities as the space evolves, keeping an eye on the needs of the scene and our own creative lives.

Mostly, the impetus for Things That Can Happen was about creating an alternative. Most forms of artistic expression and exhibition spaces fall into a recognisable model. The rest just came up as we went along – being removed from the usual art hubs such as Central and locating ourselves in the middle of Sham Shui Po, the most “grassroots” of all areas in Hong Kong.

Q: Who would you say your audience is and has this changed over time?

Mary Lee: In the beginning the local and international art world was very curious and excited about Lee Kit’s art space. I think it has remained more or less the same for a year and a half – most of the audience are informed about the arts.

People always ask if we get a lot of visits from the local community in Sham Shui Po. The answer is no. While we do not intentionally create barriers, there is already an existing cultural barrier that says art is for the intellectuals, especially as the language of contemporary art is often very difficult and intimidating for the general public. And being housed on the first floor of a tong lau where you have to press a door bell to gain entry, we are indeed very obscure. 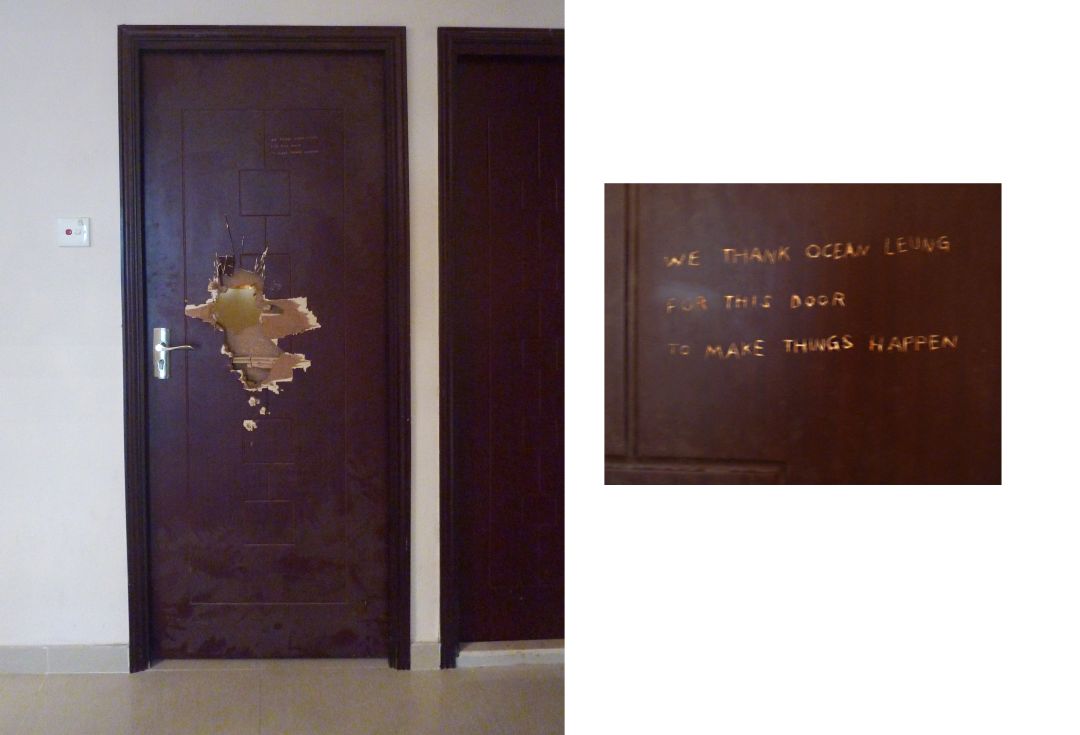 We do not presume that everyone needs our art, or that we must engage with our community being in a “grassroots” neighbourhood… somehow I have accepted the fact that some art forms only cater to a limited audience.

It is important for us to safeguard the kind of art that does not sell and that the majority of people might not appreciate, but we see this as important for the development of art, especially in an age when everyone talks about audience development, and the box office as the big criterion for funding.

Q: Could you perhaps mention, in your opinion some of the other stand-out residencies that have occurred at “Things That Can Happen”?

Mary Lee: Hong Kong artist Ocean Leung spent two months at Things from December 2015 to  February 2016, during which he used the space as his living quarters and studio.

At that time he was writing his MFA thesis and his shared studio in Fotan was too crowded so he could not work properly. We suggested giving him the space.

Ocean recorded his thoughts and explorations of the neighbourhood in the form of a dairy, and at the same time reflected on his emotional responses towards the Umbrella Movement, trying to reconcile the roles of activist and artist. 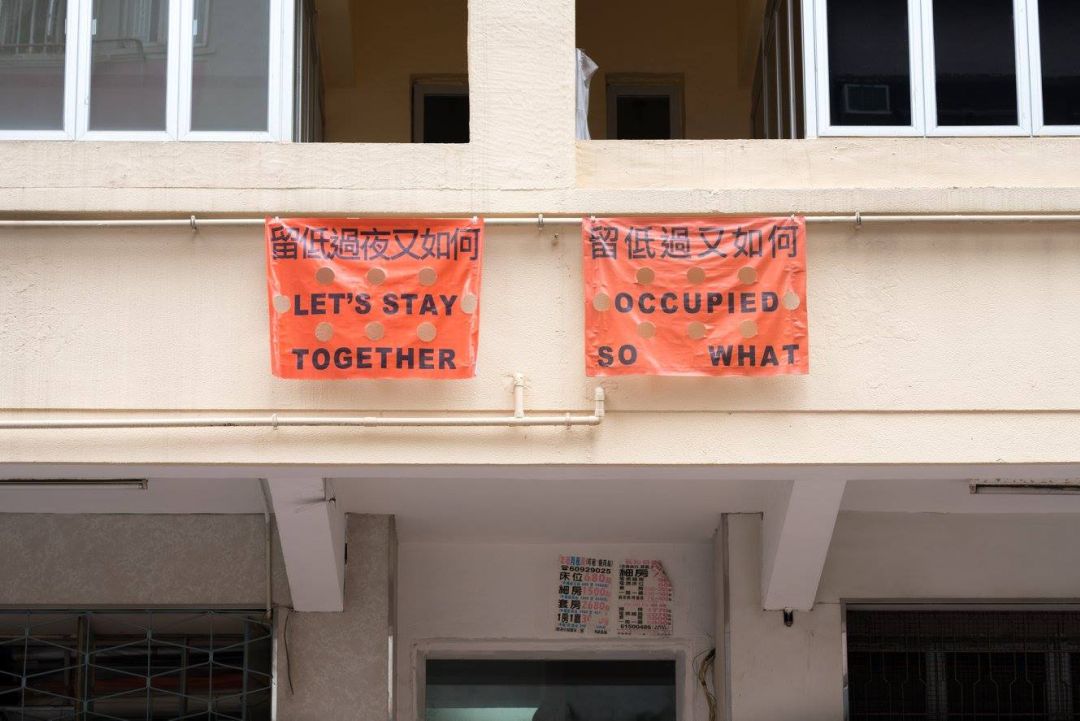 He also intervened in the space by altering its physical state – breaking the floor tiles, tearing off wallpaper, squatting in the vacant space next door. During his stay, the Mongkok (“fish ball”) incident happened. Video footage of that incident became part of his exhibition following the residency.

Ocean’s residency is interesting in the sense that it explores multiple themes: the format of residency programmes, artistic labour and production, leisure and the intervention of space/institution.