Former pro-Beijing businessman “Dream Bear” Lew Mon-hung has slammed backers of leadership hopeful Carrie Lam for spreading rumours about Beijing’s endorsing her, which he said was unfair to other candidates running for the city’s top job.

Lew was sentenced to 18 months in jail last February for obstruction of justice, but was released early on good behavior on Monday. He is set to speak on political commentator Chip Tsao’s radio talk show on Monday evening, during which he is expected to share his experience of life in prison and discuss the leadership race. The 68-year-old told the press outside Stanley Prison on Monday that four main contenders for the election – former chief secretary Carrie Lam, ex-finance chief John Tsang, ex-judge Woo Kwok-hing and lawmaker Regina Ip – are “elites of the pro-establishment camp” and have made great contributions to society.

However, he slammed Lam’s backers without naming names: “Some people have made ridiculous claims, such as that Beijing will not appoint anyone but Lam; Beijing only supports Lam; and those who oppose Beijing can never be chief executive. This is unfair to Tsang, Woo and Ip, because they have the most popular support.”

Lam and former chief executive Tung Chee-hwa reportedly stated that Beijing would not appoint John Tsang during two closed-door events, while China’s no. 3 official Zhang Dejiang reportedly told pro-Beijing electors of the race that Lam was the only leadership contender supported by Beijing.

Pro-Beijing figures such as Chan Wing-kee and David Wong Yau-kar said earlier this month that they would consider whether a candidate follows Beijing’s line. Chinese politicians and Beijing-backed newspapers have long-warned that those opposing the central government would not be allowed to become chief executive. “For this election, I hope everyone will bear in mind what Chinese President Xi Jinping has said about upholding the One Country, Two Systems policy and respecting the differences between the two systems,” he said.

“Taiwan is watching how the policy is being implemented in Hong Kong. I think unification of China is more important than this election. If our election has turned out to be so ugly, do you think our Taiwanese comrades will be attracted or repulsed by the policy?”

Lew said the focus of the election should be on who can uphold the principle, respect Hong Kong’s core values and unite society.

Besides the press, Lew was also greeted by friends outside Stanley Prison. Activist “Bull” Tsang Kin-shing hugged Lew while another friend sprinkled water on him with pomelo leaves, a Chinese tradition for washing off bad luck.

Lew said he had lost 37 pounds. “My dieting was successful. I had always wanted to lose weight.” 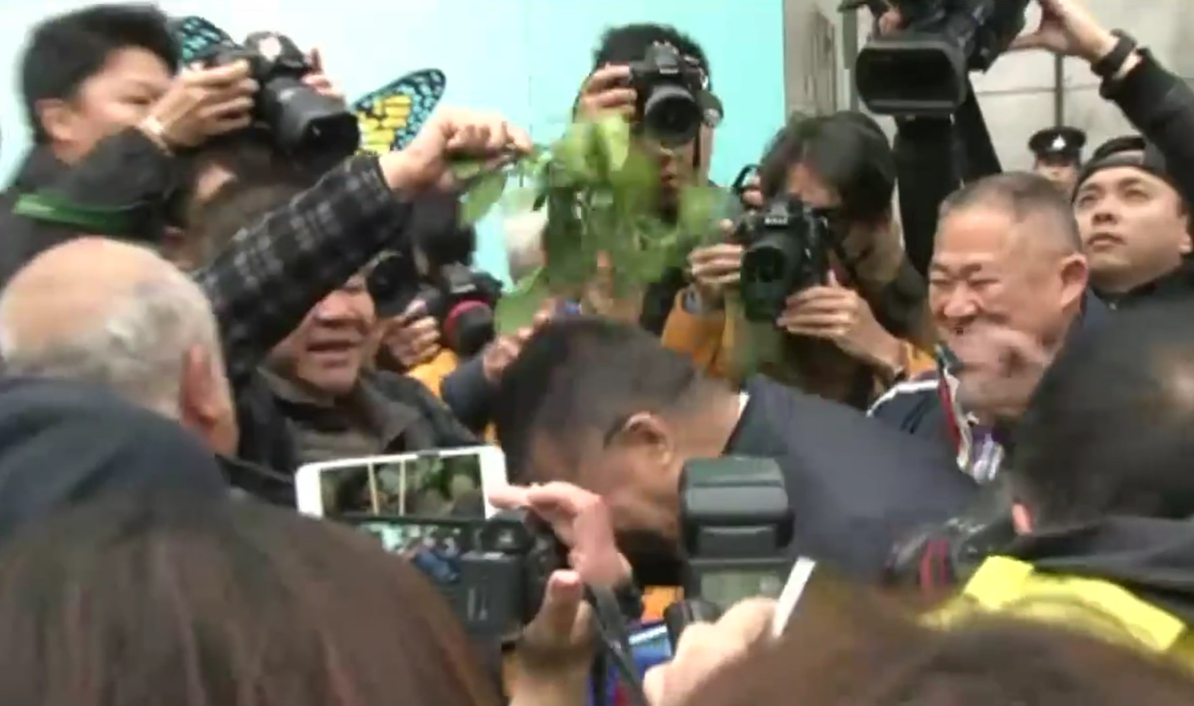 Lew will be sharing his experience in detail on Chip Tsao’s show, though Tsao cited Lew as saying that he was called “professor Lew” in prison because he often spoke about current affairs and Chinese history to other convicts and jail officers.

Lew even claimed that many prisoners did not want him to leave and were planning to ask the chief executive to increase his sentence.

Tsao said jokingly: “Unfortunately Hong Kong is a society with the rule of law, so Lew had to be kicked out because of his good behaviour. Hopefully other convicts can also be released early on good behaviour and continue learning from Lew afterwards.”

In 2013, Lew claimed in an interview that Chief Executive Leung Chun-ying lied about not finding professionals to examine illegal structures at his house on Peel Rise.

He also said Leung offered him a place on the Executive Council – among other things – in exchange of his support, but the promises did not materialise. A day after the interview was published, Lew was investigated by the Independent Commission Against Corruption (ICAC) on suspicion of fraud and money laundering when his company, Pearl Oriental Oil Limited, acquired a gas and oil field project in the United States.

Lew subsequently sent letters to Leung and the ICAC chief, threatening them to stop the investigation. He accused Leung of resorting to “political prosecution” and “political assassination.” He also said he would “perish together” with Leung if he suffered losses due to the incident.

He was found guilty of obstructing justice last year.

On Monday, Lew was asked to comment on Leung’s decision to not seek re-election. The former top aide to Leung said: “It is not worth my time talking about him because history will prove me right and justice will prevail.”