“The vast grasslands of Qinghai overwhelm the eye, the ranges of the Himalayas stretch beyond the horizons…”

Every year on October 10, hundreds sing the Ode to the Republic of China at the Red House in Tuen Mun, the legendary site where “founding father” Sun Yat-sen is said to have organised some of his dozen revolutionary attempts against the imperial Qing dynasty. 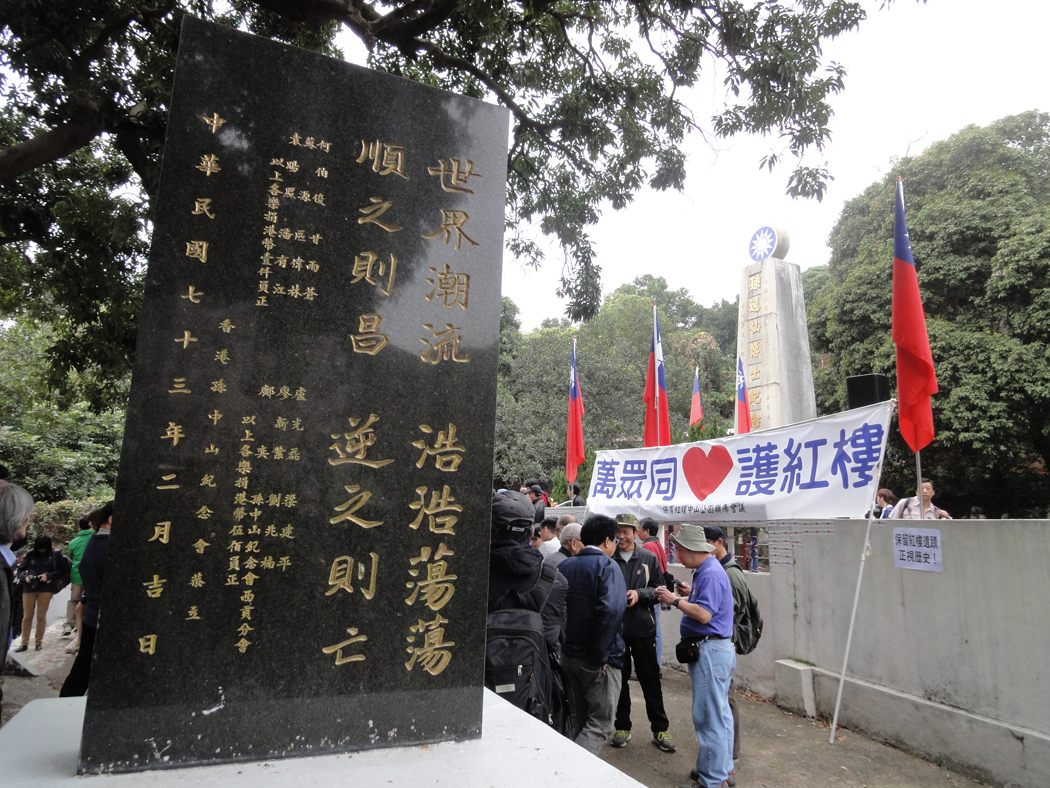 The final attempt, the Xinhai Revolution which began on October 10, 1911, succeeded. The date has since been considered the Republic of China (ROC)’s national day.

But following defeat in the Chinese Civil War in 1949, the ROC – governed by the nationalist Kuomintang founded by Sun – fled to Taiwan. The Kuomintang enforced four decades of authoritarian rule, under the pretence that the country was in a “period of mobilisation for the suppression of the Communist rebellion.”

Meanwhile across the strait, the Communist Party founded the People’s Republic of China (PRC). Humanitarian disasters under the communist regime led Kuomintang leader Chiang Kai-shek to believe he could one day retake the mainland, but that day never came.

Video: Ode to the Republic of China, sung by legendary diva Teresa Teng.

Both the ROC and PRC governments claimed – and still nominally claim – to represent the entirety of China, and refused to recognise each other.

Hong Kong, under British colonial rule, naturally became a battleground for competing interests. The Kuomintang retreat meant that many officials, businessmen and intellectuals fled to the city, where a thriving pro-Taiwan or “rightist” contingent emerged.

On October 10 every year, streets would be lined with the flags of the ROC. This was especially the case at Tiu Keng Leng village, formerly a refugee camp home to exiled Kuomintang personnel that was known as “Little Taiwan.” The Kuomintang were associated with triad groups, and mobilised rightist labour unions, confronting their communist counterparts.

But on national day in 1956, deadly riots broke out in Hong Kong, reportedly sparked because colonial officials demanded removal of an ROC flag at a Cheung Sha Wan housing site. Sixty people were killed, more than during the better-known 1967 leftist riots, and the British extradited a number of rightists to Taiwan. In the ensuing decades, governance reforms and a generational shift led to the emergence of a local identity in Hong Kong. The PRC’s market reforms wooed the city’s merchants, while ROC President Lee Teng-hui embarked upon a course of democratisation and nativisation that meant dropping “retaking the mainland” from official policy, once and for all.

Still, up until the 1990s, pro-Taiwan newspapers in Hong Kong, such Hong Kong Times and Sing Tao Daily, referred to “Republican years” and not the Gregorian calendar: 1949 was the 38th year of the Republic. They also referred to the Beijing government as “the Chinese Communists,” denying it legitimacy.

Video: October 10 Festival in Hong Kong, 1976, one year after the death of ROC President Chiang Kai-shek. Portraits of Sun, Chiang and his successor Yen Chia-kan are seen at 0:25.

But Hong Kong Times closed down in 1994, and Sing Tao Daily was sold to pro-Beijing businessman Charles Ho in 1998. The last ROC flag was lowered in Tiu Keng Leng village in 1996, and it has since been rebuilt as a high-rise housing district.

By the time Hongkongers were granted electoral rights in the 1980s and 1990s, the pro-Taiwan camp had little influence, with the 1997 handover to the PRC set in stone.

The most prominent pro-Taiwan party that took place in these early elections was the 123 Democratic Alliance, founded by the Taiwan-educated Yum Sin-ling. He won a solitary seat in the Legislative Council in 1995, but the council was disbanded on the eve of the handover.

Unable to win his seat back, Yum emigrated to the United States in 1999, and the alliance disbanded the following year, citing financial difficulties. Today, the pro-Taiwan camp is only represented through small groups, such as the Hong Kong Chung Shan Research Institute and the China Youth Service and Recreation Centre. They commemorate events such as the October 10 Revolution and the founding of the ROC mostly in private – in Chinese restaurants and community halls – with the Red House being a site of exception.

Chinese nationalism is a prevalent theme in their activities. The China Youth Service and Recreation Centre organises annual rallies – even alongside pro-Beijing groups – to the Japanese Consulate-General, demanding compensation for crimes committed during the Second World War.

At the same time, it is an ever-present contingent at local pro-democracy rallies. One of its former members was even arrested last year after allegedly shooting at the residences of PRC military officials in Hong Kong with an air rifle.

The only incumbent district councillor considered to be a pro-Taiwan figure is possibly Johnny Mak Ip-shing, chairman of the New Territories-based Democratic Alliance, serving in Yuen Long. He told HKFP that he focuses on community work with associations founded by people who fled across the border to Hong Kong in 1949, as well as services for local students studying in Taiwan. 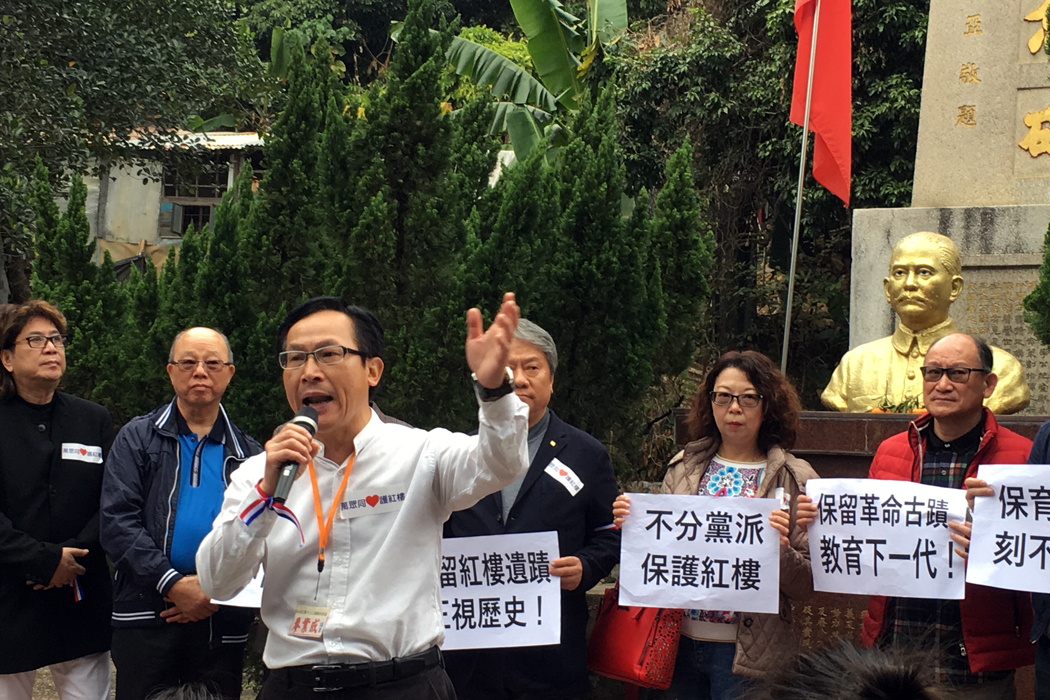 Mak added that every time there is an election in Taiwan, people from the pro-Taiwan camp would campaign for Kuomintang candidates in Hong Kong. There are officially almost a million Kuomintang members in Taiwan, and Apple Daily reported that there were 4,000 in Hong Kong as of last year.

Campaigning for Taiwanese pro-unification candidates is not a suppressed activity even in mainland China, although Mak said that the Hong Kong authorities “treat them differently according to which administration is in power in Taiwan.”

Under former president Ma Ying-jeou, cross-strait relations were warmer. In 2011, Taiwan was allowed to change the name of its Hong Kong “travel agency” – its de facto consulate – to the Taipei Economic and Cultural Office.

Mak was set to meet with former president Ma, who planned to visit Hong Kong after leaving office in June 2016, before the new Tsai Ing-wen administration blocked the visit on security grounds. “We were really looking forward to it,” he added. “However, our influence in mainstream [Hong Kong] politics is not that great,” he said, citing the lack of representation in the Legislative Council.

Ideologically, Mak said that the term “pro-Taiwan” is somewhat inaccurate: “Strictly speaking, we’re not pro-Taiwan, but we’re for a democratic China.”

He added that there is a slight difference between the pro-Taiwan camp and the mainstream pan-democrats, the older generation of whom also regularly campaign for democracy in the mainland: “We support how it has been implemented in Taiwan.”

On the island, however, the Kuomintang has been accused of moving too close to the PRC, initially economically and now politically. Chairperson Hung Hsiu-chu has voiced support for a “One China, Same Interpretation” policy, which critics argue would diminish the standing of the ROC as a sovereign state in exchange for some form of recognition by the PRC. Mak refused to criticise the Kuomintang, but said that the policy “would not be a good thing.” Moreover, as in Hong Kong, a significant number of young people no longer identify with China. The Democratic Progressive Party, whose charter features a pro-independence clause, is in power.

“After all, we’re not Taiwanese,” said Mak, “so we respect the choice of the Taiwanese people.” He added that he particularly welcomed the peacefulness and stability that characterised transitions of power in Taiwan.

“After all, Mr Sun Yat-sen spent his youth in Honolulu and Hong Kong… he wrote better English than he did Chinese… and still he sacrificed so much,” he said. “I think he can be a source of inspiration for young people.” There are growing fears that the historical Red House in Tuen Mun is facing demolition after it was purchased in November 2016 by a mysterious new mainland owner, who went on to knock down its surrounding walls and vegetation.

On whether the house could have been targeted for political reasons, Mak said that he “could not rule out the possibility.” He told HKFP that it possessed immense historical value, given that archaeological records reportedly date its construction back to the 1900s. Therefore, it might have been a place where many of Sun’s revolutionary comrades, such as Huang Hsing, who led the penultimate Guangzhou uprising of April 1911, stayed.

As the residence of these revolutionary figures – and the only open-air space in Hong Kong where the ROC flag is flown – the building is a political symbol: “Once upon a time, what it symbolised was called ‘republicanism,’ now it’s called ‘democracy’.” Last Sunday, hundreds of activists rallied at the Red House, calling for the Hong Kong government to offer it protection as a historical monument. Mak made an impassioned speech in front of the crowd, arguing his case through patriotism.