We certainly live in crazy times. One would have thought that the recent jailing of seven police officers for beating up a hog-tied detainee for all the world to see would be something everyone would want to put behind them. But no. Not the Hong Kong Police Force. In a show of force, not seen since 1977, when they objected to the ICAC investigating corruption within their ranks, they filled a football pitch full of supporters. 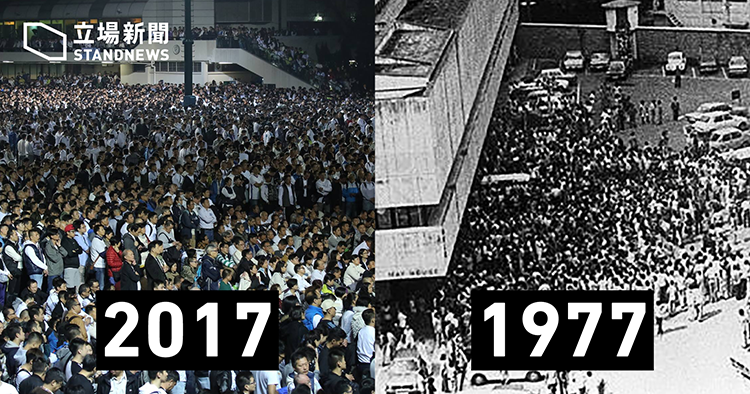 Dressed in white, as though someone had died, they chanted that they would fight for justice. They compared themselves to Jews in World War II and declared they would lobby for a new ‘contempt of cop’ law, to stop people insulting them. They claimed it was time to claw back their dignity, but conversely, it left many in Hong Kong shocked at what they were witnessing. Could it be true that so many people, charged with maintaining the law misunderstand our legal system and their responsibilities so profoundly? Or as one netizen remarked: “These people have just staged a farce for the civilized world!” The Police General Orders prohibit the police from engaging in political rallies. And in a shameless attempt to pretend the event was not, the media were not allowed into the venue, even though there were politicians on stage, speeches, dress codes and chanting. The meeting was a political rally by anyone’s measure, other than the police’s own proclamation.

Some officers who spoke to the press rambled about supporting the families of the officers in prison. Or they said that the deed was wrong, but the sentence was too high. Both of these ideas make no sense and fly in the face of what one should expect from a supposedly, professional, disciplined Police Force, untainted by corrupt thinking. Judges don’t just pull sentences out of thin air. They base them on strict, prescriptive guidelines with precedents gathered over time. Where the rule of law exists, everyone is equal in front of the law, even the police – and the reality is, this is what the thousands of police found so unpalatable, just like in 1977. Deep down they think that the law shouldn’t apply to them. And, if it does, it should be lenient because of the sacrifices they think they’re making. The law is not, as many of the protesting police seem to believe, a comparative exercise in values and beliefs that can be applied selectively and politically. It most certainly is in China, but not in Hong Kong, yet.

The fact that the officers received the heaviest sentence out of everyone who was involved in the 2014 Occupy reflects the serious nature of their actions. The sentences cannot be mitigated downwards because others received lighter sentences for smaller infractions. The seven officers who went to prison are criminals; this is not a matter of opinion, it’s a legal fact. And if a Police Force, en masse, supports criminals then the public’s confidence in them will plummet.

A disciplined Police Force does not have the luxury of nuance on such matters if it wants to maintain any semblance of integrity across society. In 1977, the police had little credibility with large swathes of the public because they had lost sight of what their role in society was. Likewise, 40 years later, Hong Kong’s Police Force has become highly politicized, and their rally was the culmination of them struggling to understand why they could have been treated so badly by the courts when they have served one faction of society so diligently.

Wednesday’s police rally will be marked in history as the coming-out of The Force as a self-serving, factional block in Hong Kong politics, with their own demands and expectations. Like a spoilt, petulant child, not content with having an astronomical budget to buy anything they desire: HK$18.5 billion. They will now begin to apply political pressure, through their proxies in the legislature, to push for a contempt of cop law to make them infallible. We should all fear such a law. It’s already been made very clear that our Police Force rejects that it should be confined by its own regulations or the courts. How much more audacious do you think they will become when they are above criticism?

After staging a ludicrous rally in support of criminals, the police now think they should be above the law