At first glance, you might think you’re in China. Walking through town, you see numerous Chinese signs in the streets, papers lanterns and even steamed bao buns. But this is Songkhla, one of the oldest cities in Thailand.

How did the Chinese get here in the first place and why didn’t the Thai King just kick them out? 200 years ago, the Chinese were starving because of war and famine. Many of them left and migrated to towns all around the world. A few came to southern Thailand and landed in Songkhla, then just a small port city on the Gulf of Siam. One of those first immigrants was the great-great grandfather of Mr. Chanin Sakarin. Today, he’s the Vice President of Songkhla’s Hokkien Society.

“Yes, they were from Fuijan provence. They made Songkhla their new home and brought their traditions with them.”

The Chinese who came to Songkhla didn’t get any kind of financial support from the Thai King. But they were hard workers and when they had saved their money – they built shrines to house their gods. 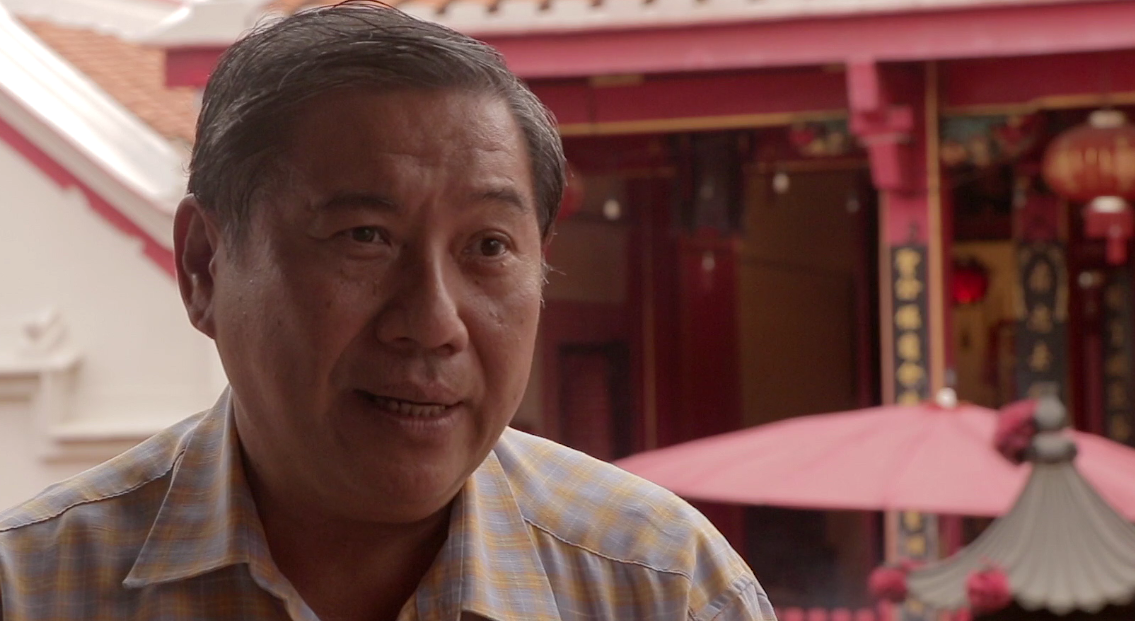 “When you migrate to another land, you’ll have many adventures and things you have to deal with. I think the gods can support you and give you spirit to fight,” says Mr. Sakarin.

As Songkhla grew, King Rama III back in Bangkok took notice of the Chinese who had crashed his kingdom. Of course he could have just sent his army kicked these immigrants out. Instead, however, the King did something very clever. He raised them up. He elevated Songkhla from a village to an official Thai city and built the residents a grand city wall.

“He wanted to make Songkhla a stronghold for the government in the southern part of China.” To prove to the Chinese that they were now an official part of his Kingdom, Rama III sent a royal gift. It’s called a city pillar. Similar to cornerstones found in American architecture or city gates in Europe, a city pillar marks the symbolic foundation of towns in Thailand.

“In Thailand we have a tradition that when you built a new house, you put the first column in the ground.”

Throughout Thailand, city pillars were set up in Buddhist buildings, because the King and the Thais were Buddhists. In Songkhla, however, the King allowed the Chinese to put their city pillar in their shrine alongside to their Chinese gods. It was a symbolic statement. In doing this, the King was saying that although these Chinese had come to Thailand without permission and had a different religion – they were still a welcome part of his kingdom.

Since then, the city throws a big party once a year at the City Pillar Shrine, as it’s known today. Songkhla has also prospered. It’s one of the wealthiest cities in all of Thailand.

“Here is the Chinese and the next road over is Muslim, and another is Thai. We are in a very tolerant society that we can accept differences in beliefs,” says Mr. Sakarin.

HKFP Video: How China 'invaded' Songkhla, one of the oldest cities in Thailand