The British foreign ministry prepared a message of condolence for then Chinese leader Deng Xiaoping in 1987, ten years before his death, according to newly declassified files. In April 1987, the Foreign and Commonwealth Office wrote to Thatcher’s private secretary about considering contingency plans in case of the sudden death of two elderly principal leaders – Deng who was 83, and Chinese President Li Xiannian who was 78 at the time. Deng died in 1997, after Li died in 1992.

“[A] recent confidential report of the illness of President Li has brought this into immediate focus,” the document read. 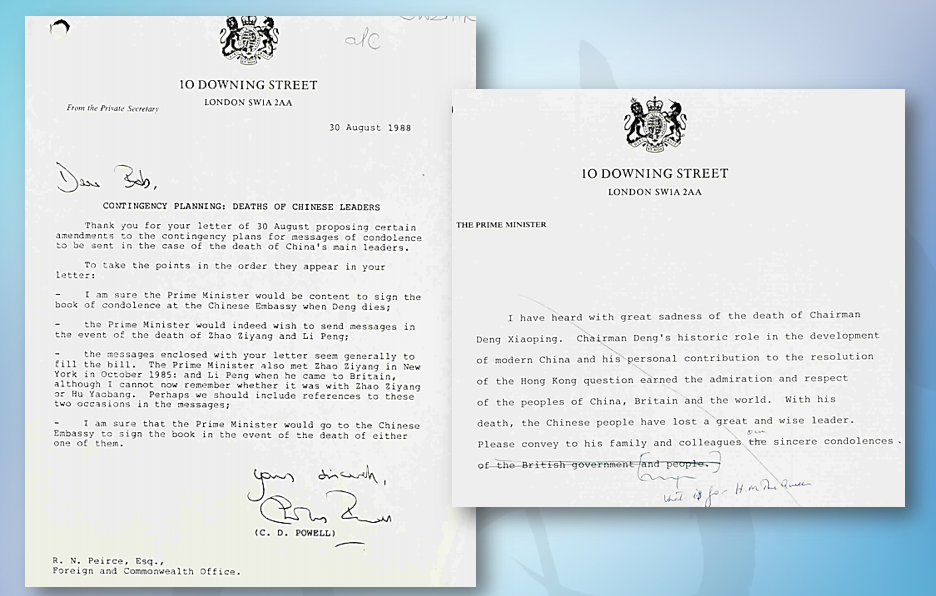 The draft message said: “Chairman Deng’s historic role in the development of modern China and his personal contribution to the resolution of the Hong Kong question earned the admiration and request of the peoples of China, Britain and the world. With his death, the Chinese people have lost a great and wise leader.”

In August 1988, the foreign office also prepared message of condolence for Premier Li Peng, 59 at the time, and Chinese Communist Party General Secretary Zhao Ziyang, 65 at the time. A man looks at a picture of China’s late paramount leader Deng Xiaoping at an exhibition of the innovative reformer in Beijing, 20 August 2004. Photo: Peter Parks/AFP.

The draft message for Zhao, which would have supposedly been sent from the Prime Minister, said: “He will always be remembered for his contributions to the modernisation of his country; and I personally will always remember my meetings with him during his visit to Britain in 1985.”