Beijing workers sitting in a bulldozer shovel shout slogans as they drive their engine in front of the Forbidden City in Tiananmen Square 25 May 1989. Photo: Catherine Henriette/AFP.

On June 9, 1989, the emergency unit of the Foreign and Commonwealth Office in London said in a document that the Beijing embassy informed them they have issued six special visas under their authority.

“It is, however, possible that the activities of security forces against student ringleaders could lead to further requests from Chinese nationals for visas and/or political asylum,” the document read. A Chinese woman in a military helmet and a jeans jacket gives V sign to cheer up demonstrators passing by on May 18, 1989 on the main street to Tiananmen Square. Photo: Nachiro Kimura/AFP.

An unnamed source – who was familiar with how activists escaped from China – told Ming Pao that the six people granted visas were not the students protesting in the movement. The six were Chinese officials who were sympathetic to the movement, since the date on the document preceded the Hong Kong-based rescue mission Operation Yellow Bird.

Ming Pao reported that the mission assisted more than 500 people to move abroad, via Hong Kong – 40 of which went to the UK. The source told the paper that sensitive individuals – those who had police or military backgrounds – would have to leave as soon as possible after arriving in British Hong Kong, and the UK government would grant special visas.

The documents also detailed evacuation plans for Hong Kong people and the British community in Beijing.

British Ambassador to China Alan Donald wrote to London and Hong Kong on June 5 that “I strongly recommend that Hong Kong government should arrange a further charter flight to take off members of Hong Kong people who are getting very nervous.” A young man with his fist raised uses a loudspeaker to adress students and local people gathered at Tiananmen Square in Beijing on May 14, 1989. Photo: Catherine Henriette/AFP.

“It should arrive not before noon, but if possible be able to take off before nightfall. I hope it could help to take off any British subjects who may be stranded at the airport,” he wrote.

For the British community, Donald asked that “As a contingency, I would be grateful if HKG could discreetly establish how many special charter flights could be available at very short notice if required to take off between 500 and 600 people to Hong Kong.” 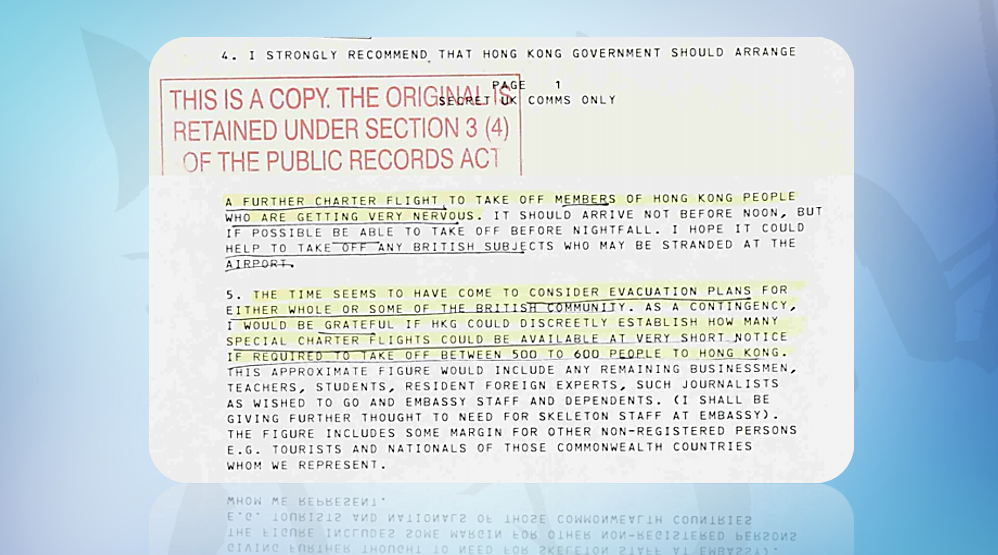 Thatcher agreed that “the Ambassador should certainly be given the authority he needs to charter any aircraft required at HMG’s expense.”

Meanwhile, according to the documents, Beijing embassy staff members were also in a dangerous situation.

On June 7, Donald wrote that “a large body of civilians, some with weapons, has been reported approaching Eastward down Chang’an [Avenue] to the Jiangguomenwai intersection.”

The intersection was where many embassy families lived: “Several troop movement have taken place at that point, with volleys being fired in the air. One British flat was hit by a stray bullet (no casualties).” 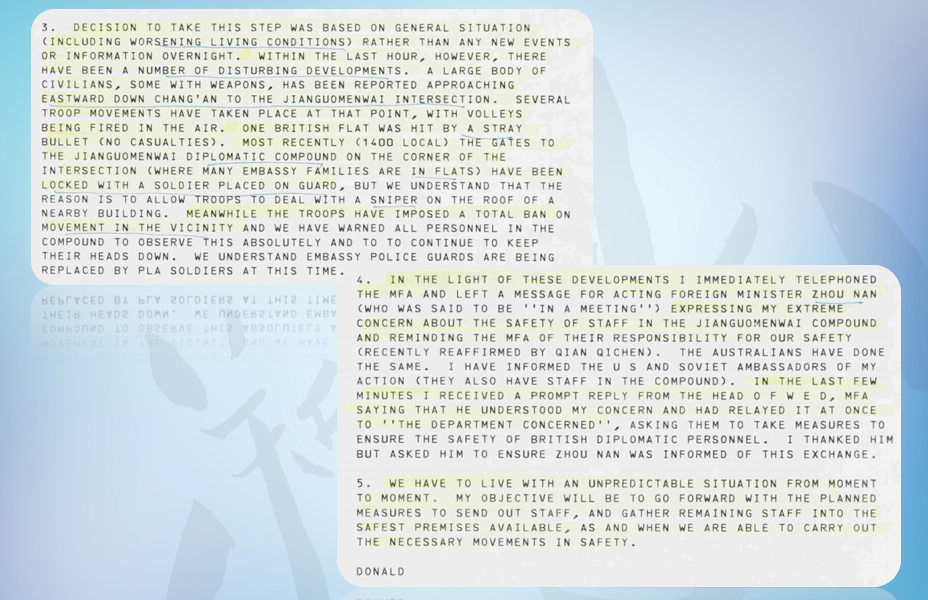 The gates to the Jiangguomenwai diplomatic compound on the corner of the intersection, Donald said, were locked with a soldier placed on guard.

“But we understand that the reason is to allow troops to deal with a sniper on the roof of a nearby building,” he wrote.

Embassy police guards were also replaced by Chinese soldiers. Donald called acting foreign minister Zhou Nan, concerning safety of embassy staff, but he was said to be in a meeting.

Then on June 9, The Foreign Commonwealth Office’s emergency unit wrote that the embassy had received a diplomatic note from the Chinese foreign ministry, which said that the Chinese government attached importance to the issue. China said that it had instructed armed forces and public security forces on diplomatic compounds “to be responsible for the safety of those areas and to increase their vigilance.” Chinese onlookers run away as a soldier threatens them with a gun on June 5, 1989 as tanks took position at Beijing’s key intersections next to the diplomatic compound. Photo: Catherine Henriette/AFP.

“So much for the good news,” the FCO’s emergency unit wrote. The bad news, according to the embassy, was that embassy officials were also needed to strictly obey martial law.

“Embassy vehicles should not be used for purposes other than those appropriate – otherwise their safety cannot be guaranteed,” the note read. “The Ministry advises that during Martial Law foreigners should not be out after dark. The Ministry requests Embassies to control their personnel and to keep an eye on all kinds of weaponry.”

The UK embassy voiced opposition to the suggestion that they should not drive after dark – as they may need to go to the airport – and pointed out that they did not have weapons.

The massacre occurred on June 4, 1989 ending months of student-led demonstrations. It is estimated that hundreds, perhaps thousands, of people died when the People’s Liberation Army was deployed to crackdown on protesters in Beijing.