Ms. Liu Huizhen (刘惠珍) is a villager in the District of Fangshan (房山区), on the southwestern outskirts of Beijing. She’s a victim of forced demolition who fought hard to preserve her property but lost it anyway. This year, she is one of the 70 or so Beijing residents who organized to compete for seats as district People’s Representatives. China held its once-every-five-year grassroots elections for county-district level People’s Representatives on November 15. In a joint statement, Ms. Liu and other independent candidates promised that “they will make sure every voter knows who they are and how to reach them with their problems, and as their representatives, will monitor the government and its functions.” Financial Times, Washington Post, and other media outlets reported Ms. Liu’s candidacy. On November 17, BBC posted a striking 5-minute video of its Beijing correspondent John Sudworth visiting Ms. Liu, showing him blocked and manhandled by a throng of plainclothes cops, or government-hired thugs. The video went viral on WeChat, and got a lot of play on Twitter too.

On November 19, a CCTV journalist based in London — according to her Twitter bio in any case — with the handle @KongLinlin, accused John Sudworth of making “fake” news. She has since been identified as Kong Linlin (孔琳琳).

Several Twitter users, including BBC’s Stephen McDonell, asked her to point out which part of John Sudworth’s reporting was fake. She replied in Chinese:

“Liu Huizhen has been party to a lawsuit because of a housing demolition, and a BBC journalist in China got himself involved in the Chinese judiciary, trying to artificially lump together Chinese grassroots elections with a demolition suit. When he reported for Western audiences, he made no mention of the woman’s background, misleading people exactly the way he reported the Obama Red Carpet Gate.”

Ms. Kong is referring to the fact that Liu sued Fangshan District Housing and Urban-Rural Construction Committee for unlawful demolition and lost in the first instance and then, in 2015, the appeal.

In his reporting, Sudworth made no mention of the demolition suit, as it’s irrelevant to the elections. So how did Sudworth “artificially lump together Chinese grassroots elections with a demolition suit”?

Does Liu’s “background” matter in the elections, and in her role as an independent candidate? It appears to me that it’s the CCTV reporter who’s lumping together Liu Huizhen’s lawsuit with her participation in the elections.

Ms. Kong went on to explain why the story is supposedly fake:

“Isn’t he deliberately blurring this woman’s lawsuit and using Western political concepts to get involved in China’s rural economic disputes? Hasn’t he been making hate propaganda for BBC?” (Emphasis in original.)

Continuing to explain the alleged falsity of Sudworth’s reporting, she tweeted (English her own): “Deliberately reporting on unclear fact , depend on single resource ,misleading the audience .That is also a fake news.” (A Twitter user commented: “this is not how you type punctuation.”)

Deliberately reporting on unclear fact , depend on single resource ,misleading the audience .That is also a fake news. https://t.co/ePxiRICNL9

She picked it up some two hours later on November 20:

“A Chinese person who doesn’t abide by Chinese election laws but fantasizes that she can ‘participate’ in elections in the American way. It’s inevitable that she’d be ‘locked up’. Ms. Liu also supported Hong Kong independence — how could she have the right to be elected?”

Ms. Liu may have lost a civil lawsuit against her local government, but she’s not a criminal and has not been deprived of political rights. In November 2014, Liu and nine others in Beijing were detained for holding signs to support the Umbrella Movement in Hong Kong, and she was released after seven months in detention.

By now, many Chinese Twitter users were arguing with and ridiculing Kong Linlin.

A few hours later, Ms. Liu Huizhen, who recently joined Twitter, became aware of the unfolding argument and tweeted: “You are a Chinese journalist, and you have no regard for fact. All you do is sing the praise [of the Party]. Have you eaten up your own conscience?”

“I’m Liu Huizhen,” she continued, “they blocked me from leaving my home because I declared that I would take part in the elections as a candidate. The world wouldn’t know such ugliness if the BBC didn’t happen to capture the truth. Ms. Kong Linlin, you may eat you dog food with your conscience unperturbed, but you’ve got no right to insult me!”

“I’ve decided to tweet more details of my candidacy. @KongLinlin, open up your titanium dog eyes to see who’s violating the law,” Liu went on.

“I submitted my name [to the district’s electoral committee] in mid-October, 2016 to stand for election. Around 10 am on October 30, I picked up the voter recommendation form and candidate CV form. Around noon on the same day, I began to seek support in the No. 50 electoral zone. By the next day, 24 voters in my zone had signed on to recommend me as a candidate for office of People’s Representative.”

According to Article 29 of China’s Electoral Law, any citizen with the recommendation of 10 or more voters can enter the primary selection. Liu continued, “What the BBC video revealed was only a tiny fraction of my far more complicated experience. The repressive agents were so blatant that not even policemen dared intervene. So you tell me: who is backing them? I can’t imagine there are journalists like Kong Linlin who would defend them! I ask the whole world to judge this. Thank you everyone!”

She attached photographs of the neighborhood posting of five candidates for the No. 50 electoral zone, and her ballot, where she wrote in herself and another candidate.

An hour later, the CCTV journalist resumed her attack:

“You should also disclose how you received guidance, and how much funding you received, from overseas anti-China hostile forces.”

“How did BBC accidentally videotape you? How did you accidentally have photos as proof when you supported Hong Kong independence? You’ve actively taken part in anti-China political activities. Stop pretending you’re an innocent village woman.”

Ms. Kong provided no evidence for these accusations. To a Twitter user who pointed out her distorted logic, she replied: “I also support legitimate candidates who use the ballot to gain rights, but those who are funded by foreign political forces will have no lawful right to stand for elections in China.”

To a Twitter user who criticized the Chinese government’s use of thuggery to stop independent candidates, Ms. Kong has this to say: “China prohibits the use of illegal assembly to participate in People’s Representative elections. If [she] wants to be elected as a representative the American way, [she] should go to the United States.” 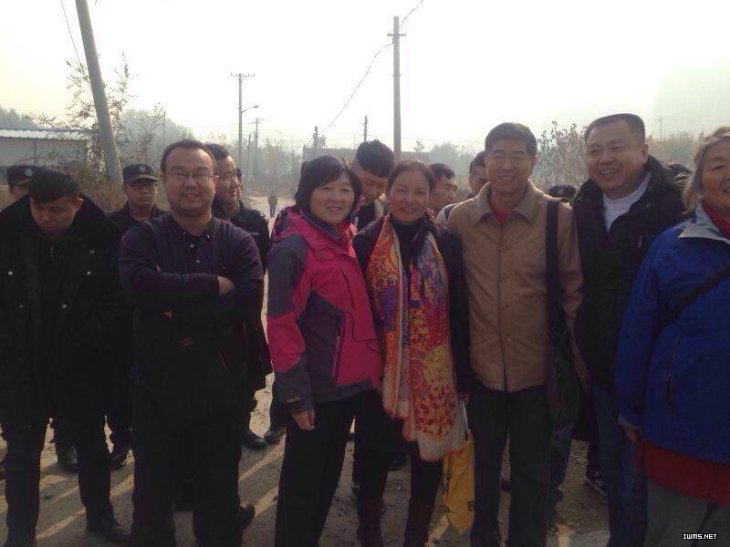 On November 3, 50 or so supporters came to Changyang Township to campaign for Liu. I suppose this is the “illegal assembly” Ms. Kong was referring to.

One comment asked Ms. Kong: “How many people together constitute ‘illegal assembly’?” while another comment pointed out: “So far, Ms. Liu’s ‘violation’ of the law only existed in your mouth, but I saw with my own eyes the violation of law by the thugs, I also see that you are defending such violations of the law. …By defending such violations of the law, you don’t show your high ground in rule-of-law thinking, but the lowness of your moral standard.”

To a Twitter user who asked Ms. Kong to explain what a “legitimate” candidate is, she replied:

“First of all, [a candidate] cannot be manipulated by foreign forces. This is a basic requirement for candidates in any country.” She didn’t reply when the same Twitter user asked her: “Which law defines whether or not a candidate is ‘manipulated by foreign forces’? Who has the right to define it? Through what procedures is it defined? Or is it just an arbitrary decision from the lips of the relevant organ?” (i.e. official government body.)

Finally, CCTV’s Kong Linlin had this to say to Ms. Liu Huizhen:

“Ms. Liu, to petition your case, you go to the court. Nobody is blocking you from taking part in the elections, except that you have to go through appropriate procedures and abide by Chinese law. You mix your petition with illegal assembly, and in addition, you collude with foreign forces, and support Hong Kong independence. You are doing so many things, and each one of them endangers the country. Don’t be sold out by those people in the end.”

Because of this prolonged argument between Ms. Kong Linlin and Ms. Liu Huizhen and a good number of Chinese Twitter users, I scrolled down Ms. Kong’s Twitter feed and had a few more peeks into her world:

Ms. Kong in the Calais Jungle, a former refugee camp in France, in October.

The world according to a CCTV journalist based in London