Under the dim yellowish light, a woman is preparing the bar to welcome its customers later today. She checks there are sufficient bottles of wine, then walks over to another side of the bar to check the roster. From time to time, she takes out her phone and speaks into it, making voice notes. Grace Ma Lai -wah, who owns Club 71 in Central, was diagnosed with attention deficit hyperactivity disorder (ADHD) just over a decade ago. It means the 63-year-old tends to forget things and relies on her smartphone for reminders. ADHD was relatively unknown in Hong

Kong in the past. It is a brain disorder characterised by ongoing symptoms of inattention, hyperactivity and impulsivity that interfere with daily life. People with ADHD tend to have difficulties organising tasks, remembering things and maintaining focus on tasks that require sustained mental effort, especially those that are monotonous and repetitive. However, they can be hyper-focused on the things they find particularly interesting.

These days, more people are aware of ADHD, but most perceive it as a childhood disorder. ADHD in adults was not recognised until relatively recently. In 2013, The Diagnostic and Statistical Manual of Mental Disorders – Fifth Edition (DSM-5), published by the American Psychiatric Association, suggested society should also be concerned about ADHD in adults.

DSM-5 says ADHD usually begins in childhood, with symptoms first appearing before the age of 12. This is a revision from the earlier diagnostic criteria that symptoms should be present before the age of seven. The symptoms can continue into adulthood, but society’s previous lack of awareness of ADHD and current ignorance of adult ADHD means many adults who have it do not know about their condition.

Many will have gone through life not understanding why they find it so hard to be attentive especially when they are busy. They are likely to be frustrated or even depressed because of continued underachievement.

Ma is one of them. After struggling with frustrating failures, she says she was glad to be finally diagnosed, even though she was already in her 50s by then. The diagnosis seemed to explain her meandering life path.

At school, she had always performed excellently in most tests but failed in examinations. She failed at three consecutive attempts to pass her nursing qualification exams although she was often top of her class at nursing school.

The failures dragged her into depression. “ADHD” Things were no easier when she first started running a bar in the 1990s.

“I made mistakes at every step and at all times,” she says, from forgetting to write down customers’ orders to collecting payment.

To a certain degree, being her own boss made things easier for Ma. Not so for an employee who had ADHD. Ma says she hired the youngster after she had already been diagnosed and understood the disorder.

She tried her best to help the employee and did not scold him when he was late for his shift or even failed to show up. But the other staff were not so sympathetic.

Support and understanding from family and friends is important for those with ADHD. Ma’s boyfriend reminds her to take her medication every day. She also seeks help from her friend, Dr Eunice Wong Yuk-chun, who first spotted that Ma had ADHD.

Wong is a medical doctor, the founder of the ADHD Foundation and was herself diagnosed with ADHD in 2005. Wong recalls how she used to keep stopping when she was replying to emails, continually minimising the windows. 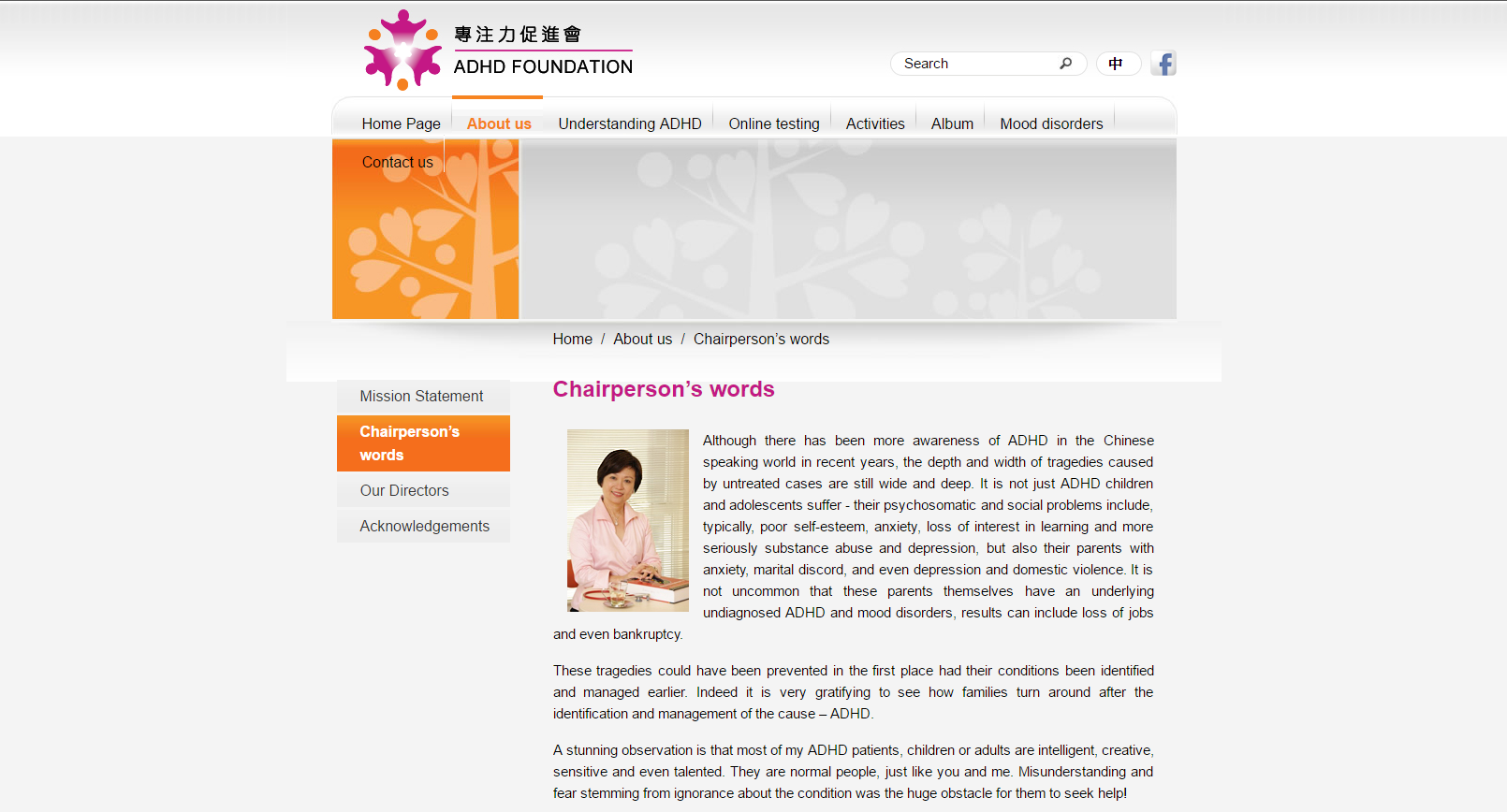 “At the end of the day, I minimise all without sending them out because I am indecisive.”

Wong says this is a typical experience for someone with ADHD and can lead to underachievement.

“The under-achievement happens automatically, but you scratch your head unable to figure out why,” says Wong, “Why things cannot go smooth despite my diligence?”

After she was diagnosed Wong started medication but she often forgot to take her medicine. The assistant at her clinic, who has helped her for years, often reminds her to do so and is one of her important social supports.

Apart from inattention and forgetfulness, Wong experiences another aspect of ADHD – hyper-focus. Sometimes, she incorporates the interests of her hyper-focus into her interactions with her patients. At one time, she was interested in palmistry and studied her patients’ palms for several weeks. Another time, she was so interested in the self-help book The Truth About Love that she made a PowerPoint of over 200 slides about it and shared it with her patients.

“Some patients think my symptoms are even more serious than theirs,” Wong jokes.

ADHD can be hereditary and Wong’s son and daughter both have it. But with treatment, they have been successful in their academic life and both went to university. This highlights the importance of raising awareness of ADHD so people can understand their condition and get treatment.

Wong has seen many patients who suffer from under-achievement and end up addicted to drugs, to gambling and to romantic relationships.

“If an ADHD patient does not know he or she has ADHD, a lot of tragedies will happen,” she says.

Yu Kai-leung, the 34-year-old founder of ADDult Value Association (ADDultValue) agrees. His association is aimed specifically at adult ADHD. “Adults [with ADHD] are different from children.” Yu says, “I feel like I wasted too much time. If things could start over again, and I could spot [my ADHD] earlier, then it would definitely be different.”

This is a wish shared by many adults with ADHD. Yu thinks the lack of social awareness is the key problem. Although media coverage on ADHD has increased in recent years, adult ADHD is still widely misunderstood.

ADHD symptoms are often interpreted as bad habits rather than expressions of an attention disorder. The lack of awareness extends to the medical sector, resulting in a lack of specific services for adults with ADHD. Without recognition from the government, many organisations fail to provide support to adult ADHD patients. To solve this problem, Yu says there is a need for more civic education. 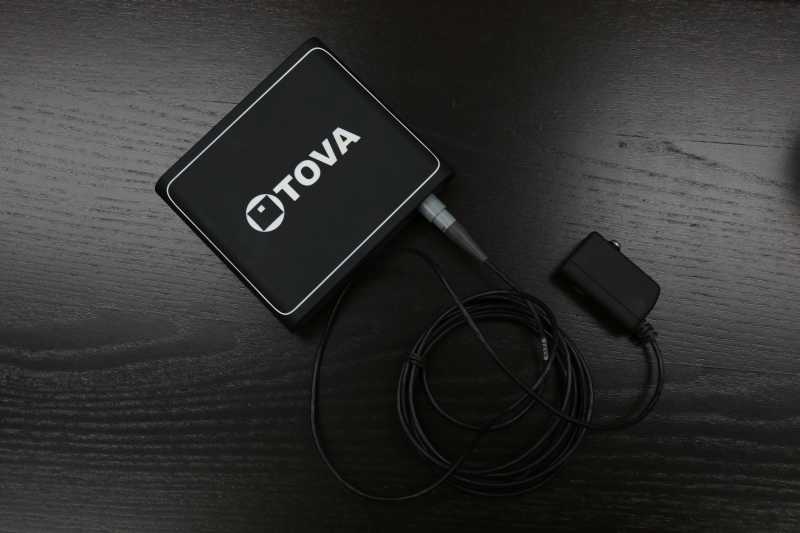 A device for the Test of Variables of Attention, commonly used to help diagnose ADHD. Photo: Varsity

Psychiatrist Wong Kai-cho agrees and says the lack of awareness of adult ADHD is partly caused by late diagnosis. The diagnosis is not straightforward, because it cannot be made by counting symptoms alone. Wong says even when a person possesses some symptoms, it is important to consider how long they have been present.

It is harder to diagnose an adult than a child and Wong says he sometimes has to ask the patient’s parents and classmates about childhood details to determine whether the symptoms are of ADHD. Then the patient needs to tick a symptom checklist and take a 21-minute neuropsychological test to measure their responses to stimuli.

After excluding the possibility of other conditions by completing a physical check-up, psychiatrists make a diagnosis by referring to the patient’s test result, self checklist and background information. The process requires both medical knowledge and diagnostic experience.

Despite these difficulties, diagnosis and treatment for ADHD can change the life of a patient. Forty-year-old Amanda Fok Choi-ling is a professional emcee. She was diagnosed with ADHD about six or seven years ago after suffering from emotional problems when she failed to meet the demands of completing her master’s degree.

Amanda Fok’s work as an emcee makes full use of her speaking talents. Photo: Varsity.

Being an emcee requires a high level of attention and memorisation skills, which may seem like too much of a challenge for someone with ADHD. But for Fok, this is her field of hyper-focus and a platform for utilising her talents in communication.

Although Fok receives medical treatment, she says medication alone is not enough – it should go hand in hand with behavioural therapy as the latter teaches patients ways to better carry out different tasks and brings concrete changes to their daily lives.

Fok says it is important for people with ADHD to discover what their talents are and choose jobs that are suitable for them. For her part, she chose a job requiring creativity instead of discipline, which suits her own character.

Referring to the discussion of ADHD in the book, Driven to Distraction, by Edward M. Hallowell and John J. Ratey, Fok says: “ADHD is just like nearsightedness. You surely cannot see things clearly without glasses if you are nearsighted, but if you have the right pair of glasses, things become clear.” Fok understands her talents and her limitations. She knows it is hard for people with ADHD to complete a long-term project by themselves. They need more systematic, well-organised people to help them execute the plans and ideas they have.

“It is not about who is better and who is not,” she says, “Just like Steve Jobs and Tim Cook. I am the Steve Jobs with ideas but need Tim Cook to make it happen. It is how the world finds balance.

The challenges of being a hyperactive grown-up