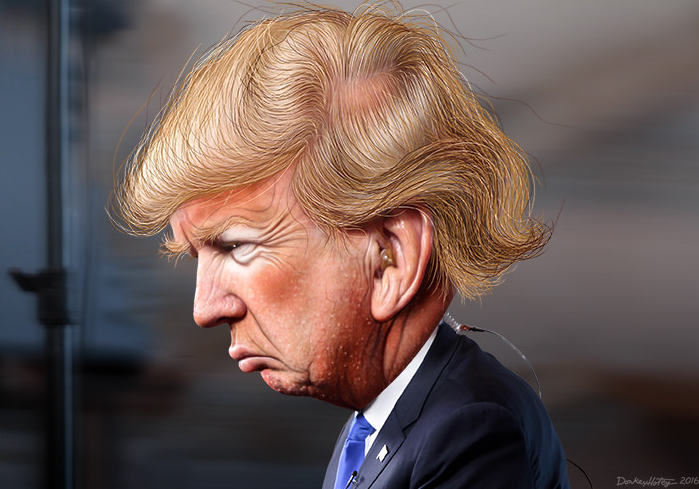 If Trump’s monstrous maneuvering is meaningless to the unimportant, it has become the act to follow for the unprincipled. British connivers foreran it with democracy’s version of methamphetamine, a referendum, and established government of the foolish for the foolish by the dregs.

A spread of European countries are lining up elections where voters pant to install cozy fascists, with or without gold bath taps (France with, the Dutch without), which brings us to the town of the golden toilet, Hong Kong.

We have an election coming up for the Chief Executive which has a constituency of, effectively, one. Once upon a time, there may have been anything up to nine voters but things have consolidated rather of late and this man, the Voter, may be considering that Hong Kong is weary of elitist, immigrant ideas  and needs a Trump trick. To hand for this, in remarkable matching colours, is Mr Cecil Chao.

Mr Chao, who recently told all to Forbes magazine, is, like Trump, a property developer of the second rank – but with more success. He too is outspoken in views accumulated over many decades, unsurprised  by offence given or taken, and a proud and confessed womaniser in the traditional style- in this case a Chinese one, in that several women may be held at one time and without ceremony.

Unfortunately for the Voter, Mr Chao probably does not want to work for him so Chao’s daughter and deputy, Gigi, a talented businesswoman, charity worker, helicopter pilot, and the world’s most famous lesbian, will not become Chief Secretary.

This will turn the Voter to something more dry and monochromatic but, in its way, as amazing and implausible as Chao or Trump. He will have CY Leung all over again. Of Leung’s two predecessors in this benighted role, one drove English from schools and penned in the sidewalks with railings, and the second poured the most concrete of any local ruler to the least good effect… yet Leung’s popularity polls go fathoms deeper. Taxi drivers splash their windshields with spittle at the mention of his name. Even members of the business elite, who can see revolution in change to a bus route, want him gone. ‘ABC’ – anybody but CY- they all cried. The Voter has listened to that, looked at the great Trump paradox and will go not just for more of the same but the same unabashed and unashamed.  ‘NBC’- nobody but CY- will be the result. As my chum said, anything is possible.

To be fair, a foolish notion in this setting, the Voter hasn’t got much of anybody else to shine his favour on. An elderly judge gave the judiciary retirement home the slip and put his name down.  There might have been Jasper Tsang in the mix but there is a bit of the Bernie Saunders about Jasper and he seems to have got the message.

Financial Secretary John Tsang. who teeters at the edge of contention, once sent me six thousand unsolicited dollars. He appears in fencing gear with students on a television API, takes headers to flying eggs and smiles a lot. This is weird rather than wonderous. So is Regina Yip, the eternal secret policewoman, no matter how many theses she writes or parties she forms. When she breaks into a sweat, the droplets spell Article 23 across her forehead. Of course, Article 23’s time will come and soon, but she is not the one to deliver it. That is for CY, the man who waited out Umbrella in transcendence, the one who will sit perfectly still as the water cannon gush, banks and hotels go dark, shops shut, the port dies, trains run empty on billion dollar rails, universities go mute, migration flights pack out, patriots are brought in to fill vacant developments and Filipino maids volunteer to go home to Duterte.

And after casting his eye over the Trump and the Brexit, the Voter may convince himself that millions on millions of working class people (a “post truth” figure) mind none of that happening to them and really support CY for sticking it to liberals, students, experts and foreigners. He will be making Hong Kong great again!

No, I’m not exactly sure when the first time of Hong Kong greatness was, either. Probably from late MacLehose to early Wilson, but they were British – so let us speak no more of it.