Hong Kong police used pepper spray Sunday to drive back hundreds of protesters angry at China‘s decision to intervene in a row over whether two pro-independence lawmakers should be barred from the city’s legislature. In chaotic scenes reminiscent of mass pro-democracy protests in 2014, demonstrators charged metal fences set up by police outside China‘s liaison office in the semi-autonomous city. Protesters used umbrellas to shield themselves from the spray as they tried to approach the building, while some threw water and water bottles at police. “We are quite shocked. We just wanted to express our demands at the liaison office,” Cas Wong, a 19-year-old student, told AFP. At least one person was seen taken away by multiple officers before scuffles broke out. Police warned protesters they were involved in an “unlawful assembly” and told them to disperse, as they donned riot gear. Demonstrators later occupied a major intersection near the liaison office, leaving dozens of trams and buses stuck on the road. They again charged police lines in an attempt to approach the building and were pushed back and sprayed by helmeted officers. The protest began with a peaceful city centre march in the afternoon. Organisers said 13,000 people took part in that, while 4,000 people rallied outside the liaison office. Police estimates were not immediately available. Hong Kong’s pro-Beijing government is trying to bar newly appointed pro-independence legislators Baggio Leung and Yau Wai-ching from taking their seats in the Legislative Council (Legco) after they deliberately misread their oaths of office last month. As fears grow that Beijing — to whom any independence talk is treasonous — is tightening its grip on the city, China has announced that its parliament will interpret Hong Kong’s constitution, which states that council members must swear allegiance to the “Hong Kong Special Administrative Region of the People’s Republic of China“.

The decision of the National People’s Congress Standing Committee is expected to be announced on Monday.

China is reviewing the issue even though a Hong Kong court is also considering the matter, a move which local lawyers say erodes the independence of the city’s judiciary.

Hong Kong was handed over by Britain to China in 1997 under a “one country, two systems” deal which guaranteed its rights and freedoms for 50 years. There are deep concerns those liberties, enshrined in the city’s constitution known as the Basic Law, are under threat.

“Hong Kong has its own legal system, it should not be controlled by Chinese authorities,” Alex Wong told AFP.

“We must tell the government we are not happy,” the 35-year-old office clerk said. 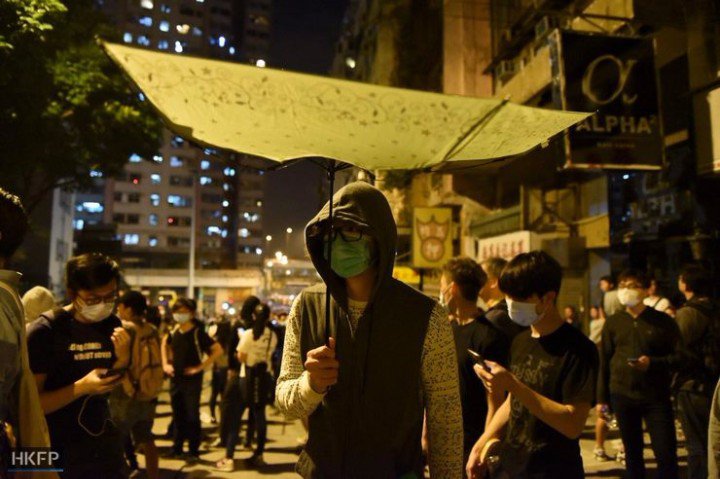 Monday’s expected announcement will mark the fifth time since the handover that China has interpreted Hong Kong’s constitution.

The lawmakers at the heart of the controversy have previously said the interpretation would deal a “lethal blow” to the city. The pair have yet to be sworn into Legco, after their first oath attempt last month was declared invalid. They draped themselves in banners reading “Hong Kong is not China” and altered the wording of their pledges to include derogatory terms and expletives.