In an interpretation of Hong Kong’s Basic Law issued on Monday, China’s National People’s Congress ruled that two lawmakers who failed to properly deliver their oaths of office last month would be barred from serving in the local legislature. The announcement came just hours after a large-scale protest massed outside the Liaison Office of China’s central government.

Li Fei, who chairs the NPC body tasked with interpreting Hong Kong’s Basic Law, said during a Monday press conference that the central government would “strike and legally restrain the forces of Hong Kong independence… applying a firm hand and resolutely preserving the core interests of the country and basic interests of the Hong Kong Special Administrative Region.” Employing hardline language used by Xi Jinping back in 2013 to talk about the need for propaganda leaders to aggressively control the media, Global Times Online said that the NPC had “shown its sword,” making clear what sort of fate awaited any push for “Hong Kong independence,” or gangdu (港獨).

“Hong Kong independence” is naturally a very sensitive phrase in the Chinese media, dealing as it does with one of the most ultra-sensitive areas, that of territorial sovereignty and integrity, and national unity — that dark box that contains such nagging issues as Tibet, Xinjiang and Taiwan.

So, I wondered, how has the phrase “Hong Kong independence” fared in the People’s Daily, the official mouthpiece of the Chinese Communist Party? As it turns out, the phrase has fared very well over the past two years in historical terms, getting far more stage time than ever before.

“Hong Kong independence” has appeared in a grand total of 14 articles over the entire history of the People’s Daily, going back to 1946. Of that total, all but one appear after October 2014 and the events of Occupy Central that year.

In fact, 11 of the 14 articles appear this year, and 7 of them (half the total) since September this year.

Three articles include “Hong Kong independence” in the headline, and two of these appear in the past week, a sign of how much the issue is being prioritised in a relative sense.

The first article to mention the phrase appeared on February 22, 2004, in the midst of appeals from Beijing, and in many local pro-Beijing newspapers in the SAR, for greater patriotism in Hong Kong. The relevant phrase comes in a passage talking about an editorial run in the Oriental Daily that lays out “three standards” for patriotism:

A true patriot should have a very clear definition of loving their country, and they won’t veer right or left on the question. In fact, those people who talk about seeking democracy and freedom, but who actually set out to bring about “Hong Kong independence,” must ask themselves if they could face the fiery test of these three standards.

The next appearance of the phrase comes on October 19, 2014, as the Occupy Central movement is in full swing in Hong Kong and there is talk back and forth about a possible meeting between members of the Hong Kong government and student leaders. “Hong Kong independence” appears in the headline — “From ‘Autonomy’, Seeing the Conspiracy of ‘Hong Kong Independence’ Behind ‘Occupy Central’” — and eight times in the body. Here is one short passage in which the phrase appears twice:

The vast majority of ordinary students and city residents know nothing about the plot of “Hong Kong independence” of those controlling the organisers behind the scenes, and they do not take part in these illegal activities harbouring opposition to the central government. But since the day that “Occupy Central” was plotted, the organisers and their behind-the-scenes operators have harboured a scheme of “Hong Kong independence” they cannot reveal, and they have held aloft the signboards of “democracy,” “autonomy,” and “self-determination” to drive unknowing students and city residents to the front lines.

The next appearance of the phrase came on March 17, 2015, the only article to appear that year. It came in the midst of the controversy in Hong Kong over cross-border traders, and contained this passage, actually about opposition to independence:

On the 15th, many social groups in Hong Kong organised a march “against Hong Kong independence and again separatism” in Tsim Sha Tsui, opposing the radical demonstrations against cross-border traders, and various sides of Hong Kong society have all spoken out to condemn them.

Eleven articles follow, all of them appearing since February this year — five in the past week. 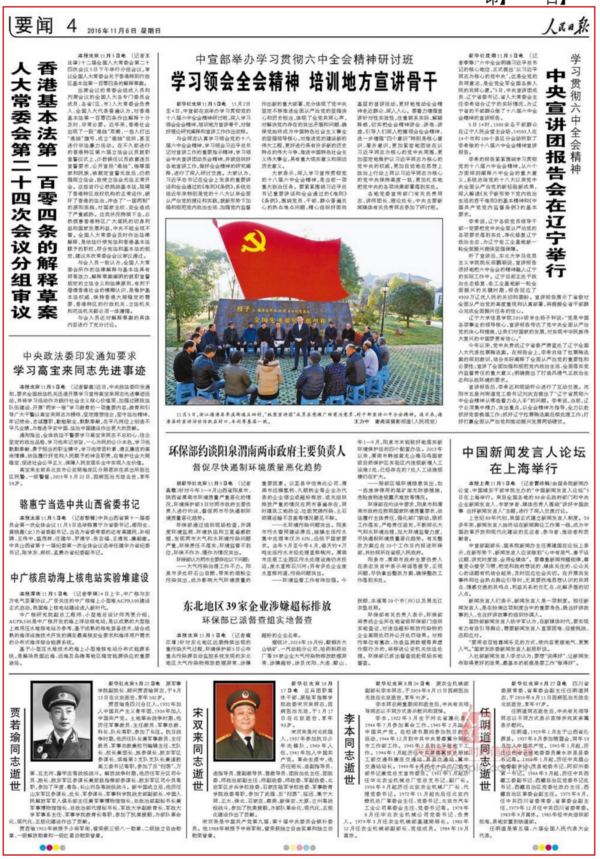 Here is a passage from the latest article, appearing in Sunday’s edition of the People’s Daily, on page four:

The legal interpretation this time is to ensure that the Basic Law is fully and accurately implemented in the Hong Kong SAR, and this has great significance for protecting rule of law and order in Hong Kong. According to the Constitution and Basic Law, the Standing Committee of the National People’s Congress can exercise this power at any time it deems necessary. At present there is some controversy in Hong Kong over the understanding on the regulation concerning oaths [of office], and the normal operation of the Legislative Council has suffered major interruption due to the recent “Oath-gate.” The core of the question is that no person who [promotes] division of the country, and promotes “Hong Kong independence,” in direct violation of the Constitution, Basic Law and relevant laws in Hong Kong, is qualified to take part in elections or serve in a public position stipulated in the Basic Law.

Given the NPC’s decision on Monday, we can suppose that the Party’s leadership’s firm position on the issue of “Hong Kong independence” will continue in the pages of the People’s Daily on Tuesday, and for some time to come.