Sunday’s rally saw thousands of people march from Wan Chai to Central in protest of Beijing’s decision to interpret Hong Kong’s mini-constitution, the Basic Law. Demonstrators shared their thoughts and sentiments with HKFP. 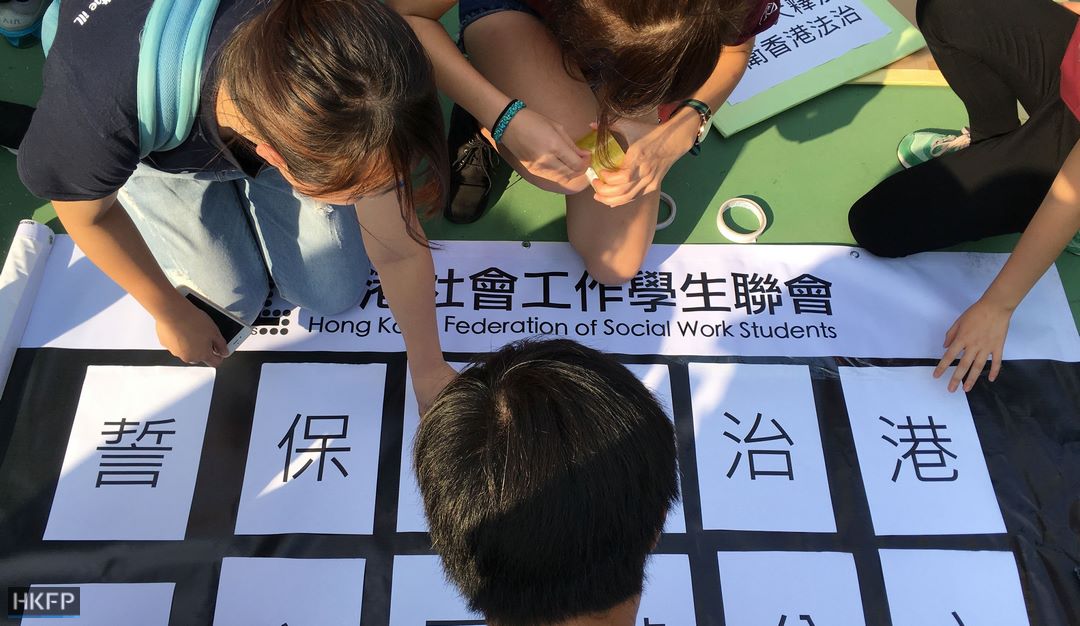 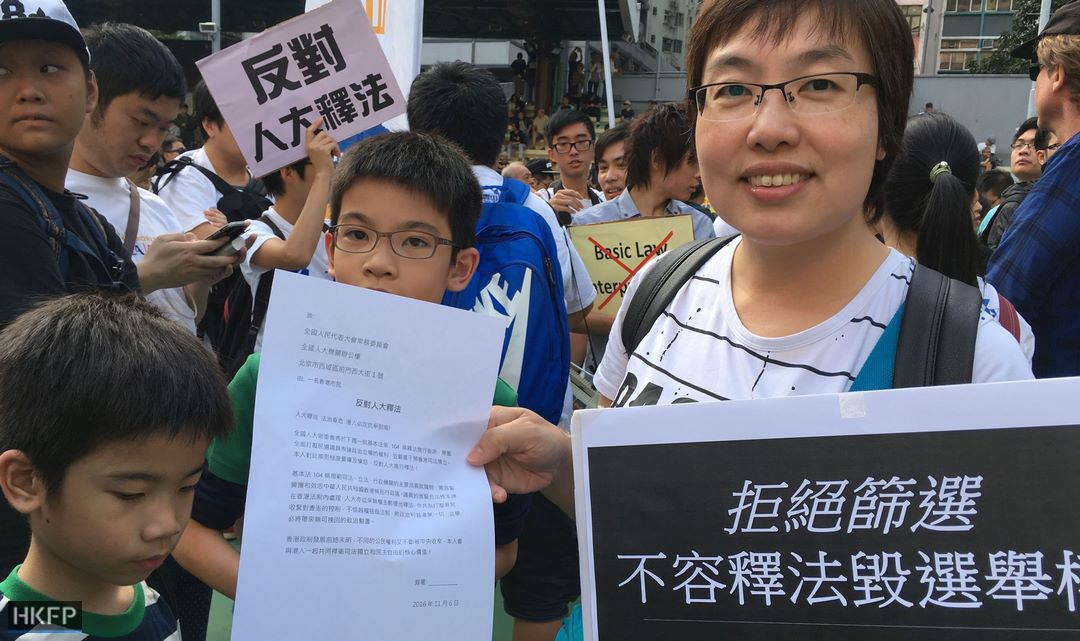 “I wanted to bring my kids to the protest and support my husband. We are both members of the Hong Kong Social Workers General Union. I used to be a social worker myself. Today, I’m here with my kids at this protest because I want to use it as a means to express our demands. If we don’t take this step forward, I’m worried that we will lose all kinds of freedoms… our core values here in Hong Kong.” 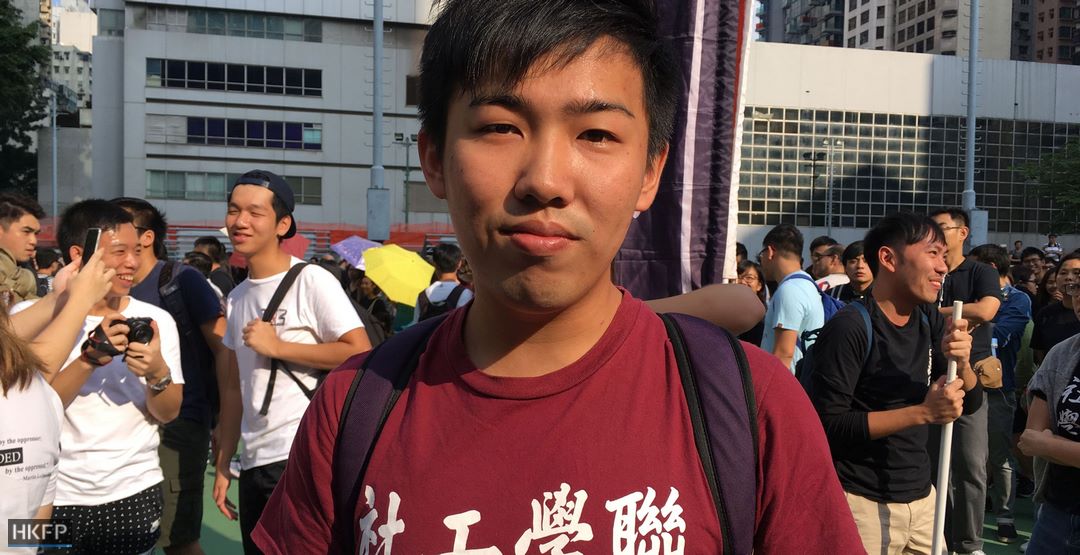 “The purpose of us being here today is to let the National People’s Congress know that we reject their interpretation of our Basic Law. We want the Hong Kong government to understand that we need to protect our judicial independence, we don’t want to allow Chinese interference in our affairs.”
“On Wednesday night we also participated in the protest. Next, we are creating an online forum to encourage people to reject Beijing’s interpretation of the Basic Law… We are very angry but we won’t give up hope.”

“I’ve been participating in protests and demonstrations more and more as years go by. This time, I’m afraid that Hong Kong will lose its judicial independence… But I won’t emigrate, no matter what happens, I will stay in Hong Kong.”

“I want to let the Communist Party know that they can’t simply interpret our Basic Law. By doing so, it is not so far from actively meddling in Hong Kong politics. Even though they will present the interpretation tomorrow, we still have to step forward to deter them from doing so in the future.”

“I feel that things will escalate even more next week. A lot of my friends are tired of protesting and I can understand them. Like today, even though we can’t stop them from interpreting the Basic Law, at least they will think twice before making the same decision again in the future… Are we experiencing a constitutional crisis? Maybe. The timing is off, the procedure is wrong. I feel that this whole affair is just China intervening in our own politics.”

“Every time they interpret our Basic Law, they infringe on our judicial independence and [the constitutional principle of] One Country Two Systems. But this particular case is especially horrible. In the previous four cases, the NPC at least waited until we had a ruling in our own courts, then they would interpret the law. But now, they’ve skipped it. Thus, this sets a very bad precedent.”

“We will definitely attend the lawyers’ protest next Tuesday… There is no reason for their action. They use excuses like we want to counter Hong Kong independence. But if they start doing this, they can do anything they want in the future.”

“Article 104, Article 23, [or] the right to freedom of speech? Oh, I [the NPC] will interpret. Which is why this case sets an extremely bad precedent. If they do this, there is simply no One Country Two Systems. It is dangerous and it is sending a message to the international community that this principle does not work.” 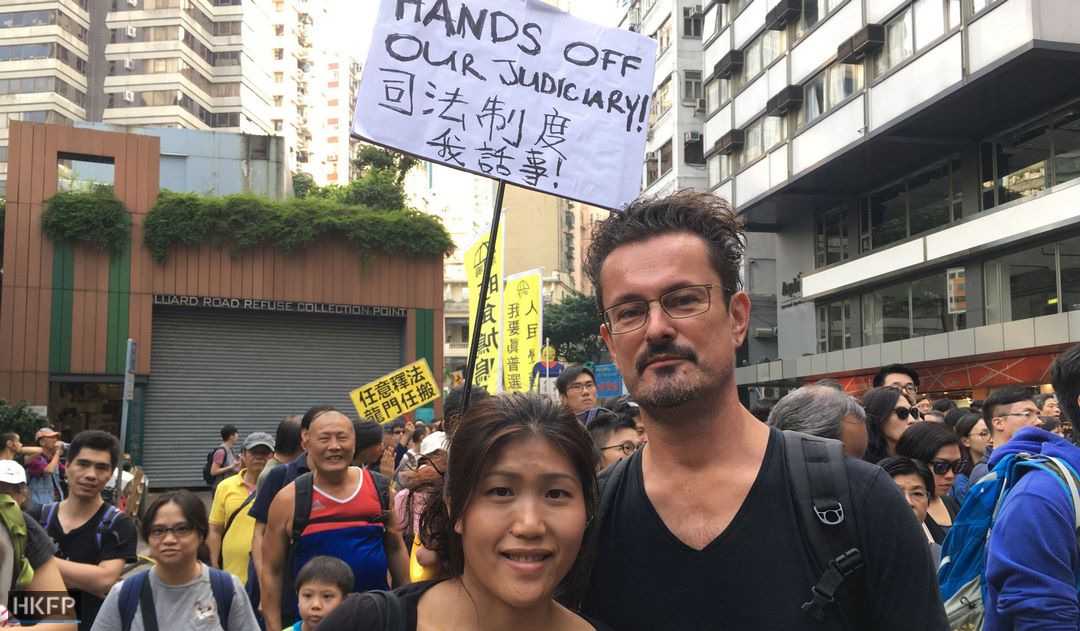 “I don’t know if this protest will achieve anything, to be honest. It’s very hard to take on something like the Communist Party because it’s huge and it’s got its tentacles absolutely everywhere. But this is a very new, serious development. Because what they’ve done is that, right up front, very loud and clear, very explicitly, there is no more One Country Two Systems. They’ve invaded our judicial independence. It is the end of the last 19 years of pretending we are not a part of China.”

“I don’t think anybody in Hong Kong wants to be ruled by the Communist Party. To me, this is not really about Baggio Leung or Yau Wai-ching. This is about something way bigger than the oath controversy. This is about a complete abuse of process, it is essentially undermining the constitution that we have.”

“I think the lawmakers were a little bit silly in what they did but they did not deserve to be kicked out of the legislature. They were elected. People who were elected sit in legislature, that’s what they do, but now they are being denied that right… I didn’t sign up for this. I signed up to live in Hong Kong, not China” 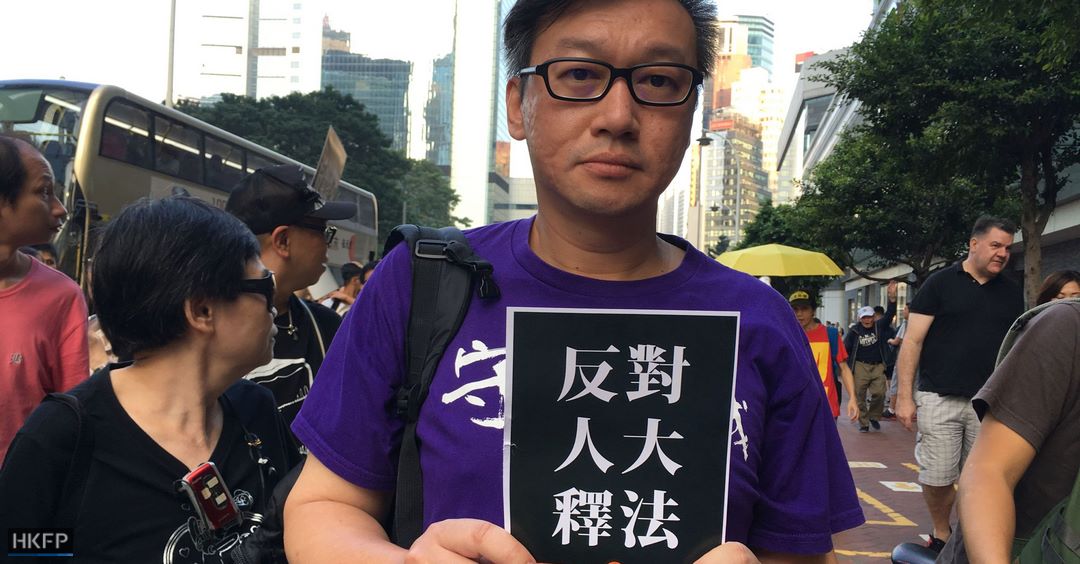 “We formed after the Umbrella Movement, as a group of Christians. We respect Hong Kong’s rule of law and the independence of the judiciary… As we all know, this whole affair began with the oath-taking row. It should’ve been taken care of in Legco, without getting the judiciary involved.”

“It might change the whole structure of our legislature. But no matter what is the result of the ruling, we as Hong Kongers, have the civic responsibility to protect our rights. Of course, you need to consider the situations of many families… If they have kids, they will also ask questions like, ‘What is the future for Hong Kong? How should we educate our children? In what kind of an environment will they grow up in?’”

“As Hong Kong citizens, we have the civic duty to express our demands. The first time I joined a demonstration was in 1989… the next time I joined a major protest was in 2003 against [security law] Article 23.”

“The plan of One Country Two Systems is not to have any major changes in our way of life within the next 50 years after handover… but I think there are certain actions that hinder the healthy development of Hong Kong’s reunification with China. These actions sometime are heavy-handed and just like teaching your own son, you can’t just slap him every time he does something wrong. He will harbour resentment.”

“Realistically, if I have money, I will emigrate. But basically, the wealth gap is too big here… so I don’t oppose going to protest as everybody has his or her own way to express their own frustration.”