A sex doll featuring localist lawmaker Yau Wai-ching’s face is the latest in a notable trend of sexualising the youngest female politician in the legislature.

Pro-Beijing protesters carried the doll at with a picture of the 25-year-old lawmaker’s face taped to it at the protest outside the Legislative Council on Wednesday. That day, thousands of protesters called for Yau and fellow Youngspiration politician Baggio Leung to be blocked from entering LegCo, chanting that they had insulted Chinese people with their changes to the oath and that they were unqualified to be lawmakers. The doll was spotted by Twitter user Hong Kong Hermit, who said that it had “anatomically correct chewable nipples.” When he asked the group questions about the doll, the protesters avoided answering and one told him to go home.

When asked about the effigy in an interview, Yau’s attitude was that she does not care.

“There was [an effigy] of Baggio Leung, too, even though it wasn’t a sex doll,” she said. “It was quite creative… It would be better if they use such creativity for other things.”

Yau told HKFP that she did not want to be limited by labels of gender. She said people who don’t agree with you will attack you anyway, regardless of gender, which is why she chooses not to draw attention to her gender as a reason for the attacks.

I asked for a comment, but apparently they didn’t have a designated sex-doll-protest spokesperson. pic.twitter.com/eTZZyn4RM6

See also: Interview: Lawmaker Yau Wai-ching has no regrets, but hopes to escape oath row and work for Hongkongers

But a gender and family issues expert said that the attacks are not so much related to Yau’s political stance, but as part of a broader history that objectifies women.

Suzanne Choi Yuk-ping, a professor at the Chinese University of Hong Kong, told HKFP that the tendency to sexualise or feminise female politicians and focus on their bodies is a way to patronise them.

“I think this is a universal phenomenon that is related to gender stereotypes about women” – academic Suzanne Choi.

Men may be uncomfortable with having a woman in a public role, especially a young woman, she said.

Previous examples of female politicians receiving sexist comments include Emily Lau, who made good on her promise to wear a dress with spaghetti straps after she retired as a politician. Although media coverage focused on the positive response from passersby, comments on social media criticised her for wearing the dress at her age and for “having a negative impact on the aesthetics of the city.” As Quartz previously reported, Yau has attracted more vicious online attacks – often with sexual overtones – than her party colleague Baggio Leung. One Facebook comment compared her to Jiang Qing, Empress Wu Zetian and Empress Dowager Cixi – women who are often remembered unfavourably and for attaining power through sexual attraction. Other commenters have said Yau was elected for her looks, implied she was a prostitute, and have asked to have sex with her.

Yau is also affectionately known to her supporters as “Yau BB [baby]” or “goddess” for her attractive looks.

These kinds of comments perpetuate the stereotype that women should continue to be defined by their appearance, said Choi. She added that the issue is complicated by the fact that Yau does not publicly speak out against sexualised comments and appears in interviews “in a way that is normative to gender ideals or feminine ideals,” giving the impression that she is capitalising on her appearance.

A popular gif made from a scene in a TV show that Yau appeared in before she entered the LegCo race.

A controversy over Yau’s use of a crude word when discussing living space also shows that focusing on gender can also be used to draw attention away from what women are saying. Comments attacking Yau increased after she said at a public forum that young people could not afford space to have sex, using a Cantonese slang term that roughly translates to “to bang.” 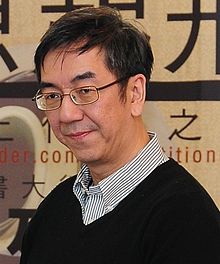 Public commentator Chip Tsao said at the time that even though he agreed with her point, a woman should not use such language.

“Firstly, girls should not open their mouths to say ‘to bang.’ Even lesbians or tomboys should not say it,” he said.

Choi said the media in Hong Kong tend to amplify sexist comments because it sells papers, and that discussing female politicians in this way is discouraging to a younger generation of young women who may want to participate in politics.

“If we want more women in politics, we really need to address the issue of female politicians who are being sexualised and objectified,” said Choi.