As China marks 80 years since the Red Army ended its epic Long March, the Communist Party is attacking revisionist history in an effort to compel reverence for its founding legend.

Facing annihilation at the hands of Nationalists during China‘s civil war in 1934, some 80,000 Communist soldiers and leaders — Mao Zedong among them — broke through encircling forces and embarked on a gruelling escape. Nine out of 10 had deserted or died by the time the last units reached Yanan in the northern province of Shaanxi as much as two years later, where Mao and his cohorts founded a base from which they went on to take over the country.

According to Communist Party lore the marchers travelled at least 12,500 kilometres (7,750 miles) through some of the country’s most remote and hazardous terrain.

The anniversary is being marked this week, with a daily drumbeat of newspaper articles and op-eds — plus dozens of TV dramas, documentaries, trivia contests, radio broadcasts and special exhibitions — extolling their heroism. President Xi Jinping has put his stamp on the occasion, visiting museums in the northern region of Ningxia and Beijing.

Xi has declared the party must emulate the march’s spirit in pursuit of his “Chinese Dream”, a vaguely defined promise of national rejuvenation, and the party’s centenary goal to build a “moderately prosperous society” by 2021.

“We, the new generation, should accomplish our new Long March,” he said.

The drive comes just ahead of a top party meeting in the capital this month, with speculation mounting that Xi may delay appointing a successor and seek to stay in power beyond the traditional 10-year term.

Evoking the legend is “a good reminder to everybody that the party actually did, and does, stand for something” despite the Communist Party’s loss of “purpose and legitimacy”, Trey McArver, a London-based China politics analyst at Trusted Sources research firm, told AFP.

Xi’s embrace of the Long March reflects his desire to gather the party’s passion around him and channel Mao’s authority, said Liu Tong, historian at Shanghai Jiaotong University.

China‘s governance has become more focused on the leader under Xi, a style that “mimics Mao’s in many respects”, Liu said, adding that celebrating the Long March connects Xi to the “the Communists’ symbol of triumph”.

But much recent propaganda surrounding the march, he added, “departed from the truth”.

In reality the long retreat was a “military disaster” for the Communists, argues University of Hong Kong historian Xu Guoqi.

Rather than Mao’s brilliance, it was Japan’s invasion of China that saved the party by diverting and weakening the Nationalists, he told AFP.

Survivors have spoken of rapes, executions, kidnappings and forced requisitions of grain by the Red Army on the routes it walked.

Two British men who spent more than a year following the Red Army’s route calculated that it was about 6,100 kilometres — far shorter than officially claimed.

Others such as documentary filmmaker Sun Shuyun have interviewed survivors and witnesses who reported that celebrated incidents such as the Battle for Luding Bridge, where Red Army heroes reportedly made a perilous crossing under heavy gunfire, did not occur as described.

Such accounts have been blasted in state media. 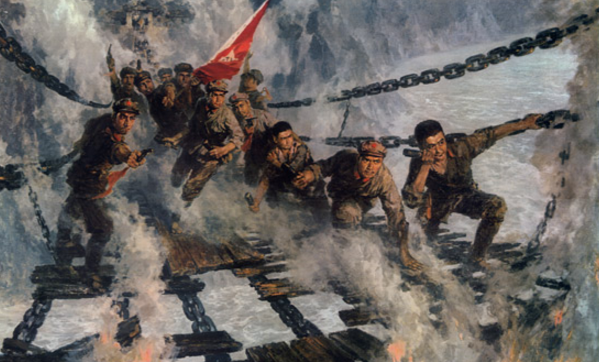 Those who cast doubt on the 12,500-kilometre figure are guilty of “historical nihilism”, wrote Lu Yi, a scholar at the Central Party School, an institution where Communist Party officials are trained, in a commentary in the People’s Liberation Army Daily newspaper last month.

Lu singled out Sun and the British travellers as examples of people who “fly the flag of ‘restoring the truth’ to maliciously sever history and fabricate lies”.

The widely circulated commentary ended with a warning that “this historical nihilism must be firmly refuted”.

Warren Sun of Monash University in Australia told AFP that while Xi understands the “less-than-savoury real story” of the march, in “issuing the new marching order, political necessity clearly overrides any historical truth”.

Although Mao’s own units reached Yanan in 1935, China celebrates the reunification of Communist forces on October 22 the following year, and the 80th anniversary is being marked with museum exhibitions across the country.

At the National Museum on Tiananmen Square, visitors gazed at oil paintings of Mao astride a white steed and displays of the Great Helmsman’s handgun.

An elderly visitor named Shan said he admired the early Communist Party members, whose achievements “represent the indomitable spirit and strong mind of the Chinese nation”.

But several younger visitors said their state-run companies had bussed them in for the exhibit and required them to write a report about it.

One group of visitors posed with a Communist Party flag at the entrance.

Asked if she considered whether the official history was distorted, a 30-year-old woman surnamed Feng answered: “History is never objective. As ordinary people, we cannot tell whether history is true. But we can still learn from the spirit of the Long March.”