Hong Kong, a city which was first made world famous by its cinema, doesn’t have very many post-World War II theatres left, and now the oldest one on Hong Kong Island is on the chopping block. The State Theatre, which opened in 1952, is likely to give way to another business tower development project as the government’s Antiquities and Monuments Office proposed in April 2016 to give the lowest grade to the historic building, which is literally a green light to its demolition. An infographic on the historical, cultural and architectural value of the State Theatre. Photo: Supporthk.org

The State Theatre was founded by Harry Odell, Hong Kong’s first impresario who started the film business in Hong Kong, persuaded famous performers to visit and successfully lobbied the government to support cultural development, namely the construction of the City Hall theatre complex in 1960s.

Odell’s personal project, the State Theatre, was thus designed as a cultural landmark for grand theatrical and musical performances. At the time, it featured local and foreign works ranging from western dramas, Mandarin Pop concerts and Cantonese opera to popular Mandarin and Cantonese films. The theatre bore witness to the rise of cinema in Hong Kong in the post-WWII era, and saw the development of Hong Kong people’s cultural identities during its heyday in the 1970s and 1980s. The theatre’s unique roof structure, with parabolic concrete roof trusses, has been highly praised by architectural conservation groups as a leading example of Modern Movement architecture.

As the golden era of Hong Kong cinema came to an end in the late 1990s, the theatre ceased to operate in 1997 and was converted into a shopping mall and snooker club in 2000. But both the external and internal structure remain intact. In a joint statement, local conservation groups stresses:

The spectacular roof structure of the former State Theatre towers over King’s Road like a giant public art installation. A highly-distinctive icon in Hong Kong’s cityscape, it captures the buoyancy of a past era, and there is no reason why it cannot belong to the future too. Indisputably an architectural gem both locally and worldwide, if this forgotten post-war wonder can be imaginatively transformed, it surely has the potential to develop into a tourism highlight and a cultural landmark that Hong Kong people can be proud of. Any self-respecting city should know where its soft power lies.

However, in April a five-member panel in the Antiquities and Monuments Office proposed to rank the building as third grade simply based on its age. Such a ranking is the lowest in the classification system, which clears the way for demolition if preservation is not practicable. Local media have reported that the old apartment buildings surrounding the theatre had been bought up by a local developer, who aims to redevelop the area into a residential and business district; the State Theatre will be rebuilt into two business towers, according to the development plan. 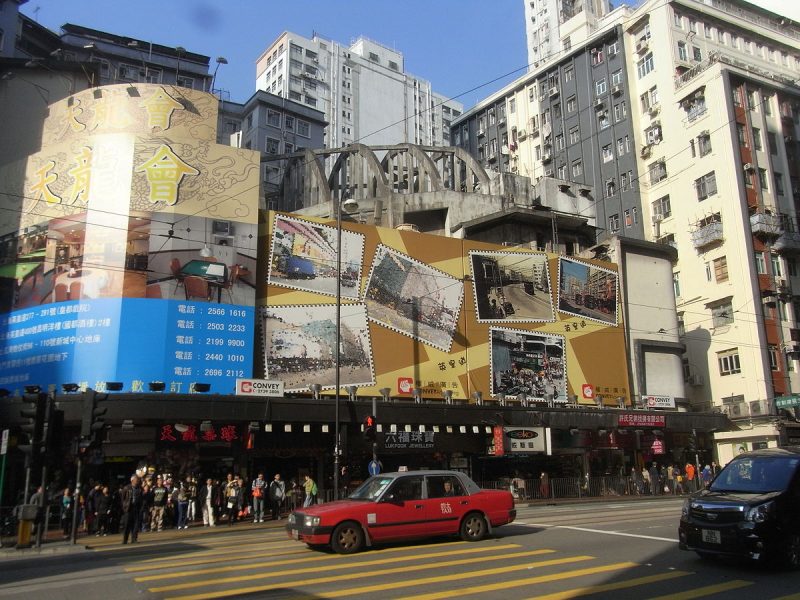 State Theatre Building along King’s Road in 2013. While a billboard is concealing most of the facade, the special features of the roof are visible. Photo: Wikicommons.

A petition has been launched to pressure the government and the Antiquities Advisory Board  to make the State Theatre a grade one historical building in its December meeting. The grade one ranking is assigned to “buildings of outstanding merit, which every effort should be made to preserve if possible.” The petition says:

State Theatre is an internationally unique piece of architecture because of the exposed reinforced concrete roof trusses that soar over the building, which make it an imposing urban landmark. The theatre has retained a good degree of authenticity internally despite its conversion to a snooker club in 2000 – the original internal structure and the former theatre space have all been kept. This precious symbol of the most popular form of post-war mass entertainment recalls the heyday of Hong Kong cinema, and it also serves as a rare reminder of North Point’s “Little Shanghai” in the 1950s and early 1960s. The heritage significance of State Theatre should be duly recognised and protected.

Though the Hong Kong government has vowed to support Hong Kong’s film industry and set up a film development fund to help finance local film productions, it sees Hong Kong cinema as just another business investment rather than a material culture that brings the society together. Throughout the past two decades, many historical landmarks have given way to redevelopment projects. Till now, Hong Kong people still feel sore about the demolition of the pre-WWII Lee Theatre in 1991 to make a commercial plaza.

The current petition campaign is another test on the city’s choice between the pursuit of quick capital returns and the preservation of its cultural and historical heritage.