I spent eight hours today waiting at home for my new fridge to be delivered. My anxiety was compounded by the fact that the Japanese refrigeration unit I had ordered was possibly too big to fit through my front door, up the steps, and shimmy through the slalom course of my kitchen units. I’d measured the gaps a dozen times and even created a cardboard template of the base of the fridge in order to simulate the potential problems of the delivery. It was always going to be tight but my refrigeration greed was driven by my perceived right of entitlement to have cold water, beer, wine and truncheon stiff Linda McCartney sausages at my beck and call 24 hours a day. 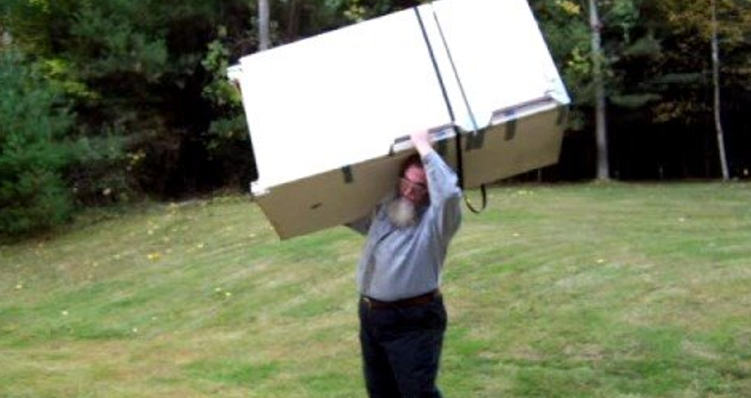 At exactly 5 o’clock, two scantily clad, heavily tattooed fit youths arrived with what looked like a cardboard box containing the Eiffel Tower. Using a piece of string they made their own measurements of the University level spatial awareness problem that was probably their 10th of the day. Refusing all help, I’d had a while to warm up to this task, and with only millimeters to spare they proceeded to metaphorical shove a camel through the eye of a needle. Even the toughest audience in the world – my kids – were hugely impressed by this circus feat of strength and ingenuity and I fell over backwards to grease their palms with some expatriate tip as they removed the 15-year-old retired original.

While I was waiting for the new addition to my first world life, I had plenty of time to surf the news and read that about 1.5 million civilians in Aleppo had just had their water turned off through a combination of Russian bombing and spite. War news fatigue is a term I abhor, as it justifies inaction and makes it easier for those who have the luxury to influence their Government to ignore suffering and direct their minds towards more pressing matters on Facebook. CY Leung probably can’t even place Syria on a map and the Chinese Government are indirectly supporting the war through their support for Iraq. So what do we do living in Hong Kong? It is difficult if not impossible to pressure our Government to do anything, let alone act in the humanitarian interests of the people they are supposed to represent.

At this point may I obtusely engage Morrissey, the pompously contentious and slightly likable desert-booted contemporary of mine who plans to perform in Mong Kok next month. In his defence, he once made the lucid and highly controversial point in the 1980’s, that Band Aid made the Ethiopian Famine the responsibility of “a thirteen year old girl in Wigan” rather than the Thatcher Government.

However, our situation is slightly different and given the reality that our ‘representatives’ have excused themselves from any moral obligation we have only limited options. Save The Children, Medecins San Frontieres, UNHCR, The International Red Cross, The White Helmets… There are a whole host of reputable charities whose volunteers are, as I type, risking their lives to dig children out of bombed out apartment blocks in Syrian cities.

Tomorrow as my refrigeration unit comes up to speed, I will have ice cubes and cold beer. My pathetic response to my own hypocrisy is a cheque in the post and this article. But better this, than doing nothing.

Syria, Hong Kong and the luxurious problem of a refrigerator delivery