Little known to anyone who has lived outside of Yuen Long, Wang Chau is a rustic haven encircled by industrial and residential estates. But it recently grabbed headlines as allegations fired back and forth between villagers, lawmakers, the rural faction and the government over a public housing project set to be built there. 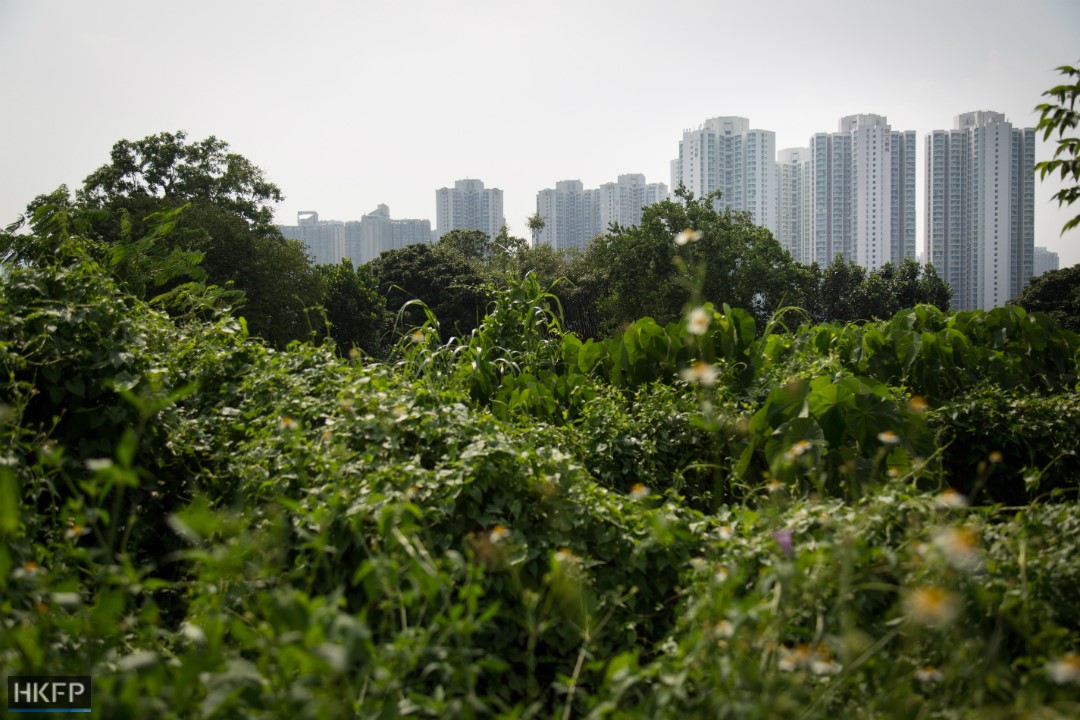 The original plan proposed by the government in 2012 was to build 17,000 units of public housing in Wang Chau on 33 hectares of land. This section of land mostly encompassed a brownfield site currently occupied by a shipping container storage facility, as well as select areas of the Wang Chau greenbelt zone.

However, when the proposal was submitted to Yuen Long district council in 2014 for approval, the development area was reduced to 5.6 hectares of solely greenbelt land in the south, leaving the brownfield untouched. The units of public housing were also dropped to 4,000. 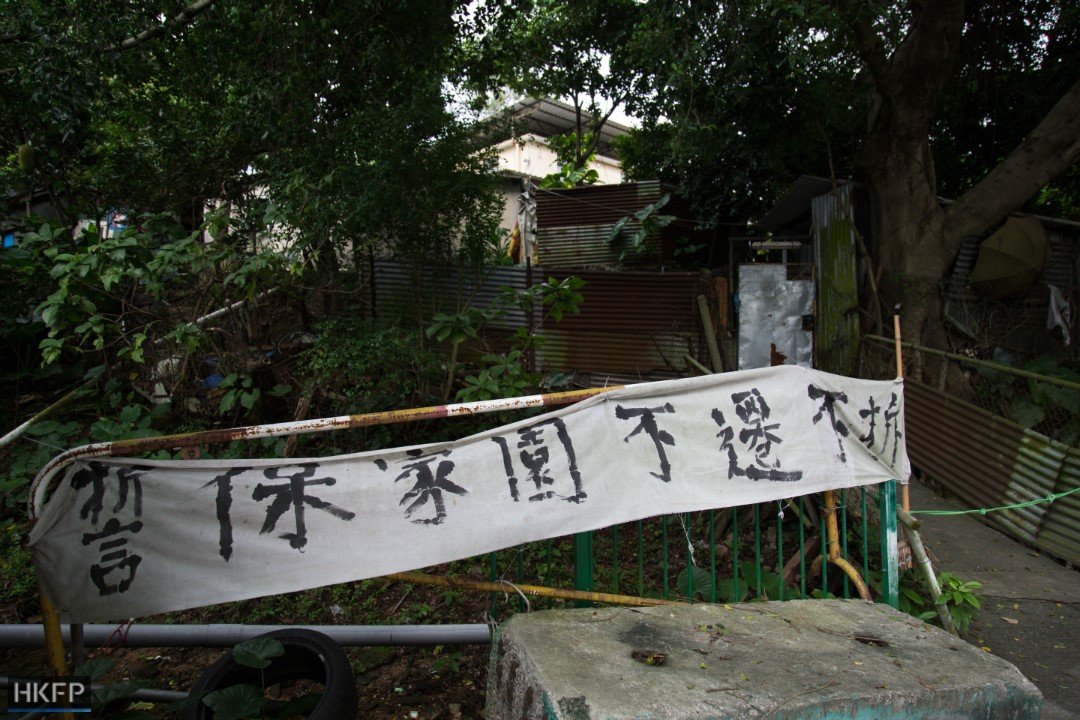 As a result, three villages populated by some 200 non-indigenous villagers – Wing Ning Tsuen, Fung Chi Tsuen, and Yeung Uk Sun Tsuen – may be cleared and possibly flattened, leading to evictions. If the plan goes ahead, villagers would have to leave by January 1, 2018. 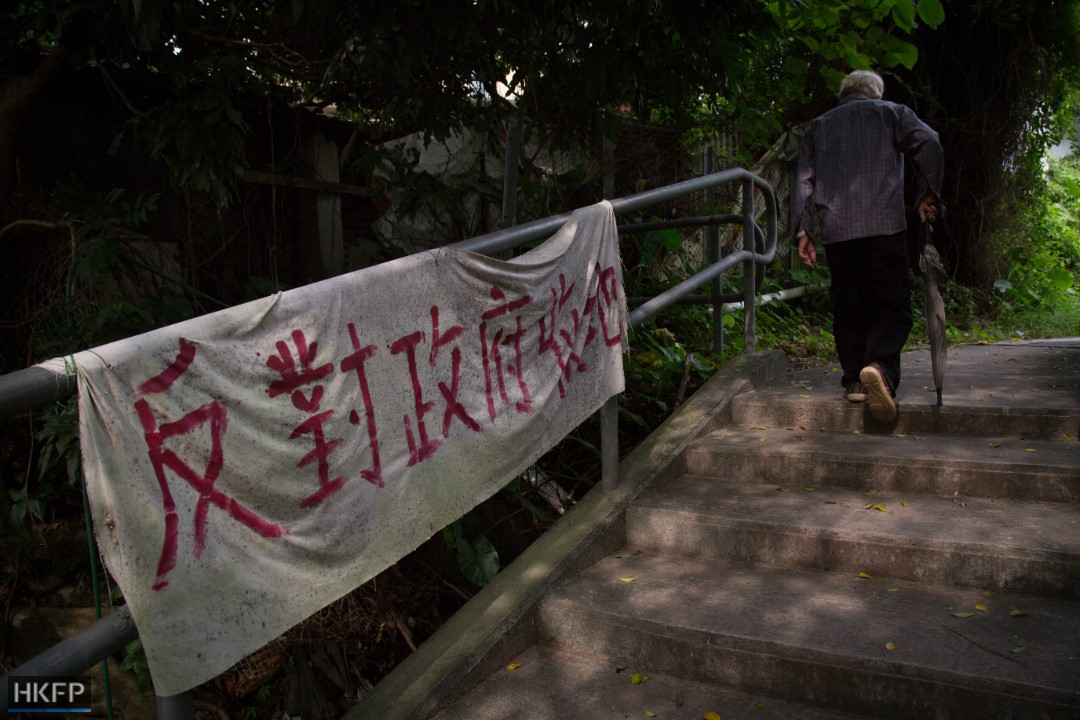 Ms. Ko, a resident of Wing Ning Tsuen, told HKFP that she has lived in the village for over 30 years: “A group of 10 to 20 people stormed into my house” last year, she said, “I do not know who they were, I was at work, only my mother was here at home.” 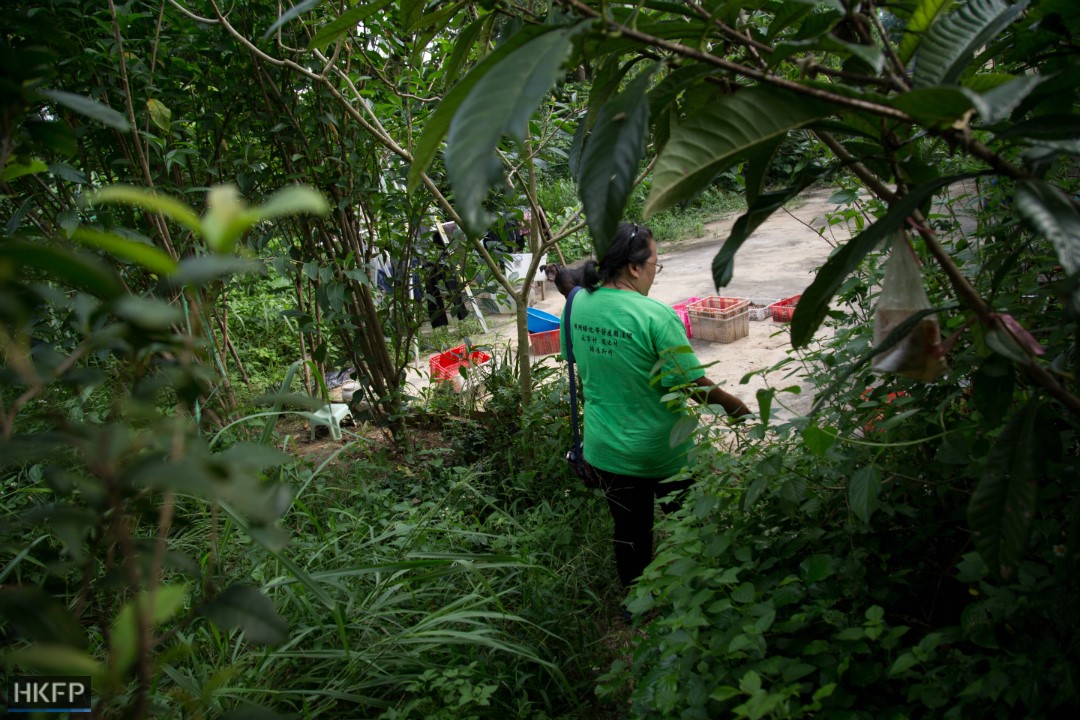 Her mother was around 80 years old at the time. She suffered a stroke after the intruders, who turned out to be from the Lands Department, handed her a notice of eviction. Her mother was paralysed as a result of the stroke, so she resigned as a security guard to take care of her mother full-time. 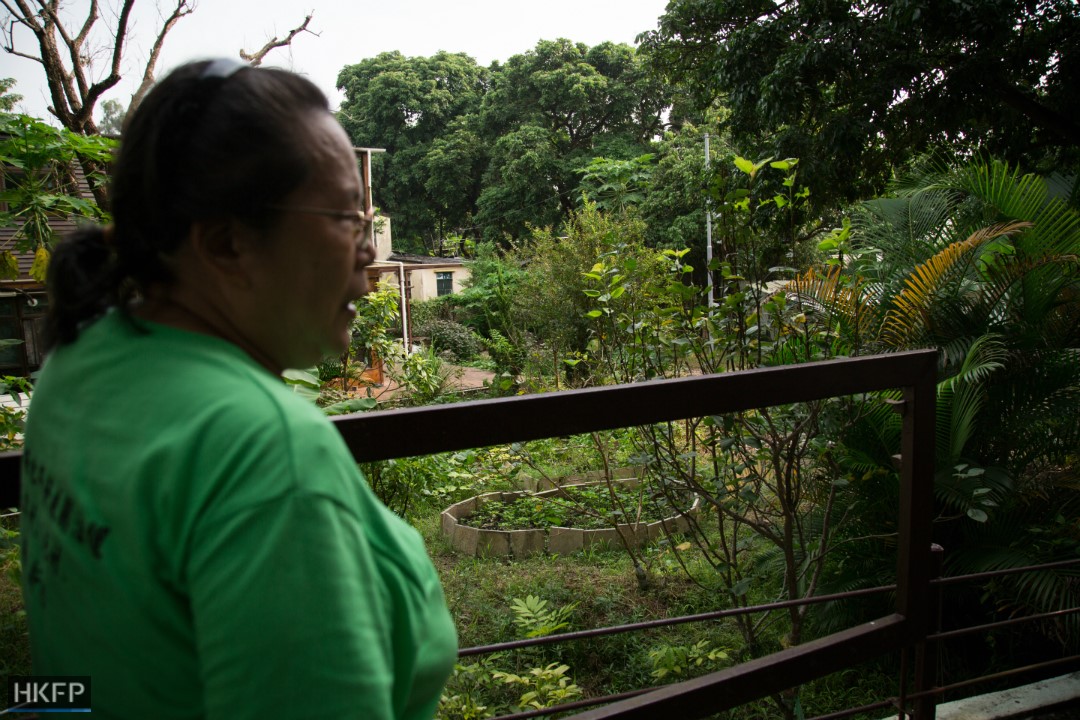 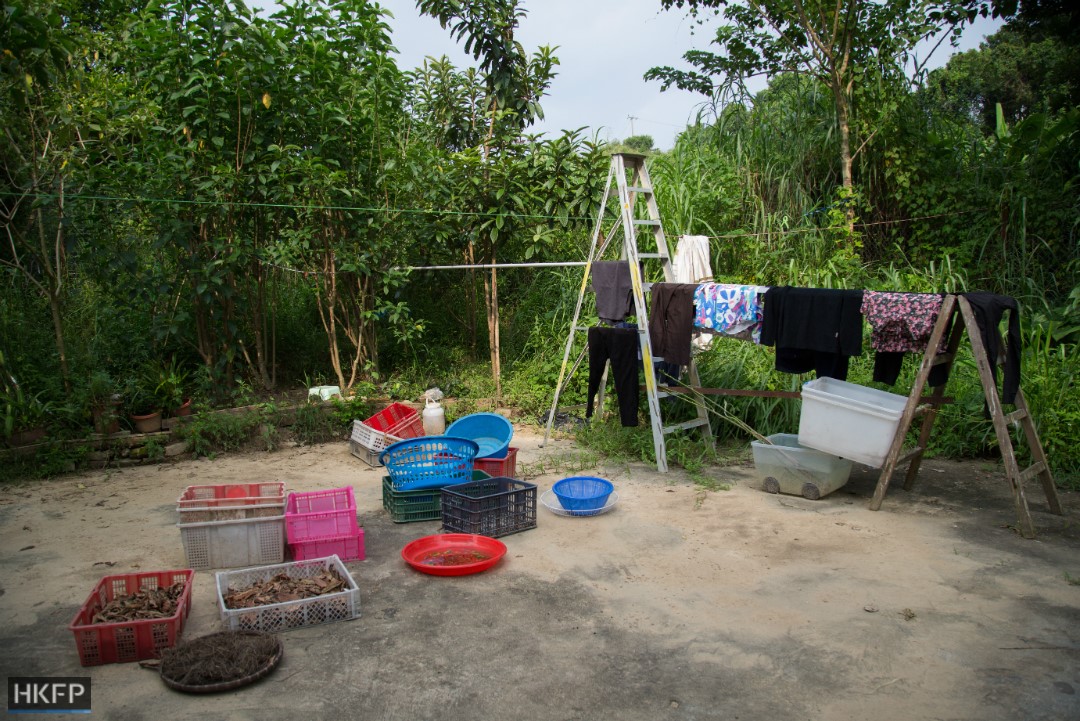 Mr. Chung, a neighbour of Ko’s, built his own house on a piece of land he bought in the village. “It took me over a year to build this house. I even went to Taiwan once to research how to design it,” he said. 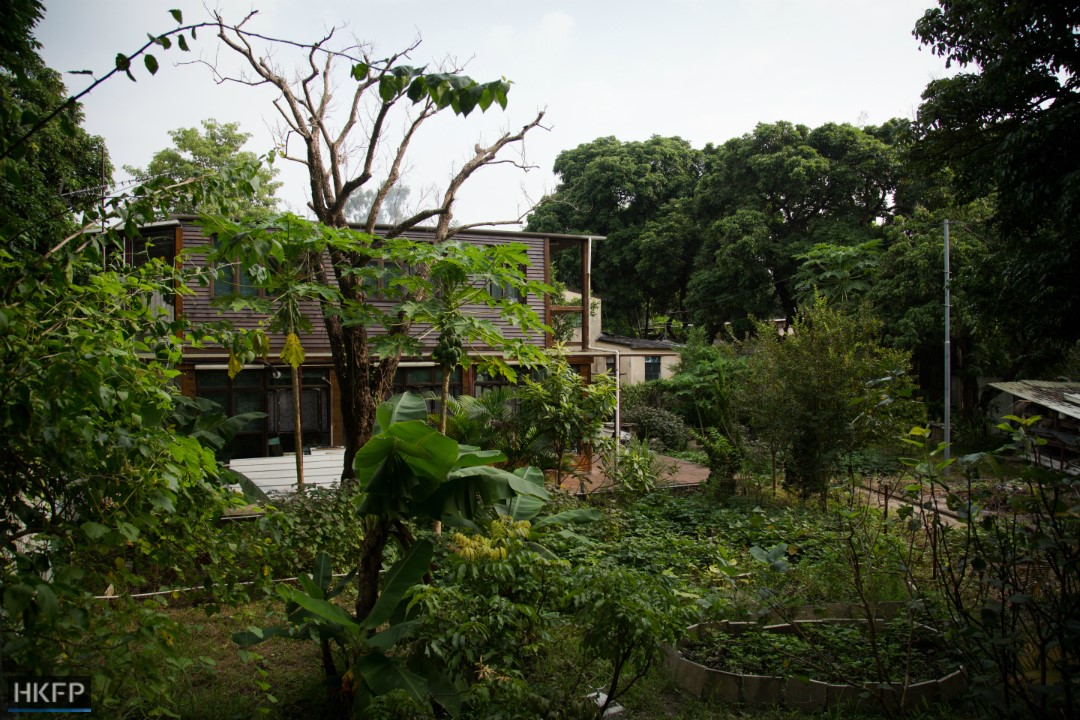 Although his house was completed, he was still working on small additions to the periphery such as an automatic sprinkler. 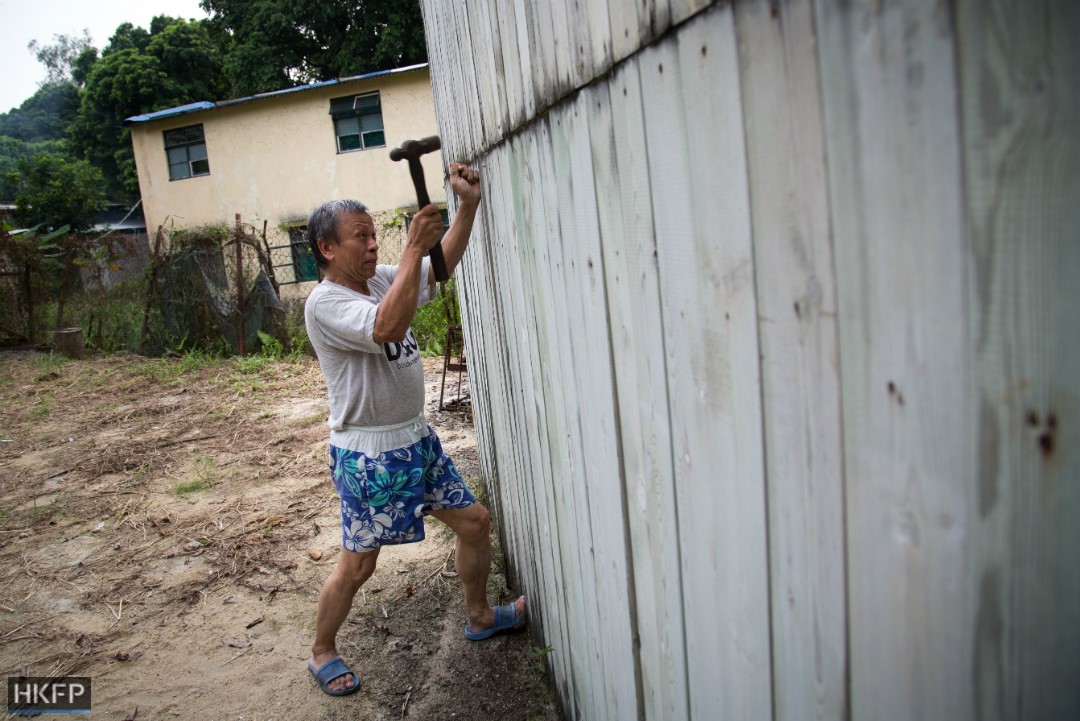 Unfortunately, on the same afternoon he completed the sprinkler, officials from the Lands Department knocked on his door to hand him his eviction notice. “I no longer have the motivation to complete my builds,” Chung said, wary of the impending deadline. 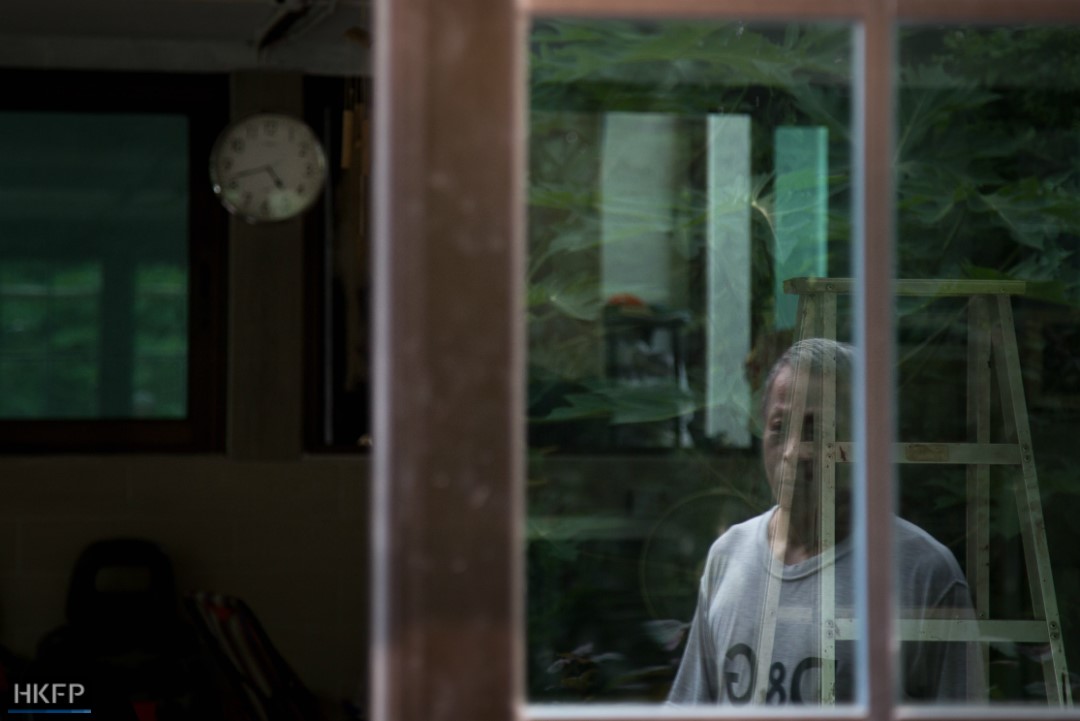 “A reporter from TVB kept asking me how much compensation is enough to make me leave… What compensation can compensate for the time and effort I have spent to design and build my own house?” Chung asked. 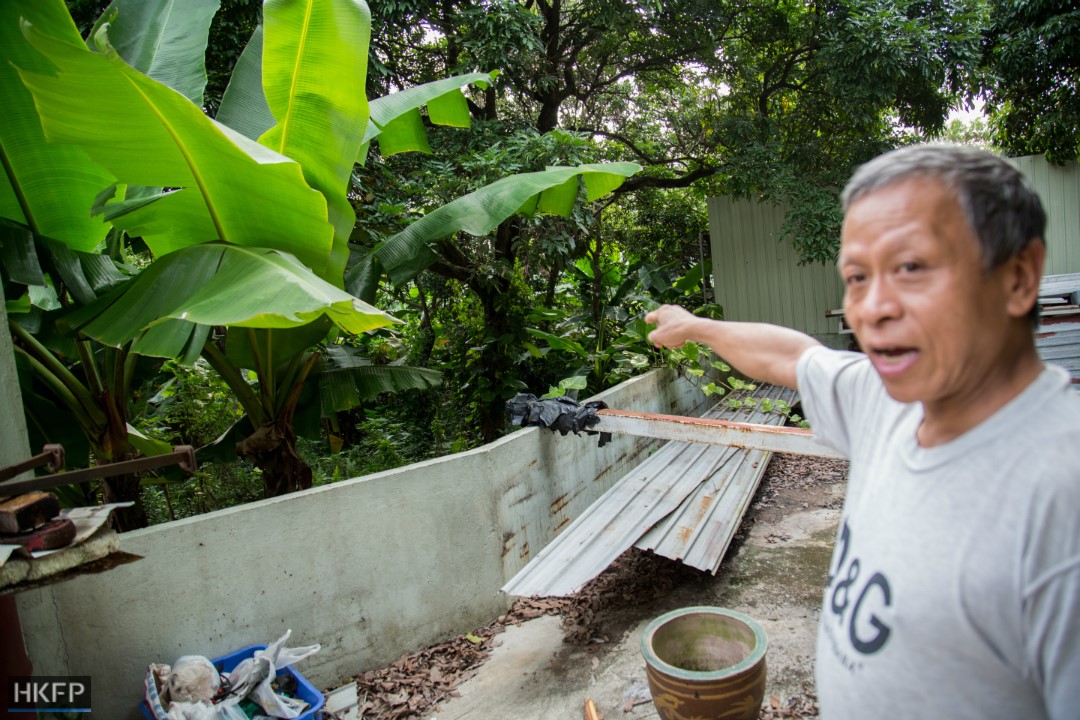 Mr. Chung pointing at the piece of land that may soon become a traffic junction. Photo: Stanley Leung/HKFP.

Mrs. Cheung, a villager from Yeung Uk Sun Tsuen who asked not to be photographed, echoed her neighbour’s frustration. “People think all we want is more compensation,” she said. “How can [the government] do this to us?” she asked. “They have never consulted us [on the development proposal]. They only consulted the rural leaders and representatives.”

Villagers had no say in choosing the rural leaders, nor were they represented. Cheung also questioned why Chief Executive Leung Chun-ying would say that developing the greenbelt before the brownfield would be easier. “Our villages were built along the foot of a hill, whereas the brownfield is already a damaged piece of flat land,” she describes as she pointed towards the shipping container storage site in the distance.

The government stands accused of succumbing to pressure from powerful rural interests, though it has denied any collusion with developers or triads. 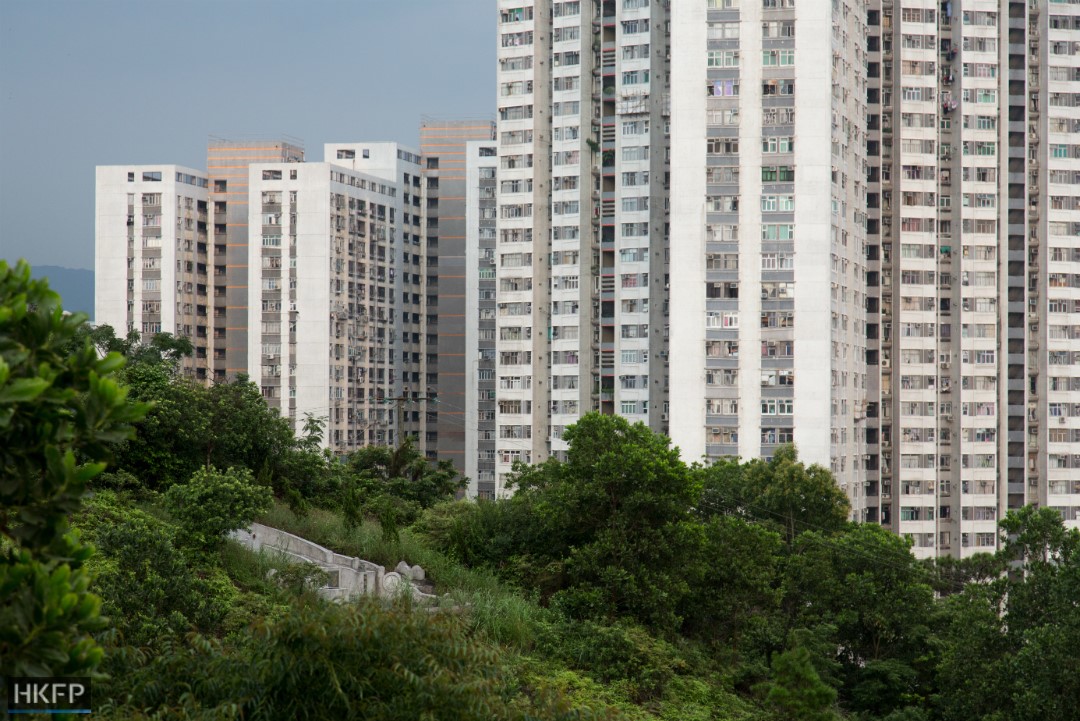 A public housing estate next to Wang Chau, with a grave on the hillside. Photo: Stanley Leung/HKFP.

Mr. Chung added that roads and other infrastructure would then have to be built on the flattened land, whereas at least three roads leading to the brownfield already exist. 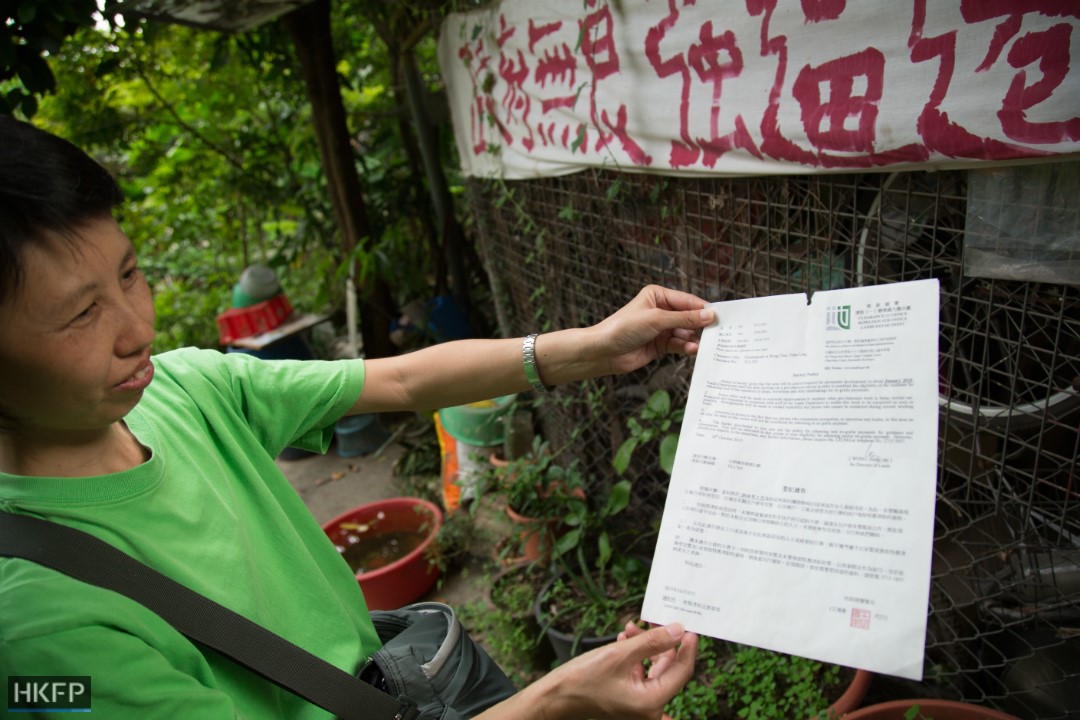 “If you take a closer look [at the terms], the government does not actually have to pay us that much for our losses,” and so the non-indigenous villagers are the easiest ones to evict, Cheung said. “Maybe that was what the government meant by ‘easy’.” 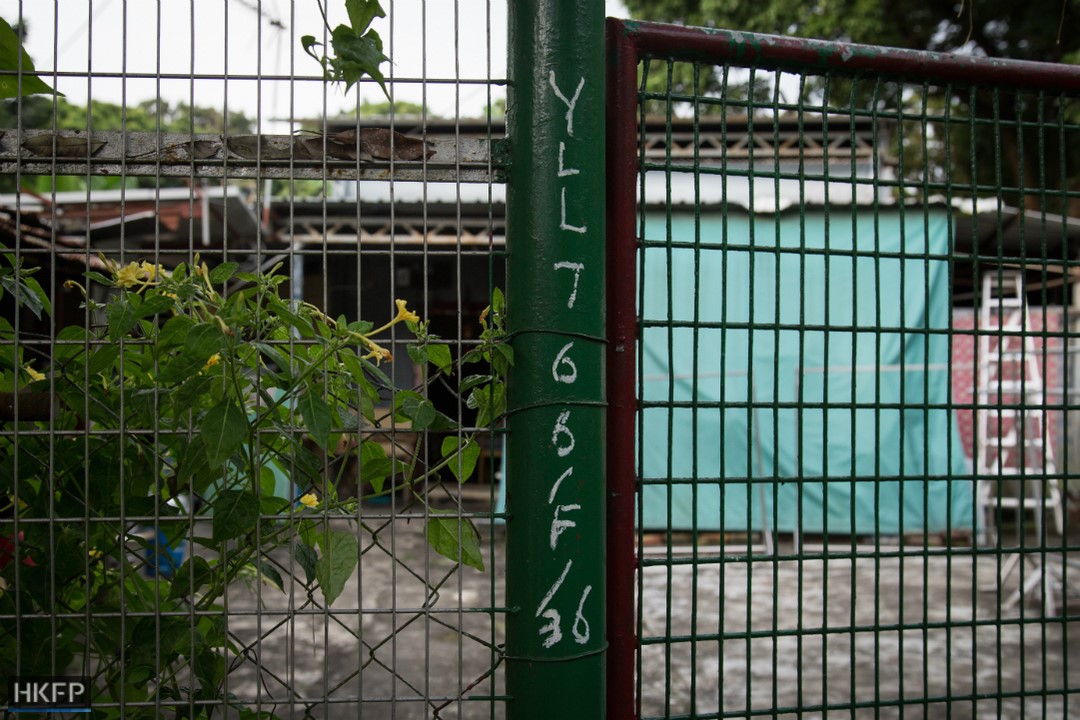 Marking made by the Lands Department outside the home of the mother of Wing Ning Tsuen’s village head. Photo: Stanley Leung/HKFP.

“All we can do now is to make an effort to voice our concerns and discontent against the injustice,” said Mrs Cheung. “The development of Wang Chau was not a recent incident,” she said, “but before the recent elections, no one cared about us, no one knew about us, where Wang Chau is, and what is happening here.” 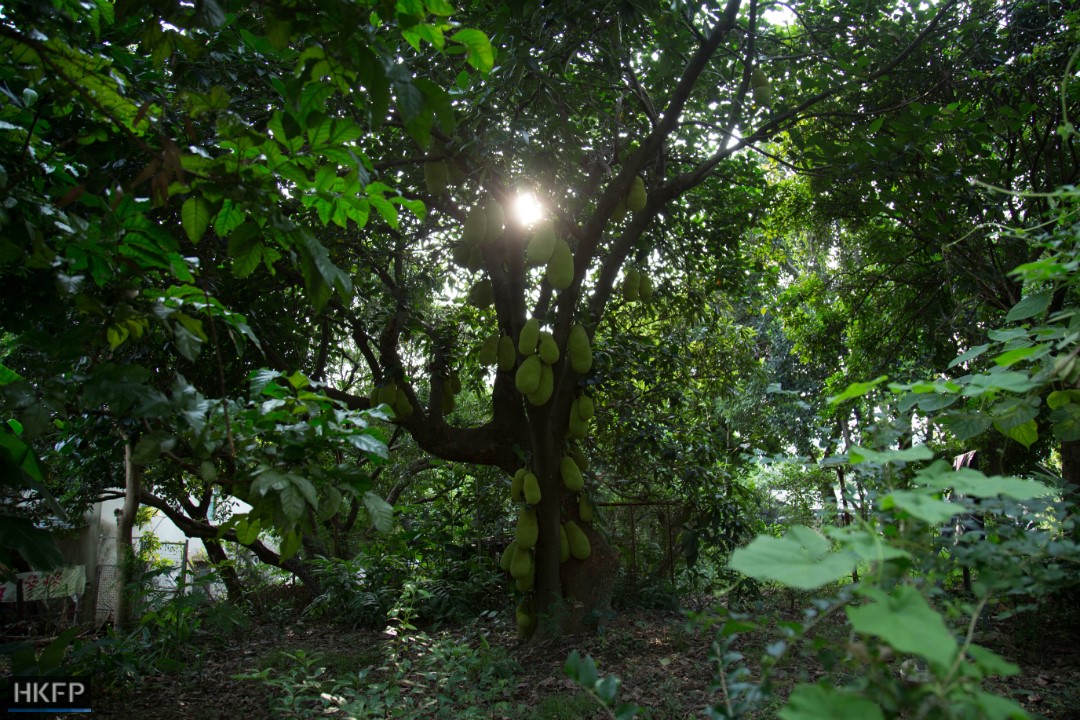 The village rose to prominence as activist Eddie Chu was swept to victory in this month’s legislative elections, promising to take on the rural gentry. Chu gained more votes from the public than any other candidate, but has already received death threats.

Now, the villagers hope that more people will visit Wang Chau to witness their fight. 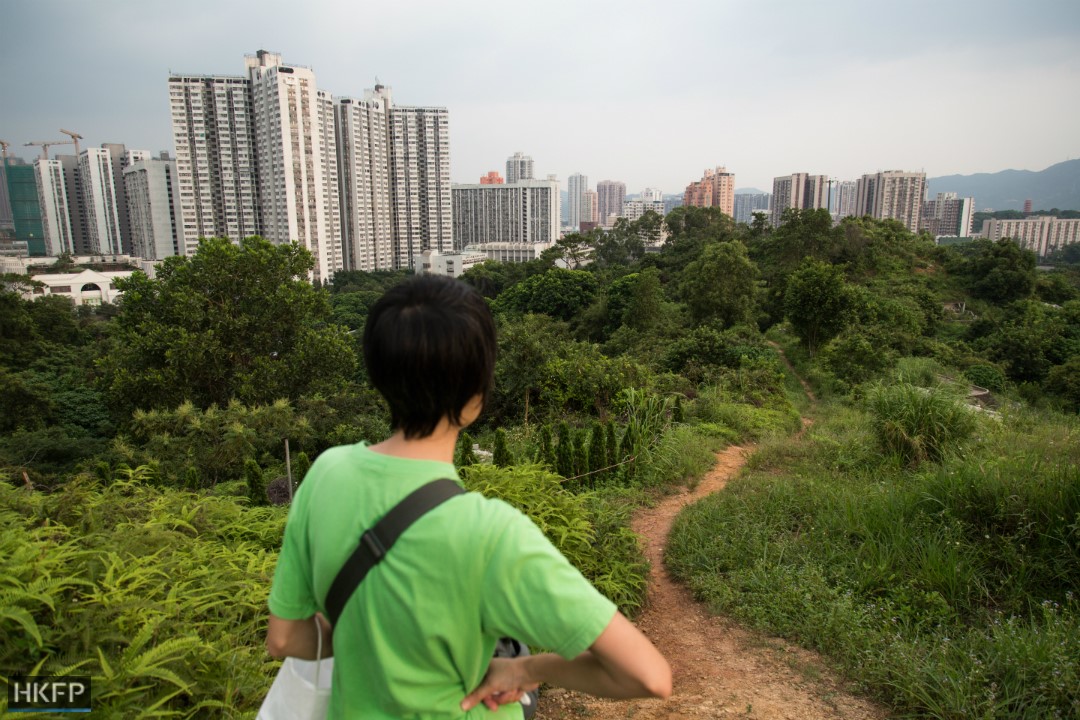 Ms. Cheng looking out to a hillside that might soon be flattened. Photo: Stanley Leung/HKFP.

“We are just humble citizens, we do not have a voice,” Chung said. Now that activists and lawmakers have finally spoken out for Wang Chau, Chung said he felt the sinking hopes of the villagers “have finally latched on to the edge of a lifebuoy.”

In Pictures: At the centre of a political storm, Wang Chau villagers face eviction but hope for justice