At a meeting in Beijing last week, the Cyberspace Administration of China (CAC), the country’s umbrella agency for internet regulation and control and related security matters, called together more than 60 representatives from state-run websites and commercial internet portals to hammer home, yet again, a tough message on information controls.

According to Hong Kong media reports, the CAC told those present that from this point forward a system of “editor-in-chief responsibility” (总编辑责任制) would be in force at priority websites, meaning authorities would hold senior staff directly responsible for news stories and other content that violated censorship guidelines. Strengthened internal discipline, the CAC said, must be practiced on a “24/7” basis (7×24小时值), leaving no gaps for editorial breaches.

This tough line may in some respects sound like familiar old stuff. Seasoned observers of Chinese internet policy will likely recall Hu Jintao’s campaign 10 years ago for a “civilised internet,” which came with a self-discipline pact from major commercial internet portals — and coincided with a moral rectification program called the “Eight Honors and Eight Disgraces” (八荣八耻).

But these actions under President Xi Jinping are part of a far more serious push to strengthen Party control across media platforms, smothering potential channels of dissent, broadly defined, while allowing just enough oxygen to sustain what the leadership regards as a healthy cyberspace.

Since last month, a number of innovative offerings at internet portals — often special columns taking an in-depth, explanatory or investigative approach to news and current affairs — have been shut down. Examples include Sina’s “News Dig” (新闻极客), its motto “digging out the truth” (挖掘真相), and Sohu’s “People In The News” (新闻当事人).

These and other programs were creative and popular ways for internet portals to work around government restrictions that prohibited news gathering, orcaifang (采访), restricting them to aggregation of news reported by licensed mainstream outlets. The relevant restrictions here come from Article 16 of the 2005 Provisions for the Administration of Internet News, which state that websites disseminating news “must republish and release news and information from central news units, or from news units subordinate to provinces, autonomous regions or municipalities directly under the central government.” (For another look at this longstanding restriction, see our 2010 coverage of the censorship gaffe during the annual Spring Festival Gala on China Central Television.) 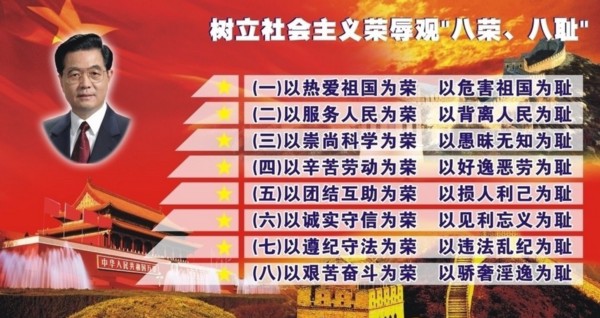 Now consigned to the trash heap of CCP purification campaigns . . . Does anyone remember the “Eight Honors and Eight Disgraces”?

Under Xi Jinping, China has moved to further systematise and legalise stricter controls on information across the board under a broad national security mandate. This, of course, is the raison d’être of the Cyberspace Administration of China, also known as the Office of the Central Leading Group for Cyberspace Affairs, chaired by none other than President Xi Jinping.

Adjustments earlier this year to the 2005 provisions on internet news were a big part of this, and they paved the way for this most recent push to more closely control websites and news apps. Changes made clear that websites must ensure they have an editor-in-chief at the helm of content operations — in other words, a head to chop off — and that this person must be a Chinese citizen. The changes even stipulated that website editors should not “twist headlines” — this an attempt to close the narrowest of gaps for creative suggestion (such as labelling as a “tragedy” rather than an “accident” a disaster involving potentially serious human error).

The CAC has topped off its adjustments to the 2005 provisions with a string of other regulations. One regulation taking effect on the first of this month demands that mobile apps require real-name user registration and keep 60-day logs of user activity. Another regulation, also effective August 1, tightens obligations on Chinese search engines to restrict and report prohibited content.

The CAC said last month that it was focusing its recent actions on Sina, Sohu, Netease, Phoenix Online and other major commercial websites because these had been home to “extensive legal and regulatory violations” (大量违法违规行为). The agency is also, however, targeting mobile apps and WeChat public accounts. This can be taken as a signal that the CAC is applying these restrictions with greater seriousness, making good on Xi Jinping’s pledge back in February to ensure all media, and not just trusted state media, are “surnamed Party” — in other words, that they adhere to the Party’s propaganda discipline.

Xu Lin, appointed in June as director of the Cyberspace Administration of China, replacing the controversial Lu Wei. Photo: QQ.

But as I’ve said before, Xi Jinping wants more than just control of media and information, and to re-assert the Party’s dominance over the message. He also wants to push innovation and mould China into an “internet strong nation,” or wangluo qianguo (网络强国). What does that mean exactly? It means an integrated strategy by which the Party can control and discipline the internet while at the same time building it into a booming creative enterprise.

Control and innovation must work hand-in-hand. Or, you might think of it this way: China’s internet must be leashed before it can be unleashed.

Looking back on the history of media and technology development in China over the past 36 years, one could argue that the Chinese Communist Party has suffered a series of shocks as it has sought to contain public opinion but at the same time accommodate global developments and maintain competitiveness. The political events of 1989 were understood in the aftermath as having stemmed in large measure from media control failures — from an excess of license on the party of Zhao Ziyang. The loss of the agenda in 2003, in the midst of SARS and the Sun Zhigang affair, was the culmination of a decade of media commercialisation as China sought integration with the global economy, and the result of the paradigm-shifting technology of the internet. The same holds for the advent of social media, including Weibo, which by 2011 were devastating the Party’s attempts (under Hu Jintao’s 2008 policies) to rein in commercial media and the internet.

This episodic loosening and tightening is not acceptable to Xi Jinping. He is working to integrate and converge Party control and media development. But don’t take my word for it. Here is the president addressing the Cyberspace Work Conference on April 19 this year:

In our country, more than 700 million people are online, so of course this necessitates management. . . . Enterprises must take on their responsibility; the Party and the government must take on their responsibility. Neither side can relinquish its responsibility. Websites must have primary responsibility for the management of online information, and government administrative departments must strengthen their oversight. Departments in charge must establish close coordination, avoiding the situation we have often had in the past, in which “as soon as things are loosened chaos results, and as soon as things are controlled death results” (一放就乱、一管就死). We must travel a new path of concerted effort and positive interaction (齐抓共管、良性互动).

It is this marriage of control and innovation, this “new path of concerted effort and positive interaction,” that distinguishes Xi Jinping’s media policy from that of his predecessors. Yes, this has always to some extent been implied: the Party has sought to maintain strategic control politically and ideologically while encouraging development. But in this case, Xi wants to place the Party at the centre of innovation, whether that innovation involves control mechanisms or new technologies and products.

The Party wants a stake in the entire process of media and information — and in some cases that means an actual holding of shares. 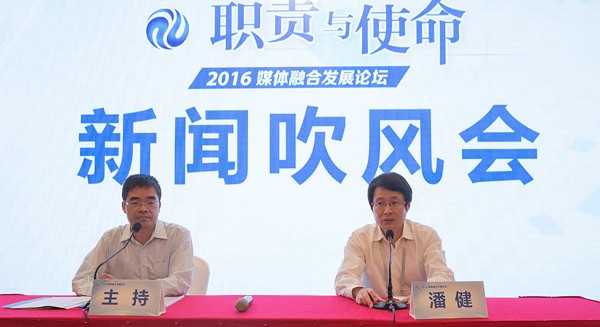 Representatives from Party and government offices, and from major internet media, meet in Shenzhen for the 2016 Media Convergence Development Forum from August 21–22.

This convergence of control and innovation can be readily seen at Shenzhen’s “2016 Media Convergence Development Forum,” held this week against the backdrop of this most recent crackdown on programming at major internet portals.

The theme of the forum, hosted jointly by the official People’s Daily and Shenzhen’s municipal Party committee, is “responsibility and mission” (职责与使命), a reference to President Xi Jinping’s February 19 media speech, in which he said:

This “responsibility and mission” is the convergence of control and innovation. As Xi Jinping said in the same speech, all media are “surnamed Party,” and all must follow the Party’s line. But it is not enough to avoid committing fouls. Media must steadily seek product innovation as well, ensuring not just the dominance but the attractiveness of “the Party’s news and public opinion.” 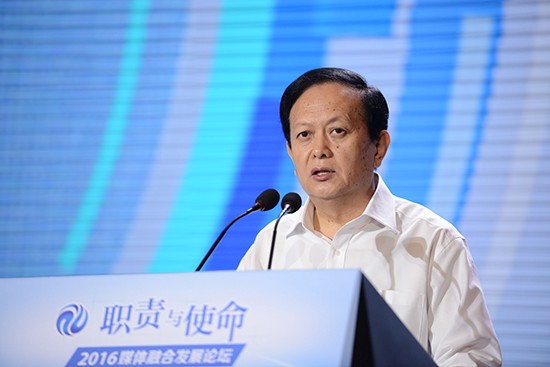 Speaking at the convergence forum on Monday, People’s Daily editor-in-chief Li Baoshan (李宝善) said that “in the internet age, the rapid development of digital communication technologies has profoundly changed the pattern of information transmission,” whether this meant “mobile over desktop consumption” or a content production environment in which “everyone has a microphone.” This, said Li, posed an “immense challenge to mainstream media,” or zhuliu meiti (主流媒体), by which he meant the dominant Party-state media.

One important answer to this challenge is intermarriage, not unlike the ancient practice of the “peace marriage,” or heqin (和親), in which emperors arranged nuptials between members of the royal family and sovereigns of neighbouring states.

And so, a reported highlight of the Shenzhen forum this week was the official launch of the China Media Convergence Cloud (中国媒体融合云), described by official media as “an important component of a strategic innovation agreement signed between the People’s Daily and Tencent.” The “convergence cloud” aims to “provide all media partners with various functions such as new media content provision, big data operation (大数据运营) and artificial intelligence, resolving in a single service (一站式解决) the challenges of technology development . . . and breaking through convergence bottlenecks.”

This tie-up between the Chinese Communist Party’s flagship media group and the private operator of the Chinese messaging super-app WeChat, is one step in a larger push to centrally produce mobile internet content. 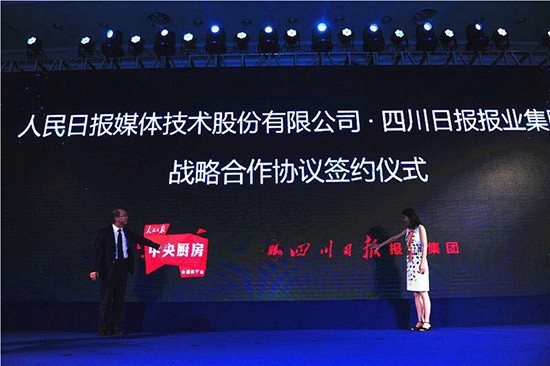 This follows a spate of coverage back in April this year in which official state media, including China Central Television, talked about the development of the “central kitchen” (中央厨房), or media hub, approach to news and content production, including the maintenance of “an archive of convergence media material to be shared and jointly used for new media news editing and production.” The People’s Dailybegan developing its “Media Hub” (中央厨房) in 2014, and formally launched the service on February 19 this year. That’s right, the “Media Hub” was launched on the very day of Xi Jinping’s all-important speech on news and public opinion work.

Addressing the Shenzhen forum this week, Ren Xianliang (任贤良), the deputy director of the Cyberspace Administration of China, said that “persisting in the development of [media] convergence required the steady strengthening of internet thinking (互联网思维), and the exchange of experiences.” At its base, of course, that thinking had to accord with the Party’s priorities.

”Media convergence,” said Ren, resorting to one of the oldest media control phrases in the Party lexicon, “must persist in correct guidance.”

An unholy marriage? How Xi's China is seeking to combine media control and innovation