Local residents have responded to the city’s marine refuse problem, initiating their own cleanup campaigns, while the government blamed floods in China for the phenomenon.

An “unprecedented” amount of trash that appeared along the harbours and shores of Hong Kong over the past week has alarmed residents and environmentalists, and social media has been flooded with pictures of beaches lined with litter. On Tuesday, the Environmental Protection Department told a resident who complained about the influx of trash that the Marine Department was “in a better position” to handle their enquiry.

The Marine Department then responded with pictures of a clean, relatively trash-free Pui O Beach on Tuesday. However, the Sea Shepherd Conservation Society’s Director for South East Asia Gary Stokes slammed the government for going to the beach during high tide and posted pictures of the same beach littered with rubbish the following day. 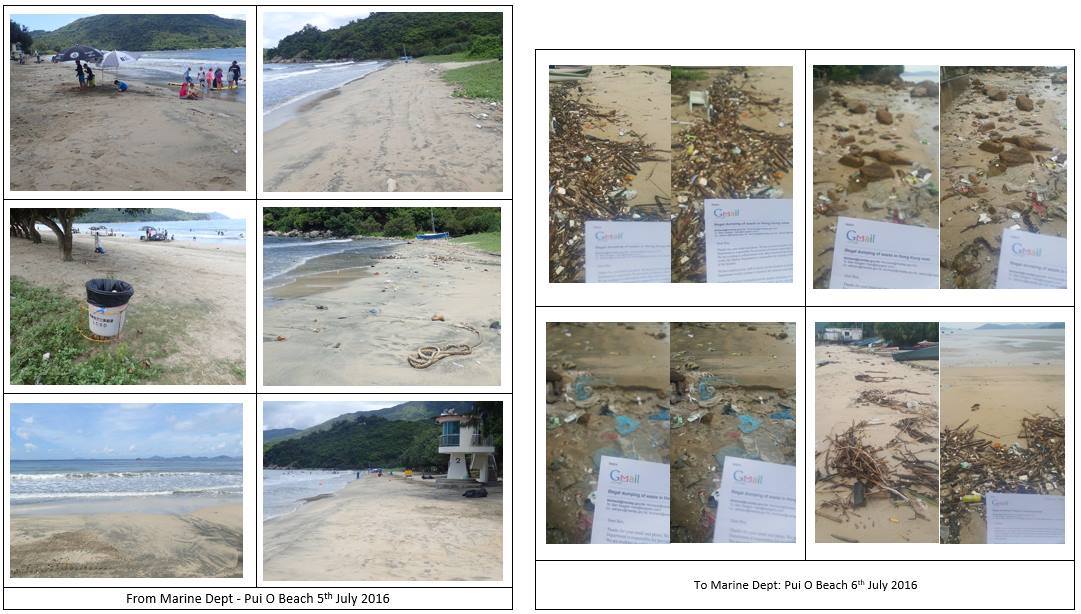 The Environmental Protection Department later told the South China Morning Post that the rubbish – six to ten times the usual amount – was a result of heavy rain and floods in the Pearl River basin. However, it did not appear to have given details of any plans to tackle the problem.

Meanwhile, local residents have taken the matter into their own hands and initiated their own projects to save the environment.

The Lamma Book Club will be holding a cleanup from 10:30am to 12pm this Saturday at PowerStation Beach, Lamma Island, while a beach cleanup day hosted by 3SoulSurfer will take place from 2pm to 5pm on July 10 at Big Wave Bay, the group’s “home break.” The Save Aberdeen Harbour Alliance will also be holding a “Fish for Trash” harbour cleanup day on August 6.

In a separate campaign, The Hong Kong Hiking Meetup has initiated a petition asking Secretary for the Environment Wong Kam-sing to implement a refundable deposit on plastic drink containers. The petition began on Tuesday and has so far collected 269 signatures. The petition highlighted Hong Kong’s trash problem and said, “Over 2,000 tonnes of plastic is dumped in Hong Kong each day (that’s 730,000 tonnes a year) and only 83,000 tonnes per year is recycled. That means more than 600,000 tonnes is added to landfill or the landscape every year. A Container Deposit Scheme will help to increase recycling and provide an income source for low income earners.”

Sea Shepherd’s Gary Stokes said on Tuesday that the situation at Nim Shue Wan beach was “insane,” and that the majority of the trash was from mainland China.

However, he also added later that there was a need to build a picture of the trash across the whole of Hong Kong, and that some of it was local whilst some was from the mainland.

“Hong Kong creates more trash per capita than anywhere on earth – our track record on recycling efforts and cleanliness are dire,” he said.

“Just one look at the Aberdeen Harbour clean up two weeks ago highlights how much trash we are carelessly dumping into our own harbour to be swept out to sea or dumped on North Lamma beaches, yet nothing has been done even though it’s staring everyone in the face.”