Protesters rallying in support of returned bookseller Lam Wing-kee have expressed concerns over their personal freedom and anger at the Hong Kong government in light of Lam’s statements about his eight-month detention on the mainland.

At Saturday’s rally, over a thousand protesters marched from the Causeway Bay Books bookstore to the China Liaison Office in Sheung Wan, rallying around Lam, echoing his shouts of “say no to authority!” and “Hong Kong has a baseline!”

“My friends and I thought it was absolutely necessary to come out this time,” said Aldo Siu, a woman in her 40s who periodically attends protests. Aldo Siu, a marketer in her 40s at the march. Photo: Catherine Lai.

“It’s very scary. If someone in your family suddenly disappeared and all you got was a message from them saying ‘I’m safe, but don’t contact me’, that’s ridiculous.”

She said she was disillusioned with Hong Kong, “because the Hong Kong government can’t do anything at all. All of our high-level politicians are completely useless. They have to listen to what the Chinese government says for everything.” 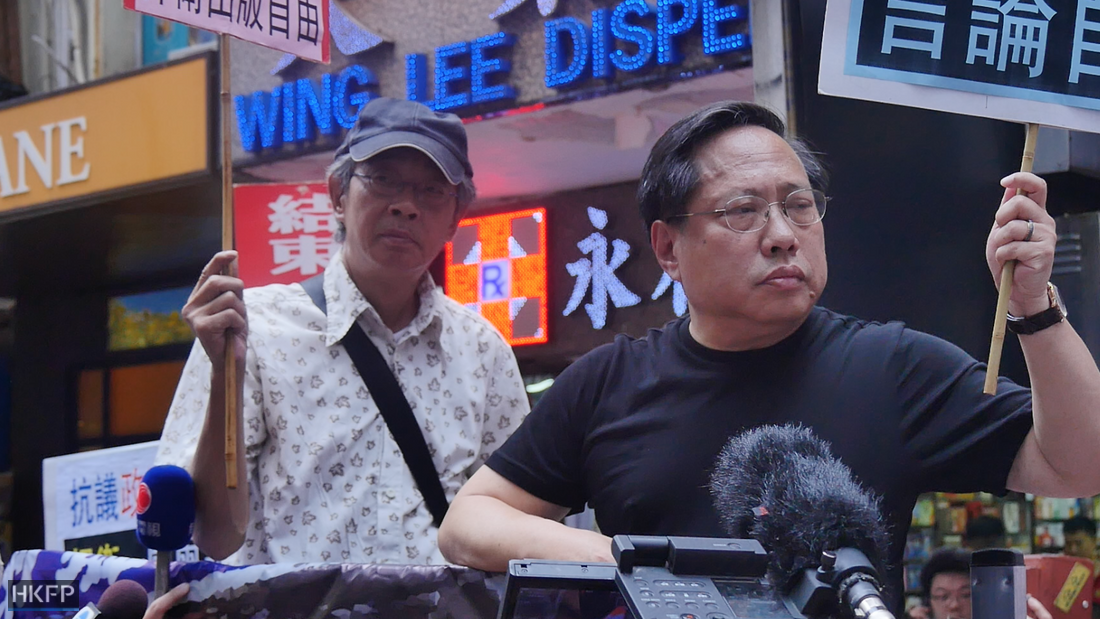 Suzanne Wu, Chairperson of the Labour Party, said the Hong Kong government should investigate the legality of Lee Bo’s case.

“You can see from the fact that Mr. Lam went to a councillor for help and not the police – that our law enforcement system has already lost its ability to safeguard our citizens,” she told HKFP.

“If we don’t hold them legally accountable, [what happened to Lam] will only happen again and again.” Debbie Chan, a post-graduate student in her 30s, said she came out because “everyone saw Mr. Lam’s press conference and thinks he’s very brave. He’s not worried about his personal safety. Like he said, what happened to him will happen to every Hong Kong person.”

“Usually political changes in Hong Kong happen gradually, but the Causeway Bay Books incident was a big blow to One Country, Two Systems. It shouldn’t be Mr. Lam speaking out alone under such danger… each one of us should help out,” said Chan. The Frontier’s banner, which says “If we don’t fight today, we’ll be on the chopping block tomorrow.” Photo: Catherine Lai

She said she was not worried about her personal safety at the moment, but said she is very careful when posting about political topics on social media, as most of her posts discuss political issues in Hong Kong and China.

Mr. Lee, a retired businessman who still operates factories on the mainland, declined to have his picture taken because “I’m not exactly scared, I just don’t want any trouble.”

“This huge thing has happened,” Lee said. “Leung Chun-ying should come back from his vacation.” Hearing the Chief Executive’s name, another protester interrupted: “He wouldn’t come back even if people were dying!” she said.

“This is an irresponsible government. They ignore the wellbeing of the Hong Kong people for the sake of their own benefits and positions,” Lee continued. The Frontier political party carried a yellow banner that said “if we don’t fight today, we’ll be on the chopping block tomorrow.” Thomas Yan, the party’s convener, said the slogan on their banner expressed a common sentiment among Hong Kong people.

“We must not agree to what they’re doing,” said Yan. “If we don’t push back, we won’t have a future.”

“I’ve never worried about my personal safety. I’m so old already. If we are scared, our children and grandchildren will be even more scared. We have to do this for them, so they don’t have to come out and protest like us.”