The red handed tamarins started gathering on ropes around trainer Wesley Yip as soon as they saw him with a skewer carrying cucumber, cherry tomatoes, carrots and a strawberry. They fidget and climb over each other for the best spot as Wesley adjusts the rope holding the skewer and ties it up to hang from a high branch.

Once he lets go of the skewer, the tamarins try to snatch the fruit for themselves. One grabs the rope, managing to pull the food close enough for a few bites before it is snatched away by others. One tamarin chews off a cherry tomato from the skewer and shares it with another.

Ocean Park houses more than 9,843 animals, as of June 30 last year. The tamarins belong to the Rainforest Why Zone, where trainers are available to explain animals both in the wild and in captivity.

Yip, who joined Ocean Park five years ago, is a Terrestrial Mammal Trainer responsible for taking care of the tamarins, along with other species.

What he tied to the branch is called an “enrichment food” – a puzzle-like toy made of foods that are meant to enhance the animals’ abilities. “In the wild, animals don’t need enrichment, because the challenges they experience in the wild are already an enrichment. But when the animals are in Ocean Park, we hope that we can give them opportunities they have in the wild… excitement, chances to find food” said Nelson Wan, the Supervisor of Terrestrial Life Sciences Department who joined Ocean Park ten years ago. Part of Wan’s job is to design enrichment foods for the animals after consulting with trainers.

Enrichment foods are designed by first assessing what abilities the animal should have in the wild and how the animal in captivity compares. Aspects such as how they prey upon other animals, what their family structure is like and how often they are active, are examined and a toy is designed to help them hone skills which the trainers think should be developed.

Animals could be healthy, but unfit, Wan says. When that happens, the enrichment team will try to design ways for the animals to be active while they eat. “For example, the skewer we saw, we hang it up instead of letting the animal pick it up from a bowl and put it in its mouth. They need to climb trees, use their legs to hold on to the branch, and need to keep their balance, and if there are too many underneath [the skewer] those higher up might need to hang upside down. They will use different muscles,” he said.

“If the number is limited, if it’s food that they especially like, we’ll add these elements so that the tamarins know that if they don’t go and fight for the food with everyone else, the next second it may be all gone. Maybe [they] like to eat cherry tomatoes, but there’ll only be cucumbers and carrots left. At this time, we’ll be able to see their social behaviour,” he added.

“Does the toy fulfill our goals? If it does, is there room for improvement?” Animals may get tired of the food offered or the toy, “so we need to review whether the frequency needs to be shorter… [S]o maybe we use 13 different types of food rather than just three, but only offer them three kinds each time. So we can offer change and they will remain interested. The length of the rope will also alter difficulty,” said Wan.

There is about a 50/50 probability of the animals not engaging with a newly created toy. “We may have to demonstrate how to play with the toy in front of them,” said Wan. Left to right: Wesley Yip and Nelson Wan, discuss animals in the enclosure.

“We also care about safety with the accessories that we use… if there are holes, it is either one that is small enough that they cannot get through, or one that is large enough for them to move through freely.” said Nelson

Animals engaging with enrichment foods also attracts people to the enclosure. “The tourists really like to see these special behaviours,” he said.

As the tamarins gather around the skewer trying to grab the food, several tourists stand by the bridge, where they can look down onto the tamarins, to watch the action.

The pygmy marmosets are in an enclave next to the birds, a small indoor enclosure filled with branches placed strategically to mimic trees.

Their toy is a bell pepper, with the top cut open and held together by a bamboo stick and carrots. Worms are placed inside the bell pepper and Wesley hangs it in the enclave. The marmosets are cautious, and dare not approach the bell pepper immediately. Yip leads them towards the toy with one of their favourite foods: worms. One by one, they slowly move towards the bell pepper, peering at it to see if there is anything suspicious. Satisfied that there is nothing out of the ordinary, one of the marmosets puts its hand inside the vegetable to fish for the worms.

He places another blueberry on the plate, and this time the Green Aracari flies to him. The bird takes the blueberry but it doesn’t swallow. Instead it calls for its friend, the Emerald Toucanet. The next time, it swallows two and holds one in its beak again. Again, it calls for its green companion.

When the two meet on the ropes, the bird passes the blueberry to his friend, which receives it with its beak. The black bird then coughs up the two blueberries it has swallowed and passes them to his friend.

“Their social relations may not represent conversing, but there are some very nuanced relationships between them, like the two toucanets. It’s usually a win-win relationship,” said Wan.

The three birds work with each other within their species, and also with other species.

“You can see that they are quite noisy, they rely on vocals to communicate, to alert others to dangers and fly together. So you see them chirping all the time.”

The marmosets have learnt to take cues from the birds, acting accordingly if the birds react to danger, said Wan. The birds, likewise, also take notice of the tamarins, who are right below them next to a family water ride called “The Rapids”. But each animal is also different. “We have nine tamarins and actually they have different personalities, just like us. Actually they are one family – mom, dad, and seven brothers and sisters. The mom and dad usually are the head of the family and they usually eat first… [T]he smallest is the most domineering,” said Yip. “It can take other [tamarins’] food. It can take the mom’s and dad’s food, but others cannot do this… There are different preferences. Some like to eat bananas, some like cherry tomatoes… many different things.” 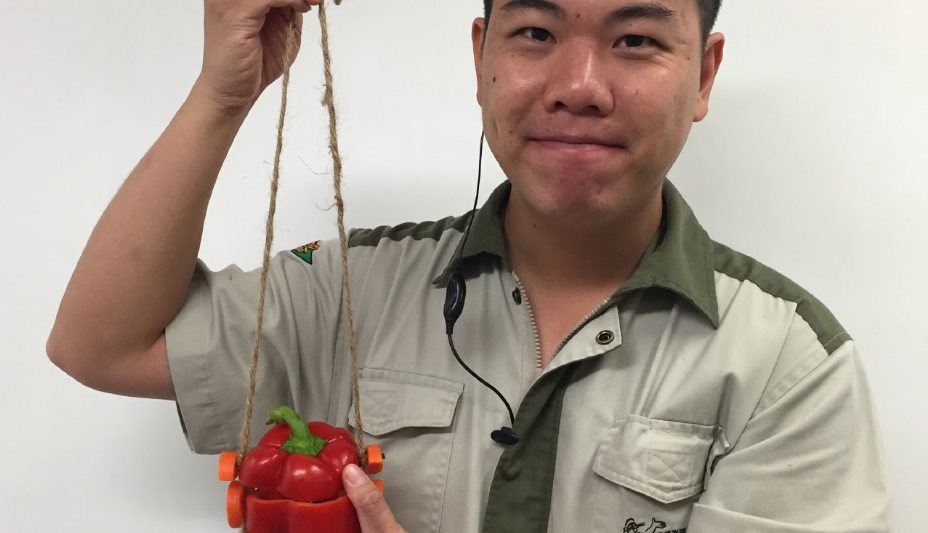 “There are definitely allergies to food, but so far we have not met any such cases,” he added. He also said that trainers will consult vets before any food is given out… “If there might be problem, we will not give the food to them.”

“We try to give [the enrichment puzzle] to them so that they have better animal welfare – the best welfare,” said Wan.

Recreating the challenges of life in the wild: Ocean Park's 'puzzle games' for animals