Zhang Dejiang’s short visit (or inspection) has told us that Lantau is not just a big deal in Hong Kong. It’s a pretty big deal in Beijing, and an even bigger deal for CY Leung’s reelection (or “reelection”) strategy.

The Development Bureau was the first place on Zhang’s official agenda, which soon became well-known to Hong Kong thanks to this photograph of the VIP inspecting this hefty 3D visualisation of the Lantau plans… Local media and environmental groups rightly complained that this hadn’t been shown in the just-completed public consultation and that it appeared to show reclamation in areas not previously disclosed.

Development Secretary Paul Chan responded that it was a mock-up for the benefit of the visitor and that nothing had been hidden. This is basically true: LanDAC came up with the idea two years ago of joining Hei Ling Chau, Kau Yi Chau to form the East Lantau Metropolis (ELM), connecting to Mui Wo at one end and Hong Kong Island at the other. That’s pretty much what the model shows. 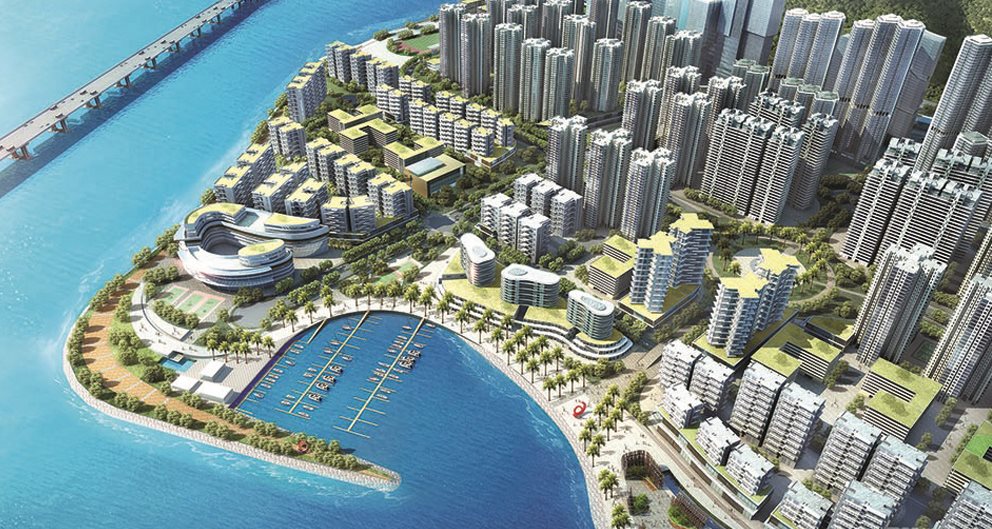 But there are a few things to unpack from this single incident.

First and most obvious: does Paul Chan really expect us to believe he rushed this Beijing potentate from the airport in order to see a 3D-printed model of a merely possible Lantau plan?

As this blog has pointed out, the Lantau development process is heliotropically targeted on a single outcome. The consultation and even the formal planning as just box-ticking exercises. The intended outcome was clear from the early days: extra housing in Tung Chung, mass tourism in Disneyland and South Lantau and, the crowning glory, the ELM. When the final blueprint comes out later this year, that’s what it will show.

So Chan is being disingenuous, recalling his defence of LanDAC committee members and their Lantau business interests. According to Chan at the time, as mere members of an advisory committee, this didn’t matter. But since we don’t know the advice they gave, or the advice that was accepted, it’s an empty claim. And as we have seen, the government is not treating LanDAC’s proposals as advice – it has accepted them whole cloth.

But in any case if the 3D model is indeed a mock-up to aid understanding, why not show it to the public during the consultation? It wouldn’t have gone unappreciated.

It just reinforces that Hong Kong people are superfluous to the process.

It also illustrates that there is nothing local bureaucrats won’t do to please our Beijing overlords. In fact the most interesting part of this little flap is confirmation that the whole Lantau palooza is central to Hong Kong’s s relationship with Beijing.

Sure, we already know Beijing loves nothing more than building roads and bridges, though not necessarily where they are actually needed.

But in an unusual move Chan’s office released a video of him explaining the Lantau plan in front of Zhang, CY Leung and the 3D model. It’s rare we get to see local officials interacting with our sovereigns, so watching Chan presenting like a schoolboy has its own kind of fascination. At one point he even bows.

Through this excruciating encounter we can see CY Leung positively beaming. If he ever experiences sheer joy this is what it must look like. He knows is on a winner with Zhang and Lantau, and both are critical to his chances of remaining CE.

As head of the Communist Party ‘leading group’ on Hong Kong and Macau, Zhang’s is probably the single most important opinion on the SAR outside Xi himself, hence the priority viewing of the Lantau model. He was also Guangdong party secretary from 2002-07 where, besides presiding over the SARS disaster and the unfortunate shooting deaths of unarmed protesters he was one of the main sponsors of the Hong Kong-Zhuhai-Macau Bridge.

Never mind that its expensive pilings are sinking slowly into Tung Chung Bay. The bridge is the spark for the Lantau goldrush. Zhang is clearly impressed they’ve balanced his white elephant on Lantau’s north coast with an even grander one off the south coast and wrapped it in a narrative about “solving” our land and housing woes.

Leung and Chan won Zhang’s on-camera praise for their “fine plan,” which explains the release of the video.

Cue the outbreak of joy on Leung’s lupine face.