The artists behind a public protest art piece displayed on the facade of Hong Kong’s tallest building have slammed the Hong Kong Arts Development Council for terminating the work early and for releasing a statement which they say was “ungrounded”.

The “Countdown Machine” began last Tuesday evening – the day Zhang Dejiang, China’s No. 3 official, arrived in the city. For one minute every night until June 22, the artists planned to transform the sides of the International Commerce Centre (ICC) into a countdown timer ticking down July 1, 2047. The date marks the official end of Hong Kong’s One Country, Two Systems agreement, which guarantees its autonomy. The project was put together by artists Sampson Wong and Jason Lam of the Add Oil team. However, on May 22 the Chairman of the HKADC’s Film and Media Art Group Ellen Pau and curator for the exhibition Caroline Ha Thuc released a joint statement announcing that the work would no longer be part of the exhibition. It said that the title and statement of the work – originally entitled “Our 60-second friendship begins now” – was changed without consulting the curator or HKADC and also criticised the artists for their “disrespect”. 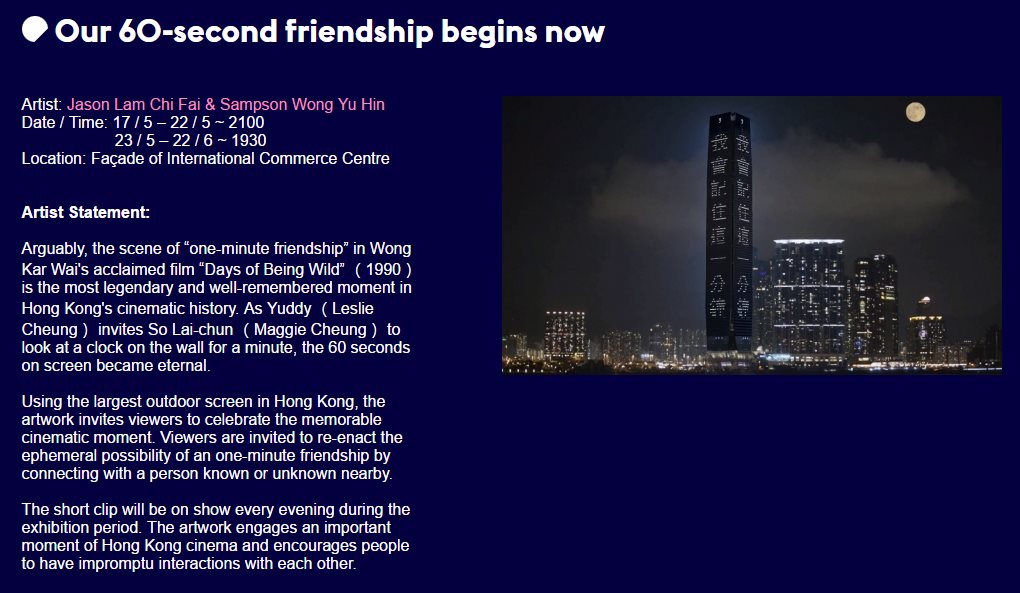 The artwork as pitched by the Add Oil team to HKADC.

On Monday evening, Wong and Lam stated that the curator was in full knowledge that part of the original artwork involved a countdown to 2047. They said that no changes had been made since April, and that it was not in their power to change what would be displayed.

They also said that although the “Countdown Machine” – which began on May 18 and consisted of a website and a one-minute clip – was related to the original artwork, it was, at best, an interpretation or a recreation, but could not in any way alter the title and concept of “Our 60-second-friendship begins now”. Therefore, they said, there was actually no change in either the title or concept of the submitted artwork, as the HKADC had claimed.

Wong and Lam called the reason for removing the artwork “ungrounded” and said that banning it limited freedom of expression. They also said that the “unjustified and arbitrary removal” endangered the arts sector.

“The claim that ‘the artwork’s title and concept have been changed’ is an opinion of [HKADC], not a fact,” the artists said. “What really has changed is the reception of the said artwork from society at large. In other words, some people understand the artwork differently than before, and this made [HKADC] remove the artwork.”

“If [HKADC] believes in the freedom of artistic expression and supports artists, why did they remove an artwork from an exhibition on the imaginary grounds that ‘the artists have announced a change in the work’s title and concept’? If [HKADC] values mutual trust with artists, why did they not seek to understand the artist’s point of view first and review it judiciously before arriving at a decision?” the artists asked.