A report from the Airport Authority (AAHK) has said that an incident involving the Chief Executive’s daughter’s baggage last month did not violate any airport or international aviation security standards.

Leung Chun-ying allegedly used his position as Chief Executive to help his daughter bypass security procedures to retrieve forgotten hand baggage, though he has denied any wrongdoing. Airport staff members helped take the baggage into the restricted area for Ms Leung, prompting protests over security. The report said that the baggage passed explosive trace detection, its ownership was verified and it underwent security screenings as per airport and International Civil Aviation Organisation’s requirements.

The government said it attached great importance to airport security and that it agreed with the report.

“It was mentioned in the report that the AAHK, together with other stakeholders, would review and fine tune the existing handling procedures for lost and found items. The government agrees with this work direction,” a spokesperson said. 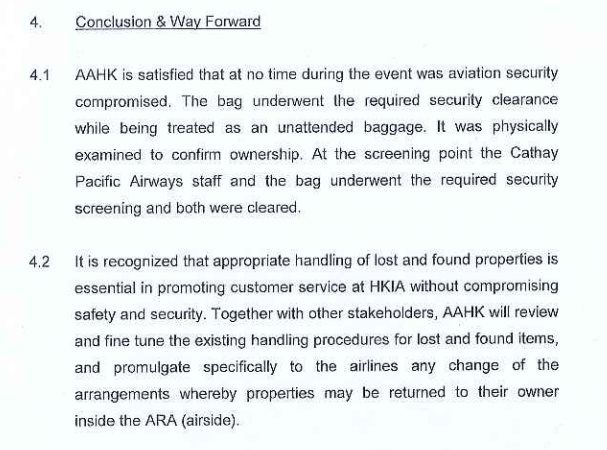 In response to the report, the Chief Executive stressed that he and his family did not exercise any special privilege and that no airport security requirements were breached during the incident.

“I also noted the report (para. 3.6) pointed out that AA has established procedures to handle lost property. There are precedents of providing courtesy delivery of found property, after undergoing necessary security screening, from the landside to its established owner in the Airport Restricted Area. The report pointed out that 517 courtesy deliveries of items were recorded from March 2015 to March 2016,” Leung said. Earlier on Monday, the Hong Kong Cabin Crew Federation demanded an urgent meeting with aviation officials, as it said its latest reply from the Civil Aviation Department (CAD) “outrightly avoided the questions and concerns” raised over the security procedures for dealing with left baggage in the airport.

Over 1,000 people protested on April 17th at the airport over the controversy.