In the sport of boxing, it is called leading with your chin—and the inevitable result is that the boxer so leading takes a wallop and winds up sprawled on the canvas.

The same is true—at least metaphorically—in what can be the equally brutal sport of politics: Those who openly take up vulnerable positions find themselves crushed, and the Hong Kong National Party may be about to learn this lesson the hard way. Indeed, if HKNP chairperson Chan Ho-tin doesn’t stop dropping verbal hand grenades every time he speaks, his party—whose founding he announced less than a month ago—may be the shortest-lived such entity in Hong Kong history.

Announcing the party’s formation at a one-man press conference on March 28, Chan deliberately pushed at the edges of the city’s legal protections for free speech when he called for the “abolition of the Basic Law”—the very constitution guaranteeing these protections—in a future, entirely independent Republic of Hong Kong.

If you listened carefully, you could hear Chinese officialdom hyperventilating all the way from the central government’s liaison office in Hong Kong to the corridors of power in Beijing.

The liaison office’s new head of legal affairs, Wang Zhenmin, was quick to brand such talk as “sedition” under the city’s Crime Ordinance, although he did not mention Chan or his party by name. A statement from the city’s Department of Justice, again without mentioning the new party or its leader, warned that it “will take such action as may be necessary” in cases that involve contravention of the Basic Law.

Clearly, however, Chan was undaunted by these admonitions as this week he announced that his party would soon be escalating their independence campaign by handing out flyers, holding meetings and forming book clubs on the subject. Finally, and most provocatively, he said that some form of “armed uprising” could not be ruled out in the future.

That last remark may very well turn hyperventilation and vaguely stated threats into concrete legal action against Chan and the HKNP.

Now even pan-democrats are getting nervous, with Lam Cheuk-ting, executive director of the Democratic Party, expressing fears that advocacy of independence could prompt a takeover of the city by the People’s Liberation Army.

Speaking earlier this week at a forum on the independence debate also attended by Chan, Lam compared Hong Kong’s current status in the eyes of the Chinese leadership with that of Taiwan, saying: “Taiwan has its own troops, and it is geographically separated from China. But why does it not dare to declare independence? It is because they know the consequence – there will be war.” For his part, Chan used the forum to drop yet another rhetorical bomb at the feet of central government authorities.

“Come to arrest me,” he taunted. “Come to take me back to the mainland like [bookseller] Lee Po.”

Be careful what you wish for, Mr. Chan—except there may be no need for any cloak-and-dagger abduction if you continue to give the Hong Kong government excuses to charge you with incitement.

There should be nothing wrong—legally or otherwise—with talk of self-determination or independence, especially when the conversation relates to the question of Hong Kong’s status once the handover agreement guaranteeing the city’s autonomy expires in 2047. Indeed, Hong Kong’s problematic future demands that this dialogue should take place.

But advocating “revolution” and raising the spectre of violence is asking for trouble while also undermining the very cause it purports to advance.

So far, the tactics of radical localists—who don’t seem to fathom how small their numbers are—have been wholly counterproductive. Thanks to their misguided efforts, dreaded anti-subversion legislation, forced off the discussion table by a 500,000-strong demonstration 13 years ago, is back in vogue.

Witness the 1,100-word op-ed piece by solicitor Eliza Chan published in the South China Morning Post on Monday under the headline “Hong Kong should reconsider enacting Article 23 legislation to nip support for independence in the bud.” 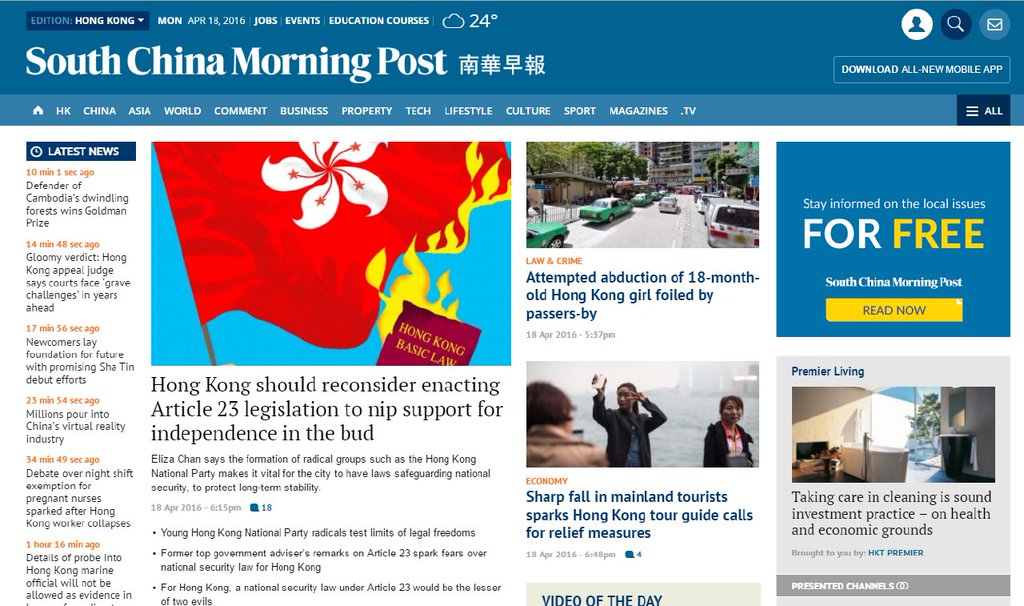 The emergence of radical groups like the HKNP are a “wake-up call” for the city, Chan writes, justifying the resurrection of a proposed law “to combat any promotion of Hong Kong independence, along with other secession, sedition and subversive activities that would be harmful to the city’s long-term stability.”

Thankfully, most people in Hong Kong do not agree with Chan. The strong comments her article elicited on the SCMP website are a clear indication of that.

Moreover, we don’t want articles like this one, nor the warnings and threats now being issued by politicians across the city’s ideological spectrum, to censor or otherwise inhibit the ongoing debate over Hong Kong’s future.

That debate needs to happen and is expressly protected by the freedom of speech enshrined in the Basic Law.

But let’s be smart, not stupid, in exercising that freedom.