Much has been written about the inequality of the functional constituencies in the Legislative Council (LegCo) in Hong Kong, but less attention is given to the intricacies of the electoral system of the geographical constituencies. With 2016 being an election year, it is worth revisiting the last set of legislative elections results from 2012.

To understand how parties manipulate the electoral system for their own gain, and how the election results may not reflect the number of votes won by each party, one must first look at the system itself.

Described by Jason Y. Ng as “bizarre, convoluted, and to the uninitiated, remarkably dull”, Hong Kong’s electoral system does take some unpacking. Currently, the 35 lawmakers in the geographical constituencies are elected via a system of party-list proportional representation, with seats allocated by the largest remainder method using the Hare quota as the quota for election.

We can use the election results from the 2012 LegCo elections from Hong Kong Island to see how this works in practice. The total number of votes cast was 330,776, and there were seven seats available. Using the largest remainder method, the quota for gaining each seat was 330,766 divided by 7, which equals 47,252 votes or 14.29% of the popular vote. Campaigners (back) for election candidate Judy Chan (not seen) of the New People’s Party hold placards as a campaigner for People Power (from R, in yellow) hands out leaflets Photo: AFP/Anthony Wallace.

In practice, due to the large number of parties which contest the LegCo elections, (there were 14 party lists for 7 seats in Hong Kong Island in 2012) many of the parties will fail to reach the quota and so will not win any seats at all. However, if a party receives more votes than the quota, the remaining votes are counted towards the next candidate on the party list. If the remaining number is high enough then a party may win two or more seats within a constituency.

The interesting thing about the electoral system for the geographical constituencies in LegCo is that parties are permitted to submit more than one list in each constituency. This is despite the party-list proportional representation method, which allows parties to submit multiple numbers of candidates, up to the maximum number of seats available in each in constituency. This has led parties on both sides of the political divide to submit separate lists within the same constituency in search of more seats, with mixed results. The two constituencies with the most interesting results in the 2012 LegCo elections were Hong Kong Island and New Territories West, so I will focus on those two sets of results.

Due to the odd interpretation of party-list proportional representation, the DAB fielded two separate lists in the 2012 LegCo election in Hong Kong Island. The two lists received 33,901 and 36,517 votes respectively, which were remarkably close numbers. Because of this, the DAB was able to be represented by two lists in the top seven lists on Hong Kong Island, giving them two seats. This was despite them receiving fewer votes than the largest party, the Civic Party.

Had parties only been able to field one list in each constituency, the Civic Party would have won two seats in Hong Kong Island. Due to the largest remainder method, the second candidate on the Civic Party list (Tanya Chan Suk-chong) would have had 23,223 votes, outstripping the votes from the second candidate on the hypothetical single DAB list (with 23,166 votes) and the next closest party (People Power with 18,667 votes). The system delivered a grossly unjust result in this case.

In the New Territories West constituency, the Democratic Party also ran multiple lists, with disastrous results. The Democratic Party fielded two lists, receiving 25,892 votes (5.2%) and 32,792 votes (6.59%) respectively. Despite this, they failed to win any seats, as neither one of their lists placed in the top nine of lists in the constituency. 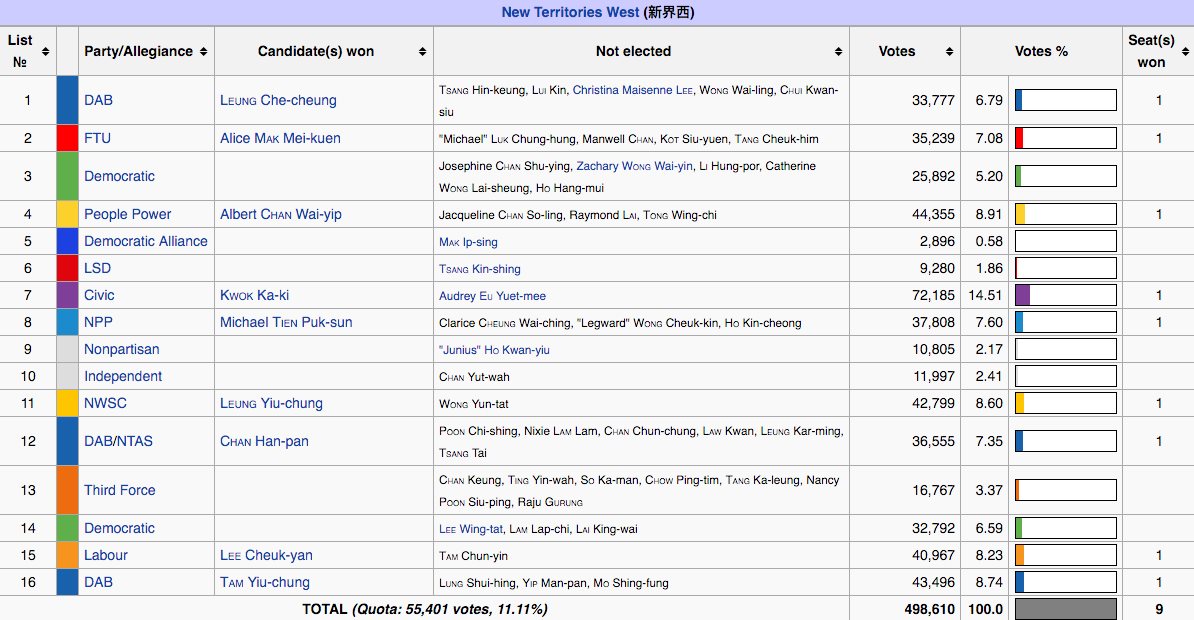 Had the Democratic Party fielded one list, they would have received 58,684 votes (11.77%), easily placing them in the top nine and gaining one seat. In contrast, had the DAB only been allowed to field one list (they fielded three), they would have gained 113,828 votes (22.83%). This would have been enough to win two seats with a remainder of 3,386, far short of the three seats that they gained by fielding three separate lists.

What does this mean?

If parties were only able to field one list in each constituency, the current make-up of the geographical constituencies in LegCo would look remarkably different. Instead of 18 pan-democratic lawmakers versus 17 pro-establishment lawmakers, using the analysis of the election results above, a truer reflection of the elections would be 20 pan-democratic lawmakers versus 15 pro-establishment ones.

This analysis of the 2012 LegCo election gives strong grounds for electoral reform. The fact that parties can submit multiple lists in the same constituency on the one hand makes little sense, as parties are allowed to submit lists containing more than one candidate anyway, and on the other hand, it allows parties from all sides of the political spectrum to submit multiple lists in order to manipulate results and gain more seats than they should. Parties should only be allowed to submit one list per constituency. However, even if this particular issue were to be resolved, Hong Kong’s political system remains largely broken. If parties were restricted to one list per constituency, independents representing the interests of the largest parties in Hong Kong would start to run as de facto multiple lists of a party. In addition, even if the pan-democrats and localists were to gain a larger majority in the geographical constituencies, reflecting the wider mood of the population in Hong Kong, the functioning of LegCo still leaves much to be desired. The reality is that for bills proposed by the geographical constituencies, even though pan-democrats can routinely gain a majority in voting due to the 18-17 majority, legislation which is submitted to a vote by the functional and geographical constituencies is then vetoed out of hand. The political system remains a huge hindrance to the governing of Hong Kong and society at large.

What does all this mean for the 2016 LegCo election? Should large pan-democratic parties, including the Civic Party, try to attempt to manipulate the system by submitting multiple lists in the same constituency? The wild-card factor will be the presence of localist parties in the election for the first time. Many political commentators have already predicted that the localists will be a force to reckoned with, with a potential for a split in the pan-democratic vote, complicating matters for pan-democratic strategists. Submitting multiple lists in the same constituency is only a calculated risk worth taking if you can confidently predict that your party will win a large share of the popular vote in a particular constituency, something that the Democratic Party found out the hard way in 2012, with their split in New Territories West resulting in no seats won, despite gaining a significant proportion of the popular vote.

Despite this, the Civic Party should attempt to run separate lists in Hong Kong Island in the LegCo election of 2016. A few new pan-democratic and localist parties, including Joshua Wong’s Demosistō, have indicated that they will field lists in this constituency. However, the appeal of such parties, towards the extreme of the political spectrum, is limited in Hong Kong Island, as demonstrated by the relatively poor performances of People Power and the League of Social Democrats in 2012. If the leadership within the Civic Party feel confident about retaining around 20% of the popular vote in Hong Kong Island in 2016, the risks to fielding multiple lists are small. This would be a way to work within the unjust system, and prevent the DAB from winning more seats unfairly again.